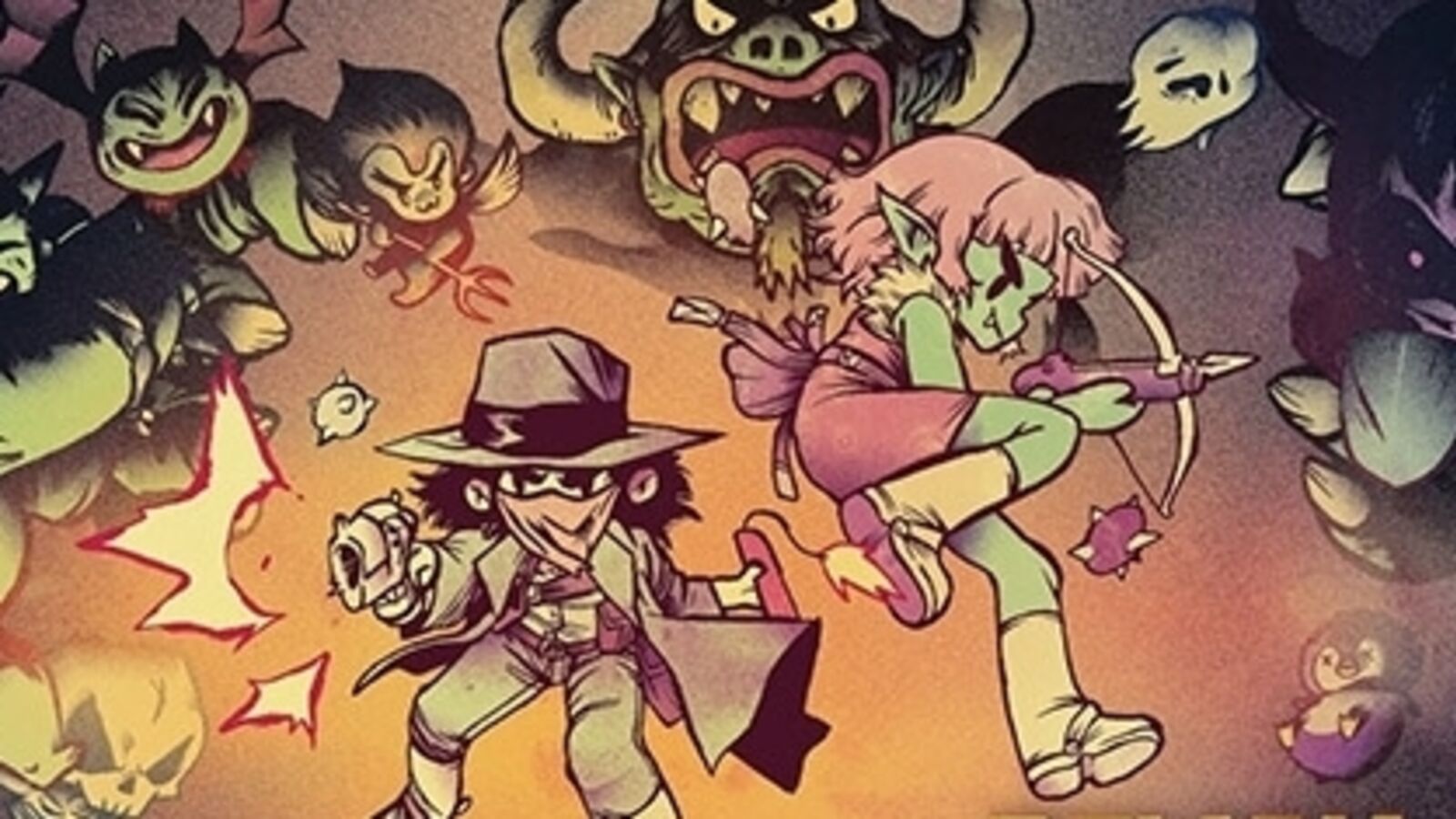 Demon Throttle should not work.

That’s not to say that the developers at doinksoft don’t know what they’re doing (they do, very much so) or that Devolver Digital doesn’t have a crack marketing team (they do, they really, really do). It is simply that the premise of Demon Throttle – a vertical-scrolling, 1942-style shoot-em-up with a pixelated aesthetic and tongue-in-cheek humor is all well and good, but to release it as a limited release, physical-only game in the year of our Lord two thousand and twenty-two? In an era where Game Pass is ever-present and cloud streaming grows in popularity, how could an extremely hardcore arcade game with retro sensibilities that only exists in hard copy take off?

These are questions that feel not only irrelevant but insubstantial after spending just minutes with Demon Throttle. Relentlessly replayable and honest-to-God funny, Demon Throttle is a truly modern arcade-inspired masterpiece. Demon Throttle, unquestionably, works. Those fortunate enough to own a copy should play it, master it, share it, but most of all: treasure it.

Discussing Demon Throttle is impossible without mentioning the elephant in the room: the game is physical only. There seem to be no plans to release Demon Throttle digitally; as it stands, the only way to play this game is to own a Nintendo Switch and to head over to Special Reserve Games to snag it. Worth noting is that Special Reserve Games physical editions of titles tend to sell out, and with good reason: they are (generally) limited printed runs of indie games that were originally released digitally. Those who manage to procure a copy of the game are in for a treat.

Special Reserve Games are always packaged beautifully, making the case for expanding the physical collection of a gaming library. Demon Throttle is no exception, sporting a gorgeous box that creates an instant rush of nostalgia for sitting in the backseat of a parent’s car and obsessively reading the back cover for any details of the game packaged inside. The boxes are numbered; apparently, this first printing is out of ten thousand copies (reviewer’s note: mine is number 1294). Best of all is the instruction booklet included with the game. A relic of a bygone era, this 32-page handbook is a handy guide and a fun tool with which to explore Demon Throttle.

There is something marvelous about turning the glossy pages to read character bios and *hot gameplay tips* that are not immediately intuitive upon starting the game cold. In-game tutorialization is a welcome trend, but it’s a fun throwback to have to read a little something to get the most out of a brand-new game. Diligent readers can even find a secret code in the booklet, furthering doinksoft’s commitment to the bit of a physical-only release. The long wait from the announcement last summer to this full release has been well worth it, particularly for collectors eager to flesh out their Switch shelf.

Right, but How’s It Play?

Of course, Demon Throttle is more than a collector’s display item; it is, in fact, a video game, and a damn good one. Doinksoft has cracked the formula for making an addictive “one more try”-style arcade shooter with plenty of texture and variety. Its throwback elements make perfect sense, but it’s the modern touches that will make Demon Throttle a classic.

An excellent opening cutscene introduces our two protagonists: the gunslinger, a cowboy with a score to settle (a demon kissed his wife!… or somethin’), and the vampire, an undead beauty tracking down her four stolen chalices. This unlikely duo must blast their way through four levels, overcoming countless demons and a Demon General at the end of each stage. Stages scroll vertically, and enemies descend from the top with recognizable attack patterns. Solo players will have to swap between the cowboy and the vampire to make their way through, while co-op partners can pick between the two and do their best to survive together.

Combat is fast and frantic. The cowboy fires his revolver in a straight line while the vampire has a spread shot. Both protagonists have a special as well–the cowboy can huck a stick of dynamite, blasting terrain and enemies to bits, while the vampire can fling magic arrows that target the nearest enemy. There are light role-playing elements folded in as well, as both characters can level up by defeating enemies to increase their attack power. Upgrades are scattered throughout every stage, increasing the chances for a critical hit or increasing movement speed. Scooping up items before the screen scrolls past them is anxiety-producing but also incredibly fun.

Pixel art may feel like the go-to for indie games, but the aesthetic works perfectly here. There is even an optional CRT filter to toggle, for those who miss the sheen of TVs from the 90s. Enemy designs are cute, like they stepped out of the Game Boy Color and onto the Switch (reviewer’s note: where the heck are the Game Boy Color games on Switch, Nintendo??). Boss fights feel appropriately epic, and there is hilarious banter between characters before every battle against a Demon General. The music is hype as hell, the perfect background noise to wreck enemy hordes.

Four levels may not sound like much, but Demon Throttle has plenty of tricks up its sleeve. Every stage has a hidden staircase randomly hidden beneath a destructible tile, and entering that staircase leads the player to a short bonus dungeon packed with powerups and a miniboss. Defeat the miniboss, and one of the four stolen chalices is procured; if the player manages to find the staircase in every level and defeat every miniboss in one run, there is a secret endgame bonus. That staircase placement is randomized is both frustrating and necessary, as it becomes near-impossible to perfect Demon Throttle in just a few playthroughs. It is possible to reach the final boss in less than half an hour, but that hardly means that this game is lacking in content.

Beyond the elusive “perfect run,” there is much to accomplish and unlock. Meeting certain secret criteria will trigger new NPCs to appear or add additional features to contend with. Once the Bestiary is found, players can find randomly find hunks of meat in a stage. Survive that stage with the meat intact and the player is treated to a short, simple, turn-based battle against one of that stage’s enemies. Defeating the enemy “captures” it, filling out its entry in the Bestiary for the player to read at their leisure. More importantly, doing so allows for a more powerful golden variant of that enemy to appear in levels, worth much more experience but significantly more difficult to defeat. Stages themselves have variants too, like rainstorms or darkness, making nearly every run feel unique.

Overall, Demon Throttle is surprisingly meaty. There is even a Hard Mode, unavailable at the start, for players demanding an even more stressful experience, and the game provides enough cosmetic rewards to uncover to keep players busy for a long, long time. The game is bursting with difficulty but remains satisfying all the way through. It is a game easy to revisit, the kind of experience to relish with glee.

Will Demon Throttle ever become something beyond a cult classic? By necessity, no. Even if all ten thousand hard copies are bought and loved, that’s a paltry number compared to some of Devolver’s other published games this year. But Demon Throttle is a testament to a developer and a publisher doubling down on an idea. Who knows–maybe Demon Throttle will inspire other publishers to take risks as novel as this one. And maybe, just maybe, the little instruction booklet will survive for another generation.