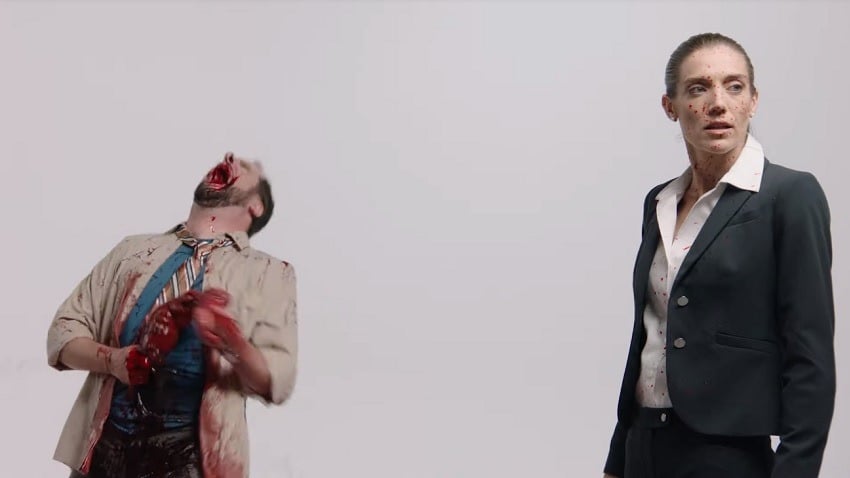 Comedy is tough; there’s no better example of that than during Devolver Digital’s E3 2019 not-a-press-conference presentation on Twitch, which included a short — and quite funny — pre-recorded sketch continuing the bloody and profane antics they established a couple of conventions ago, as well as a post-video “pre pre-show” streaming event that tried to horrifically murder all humor as we know it. Somewhere in that mix of that initial entertainment and later utter torture, the Devolver Digital Direct did remember where they were and what they were doing long enough to make a few actual game announcements(!), so for now, let’s focus on those:

Devolver’s amusing riff on the efficiency of Nintendo Directs kicked off with this trailer, which admittedly doesn’t show much. It’s a cinematic affair, but the gist of the game appears to be a Battle Royale-type affair that eliminates competitors via platforming, teamups, and even booby traps instead of normal combat. The idea reminded me a bit of Runbow, but on a much larger, more complex scale. It could end up a refreshing alternative to simply shooting everyone (and stood as a colorful and cheery contrast to the video’s smarmy, gruesome start), but this one’s still a ways off. Developer Mediatonic’s Fall Guys: Ultimate Knockout is slated to release for PlayStation 4 and PC sometime in 2020.

The Devolver Digital Direct’s overall vibes continued down a late-night B-movie path, so this game was a perfect fit. Carrion looks to approach the whole laboratory monster-on-the-loose setup by giving players control over the monster this time. Become a bloody mass of muscly pulp and stretching tentacles that goes on a violent rampage to presumably escape and terrorize the world! With what looks like the abilities to grapple horrified scientists, mangle them with your slithery arms, and absorb them into your creature’s blobbish body, Carrion looks like gory, pixelated, creature-feature fun that reminded me a bit of a more action-packed version of John Carpenter’s The Thing, which is a good thing to be associated with. Phobia Game Studio’s Carrion is thus far set to release on Steam sometime in 2020.

The Devolver Digital Direct was loaded with plenty of meta stuff already, so when they announced a bunch of cheap knockoffs of their own games as a way to capitalize on an untapped black market, it was hard not to think the whole thing was just another joke. It is, of course, but Devolver Bootleg is also real and is on Steam right now (you can even save 1% off the $4.99 price if you hurry!). With a cool retro look and eight off-kilter titles like Enter the Gun Dungeon, Hotline Milwaukee, Catsylvania, Ape Out Jr., Absolver, Luftrousers, Pikubiku Ball Stars, and Shooty Boots, this was one of the weirdest — and best — announcements from the presentation. Are any of these knockoffs actually fun to play? That might defeat the purpose, but you’re certainly welcome to give them some cash in order to find out. As stated before, Devolver Bootleg is available on Steam right now.

Enter the Gungeon: House of the Gundead

Not to be outshone by its low-budget bootleg, Enter the Gungeon is moving to the gaming space with the highest possible profile (and expense) — arcades. Enter the Gungeon: House of the Gundead is a two-player light gun game that looks to put your Gundead-blasting money where Devolver’s mouth is. For the low price of only $4,999.00, you can be the proud owner of a custom cabinet by Griffin Aerotech, which includes some sweet baby pink and blue plastic smoke wagons, “deluxe artwork,” and possibly buyer’s remorse. Otherwise, hit the arcades (wherever they are now) sometime in the first quarter of 2020 to mow down some Gungeon legions either solo or with a friend. Whether or not I’ll ever see one of these in real life doesn’t matter; it’s still cool.

Outside of these new game announcements, the Devolver Digital Direct also showcased this free expansion DLC to The Messenger, where everyone’s favorite ninja hits the sand for some fun under the sun. Along the way, he’ll face tropical island-themed foes, ride a skull boat, change the weather conditions to something a bit more stormy, and fight a giant octopus (naturally). This looks like a fast, colorful blast of sword-slicing action, and hey — it’s free! The Messenger: Picnic Panic is set to release July 11 for Switch, PlayStation 4, and PC.

Finally, we got another taste of the recent My Friend Pedro “Hype Train” trailer. If you haven’t seen this balletic display of gunfire already, you can check out the smooth moves below. My Friend Pedro is set to release for Switch and PC on June 20.

As for games, that was about all the Devolver Digital Direct could manage. Still, it often managed to be wickedly entertaining, so if you’re into the bloody saga of a fake executive, then by all means go nuts. Those who stuck around after for the “pre pre preshow” may have been hoping for more, but instead, we are treated to a misguided group of bellowing oafs who made nails on the chalkboard seem like a soothing alternative. If you made it over fifteen minutes into this train wreck, my hearty congratulations.