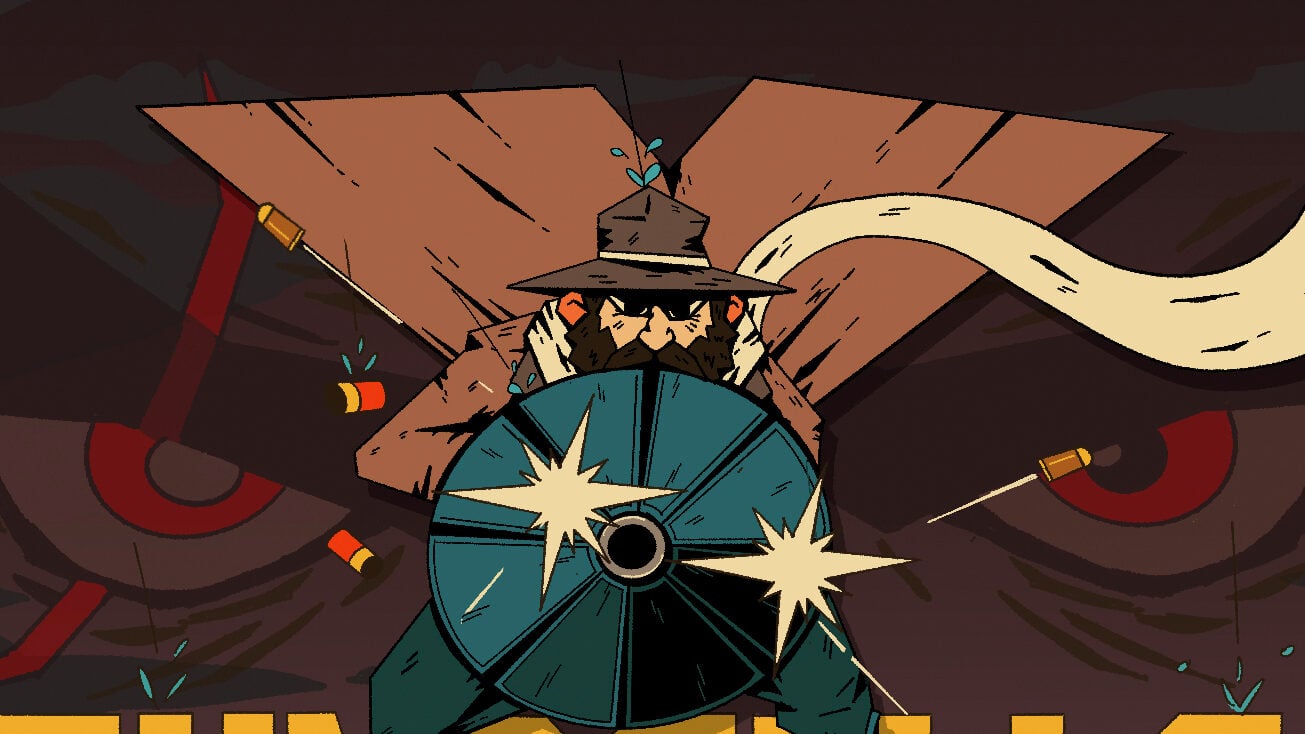 Who knows who’s going to be 2023’s Game of the Year, but when it comes to name of the year, it’ll be hard to beat Gunbrella. Indie developer doinksoft made their first big splash with 2018’s cat-centered minimalist metroidvania Gato Roboto before calling back to the days of physical-only releases with the arcade shooter Demon Throttle–and with Gunbrella, the Oregon-based studio is pursuing their darkest and most ambitious title yet.

This 2D action adventure title relishes in its noir-infused steampunk aesthetic, telling the story of a man adventuring through a corrupt world riddled with mystery, armed with a unique half-gun half-umbrella weapon. Fresh off a strong demo at the recent Steam Next Fest, Gunbrella is building anticipation–so we spoke with doinksoft gameplay designer Cullen Dwyer to learn more about this promising title, including its mechanics, worldbuilding philosophy, and what players can expect from its release next year.

This interview has been edited for length and clarity.

Goomba Stomp: Gunbrella centers around a combo that feels completely unexpected yet oh-so-right: guns and umbrellas. How did the original idea for the gunbrella itself first take shape, and what were the origins of the game as a whole?

Cullen Dwyer: It’s really hard to pinpoint where the idea came from. We were trying to come up with a fun mechanic years ago, and the idea of the gunbrella and its moveset immediately made us all say “yes.” After we finished the development of Gato Roboto, we were shopping around a few other prototypes that weren’t really speaking to us. That was when the gunbrella concept was revisited and turned into something closer to what it is now.

GS: Both from its trailers and its demo, Gunbrella evokes a strong noir-punk vibe. What inspired the game’s setting? Were there any games or other media that served as inspirations?

CD: The state of the world at the time gave more inspiration to the setting than other media. We all [doinksoft] live in the Pacific Northwest, so it’s raining all the time. There were also really bad wildfires, so it’s dirty and hard to breathe. There was a lot of civil unrest, and COVID-19 was becoming a thing, so there were crooked cops and a fear of the unknown informing the narrative.

For other media, a lot of location names are borrowed from dystopian novels–for example, Allendale is the name of the fictional town in “There Will Come Soft Rains” by Ray Bradbury. Of course, we’re inspired by our favorite video games too. Final Fantasy VII Remake came out during early development, and [doinksoft developer] Joseph and I both went, “Ah, well…”

GS: doinksoft’s last metroidvania, Gato Roboto, is a short and extremely sweet metroidvania clocking in at a few hours to complete. What’s the scope and scale that players can expect from Gunbrella?

CD: Gunbrella is definitely a bigger beast than Gato Roboto–to what extent is really hard for us to gauge sometimes, though. I think that it is at least twice as long as a playthrough of Gato, and much more narratively dense. A shared philosophy between the two games, though, is that it shouldn’t overstay its welcome. Gunbrella needs more time to breathe than Gato, so it’s longer, but it shouldn’t take up more of your time than it needs to.

GS: Gunbrella is quite a departure from doinksoft’s previous releases. Whereas Gato Roboto is a minimalistic and frankly adorable black-and-white adventure, and Demon Throttle is a arcade-y top-down shooter, Gunbrella is a much darker, grittier experience (but not without a sense of humor). What led to this shift for the studio’s latest venture?

CD: Generally, we like to try different things with each project. It helps keep our minds fresh and broaden our creative horizons. That being said, we’re really good at 2D platformers and seem to keep making them. If we had gone from Gato, a cute funny romp, to another game just like that, we would have gotten bored, especially since they’re both platformers, so we steered as hard as we could in the other direction. The game was originally much grimmer to the point where it was a bit depressing to work on, so we added in our signature goofiness here and there to lighten it up a bit, but yeah, it’s definitely grittier and certainly more violent.

GS: One of the most immediately striking things about Gunbrella is the feel of its moment-to-moment gameplay. The gunbrella is not only a tool for combat, but it also allows you to dash, jump, and dive through the world. What has been the process for creating this dynamic moveset based on the interplay of gun and umbrella?

CD: For us, it’s definitely an iterative process. We usually start our games with player controls, so that’s what we did. Then we did a pass of all of the things we wanted the gunbrella to do: shoot, block, glide, dash– as well as all the things the player can do: run, jump, wall climb, etc. Then we played it over and over again in test arenas and found bits that didn’t feel quite right–specific velocities, frictions, clunkiness, etc.–and fixed those. Then you’d be playing and be like, “Huh, nothing happens when you dash directly downward at the ground…” So we added pogo-ing, and so on and so on. The gunbrella is definitely the part of gameplay we’ve focused on the most, and even as we continue to develop, we are gently tweaking things to get what we want out of it.

GS: Another notable aspect of Gunbrella is its emphasis on storytelling. Even its short Steam Next Fest demo hinted at numerous sidequests and plotlines, along with plenty of optional dialogue to contribute to worldbuilding. What’s been the attitude behind world-building in Gunbrella?

CD: Especially since this game deals with people instead of cats, world-building was at the front of everyone’s minds. [doinksoft President] Britt Brady, when making either environment or character art, comes up with a lot of the raw world-building ideas. His process seems to be “Okay, we’ve got this junkyard hideout here… Who occupies it? What do they eat? How do people in the town next door feel about them? Who are their enemies? Do they know how to swim?” Then either Joseph or I take a lot of those ideas and start writing a scenario about it. There is a lot of brainstorming and arguing involved in how the scenarios tie into the main story and themes of the world, and it has been a very big undertaking.

GS: On the topic of the game world, Gunbrella’s demo already hints at a mysterious story covering themes of vengeance, corruption, and the supernatural. What’s the level of depth that players can expect from Gunbrella’s story? What major themes or messages are found in the narrative?

CD: I hope that people find Gunbrella’s story and narrative compelling, because we definitely put a lot of work into it. I think some big themes to expect are family, class disparity and mobility, and climate change, all nicely dressed up with supernatural abominations, odd factions, and police state dystopias.

GS: The sound design is one of Gunbrella’s defining features. From the ambient soundtrack that pulses in the background, to the sound of bullet shell casings clanking on the ground after each shot, Gunbrella’s audio goes a long way toward building its evocative atmosphere. What’s been the approach to Gunbrella’s sound design?

CD: Britt is the sound designer, and has been for most of our games. He has always had an acute attention to detail, and will go out of his way to record weird things for foley. He has a skillset and a knack for making scenes come alive with small noises adding up to a bigger atmosphere. The music is by DEAD FATHERS, a collaboration between Britt and Zach Calabro, and definitely casts a pretty wide net from the purely atmospheric to absolute bangers where appropriate.

GS: Is there anything you hope players will take away from their time playing Gunbrella when the full game releases next year?

CD: I’d hope that they take away that they love us and they want to marry us, and that they look forward to other things we make in the future, and that they go onto social media and talk about how we’re their favorite developers and that we are so smart and handsome. If that doesn’t happen, then I hope they both have fun and connect with the world that we’ve built for them.

Many thanks to Cullen Dwyer for taking the time to answer these questions. Gunbrella releases next year on Switch and PC.