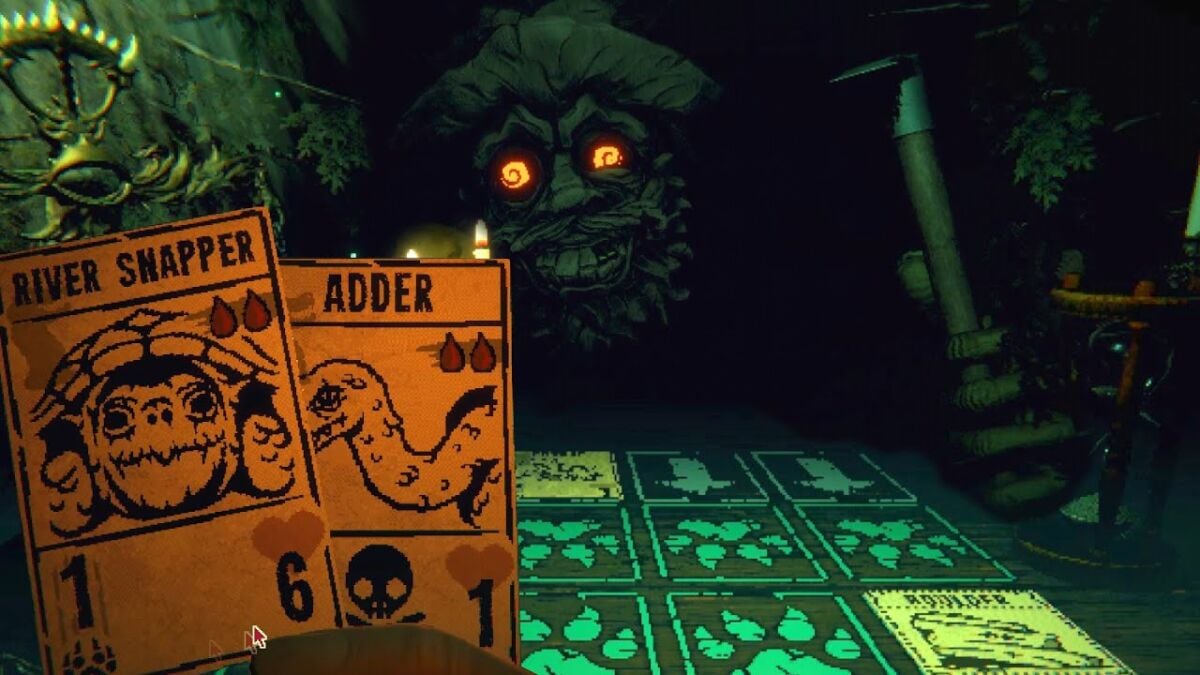 There is no wrong way to play Inscryption, the latest mind-melting game from Daniel Mullins. But there may be an ideal way.

A roguelike deckbuilder set in a haunted cabin littered with intricate puzzles, Inscryption melds horror and gameplay in unique and surprising ways, securing it as one of the best video games of last year. While the game has enjoyed success on Steam, its recent arrival on the PlayStation 4 and 5 is a blessing. Featuring newly-integrated DualSense features and a reworked control scheme, Inscryption is a deliciously devious delight to the newcomer. But those who have experienced the game previously may find something missing in the console version.

When new players install and boot up Inscryption, they are greeted by a main menu. Players can adjust settings, but strangely, they cannot begin a “new game.” Instead, the game asks them to “continue”–and this is just the first of Inscryption‘s many subversions. Once the player settles in, they’ll quickly learn that while the gameplay of Inscryption may feel familiar to those who dabbled with Slay the Spire, much more lurks beneath the surface. There is something dark and genuinely upsetting about the world of Inscryption, and that sense of dread only builds over time.

Players build a deck of forest creatures, earning cards through victories against a mysterious opponent or other opportunities as they move along a map. Victories can be swift and decisive, or battles can be drawn-out affairs that come down to the last card in the deck. Between battles, the player can push back from the table and explore their surroundings in the first-person, interacting with objects in their vicinity. By solving puzzles outside of the playing area, players may find additional cards or other useful tools that can be helpful. The mysteries unfold gradually, and the card game itself is addictively fun.

If for some reason or other, a player is reading these words having not completed Inscryption, it is advised that they stop reading. Immediately. Inscryption is best enjoyed knowing only the bare minimum. For anyone else–perhaps a player who loved the game initially and is excited to experience it again with gamepad in hand–feel free to read on. The new features implemented on the PlayStation are minimal but go a long way towards making the game feel new.

On the one hand, playing Inscryption with a controller feels just about as natural as can be. The game’s publisher, Devolver Digital, is certainly no stranger to helping developers port their games to as many platforms as possible. Drawing cards from the deck, flicking between the hand, the field, and any other point of interest on the board, feels snappy and clean using a controller. The first-person cabin portions feel slightly more clunky; players do not have full range of movement or vision, despite having two thumbsticks at their disposal, which can feel limiting. For the fortunate, the PlayStation 5 version of Inscryption makes fantastic use of the platform’s signature controller. The haptic feedback feels finely tuned, and light around the touchpad even reflects what is happening onscreen. For a game like this, which surely wasn’t required to include haptics, they add a level of immersion that is surprisingly well done. There is particularly ingenious use of the adaptive triggers in regards to certain single-use items.

That said–something is undeniably lost in playing Inscryption on a console instead of a PC. It is difficult to pinpoint; Leshy’s Cabin, normally claustrophobic, dark, and creepy as hell, feels somewhat diminished when blown up on a TV screen and viewed from a couch. The FMV portions that follow the hapless Luke Carter feel less intimate and mysterious in much the same way. The most unsettling part of the original game, where computer files start getting wiped after a rogue AI starts taunting the player, lacks the same teeth on PlayStation.

Chalk it up to the player feeling slightly more removed from the action, but the more meta tricks that Inscryption pulls in its late game feel a little less impactful on PlayStation. Then again, that could also be attributed to a player having experienced the magic once before–things may land differently depending on the individual. But there is something very cool about battling an opponent who scans a player’s Steam library for information that doesn’t hit the same way when the game pulls from the PlayStation friends list.

Inscryption can be a difficult game to discuss without spoilers. All that needs to be said is that the game remains a must-play. While some of the magic of that first playthrough may be lost in translation to a console, the game itself is still incredibly fun and genuinely haunting.