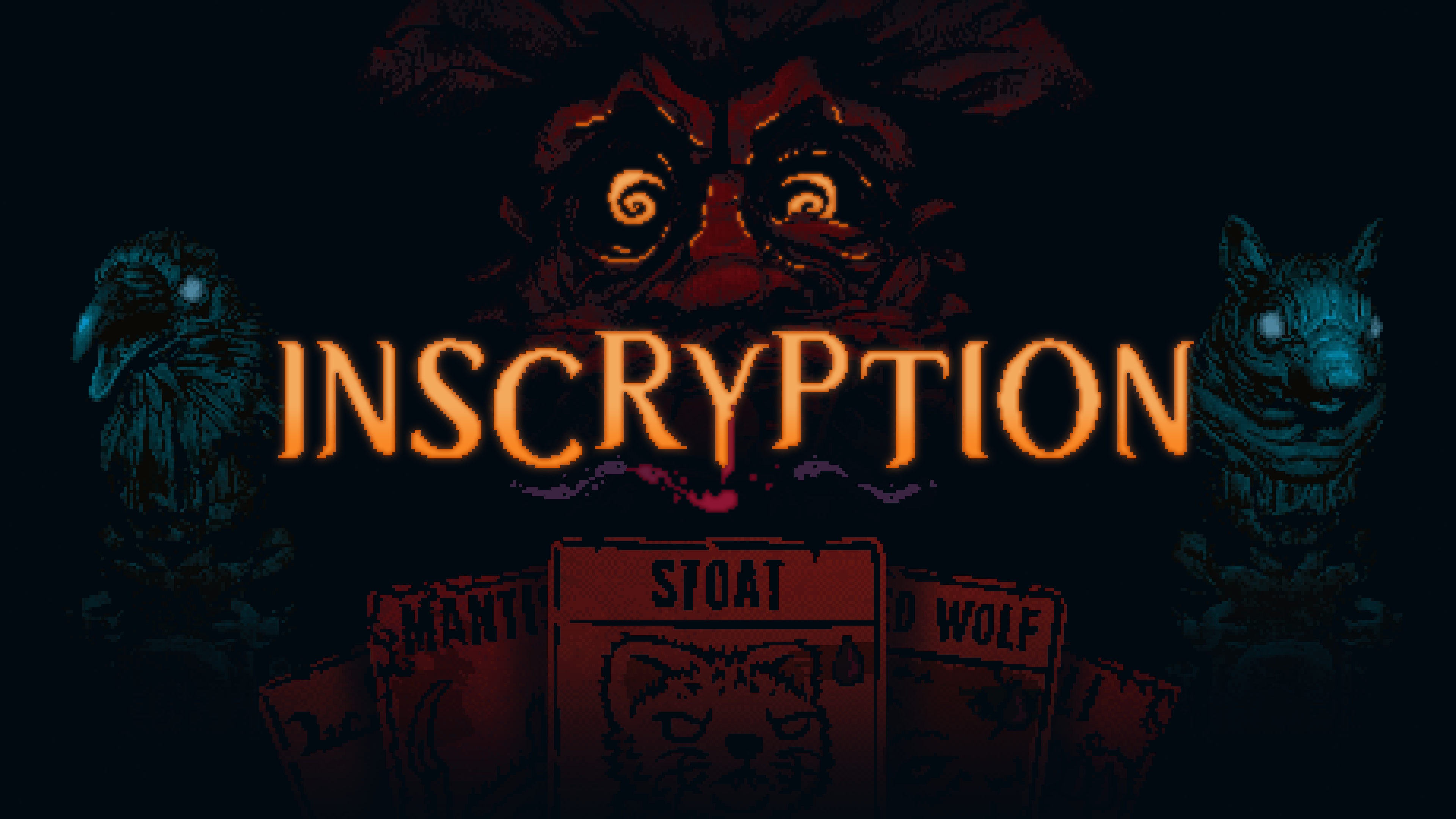 Against all odds, 2021 has been a banner year for video games. From the PlayStation 5 and Xbox Series coming into their own with the likes of Returnal and Psychonauts 2 to Nintendo reaffirming that the Metroid series is alive and well, it is easy to forget that indies have been stealing the spotlight all year. Inscryption, developed by Daniel Mullins Games and published by Devolver Digital, continues that trend. Featuring intricate mechanics, foreboding art direction, and a story with more twists and turns than a rabbit warren, Inscryption is an unforgettable experience. Unfortunately for people who enjoy reading reviews, it is also best enjoyed completely blind.

A Cabin in the Woods

Ever since it was showcased during Devolver’s 2021 E3 showcase, Inscryption has had players intrigued. The wait has been well worth it. From the very start, players are treated to a wonderfully atmospheric experience. Everything about the presentation feels deliberately designed to unsettle, from the creaky-front door-sound of the first challenger’s eyes opening to the Saw-like puzzles strewn about the wooden cabin where the card games take place. Inscryption creates a specific mood of uncomfortable dread and carries that tone throughout.

At its core, Inscryption is a card game wrapped in a horror-mystery. The game begins in the first-person perspective, with the player seated across from their opponent at a dusty table in what appears to be a musty old hunting cabin. After commenting on how they haven’t been challenged in what feels like forever, the opponent gives a brief tutorial on how the bulk of Inscryption is played. The field is four lines wide on the players’ side, and four on the opposite side. Players can draw a card once per turn, either from their main deck of cards found throughout the rest of the adventure, or from a side deck, packed solely with weak but no-cost squirrel cards. Most cards have a cost associated with playing them; many force the player to sacrifice one or more cards on their side of the field to bring forth more powerful creatures. Once the player has drawn their cards and summoned their creatures, they can choose to ring a bell to enter an attack round. Attacks occur, either against the opponents creatures or to the opponent directly. Deal enough damage to the enemy and the scales will tip down, signifying the end of a match. But if the scales tip the other way, the match is over. Lose two matches in one area, and the entire game starts over from the beginning.

Between matches, a map full of icons is rolled out on the table. Players move their figurine from node to node, finding new cards to add to their deck or powering up existing ones. They may meet the Mycologist, a mad scientist mushroom-being who can fuse doubles in the deck together to create a stronger creature. Or there’s the woodcarver, who can bestow game-breaking sigils on specific classes of creature with the proper planning. The map eventually leads to boss fights, challenging matches against larger-than life characters where the player only has one chance at victory. Defeat a boss, and the player moves on to a new area, where more challenging matches and more powerful creatures await.

There is nothing like the satisfying snap and slap sounds of playing cards hitting a tabletop. Collectible card games, or CCGs, have long been playable in the digital space. Even the Pokemon series has a few Game Boy Color titles based on the ever-popular card game. But no card game has ever been as hauntingly satisfying as Inscryption. From the first hand dealt to the last point one, every match played in Inscryption simply feels great to play.

A deckbuilding roguelike is only as fun as its core mechanics. Inscryption starts off simply, but by the time players make it all the way to the final few matches, they’ll have internalized more complicated mechanics than can possibly be imagined. Basic gameplay in Inscryption is easy to grasp. Rather than having to reduce their opponents life points to zero like in a Yu-Gi-Oh!! duel, or pursue their own asynchronous goals like in Android Netrunner, Inscryption matches go back-and-forth with whiplash regularity. They’re quick and dirty, life-and-death struggles.

But outside of the card duels there are other mysteries to solve. When the map is rolled out on the table, the player can get up and explore their surroundings–with restrictions. Throughout the cabin are puzzles to interact with, and with a little poking and prodding, a deeper layer of intrigue is soon revealed. What starts off as a fairly straightforward tale of a person trapped in an endless series of battles turns into something much darker.

For fans of the genre, Inscryption offers plenty to latch onto. The deckbuilding is robust and nuanced, and overcoming great odds feels skillful. From the haunting music to the outstanding art direction, Inscryption must be seen to be believed.

If that sounds intriguing, stop now. Play Inscryption. Come back. And read on. There is another layer beyond what is initially presented that helps Inscryption ascend even further.

Inscryption is not the game you think it is.

After several duels and three boss fights, players can finally battle the last boss. It’s a tough fight- players must tip the scales in their favor three times instead of two, and this boss has all the abilities of previous bosses at their disposal. After achieving victory, the player is rewarded not with a powerful new set of cards or a new game plus option, but with a set of FMV videos with terrifying implications.

Inscryption essentially turns into The Blair Witch Project by way of Doki Doki Literature Club. The live action bits feature a popular internet personality (Luke, “The Lucky Carder”) who specializes in collectible card games, opening packs live and doing reaction videos. In one particular video, he’s extremely hyped because he a found a set of unopened packs of Inscryption cards at a garage sale. Turns out Inscryption, in the lore of the game, was a single-set card game. It never received any expansions and seems to have ended production prematurely. But in opening one of these sealed packs, Luke finds something written in pen on one of the cards: a set of coordinates.

The next video is Luke trekking through the woods to that set of coordinates and digging up something buried deep in the ground. It’s a floppy disc, and on the disc is something that he’s pretty sure never existed: a video game version of the discontinued card game. The game players have just spent hours mastering simply should not be, and now the game becomes a quest to unlock more FMV videos to uncover the mystery behind Inscryption.

It’s a great twist, but only the first of many. Players are kicked back to the start screen, and where they originally could only select a Continue option, now they can start a New Game. But players aren’t taken back to the cabin and their original captor. Instead, they’re faced with an entirely different art style, a retro-inspired top-down adventure more in the vein of Pokémon Trading Card Game for the Game Boy Color. The base card game mechanics are the same, but now players control their tiny avatar in an overworld, exploring areas and talking to NPCs. They can find packs of cards on the ground or in other objects, and are free to create their own deck to suit whatever playstyle they choose. All the familiar creature cards are still present, but with additional mechanics that were not present in the more stylistic first part of the game.

This is because everything leading up to this point was at the whims of a sentient piece of code, at war with three other pieces of code within the floppy disc of this forgotten digital version of Inscryption. These four Scrybes are always trying to subvert and overcome one another, so much so that after a hours of playtime in the retro world, the art style and mechanics shift again to a futuristic version of the card game controlled by a different Scrybe. The game essentially becomes four games in one, with each new style layering in new mechanics and tweaking the old ones. Players never feel lost, because the basic actions remain the same; it’s as though a real life card game has received new rules and expansions but they are being implemented in real time.

It might seem disorienting for the player to jump from one aesthetic to another, but the hook is so intriguing that it becomes impossible to stop playing. Inscryption becomes a psychological horror story told through card game mechanics, and remains gripping to the very last moment. Things don’t end well for The Lucky Carder, and after the final FMV video players are left to wonder where the cursed floppy disc will end up next. The game remains darkly satisfying until the end.