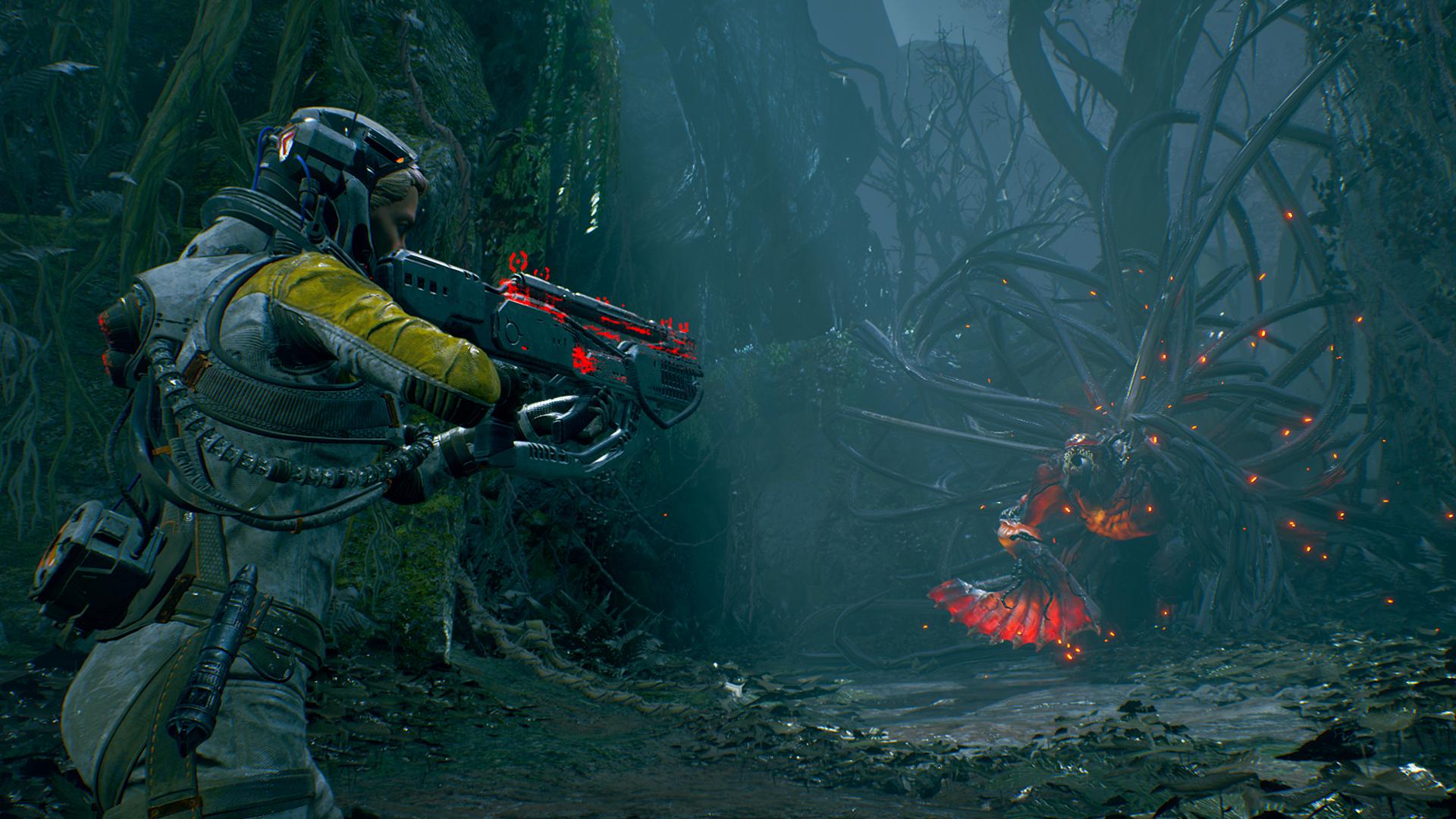 Returnal, the ultra-difficult three-act action roguelike from Housemarque, is perhaps one of the few handful of PlayStation 5 games so far that actually feels as if it is taking advantage of the platform’s special quirks. The game’s blazing fast load times and jaw-dropping visual effects are indeed impressive, but Returnal feels truly modern in terms of its system’s expectations for how it controls. By playing with features and options exclusive to the PlayStation 5’s DualSense controller, Housemarque has made Returnal feel even more unique from the palm of your hands. Their dedication to the technology fueling the DualSense controller makes a case for developers to sit up and take notice.

Housemarque had the DualSense in mind from the beginning of their latest title’s development. The studio’s motto of “gameplay first” is evident from the work they have produced over the years. Housemarque has made a name for themselves by creating arcade-style shooters for the modern age such as Resogun, but Returnal further expands that idea by blending fast-paced run-and-gun shooting with just a dash of random albeit appropriate elements. Guns, loot, and parasites vary between runs, and skill always plays an enormous role. But everything happening onscreen wouldn’t be possible without the tech of Sony’s latest console, and the DualSense controller plays a pivotal role in making Returnal feel extra special.

Tuned-in players will notice right away that controlling Returnal is something entirely new. After crawling from the wreckage of her ship, Selene stands to her feet in the Overgrown Ruins, the first biome in Returnal. It’s pouring down rain, and from that moment on, the DualSense controller shines brightly. Players can feel drops of rain like they’re coming from the controller itself, providing a whole new level of immersion. But after the initial shock and delight of that first room, players will quickly find themselves in firefight after fierce firefight. The way the controller becomes a tool for immersion as the player’s skill grows is nothing short of revolutionary.

In a recent PlayStation Blog post, Housemarque’s UI/ UX director Johannes Koski unpacked some of the choices the team made to keep the player engaged and immersed. In regards to risky Malignant items, Housemarque chose not only to make them visually distinct but haptically so as well. Koski emphasizes, “Malignant items emit a heartbeat-like haptics pulse when nearby the player. This heightens the sense of risk and reward associated with these special items and helps in differentiating them from other pickups.” These kinds of design choices are layered throughout every aspect of Returnal.

The advent of the DualSense adds an extra dimension of complexity to new games. There is the potential for much more variation in control schemes. Extra options for developers are always welcome, and choosing how these unique features can factor into a new game is a tremendous challenge to overcome. New hardware and new features can be exciting to work with, and Housemarque has embraced the challenge wholeheartedly.

While Returnal does not use every available feature of the DualSense, the haptics, audio cues, and adaptive trigger functionality that Housemarque focuses on are expertly implemented into the game’s heaviest action moments to its quietest. The result is a game that controls intuitively and seamlessly more often than not. In Returnal, the screen is often incredibly busy, but the controller itself provides players with clues and feedback that is massively helpful in combat. If the player wants to turn off visual cues onscreen so that there are fewer distractions, they can still be fully effective in combat thanks to features like a pulse that alerts players when their alternate firing capabilities are fully recharged.

It’s worth mentioning that the player can toggle whether or not they actually want to use the adaptive triggers in combat, in addition to other UI customization. While Housemarque developed Returnal with the adaptive triggers in mind, they wisely provide players options to shoot however they please. To be sure, learning how to find the “sweet spot” in the adaptive triggers is a whole new skill that players have to teach themselves. Instead of pressing a trigger all the way in, players will learn to feather the left trigger just so, finding the distinction between pulling the button down all the way to fire off powerful alternate weapons and halfway to aim over the shoulder. It is a delicate balance and certainly doesn’t feel intuitive right away. But Housemarque is trying to teach something to players fortunate enough to have found a PlayStation 5: there’s a new way to play. They have essentially added additional buttons to the controller, even though they did not need to.

Returnal does not use every button on the DualSense, however, by giving players flexibility in their control scheme they manage to bridge the gap between players eager to try something new and those who would rather stick to what they know. Housemarque has done something special by embracing the DualSense and its myriad features. The meticulous craft of designing Returnal‘s control scheme is immediately evident from the moment players pick up the DualSense during the game’s opening moments. It’s a triumph that will have players asking how other studios can hope to achieve similar success.

Game director Harry Krueger said in a promotional interview, “I think there is a sacred and unspoken bond between the player and the controller, and that is something that always demands reverence.” By embracing the PlayStation 5’s DualSense controller and its increased functionality, Housemarque has shown that players care about how it feels to play video games as much as what they are actually playing.