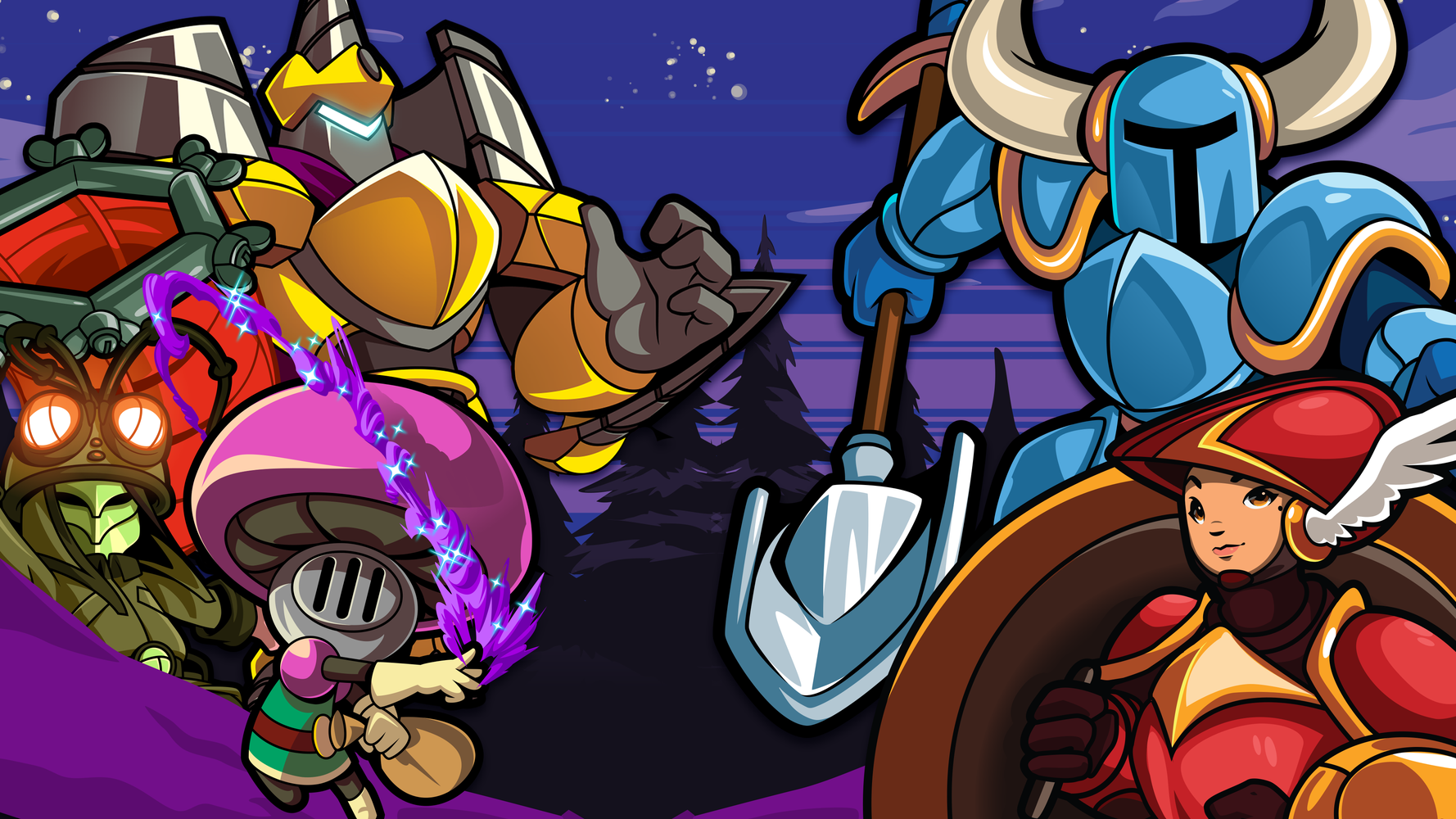 After years of anticipation, trailers, and delays, Yacht Club Game’s much-anticipated Shovel Knight Dig is just around the corner. While Yacht Club are no strangers to producing spinoffs for their flagship series–just last year we received the excellent Shovel Knight Pocket Dungoen—Dig represents a striking new direction for the franchise. Developed by British indie studio Nitrome, a team known best for its hundreds of browser-based flash games, Dig is a roguelike platformer featuring procedural generation, handcrafted levels, and a shovel-full of new gameplay ideas in an adventure that sees the blue-helmed hero digging his way through a mysterious well.

Ahead of Shovel Knight Dig’s September 23 release date, Goomba Stomp caught up with Yacht Club Games Marketing Manager Celia Schilling in a recent episode of the NXpress Nintendo Podcast. In this wide-ranging discussion, Schilling gives a behind-the-scenes look at Dig’s development history and teases what fans can look forward to unearthing when the game releases.

The following interview has been edited for clarity and cohesiveness.

GS: Where did the idea for Shovel Knight Dig first come from? How did that collaboration with Nitrome get started?

Schilling: We were interested in making a new Shovel Knight game, but we wanted to work with a different studio to create it. Our first choice was Nitrome—because A, nostalgia, and B, we’re huge fans of their games! They do really well with roguelikes–that’s their bread and butter–and when we were thinking about what Shovel Knight Dig could be, they always came to mind. We reached out to them, and they were ecstatic because they’re a fan of our games, and we’re a fan of them. We did a high five, did some contract stuff, and got started on the game [laughs]!

It took around four years to create. We announced it in 2019, and a few things happened in the world, so it took a little bit, but I’m so excited it’s coming out soon.

GS: With so many roguelikes on the market, what makes Shovel Knight Dig stand out, and how does it incorporate Shovel Knight elements into its roguelike gameplay?

Schilling: With Shovel Knight Dig, we implemented a lot of platforming aspects in addition to its being a roguelike. For example, we designed some level hazards to be similar to what you’d experienced with the original Shovel Knight campaign. There will be a wealth of surprises and enemies that are returning, and you’ll have to use a similar combat style [to the original series] to get through. It has a lot of Shovel Knight charm and story elements to it. The Yacht Club team wrote the story for this game, and there are a bunch of colorful characters, some of which the Nitrome team created.

Besides the charming mechanics, what makes this game different is the heart and soul of Nitrome and Yacht Club games that went into it. I know that sounds very general, but so much humor, effort, and our combined wealth of abilities got put into this game, so I think Shovel Knight fans and the roguelike community will really enjoy Dig.

Also, the challenge is amazing [laughs]. You get to keep your gems when you go up the top so you can buy from the Hoofman. He’s a shopkeeper. You’ll get to know him, you’ll love him, you get to buy different things from him in the armory, and you go down again and you feel like a shovel god. It’s great [laughs].

Schilling: It is not a direct sequel. I’ve played through the game, I know what happens at the end [laughs]. It might not be a direct sequel…but when you play the game, you will be really, really excited because it’s going to explain a lot of things. This game is 100% canon. It’ll answer a lot of questions. And you’ll get also a brand-new story out of it!

GS: Having already successfully collaborated with other developers such as Vine for Pocket Dungeon or Mechanical Head Games for Cyber Shadow, what was the process like working with Nitrome on Dig?

Schilling: In true Yacht Club games fashion, we’re always involved [laughs]. For this project, it’s been a lot of room review and giving feedback. We wrote the script for Shovel Knight Dig. We designed all the hexcavators [game antagonists], and then Nitrome created them in their world. But it’s the same thing with levels. We came up with the concepts of what we wanted and then Nitrome came back with how they reinvented it in their own style. It’s been a very back-and-forth form of collaboration.

When we were working with Vine [on Pocket Dungeon], we got more experience working with developers far away. I think that with Dig, we’ve definitely grown as a studio with collaborations like this because we’re able to communicate as best as possible, to work together on something really awesome.

Shovel Knight Dig employs a different progression model than previous titles in the series. From the PR, “Shovel Knight Dig levels have been meticulously crafted, then stitched together using proprietary generation techniques for infinite replayability.” How does this progression work in practice? How much changes in each playthrough?

Schilling: The stages in themselves follow a pattern. So, for example, in Level One, the Mushroom Mines, you go through three stages, and then you reach the hexcavator. That follows a similar pattern for basically every level—it’s three stages and one boss. The thing is, though, what you encounter as you go down is a whole fun mystery [laughs]. We’re able to seamlessly craft designed levels which procedurally generate, so there’s a lot of really randomized elements to it. So, sometimes you’ll open a room, and it’ll be full of gems! And then another time, you’ll go in the room, and it’s full of spikes. But we went through the randomized parts of it, and we’ve definitely crafted some really fun mysteries for you guys to uncover, so it’s going to be adventure every time.

There are thousands of rooms to delve into, so every time you play, it’s a brand new adventure, which is really awesome as a player…With it being a roguelike and having fast-paced gameplay, the game’s pacing almost has a rhythm to it. So, when people watch you play, it looks like you’re choreographing content, when really you’re just playing and it’s the level leading you.

GS: If it has thousands of rooms, roughly how long does it take to complete a run through the game?

Schilling: It depends how fast you can go, honestly. But also keep in mind, as you go down the well, there are going to be different pathways that you can choose. So, the replayability of this game is pretty long. And also, there are a few plot points of things you need to accomplish to get the ending you want—the usual fun stuff that I won’t spoil for you!

Make sure to talk to everyone; that’s my pro tip. Also, you should definitely say hello to Altias, Shield Knight’s pet owl. I think there’s a reason why he’s hanging out there…

GS: Can you pet the owl?

Schilling: You can pet the owl.

GS: Welp, Game of the Year. On the topic of characters, what’s the balance of new and old in Shovel Night Dig? Is it like staying in line with the previous games in the series or is it pushing out in a new direction with more new characters and mechanics?

Schilling: It’s a little bit of Column A, a little bit of Column B. There’s a lot of enemies that you’ve encountered previously, but there’s a bunch of other cool stuff that’s new as well. You’ll encounter Blorbs again, and you’ll get to see Propeller Rats, and now they’re carrying new hazards. You’ll also get to encounter hexcavators, like Mole Night, Tinker Night, and Scrap Night, who you might remember from Pocket Dungeon, on your adventure. But there’s also new characters like Drill Night and Spore Night and a ton of other characters like Whisker, who’s an NPC who helps you on your adventure (and is definitely not a cat) [laughs].

GS: Many of Yacht Club Games’ previous releases on Nintendo platforms have included amiibo support. Are there any plans for Shovel Knight Dig to have amiibo support?

Schilling: Yes, we’re planning for amiibo support. I don’t think it’s going to be available at launch, but eventually, you will be able to use your amiibo in the game.

GS: This is the first time a main Shovel Knight game has gone for a lush, 16-bit look as opposed to the traditional 8-bit-inspired visuals of the original series. Why take this approach for this iteration, and what was it like to translate these characters over to this new visual style?

Schilling: We always joke that Shovel Knight would be considered “8-bit,” it’s how you remember the NES. With the 16-bit inspirations [in Dig], that’s how I remember Super Nintendo! And also, if you’re looking into other Yacht Club titles, Mina the Hollower is how you remember Game Boy—it’s not exactly how you remember it, but if you just picture in your head, that’s what it looks like. I guess we’re just going through the decades. Maybe in 20 years we’ll have like, Xbox 360 graphics in a game [laughs].

But as for working with Nitrome on this project, we really let them do their thing. This is the style that they felt most confident with for Shovel Knight Dig, and it looks gorgeous. It’s been an absolute blast seeing how they’ve reinvented our characters in this brand new world.

GS: Yacht Club has previously stated that Pocket Dungeon did not initially meet its sales expectations (although it did launch with stellar reviews). How do you plan to approach the launch of Shovel Knight Dig following the release of Pocket Dungeon?

Schilling: For Pocket Dungeon, we knew that it was very niche. When it comes to puzzle games, people can be like, “Ten out of ten, I love this game, this game saved my marriage—but we’re not buying it, so thanks anyway” [laughs]. It’s one of those things where we knew that going in, but we love puzzles, we believe in that game, we’re releasing slates of DLC, and we believe that eventually people are going to fall in love with it too. And those who have played it are obsessed. For example, at PAX, everyone would be like, “Oh, puzzles, I’m not sure…” And then they’d play it and then keep on coming back.

Dig is a completely different beast since it is a roguelike platformer rather than a roguelike puzzler. We’re just going to give it all, put our hearts into it, and hope for the best. And that’s just how we do our marketing. We put a lot of effort into our campaign and crafting. We have a ton of things planned to help explain the game with launch and post-launch support. We hope everyone welcomes Shovel Night Dig into their heart like our original campaign.

Special thanks to Celia Schilling for her time. This is only part of the conversation – to hear more about our discussion of all things Shovel Knight Dig and Yacht Club Games, tune in to the latest episode of the NXpress Nintendo Podcast!