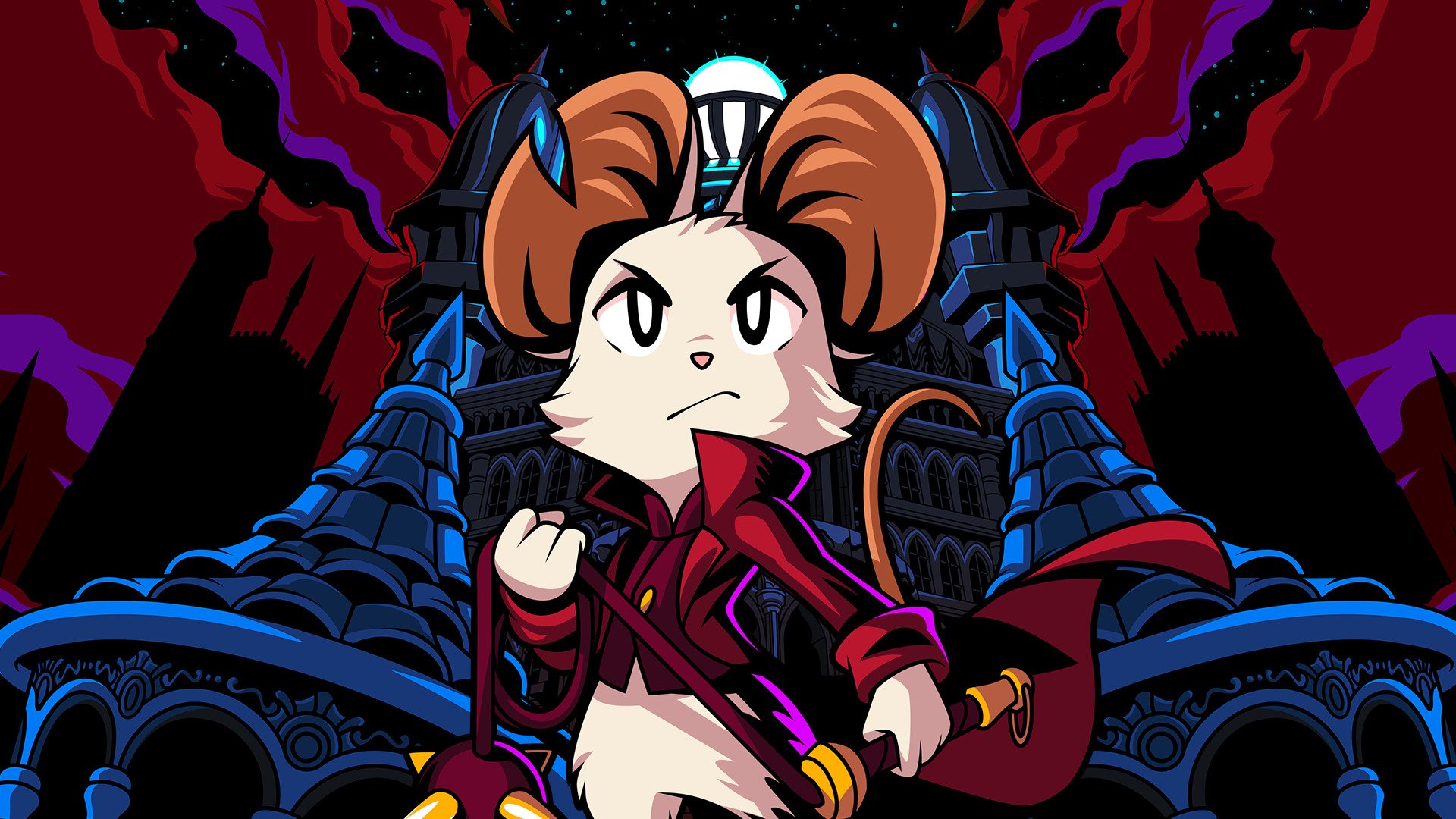 Nearly a decade since Shovel Knight’s Kickstarter campaign first struck the earth and changed the indie game landscape, developer Yacht Club Games is branching out into something different. In Mina the Hollower, Yacht Club is breaking new ground, recalling the classic top-down action games of the Game Boy Color in this retro gothic horror-infused adventure.

Its brooding atmosphere and Zelda-like gameplay may seem like a departure from the formula established by Shovel Knight, but Mina and its evocative haunting world have been a long time coming.

“Our colleagues keep on joking that we got bit by the spooky bug when we were developing Shovel Knight: Specter of Torment just because we had so much fun making the creepy crawlies and the game’s darker tone,” says Yacht Club Games’ marketing manager Celia Schilling, referring to Shovel Knight’s 2017 graveyard-themed prequel. “With Mina the Hollower, we’re really leaning into that.”

Speaking in an interview with Goomba Stomp on a recent episode of the NXpress Nintendo Podcast, Schilling describes Mina the Hollower–currently in the final stretch of its Kickstarter campaign––as the latest opportunity for the Yacht Club team to pay tribute to the games and stories that inspired them most.

From the very first moments of its early demo, Mina the Hollower evokes a mixed aura of Game Boy icons like The Legend of Zelda: Oracle of Ages and modern action classics like Bloodborne. Dropping players into a pixelated gothic world brimming with crypts, decrepit castles, and undead enemies, Mina the Hollower follows the eponymous Mina on her journey to unearth a deep mystery in the cursed Tenebrous Isle.

This eerie setting immediately demonstrates plentiful influence from horror stories. According to Schilling, the development team was keen from the very start to fill the game with all their favorite horror motifs, from classic gothic tropes up to modern styles.

“When we established the world of Mina, it became a question of, ‘What else do we want to see there?’” Schilling recalls. “It’s taking our hopes and dreams of what we’d love to see an experience in a world like this and applying it to Mina the Hollower. You’ll see a lot of fun, different environments, but it’s basically a wish list of spooky horror genres that we’re throwing in for different areas and building out.”

Not only is Mina a tonal departure from Yacht Club’s more upbeat previous efforts, but its gameplay also introduces new approaches. Its top-down action combat, exploration, and puzzle-solving adds extra dimensions to the action, providing Yacht Club another method through which they could express their appreciation for games past.

“We love all different types of gaming,” Schilling explains. “We love platformers, and everyone learned with Shovel Knight Pocket Dungeon that we love roguelikes and puzzlers, too. Mina is just another genre that we love to explore. We’re big fans of the Game Boy and the handheld era of gaming, so this is a love letter to that generation.”

“We like exploring our old retro aesthetics but with a modern twist.”

Of course, for as much as Mina looks to call back to retro classics, it’s shaping up to be far from a mere throwback. Instead, much like Yacht Club’s other retro titles, Mina introduces a handful of modern tweaks to its presentation and gameplay. One of the game’s most immediately striking features is certainly its chunky yet vivid pixelated graphics, built for a screen resolution almost identical to that of an original Game Boy Color–Mina’s 256x144p to the GBC’s 160x144p.

Mina might not have as many pixels to work with as other modern pixel art titles, but Schilling describes how it makes the most of what it has for modern hardware and contemporary audiences.

“It still holds true to your heart, but it looks better on a TV,” she says of Mina’s approach to its Game Boy-esque aesthetic. “It’s just keeping things as organic as possible throughout that development process, while at the same time making sure that it’s coming from modern development standards. As with Shovel Knight, we like exploring our old retro aesthetics but with a modern twist.”

As colorful and upbeat as the visuals might be, Schilling highlights how Mina’s story isn’t afraid to delve into some darker topics. While details about the overarching story are currently scarce, Schilling hints at “definitely darker tones” characterizing the narrative–tones enhanced by the game’s lineup of sidequests, which she describes as “innocent interactions that unveil themselves into something more devious that really sticks with you.”

Developing for the center

Beyond its retro presentation, Mina the Hollower hardly limits its gameplay to retro models. Along with a robust roster of traditional action gameplay, Mina also includes a handful of all-new abilities like the ability for Mina to burrow underground before bursting up into the air for a burst of speed and altitude. According to Yacht Club, this gameplay arsenal is itself a retro reference. “When developing a Game Boy game, there’s a focus on certain mechanics that tend to encompass gameplay,” Schilling explains. “For example, with Zelda, you have your sword and you have your shield, but also you can shift that out for different customizable sub-weapons.”

Schilling aligns Mina’s gameplay loop with this model, where the core mechanic of burrowing is complemented by a lineup of sidearms and extra abilities that provide extra flexibility to Mina’s moveset. It’s all driven by the same guiding question: “Once we decided on the burrowing mechanic, and since it’s based off the aesthetic of a Game Boy, we realized that’s the focus mechanic and asked: what kind of cool ways can we develop that ability, where you can discover new ways of gameplay and play it how you would like?”

And that’s not to mention one of Mina’s most distinct abilities for a Zelda-like: the ability to jump. Mina can jump across chasms, adding a level of platforming to the moment-to-moment gameplay. Schilling notes the challenges that adding this mechanic entailed: “We had to reinvent the wheel to figure out an organic way to develop that mechanic, because there aren’t many references for having that type of jump with a top-down kind of action-adventure game while having also platforming in there. It was definitely a hurdle for us to figure out.”

The demo for Mina the Hollower certainly poses a challenge, but by no means does it feel impossible. Schilling describes this dynamic as an effort toward striking a balance between “casual” and “hardcore” audiences. “We try to develop for the center. There’s the professional speedrunners, the hard mode Champions, and there’s also like the casual gamers who just pick a game up and have fun. We look at both aspects of gaming and ask, ‘For every scenario that you’re going to be in Mina the Hollower, what’s a way that we could develop it where you’re having the most fun?'”

“For example,” Schilling continues, “we held a speedrunning tournament recently where players did a speed run through the Mina the Hollower demo. They only had one hour to discover it and it was really interesting: for example, we developed a pathway where you bring a statue head over a chasm. But the pro gamers were like, ‘Oh, we can just throw it over the ledge over there and hope for the best’–and oh my god, it worked. I didn’t know you could do that! With development, we provide options for casual gamers to have fun, but at the same time, we do leave things in where if a certain person wants to challenge certain things in the game, maybe they could have a really fun surprise.”

Kickstarting it once again

Yacht Club Games made a name for itself as one of the first true Kickstarter darlings with its original campaign for Shovel Knight, and ahead of Mina’s release that is set for the end of next year, the developers have returned to that formula for its new IP. Some may wonder why the company would need to resort to crowdfunding after the smash success of its previous releases, but Schilling says it’s all a matter of building a community and ensuring that the game reflects its players’ interests.

“For full transparency, we are primarily funding this game,” Schilling states. “The main intention of Kickstarter is to build a community around it, much like we did with Shovel Knight, and to expand upon parts of the game that we thought are really cool. But we could use that development flow to be able to focus on it and really expand it and flesh it out. So for Kickstarter, we’re investing along with the community…and it’s really fun to pull back the curtain that you normally wouldn’t be able to do as profoundly during regular game development. It gives an opportunity for the community to experience development really hands-on. “

While many of the Kickstarter rewards include physical copies of Mina the Hollower, the game has yet to be confirmed for any specific platforms. “We can’t confirm at this time because you never know the future,” Schilling says. “The Switch 2 could finally come out tomorrow, and then we’d be more focused on that and say, ‘Well, what makes the most sense for our community?'”

Regardless, after the incredible success of the Shovel Knight franchise and its many spin-offs, cameos, and follow-ups, Mina the Hollower shows Yacht Club pursuing truly new horizons. Incredibly promising from the few glimpses we’ve already been granted, Mina has plenty of time to expand and grow: with a tentative release date of December 2023, there’s plenty of time for the game to expand its ambitions even further.

Whatever the case, there’s no telling what the Yacht Club team may add next–as Schilling reveals,”We have a hard time putting the creative pen down. But what I can tell you is this: get ready for the spookiest action-adventure that’s based off an eight-bit aesthetic for the modern era.”

Special thanks to Celia Schilling for her time. This is only part of the conversation – to hear more about our discussion of all things Mina the Hollower and Yacht Club Games, tune in to the latest episode of the NXpress Nintendo Podcast!