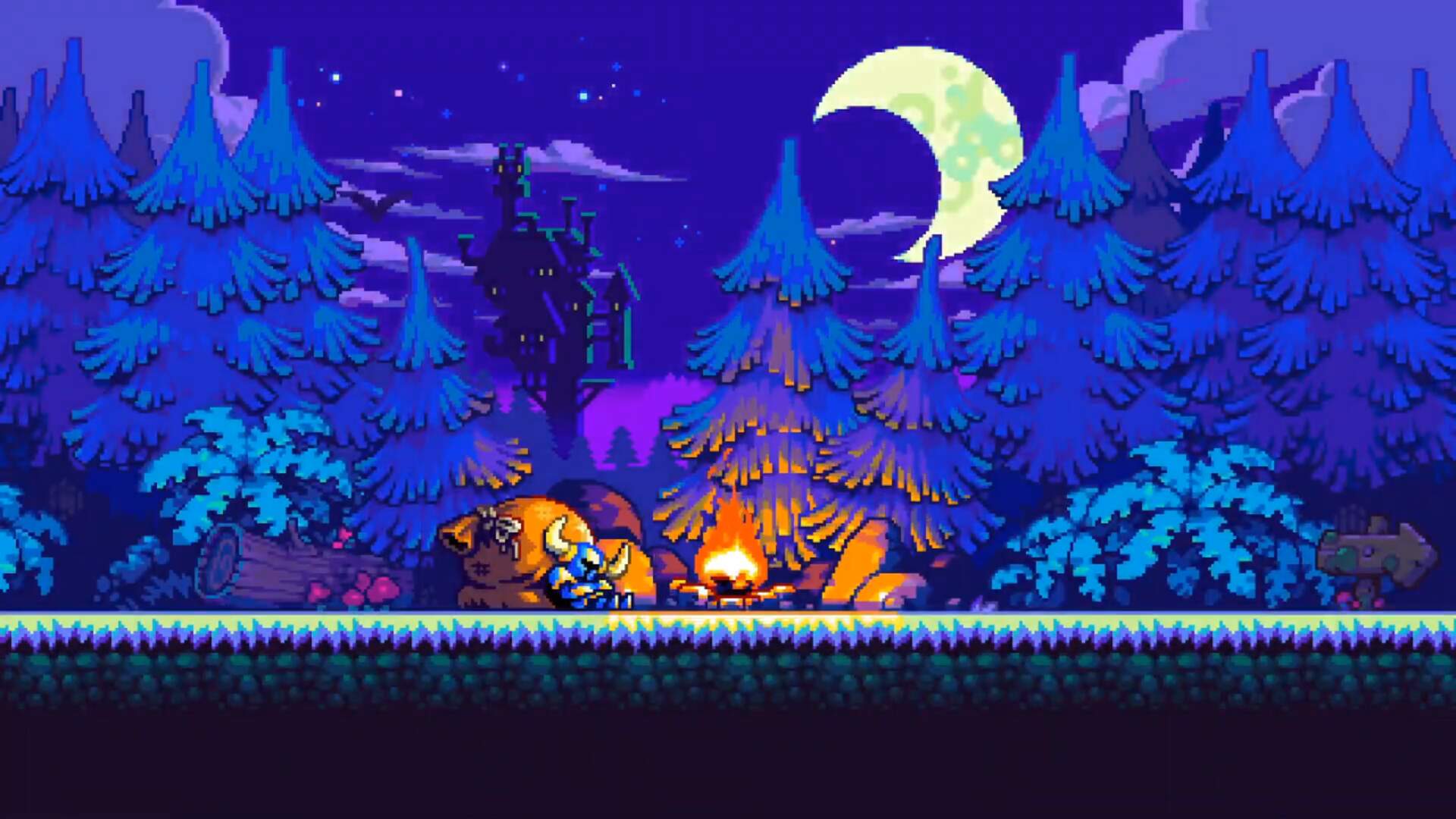 There’s a lot to admire about Shovel Knight. What started as a Kickstarter darling has grown into a veritable indie franchise spanning six standalone games released since its debut in 2014, with each one feeling more unique than the last (card games and Smash Bros-style fighting, anybody?). Perhaps no game better demonstrates the sheer scope of Yacht Club Games’ blue-armored hero than Shovel Knight Dig, a roguelike platformer that manages to carve out a place for itself amid a veritable sea of indie roguelikes. While taking many notes from previous Shovel Knight titles, Dig overflows with ingenuity and originality, becoming a starkly creative take on an often overwrought genre and a standout entry in an impressively ambitious series.

Shovel Knight Dig opens with the eponymous hero enjoying some well-earned rest by a campfire, guarding his bag laden with treasures won from his adventures with his companion, Shield Knight. Yet only moments after starting the game, a new foe called Drill Knight bursts forth from the ground, steals Shovel Knight’s bag, and sets off down a mysterious well. Unhesitating, Shovel Knight dives in after him, and soon finds himself digging endlessly through a series of underground regions.

By no means a narrative-heavy game, Dig lets the basic premise guide the way and puts the focus on the moment-to-moment action. Yet the further you dig, the more the story unfolds into something more expansive altogether. Between environmental secrets, chance encounters with strange characters, and emergent narrative beats that arise with every run through the well, the story develops eventually into something that sheds light on the wider story of the franchise altogether.

Beyond the narrative significance, it helps that story is still told with all of Yacht Club’s signature upbeat silliness. Players will find more than a few puns scattered around their adventure, and it’s worth taking time to talk to all the quirky NPCs that can be found throughout the campaign. While some will simply share some silly witticisms or wry observations, others will offer new insights into the lore of the Shovel Knight universe–between the main story and tiny narrative events along the way, Dig’s story offers new insights into the story of Shovel Knight, Shield Knight, and how the events of the main series first fell into place.

The real treasure awaiting excavation in Shovel Knight Dig is its moment-to-moment gameplay, and it is here that the game shines brightest. It inverts the series’ core gameplay: while the mainline platformers have players jumping, slashing, and digging from left to right, Dig features just the same actions, but in a different direction—it’s all about exploring deeper down the well. The further you dig, the more regions you encounter, ranging across a truly varied lineup of levels quite unlike anything else that has appeared in any other Shovel Knight entry. Crucially, these levels are never quite the same in each playthrough: Dig is procedurally generated in true roguelike fashion, but its individual levels—the puzzles you solve and obstacles you overcome—are intentionally designed by hand. Dig is far from the only roguelike to blend human-designed levels with randomization (hello, Hades), but the way it executes this structure is key to making the game work.

Whereas many roguelikes can feel hampered by their procedural generations, stuffed to the brim with lifeless levels stitched together by an algorithm, Shovel Knight Dig remains consistently engaging because each moment of gamerplay feels meaningful and intentional. Much like the mainline games in the series, every level in Dig brims with new ideas and gimmicks of its own—some might see you evading large earthworms biting through the dirt behind you, while others have you dodging giant drills that come flying in from left and right. These scenarios come right alongside enemies and mechanics pulled straight out of previous games in the series, resulting in something that feels familiar yet new all at once. Yet the way these gimmicks are presented is never the same twice, meaning that not only is every run different, but it feels as purposeful as tackling a level in a traditional, linear platformer.

The ability to customize and upgrade your knight with every playthrough also helps provide a constant sense of progression. While some money is lost with every failed run, you get to keep a substantial portion of the gems you find in each attempt, which can be spent on permanent upgrades like new armor and inventory slots along with making new items appear in each run. These items can provide varying use during each playthrough—many of them feel too convoluted or specific to be helpful in the game’s frenzied action—but players who take the time to learn to make the most of each weapon will find new and exciting gameplay styles at their disposal.

Dig’s arsenal of mechanics and abilities is a welcome feature given how challenging the game can be. Speaking from my own experience, it took me dozens upon dozens of failed attempts to make it into the game’s final areas. But here’s the exciting thing: even throughout this constant flow of trial and error, rarely did the game feel frustrating. The gameplay is extraordinarily fast-paced, as each level can take only a few minutes to complete. It takes mere seconds to go from failing in one run to hopping into the next, a frenetically addictive gameplay loop that hardly gets old even after a dozen hours with the game.

And while the procedural generation is one of the game’s strongest characteristics, it can sometimes feel imbalanced. While the game’s first region, Mushroom Mines, has so much variety that it can feel like a constant series of all-new levels even after hours of digging, later levels struggle to match that level of constant change. Most proceeding levels repeat their mechanics, ideas, and level layouts more often, which is a shame considering the precedent set by Dig’s opening act. This inconsistency may just be an issue with the game’s algorithm for procedural generation, but it nonetheless makes later levels lose some of the luster that makes the earlier portions of the game feel so strong.

Although the procedurally generated areas largely feel like balanced and fair challenges, there are instances where players can encounter unreasonable roadblocks on their dig. For example, I encountered more than a few instances of levels throwing unavoidable hazards my way, such as forcing players to drop below the screen only to reveal that there were spikes at the bottom of the pit all along. Thankfully, these issues were the exception rather than the rule. The vast majority of my time playing the game felt like a manageable challenge that required skill and quick reflexes, rather than luck, to overcome. Even if the game sometimes succumbs to the randomized issues of its genre, Shovel Knight Dig still achieves a level of creativity and cohesiveness that few other titles in the genre can boast of.

Not only does Shovel Knight Dig’s gameplay break new ground for the series, but its presentation is equally striking. After the series had long been known for its visuals that paid tribute to the 8-bit era, Dig finally introduces a new generation of graphics with a presentation inspired by the 16-bit classics. At the same time, the game is by no means a strictly faithful tribute to games on the SNES or Genesis–Dig boasts lush, colorful pixelated graphics that bring each detailed background or character sprite to life with a level of vividness and detail that would not have been possible on retro hardware. Both original and returning Shovel Knight characters take on a whole new life with Dig’s charming, cartoonish art style.

Of course, it wouldn’t be Shovel Knight without a new original soundtrack by series composer Jake Kaufman, and Dig does not disappoint in this regard. While there are some tributes to the main themes of the first game’s iconic soundtrack, Dig’s music is otherwise entirely original and includes a whole host of energetic chiptunes that perfectly complement digging through the game’s frantic world.

If Shovel Knight Dig proves anything, it’s that there’s nothing Yacht Club’s mascot can’t do. This remarkably successful foray into the roguelike genre not only boasts the simple and satisfying gameplay that made the original games great, but combines it with an ingeniously executed take on procedural generation that ensures every playthrough feels equally unique and satisfying. There may be some hiccups to how its randomized structure is executed, but more often than not the game feels balanced, fair, and constantly addictive–and it helps that the game is a treat for the eyes and ears, too. One of the year’s best roguelikes, fans shouldn’t miss the chance to excavate all the treasures that Shovel Knight Dig has to offer.

Where Are Pearl and Marina in Splatoon 3?