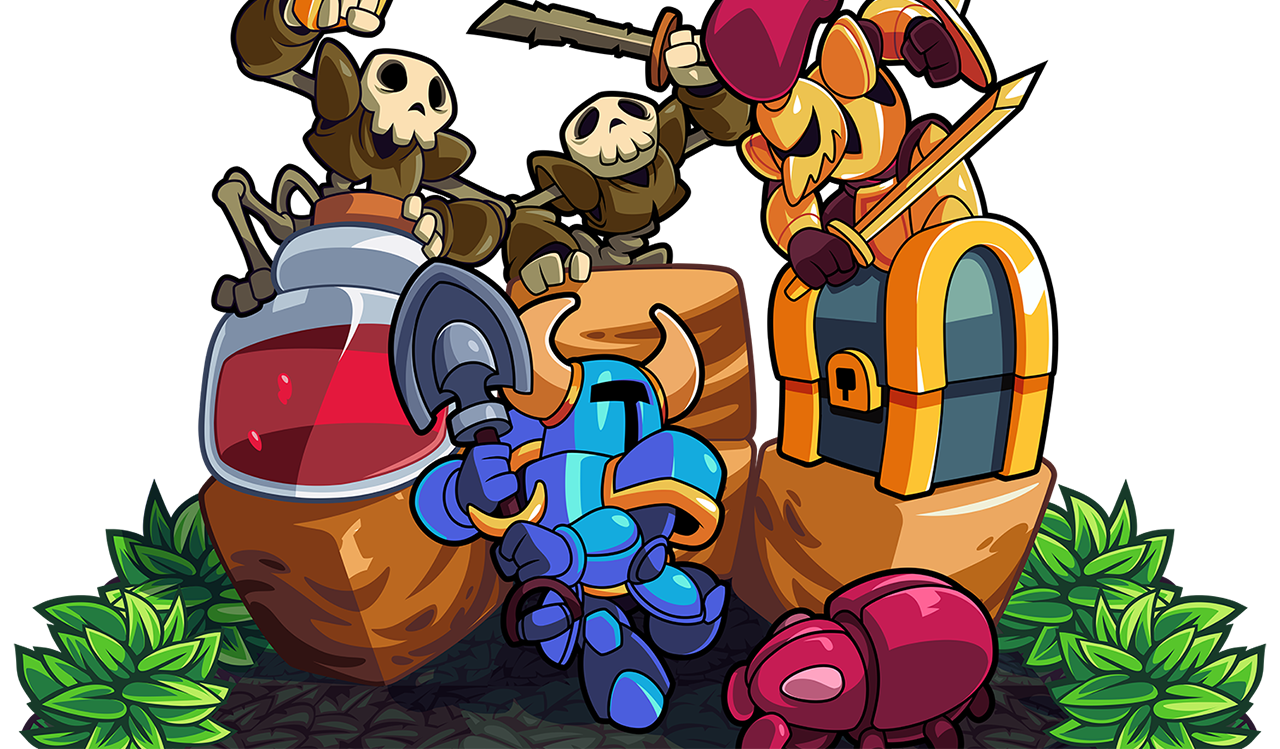 The time to grab a shovel and get puzzle-solving has finally arrived — but this time around do not expect to encounter any big industry faces on your adventure. Shovel Knight Pocket Dungeon sadly does not include any intellectual property crossovers with characters not owned by Yacht Club Games. However, there are still two guest characters stashed away in the franchise’s latest title that have important ties to the famous indie adventurer. Puzzle Knight’s original protagonist Tipp and Shovel Knight: Dig’s new character Scrap Knight both stand in as Pocket Dungeon‘s current crossover-related content.

In previous releases of Shovel Knight, the crowdfunded side-scroller included platform-exclusive crossover characters to battle against. On PlayStation 4, Shovel Knight went head to head with Sony’s spartan demigod Kratos from the God Of War series. Meanwhile, on Xbox (and later various computer versions of the game), Shovel Knight would be able to test his skills against Rare’s retro Battletoads trio Zitz, Pimple, and Rash. Through both challenges, players would retrospectively be able to unlock version exclusive items being the Gravedigger Shovel and the Toad Gear armor.

The newest crossover characters in Shovel Knight Pocket Dungeon may seem pale in comparison to the major connections the original game added in for later releases, but they also should not be discounted for their indie status. Tipp and Scrap Knight may not offer the epic optional battles that Kratos and the Battletoads previously brought, yet they are certainly not two nobodies to turn away from.

Shovel Knight Pocket Dungeon’s first crossover character is actually a prominent human-like knight the player meets during the opening moments of the game — and an extremely helpful one at that. While he may not play a major role in the overarching plot, the tipster appropriately named Tipp has a long history outside of just standing around the hangout to teach players how to overcome dungeon obstacles.

Long before Shovel Knight Pocket Dungeon was forged from a collaboration, developer Vine was working on a project named Puzzle Knights. Prior to Yacht Club Games discovering the project on Twitter, one brave and knowledgable hero ventured through Vine’s original vision of a rougelite falling block puzzle hybrid world; of course, that hero was the one and only Tipp. Despite Tipp not being playable in Pocket Dungeon, there are more than enough reasons as to why the adventurer knows so much about conquering the chibi landscape he resides in. Vine’s social media accounts and website still have footage of Tipp in action as he ventures through an early version of Puzzle Knights. Tipp and his color variations were also simply called “Squire” during this period of Puzzle Knights’ development.

Speaking of the color variations, Tipp is not the only character from Puzzle Knights who was entirely reworked into Pocket Dungeon‘s world. The character’s alternative palette is used for his brother named Kee who hangs out in Chester’s Shop at the campfire. There may not be too much characterization for Tipp and Kee, but players should absolutely bump into the two every now and then to discover more about them (and some tips about playing Pocket Dungeon, of course).

In contrast to Vine’s throwback creation, Scrap Knight stands at the opposite end of the spectrum from Tipp. In the same vein as Corrin appearing in Super Smash Bros. for Wii U & 3DS before the worldwide release of Fire Emblem Fates, Scrap Knight is Shovel Knight’s first instance of a promotional character for an upcoming title. The newest knight is set to play a larger role in next year’s platforming title Shovel Knight: Dig.

Scrap Knight is said to be clever and resourceful with her tools, yet quite shabby and has a strange taste in food. With a picker in hand and an enormous sack on her back, the female knight is a scavenger of the landfills below the Earth. Scrap Knight is said to be one of the Hexcavator’s most valuable assets as her specialty is being able to find anything. Her powers in Shovel Knight Pocket Dungeon may not accurately represent her skills, but she does stand out from the rest of the game’s cast. Scrap Knight holds the ability to pick up and place enemies in Pocket Dungeon.

While we do not know too much about Scrap Knight’s story, readers of Yacht Club Games’ official blog were given some details about who the female treasure hunter is. Scrap Knight is a member of the Hexcavators, Shovel Knight: Dig’s main antagonist group who is led by Drill Knight. It is unknown what the exact motives of the Hexcavators are, but what we do currently know about the group is that Drill Knight and his followers are attempting to pull off a massive digging scheme.

In our recent interview on the NXpress Nintendo Podcast with Yacht Club Games’ Celia Schilling, the marketing manager explained that “you never know” when a studio may approach the Shovel Knight team for a potential crossover — and of course if they have the time to include such a collaboration. Until the folks at Yacht Club Games dig into more of those rare Shovel Knight: Dig details next year, you can start exploring the miniaturized depths with Scrap Knight and Tipp now in Shovel Knight Pocket Dungeon. In the meantime, let’s all hope we will eventually see some mind-blowing crossover come out of the game’s DLC.