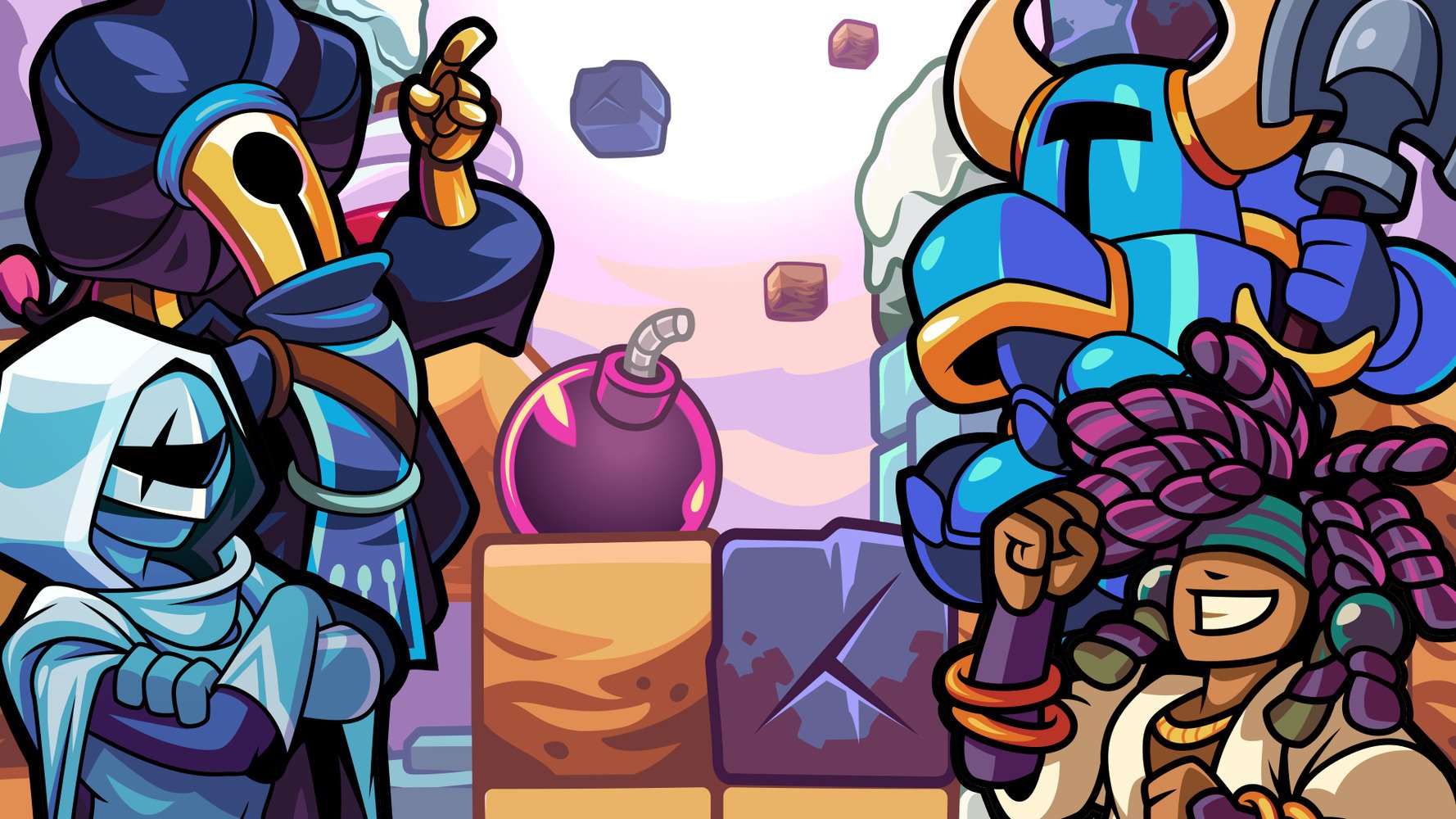 Since changing the indie game landscape with 2014’s Shovel Knight, developer Yacht Club Games has done a little bit of everything: they’ve expanded their hit platformer into an expansive franchise, collaborated with dozens of developers on cameos and crossovers, and have recently ventured into publishing the works of other independent developers. With the upcoming Shovel Knight Pocket Dungeon, though, they’re digging into new territory altogether.

For the first time, Shovel Knight Pocket Dungeon sees this series depart from its familiar 2D platforming roots in a favor of a more puzzling, brainteasing blend. “We’ve taken everything that we love about falling block puzzles and mixed it together with our love of roguelikes,” says Celia Schilling, Head of Marketing at Yacht Club Games, speaking to Goomba Stomp on a recent episode of the NXpress Nintendo Podcast. “It’s like a love child of everything we enjoy about those two genres.”

The result? A game that may even be described as a new genre altogether. Yet Yacht Club didn’t embark on this new project on their own: Pocket Dungeon is the result of a collaboration with solo indie developer Vine, whose work on a puzzle game of his own would provide the perfect basis for Shovel Knight’s next adventure. It’s the synergy that came from Vine’s talents combined with Yacht Club’s expertise, passion, and resources, Schilling says, that made Pocket Dungeon possible.

“The game bizarrely fit so well with the Shovel Knight genre.”

The opening moments of Shovel Knight Pocket Dungeon make one thing clear: despite the radically different gameplay, this is a Shovel Knight game through and through. When Shovel Knight gets entrapped in the miniature world of the “pocket dungeon,” he finds himself in a strange yet oddly familiar place. While the gameplay will have players clearing out rows of enemies and obstacles rather than jumping from left to right, longtime fans will find plenty to recognize and appreciate: the series’ hallmark pixelated character art, quirky dialogue, and heroic chiptune soundtrack are all present and accounted for.

It may be all the more surprising, then, that Pocket Dungeon began its life as a different game altogether. It all started with Puzzle Knights, a game developed by Russell Rafferty—Vine’s sole developer—that mixed block-falling puzzling with dungeon-crawling action. As the developer promoted the project with daily screenshots and gifs on Twitter, the game started gaining traction, often garnering hundreds of likes with each post. This popularity eventually caught Yacht Club’s attention—and they immediately saw its potential.

“The game bizarrely fit so well with the Shovel Knight genre,” Schilling says, noting that Vine’s work bore some uncanny (and convenient) similarities to the world of Shovel Knight with its cast of skeletons, blobs, and knights. Schilling adds that her team was especially enamored with the way that Puzzle Knight so elegantly managed to blend roguelike and puzzling gameplay: “We fell in love with it because it’s not just one thing we like, it’s two things we like—so let’s get on this!” Schilling adds.

With this ideal match in place, it wasn’t long before Vine and Yacht Club officially joined forces to develop Puzzle Knights into a full-fledged Pocket Dungeon. This expansion was no mere cosmetic upgrade with a Shovel Knight coat of paint; rather, the collaboration between the two developers “was a very hands-on process,” Schilling recalls. “Unlike previous ventures, the Yacht Club Games team was very involved with this one. We wrote the copy for all the dialogue in the cutscenes. We helped build the story. We gave tons of feedback on the art. Russell needed a little bit of help, so we built a team around that.”

Collaborating on Pocket Dungeon wasn’t just a project—it was a passion for Yacht Club and Vine alike. Yacht Club provided a pixel artist, designer, and other team members to help Vine see the game through to its conclusion, providing new perspectives up until the very last minute. “We kept on throwing in cool ideas. What if we did this? What if we added this? It’s so cool—and then we got to where we need to submit the game, and we were like, ‘Oh no! We have to stop adding things so we can ship the game.’”

“As it fits in the Shovel Knight timeline, only the future will tell…”

Shovel Knight Pocket Dungeon is built on a combination of two genres entirely new to the Shovel Knight series–puzzlers and roguelikes–but according to Schilling, Vine’s original work on the game poised it to be a natural addition to the Yacht Club’s flagship series.

“Shovel Knight is really wacky, it doesn’t take itself too seriously, and the humor and levity of the gameplay really show through with the personality of the IP. I think that fits so well with what Russell had built initially [in Puzzle Knights] that it created such a synergy with the genre, and that made it more palatable to be introduced to something new.”

As enthusiastic as the team may have been during development, though, development naturally posed challenges. Pocket Dungeon’s unusual, hybrid gameplay styles meant that Vine and Yacht Club faced a difficult question: how do you make such an original game accessible to new players, while still providing the level of challenge expected to engage committed fans of roguelikes or puzzle games?

Pocket Dungeon answers that question with one major mechanic: it gives players the option to enable infinite lives, allowing them to focus solely on solving puzzles rather than worrying about their health meter. Of course, this doesn’t eradicate the game’s challenge altogether—letting all rows of enemies or objects reach the top of the screen will still spell a game over just like in any other block puzzler.

For as pivotal as this mechanic is to Pocket Dungeon, though, it wasn’t always part of the game. “Initially, there wasn’t the infinite lives,” Schilling says, “but we asked, how do we make this more fun for players who are huge fans of the roguelike genre? A way to do that, and to make it more accessible and more fun, was to add infinite life. So, that came later in the development process.”

Ultimately, this mechanic is tied to a much larger priority. “Our focus is always on, how can we make this more fun? Because that’s the reason why we play games,” Schilling elaborates. “But that’s a different story when people play the super difficult games for fun—even they’re having fun with that, too. We had to ask, how do we have each character and each level and each experience in this game be more enjoyable? Having that balance where the player could choose themselves just made the most sense for us. Otherwise, if we’re forcing them to go into one type of situation, then they might not enjoy it, hit a wall, and stop playing—that’s why we customized it [the lives system].”

“It’s just another universe that Shovel Knight could be in.”

One place where Pocket Dungeon continues to depart from other titles in the series is its visuals. Leaving behind the traditional 16-bit visuals of the mainline Shovel Knight games, Pocket Dungeon introduces a chunkier yet adorable graphical style. Schilling says this shift is only natural: “It goes back to the name, Pocket Dungeon. Everything about it is small and cute, like you can fit it in your pocket.” Ultimately, it ties back to the series’ relentless versatility: “Shovel Knight is an all-encompassing franchise, so it’s just another universe that Shovel Knight could be in.”

But will other universes find their way to Shovel Knight Pocket Dungeon? The Shovel Knight series has already made a name for itself with plenty of huge crossovers in previous games, such as Kratos in the PlayStation version of the original Shovel Knight. While Schilling notes that Pocket Dungeon already features a crossover with another Yacht Club character–Scrap Knight from the upcoming Shovel Knight Dig–she’s leaving the door open about additional collaborations. “For outside IPs, we’ll see in the future…the team’s usually on board [for crossovers], but it just depends on if we have the time.”

Shovel Knight Pocket Dungeon presents an exciting variation on one of the most beloved indie series around, and with Shovel Knight Dig as well as a myriad of inevitable sequels on the way, there’s no telling how deep the series can keep digging. While Yacht Club may not be ready to share too much about what the future holds for Shovel Knight after Pocket Dungeon, Schilling says that one thing certainly holds true: “We plan on making Shovel Knight games forever and ever. As for what our plan is—it’s just whatever sounds cool and what sounds fun to make.”

Special thanks to Celia Schilling for her time. This is only part of the conversation – to hear more about our discussion of all things Pocket Dungeon and Yacht Club Games, tune in to the latest episode of the NXpress Nintendo Podcast!