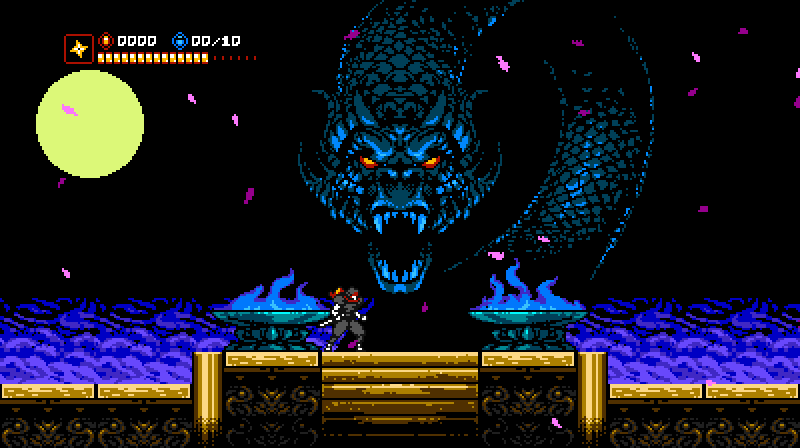 Cyber Shadow marks a turning point for Yacht Club Games. Starting life as a scrappy Kickstarter darling, Yacht Club made a name for itself developing the indie smash hit Shovel Knight and its many follow-up expansions. However, after several crossovers and new titles, the developer is now making its debut as a publisher with Mechanical Head Studios’ Cyber Shadow, an old-school 8-bit platformer that pays tribute to some of the greatest platforming ninja classics of the Nintendo Entertainment System. Speaking with us in the latest episode of the NXpress Nintendo Podcast, Yacht Club Games’ Marketing Manager Celia Schilling explains how this collaboration was a natural fit from the very start.

“I don’t know which of our team first saw Cyber Shadow, but I know one of us saw it on Twitter, and was like ‘Hey, that looks awesome!’” recalls Schilling.

Schilling says that her team did not initially set out to comb social media and discover a game to publish. Instead, “[The Yacht Club Games Marketing Team] saw that it fit the things that we really enjoy ourselves. And not only did we want to play it, but we wanted to help them out and see if we could help make this into something amazing.”

“We treat [Cyber Shadow] like how we would market our own games.”

Although Cyber Shadow’s solo developer, Aarne Hunziker, was initially hesitant to team up with a publisher, he and Yacht Club eventually decided to collaborate. From the start, Yacht Club and Mechanical Head Studios didn’t stick to the typical publisher/developer dynamic. Instead, Cyber Shadow was mostly complete by the time Yacht Club became involved. Rather than push the almost-finished game out the door, the publisher chose to provide personal feedback to gradually refine the game.

“With certain publishing, you can just take the game as it is, and you just throw it out in the world. And you’re like, there you go,” Schilling says. “But we like to have a hands-on approach, we treat it like how we would market our own games, but with the creator’s vision. So it’s one of those things where we did give advice on certain levels, we did review leveling and giving [Aarne Hunziker] feedback. And marketing-wise, we cultivated his vision to help push it out. That’s what differentiates our experience and our collaborating with him. But with everything, like design, Aarne has his final say of how he wants something.”

Cyber Shadow is just about as retro as it gets when it comes to game design, and Yacht Club Games knows a thing or two about developing old-school throwback platformers. Not only did the team have the smash hit Shovel Knight and its many follow-ups under their belts when it came time to collaborate on Cyber Shadow, but they also had prior experience working for other developers as well. According to Schilling, this level of professional expertise played a major role in polishing Cyber Shadow into its current state.

“Something to keep in mind is that [at] our team, we all have previous game experience,” Schilling clarifies. “So it’s not just like a post mortem of Shovel Knight. It’s like taking everything you’ve learned and everything you know about game design and applying it to whatever project you’re working at. I believe that experience stacks. So I’m using the judgment and knowledge of our team and our specific categories of level design and how things should flow applied to advising for Cyber Shadow.”

Schilling summarizes her point concisely, saying “We try to give the best advice we can as well as what we like to see and play through with games. So it’s like, what feels good as a gamer as well as a developer.”

One area where the game seeks to please both player and developer is its difficulty. In a market where countless retro platformers attempt to water down their gameplay for a modern audience, Cyber Shadow stands out. Not only is it already a tough game, but without any sort of easy mode, there’s not much getting around its hardcore challenge. Even Schilling admits she was “personally a little scared” that players would be turned away by its high difficulty level.

“But the thing is, it is difficult, but it isn’t cruel,” Schilling adds. She highlights that the game is filled with modern conveniences like unlimited lives and plentiful health refills whenever needed, allowing players to get the help they need at any time. Rather than a simple easy mode, Cyber Shadow instead opts for such quality-of-life improvements that make the core experience accessible to modern players.

“Not only can we give some input in the game, but we can also help advocate for it.”

Although the difficulty remains squarely in the retro camp, one area that Cyber Shadow far excels past its predecessors is its storytelling. Cyber Shadow tells a surprisingly complex tale of love, loss, and societal collapse. It’s a dense sci-fi story filled with surprising revelations, deep character relationships, and a hefty helping of backstory. While plenty of narrative is conveyed in the game itself through NPCs and mid-level computers, Schilling says that players are barely scratching the surface of the full story.

“What you guys get in Cyber Shadow currently is only 25% of the story that Aarne [Hunziker] had written for it,” Schilling says. She highlights that there are countless details about the game’s world and the characters that inhabit it that have yet to be revealed. “Aarne has so much backstory for Cyber Shadow. I remember we were working on the character profiles for it and I was like, ‘Okay Aarne, tell me more about [player character] Shadow, like what does he like to do for fun?’ And he was like, ‘Shadow, obviously, he has a sensitivity to essence. But before he went to the dojo where he met Master, he went on a journey of solitude to make sure he wasn’t being corrupted.’” This is just one example Schilling shared with us – whether the full story will ever be completely revealed, at this point, remains in the developer’s camp.

Yacht Club not only brought years of development expertise to Cyber Shadow, but they also provided ample resources and connections to give the game a wider audience. While Hunziker initially had a limited release in mind for Cyber Shadow, Yacht Club was able to bring the game to a greater number of players across console and PC.

“What’s great about being a position of a publisher is that not only can we give some input in the game, but we can also help advocate for it,” Schilling explains. “And we do have a relationship with Nintendo, PlayStation, and Xbox, as well as Steam, Humble Bundle, and GOG.” Ultimately, Schilling says that publishing the game was a process of “opening the doors” for Cyber Shadow rather than limiting the game to any one platform.

Playing Cyber Shadow makes it immediately clear that the game is a pure labor of love, and after our conversation with Schilling, it’s clear that there was just as much passion on the development side as well. Schilling herself is a lifelong fan of retro games, so it’s understandable when she describes how satisfying it’s been to work on something like Cyber Shadow. “To be able to market something that has such a throwback to the classic 8-bit gaming – it’s really great.”

Special thank you to Celia Schilling for her time. This is only part of the conversation – to hear more about our discussion of all things Yacht Club Games and Cyber Shadow, tune in to the latest episode of the NXpress Nintendo Podcast below!