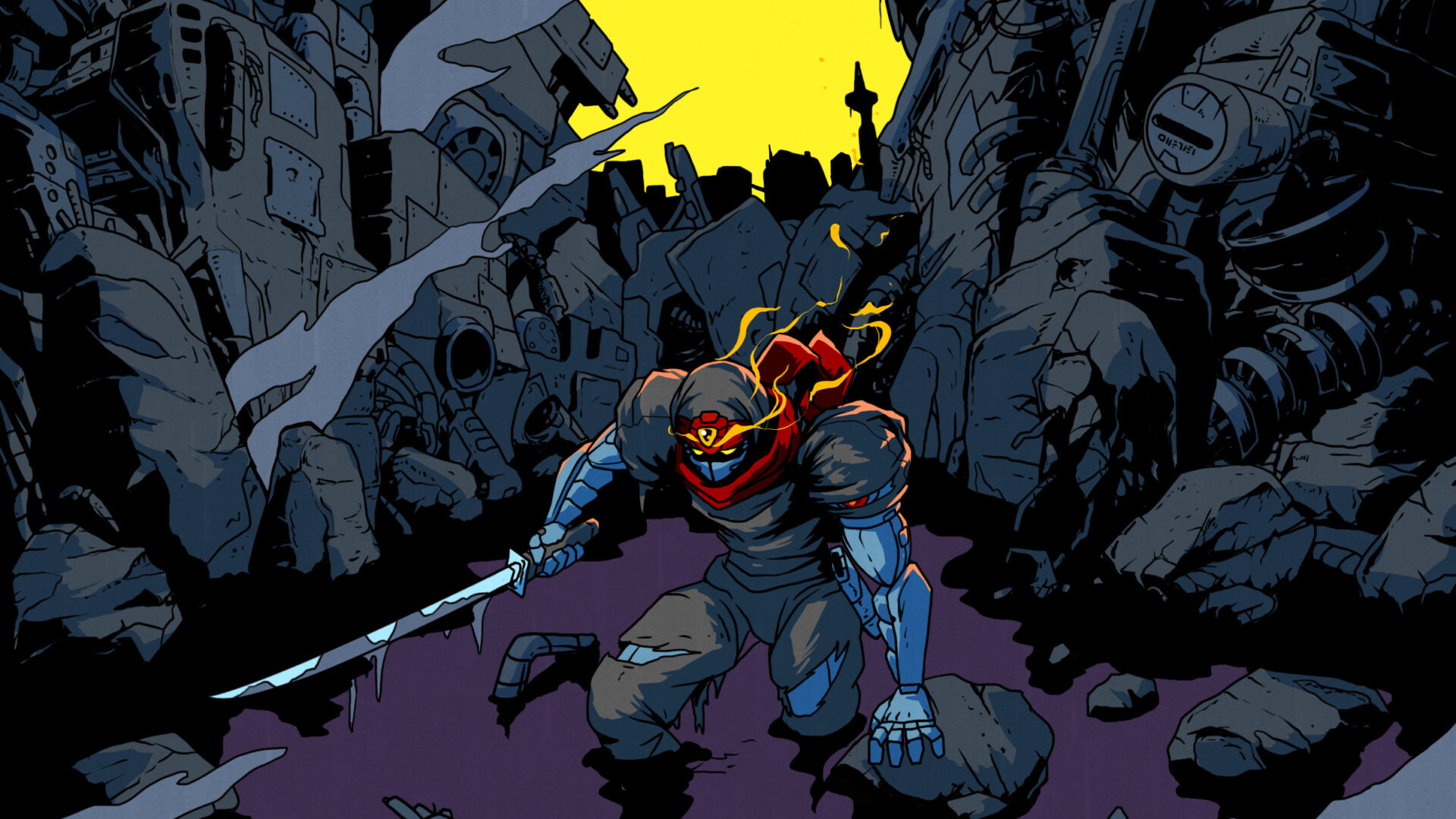 There are countless retro games on the market, but few stay as true to their inspirations as Cyber Shadow. Designed in the vein of NES action platformers like Ninja Gaiden and Shadow of the Ninja, Cyber Shadow does not shy away from old-school difficulty. Filled with ruthless enemies and challenging level design, Cyber Shadow asks a lot of its players – but crucially, it makes a handful of modern concessions. It tempers its retro brutality with forgiving mechanics and solid controls that make the game palatable to modern players, letting it carry on the legacy of the games that inspired it without bringing any of their frustration with it. It is a tough experience, but as it delicately balances uncompromising retro brutality with modern sensibilities, it creates a deeply satisfying platformer unlike anything else on the market.

Cyber Shadow opens with a familiar premise. It follows a lone warrior named Shadow, a member of an ancient ninja clan. After a long slumber, Shadow awakens to find the world being torn apart by an army of evil robots, spurring him to set out on a quest to find the remnants of his clan and reunite with his mysterious Master. However, it’s not long before wrinkles emerge in this plot as more details slowly reveal the true nature of your fight. The narrative gradually shifts from a simple quest for justice to a personal tale of love, loss, and family.

Deeply cinematic and surprisingly dense with lore, Cyber Shadow’s narrative is far more complex than what might be expected for an old-school style platformer. However, its wealth of dialogue and beautifully rendered Ninja Gaiden-style cutscenes lend a level of grandeur and worldbuilding to the game. Even if the sheer amount of lore can sometimes feel overwhelming and even a bit convoluted, its deep worldbuilding gives a greater sense of urgency to Shadow’s arduous quest. Dying hundreds of times at the hands of evil robots feels far more worth the trouble when you understand the high stakes at hand, after all.

Let’s not beat around the pixelated bush – Cyber Shadow’s gameplay can be brutal. I died hundreds upon hundreds of times over the nine hours it took me to finish its campaign. Like the retro classics before it, Cyber Shadow delights in pushing players to their very limits. It hurls projectiles, enemies, and obstacles at you from all angles on a near-constant basis, while every level bursts at the seams with new and progressively deadlier obstacles.

Yet Cyber Shadow never feels unfair. With frequent checkpoints, endless lives, and dependable controls, the game always equips you with everything you need to overcome each stage. Cyber Shadow is never insurmountable. Instead, it dares you to make the most of every tool in your arsenal to fight your way to victory. Every failure is your own fault, rather than the result of cheap tricks or unbalanced level design on the game’s part. There’s nothing stopping you from hurling yourself against its toughest roadblocks time and again, learning a bit more from every death.

This flexibility ensures that Cyber Shadow becomes addictive, rather than frustrating. Even if I died dozens of times on the same obstacle, it still felt exhilarating to gradually get better each time, moving one step closer toward perfecting my run and reaching the next checkpoint. The game encourages creativity and patience when it comes to overcoming its expertly designed challenges, and that simple philosophy makes all the difference when progressing through its levels.

Cyber Shadow boasts a brilliantly steady pace that consistently ramps up the difficulty while growing your capabilities at the same time. In its early levels, your moveset is limited: you can run, jump, and slash. You fight your way through linear levels, chopping down any enemy in your path and fighting your way to the boss waiting at the end. Over the course of the campaign, however, you’ll discover a huge range of abilities that fundamentally change the way you play. You gain long-range shurikens, hyper-speed dashing, and split-second counter-attacks, to name only a few. Each ability gives you new ways to overcome the obstacles before you, and learning to make the most of your upgrades is consistently gratifying.

As your abilities expand, so do the game’s levels. Each of its ten interconnected chapters feels completely distinct from the rest. It’s no exaggeration to say that every level offers a completely different experience from the one before it, boasting its own set of unique new enemies and gameplay gimmicks. One stage might have you sneaking into a high-security factory, whereas another will see you zipping through a ruined city on a motorbike. No matter what form each level takes, Cyber Shadow constantly delivers by sending you through challenging yet fair playgrounds that put your abilities to the test. You’ll never know what’s around the next corner, and that level of sheer variety and unpredictability is endlessly delightful.

Most importantly, Cyber Shadow is rock solid mechanically. Every mechanic feels perfect to pull off, from the simple act of movement to more complex actions like counters and projectiles. Even if some of these later abilities take some getting used to at first, the controls as a whole remain supremely precise and responsive. No matter what obstacle you face, the game equips you with the means to overcome it with style and grace. Running and jumping carries the ideal mix of weight and momentum, such that it’s easy to gain speed without losing control. Cyber Shadow has a level of fluid responsiveness that’s sorely lacking in the retro games that inspired it, adding an element of refinement that makes gameplay a pleasure. There’s no denying that completing the game can feel like an uphill battle, but with dependable mechanics and robust abilities in your moveset, the game gives you a fair shake at all times.

It’s an unfortunate reality that Cyber Shadow’s high level of difficulty will ensure that it’s not a perfect fit for every kind of player. Its intense challenge can require patience and a willingness to build up the skill to keep pushing forward. Players who expect a challenge along the lines of Shovel Knight may find the game too brutal for their liking. However, anyone who’s up for the task will find plenty to love in Cyber Shadow’s brutal yet fair gameplay that only gets better as your skill increases.

However, players of all skill levels will find something to appreciate with Cyber Shadow’s presentation. It beautifully recreates and refines the aesthetics of the 8-bit action games that came before it, but it’s the modern touches that truly make the game look so unique. Technical additions like 3D graphical elements, bright and vibrant color palettes, complex animations, lush character portraits, and parallax backgrounds all serve to elevate Cyber Shadow above its inspirations without losing sight of its charming retro spirit. All these technical effects serve to enhance the already brilliant art direction, as the game is filled with beautifully designed characters and robots that look like they walked straight out of an 80s comic book.

Finishing off the package is Enrique Martin’s glorious chiptune soundtrack, filled with incredible earwormy melodies supported by thumping, pulse-pounding basslines. Even if the music is constrained by the limitations of the NES hardware, Martin’s compositions make the most of the few resources available to them. Countless songs from the game remained stuck in my head even days after I’d finished playing. The soundtrack is an excellent creation in its own right, one that gets even better when paired with Cyber Shadow’s breathless gameplay.

Polishing the Classics to Perfection

Cyber Shadow is the best kind of love letter to the classic action platformers of the 80s and 90s. It doesn’t attempt to whitewash those games’ legacies by dumbing down their gameplay or simplifying their mechanics. Instead, it recreates them in all their white-knuckled intensity, sprinkling in just enough modernizations to let this classic gameplay shine without being bogged down by any of the frustration associated with it. There’s no denying that it’s a tough game that will inevitably turn some players away with its high level of difficulty. Nonetheless, between its deep story, incredible aesthetics, and heart-pounding gameplay, Cyber Shadow is a deliriously challenging yet delightfully rewarding experience that will be sure to satisfy action fans new and old.