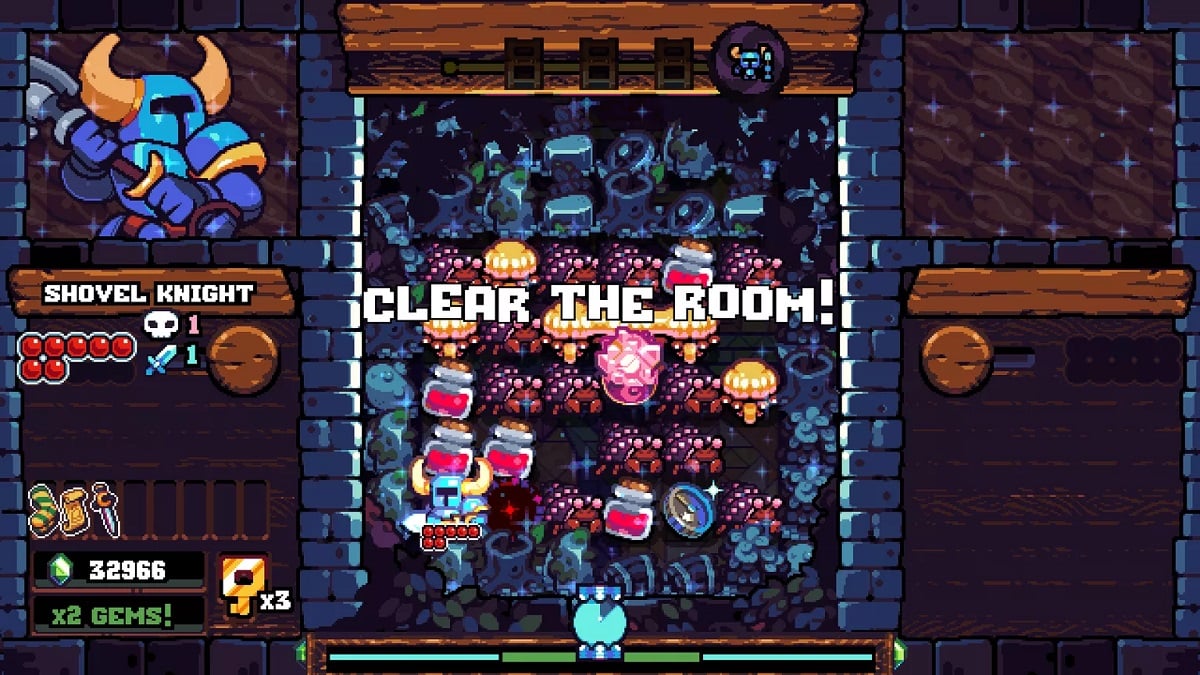 The movement to make games more accessible for players of all needs has been steadily picking up steam over recent years. First spurred by beloved touchstones like Celeste and later by big-budget efforts such as Gears 5 and The Last of Us Part II, more and more developers are allocating time and resources to make sure that all players can enjoy their work. Now one of the most successful indie franchises of all time is hopping aboard the accessibility train in a big way with its latest outing: Shovel Knight Pocket Dungeon.

The Shovel Knight series from Yacht Club Games is not wholly new to accessibility options, though they were never as much of a focus as they are now. A 2019 update to Treasure Trove, for instance, allowed players to set the intensity of screen shake, limit on-screen flashes, and opt-in to a colorblind mode. With Shovel Knight Pocket Dungeon, however, Yacht Club Games has implemented a diverse set of options that can drastically change the experience for those even without motor and audio/visual impairments.

In an Options menu available both from the title screen and the camp, players can customize their single-player Adventure runs to a surprisingly deep degree. Basic options like HP and attack damage adjustment are present, but the ability to adjust the speed of rounds is the real highlight here. Pocket Dungeon is undeniably tough whether playing it as a roguelite or a traditional puzzle game (something that can be changed at any time between runs), but the default speed at which blocks drop makes the puzzle mode especially grueling. Being able to set it to .5% or even .25% makes rounds much less stressful and should serve those who can’t react as quickly as others quite well.

Aside from these options, Pocket Dungeon also features fully remappable controls on both keyboard and gamepad and allows players to turn off boss battles altogether, eschewing cutscenes and lore in favor of a more traditional puzzle experience. Unfortunately, enabling any of these aside from the remappable controls comes at a cost: no feats (in-game achievements) are able to be earned during runs with increased attack damage, increased HP, slower speed, or no bosses.

This is sure to be a point of contention as some players who need these turned on will never be able to 100% the game, whereas those looking for more of a challenge won’t want their feats “devalued.” After all, Pocket Dungeon directly caters to those players too with options to increase the speed of rounds and turn off both items and relics (the latter of which severely ratchets up the difficulty of any run since relics offer key permanent buffs).

No matter which side of the fence you fall on, there are still a couple clear improvements the team at Yacht Club can add down the road to make Pocket Dungeon even more accessible. For one, players should be able to adjust these options during runs, not just once they return back to camp. This would make finding the perfect gameplay balance much easier instead of having to try settings, abandon a run and adjust, try different settings, and repeat. It would also be great to have even more granular options such as the ability to disable tiles falling faster upon death, or even carrying over the colorblind mode from Treasure Trove. Small touches like these would go that much further in letting players truly customize their gameplay experience.

In the end, Shovel Knight Pocket Dungeon is a huge step forward for the franchise in terms of accessibility. It is clear that the team cares about bringing this next step forward for the series to as many different types of players as possible. With some expanded options and tweaks to the feat system, Pocket Dungeon should serve as a prime accessibility foundation for all Shovel Knight titles going forward.