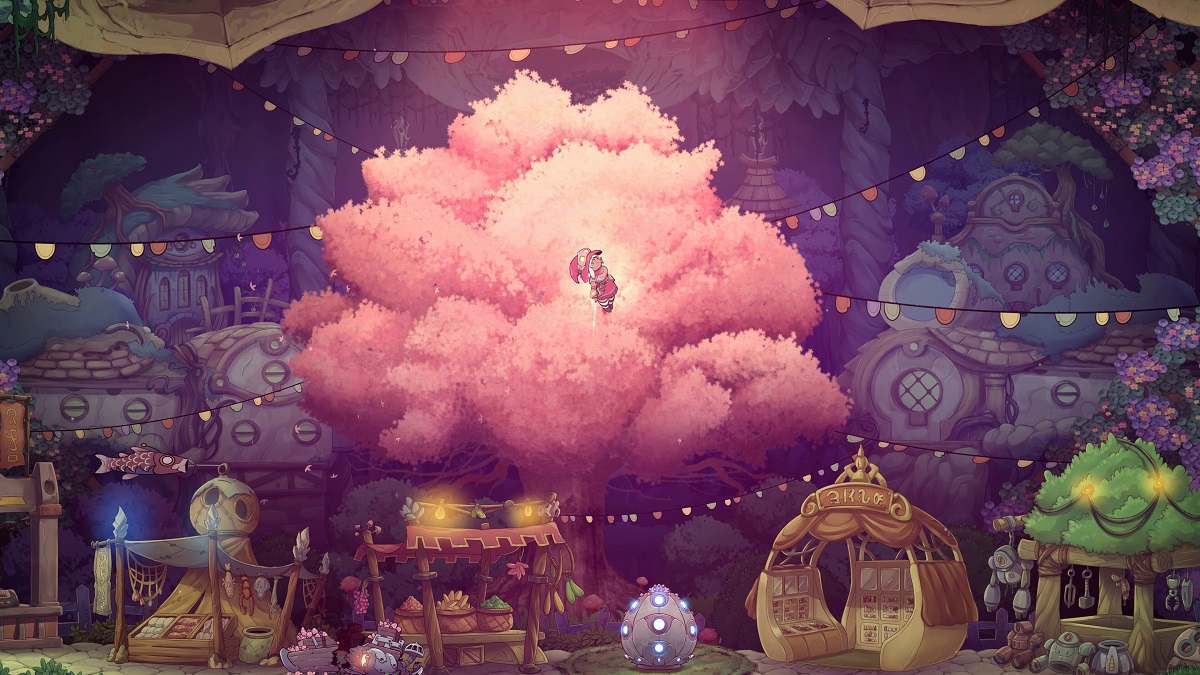 Be it sky-high ambitions that haven’t been snuffed out by the industry yet or a rare willingness to experiment, there’s something special about a rookie indie team’s first project. The Knight Witch is nothing like that; it’s an incredibly polished shoot ’em up/metroidvania hybrid that looks, sounds, and plays so smoothly that it’s a wonder a small independent team made it. While it may feel a bit generic at times in terms of presentation, The Knight Witch is anything but forgettable thanks to a unique take on deckbuilding and some of the best writing seen in an indie game this year.

Unlike many shoot ’em ups, The Knight Witch is story-first. After years of using and abusing the planet, the ruling class faced an uprising lead by The Knight Witches, an elite task force that had consumed Gaia’s tears and been granted special powers like flight and the ability to cast spells. This powerful four-person unit decimated the ruling class’ ranks and put an end to the war. Though the planet was already beyond saving, they discovered a series of tunnels that lead to an underground city, and what was left of the world’s population migrated underground.

Fast-forward fourteen years and The Knight Witches are legendary figures in society, especially Robyn, their captain. Enter the protagonist Rayne, a former Knight Witch trainee who, much like squibs in the Harry Potter universe, was unable to manifest her powers and thus had to sit on the sidelines during the war. This ends up being a fantastic perspective to play from; not only has Rayne moved on with her life and settled down with a husband on the outskirts of the city, but she also has history with and memories of the four heroes of legend. When the city suddenly gets attacked and citizens are captured, Rayne is pulled back into the spotlight she dreamt of (and had to put behind her) over a decade ago.

As someone who trained to be a Knight Witch but never used her skills out on the field, Rayne makes the perfect player character. The tutorial is natural and necessary on both ends; Rayne’s because she’s rusty, and the player’s because the combat system is a bit unusual. Instead of purely relying on classic shmup-style bullets, The Knight Witch incorporates deckbuilding elements via spell cards that act as special abilities. Three of an ever-growing number of slottable cards are able to be used on the fly as long as there’s enough mana (which is collected by dealing damage to enemies). Each card is assigned to a face button for easy access and has a mana cost associated with it. This is where the fun of deckbuilding comes into play. Is it worth slotting in multiple big-damage cards that cost three mana, or would it be smarter to only equip cards that cost one or two? Being able to experiment and customize the loadout so heavily lends combat just the right amount of personalization.

The moment-to-moment gameplay is a mesh of metroidvania level design and shmup combat. Labyrinthine passageways are dotted with everything from turrets and tiny bullet-shooting machines to substantial knight-like mechs that take serious firepower to topple. Skirmishes become a matter of quick reflexes, smart planning, and luck (since the three spell cards available at any one time are surfaced at random). This dance is manageable in many instances, but The Knight Witch suffers from a lack of difficulty scaling. Bosses and sudden horde encounters (referred to in-game as ambushes) start ridiculously tough right off the bat. There’s no chance to master the controls or build a deck powerful enough to counteract certain enemy waves, and the slow drip feed of health upgrades means that there’s not much room for error.

It seems like developer Super Mega Team was aware of these issues to some extent, since they included a couple of incredibly handy assists. Most immediately useful is an “instinct aim” function that auto-targets enemies at the cost of shots being slightly less powerful, alleviating the stress of having to simultaneously dodge dozens of bullets and shoot enemies. Then there’s the literal “Cheats” option in the menu that features a slew of game modifiers locked behind code inputs. These range from must-use assists like “Enemies sometimes drop health” to game-bending options like “Invulnerability” and “Glass Rayne (can only take one hit).” Though they aren’t assigned to a formal accessibility menu, there’s no doubt that cheat guides will be available online day one to reference.

While the combat difficulty may be divisive amongst players, The Knight Witch’s presentation values are indisputable. Its environments are flush with color and intricate details that illustrate the realities of a slapdash underground civilization. Seeing previously-visited locations in the background of new areas never gets old, and the sheer crispness of the art truly sings on 4K displays. The character animations may be a bit stiff and generic, but the character designs and dialogue portraits are so full of life and personality that it’s easy to overlook.

These designs meld perfectly with the writing, which is consistently entertaining and does a brilliant job of not only fleshing out side characters, but one-off NPCs as well. The star of the show, though, is Rayne. She shines especially bright as a protagonist, full of wit and genuine emotional outbursts that ground her as being relatable. There’s an option to “Take a breath and think” at every save point, and following every single story event Rayne can sit and deliver a new inner monologue about what just happened and the next goal she wants to achieve. It’s this attention to detail that not only lets Rayne’s personality shine, but also makes the story beats feel that much more impactful.

The Knight Witch is a stellar innovation of the shoot ’em up and metroidvania genres. There’s a wealth of secrets to discover, characters to befriend, and challenges to bang your head against. The inclusion of gameplay modifiers via a formal “Cheats” menu option is a wise addition, and the inclusion of deckbuilding feels natural and additive to the experience. Most of all, The Knight Witch sings because of the underdog story of its protagonist, Rayne, who’s fighting to fulfill a dream she’d given up on many years ago. Experiencing her redemption story makes saving what’s left of the war-torn world well worth it.