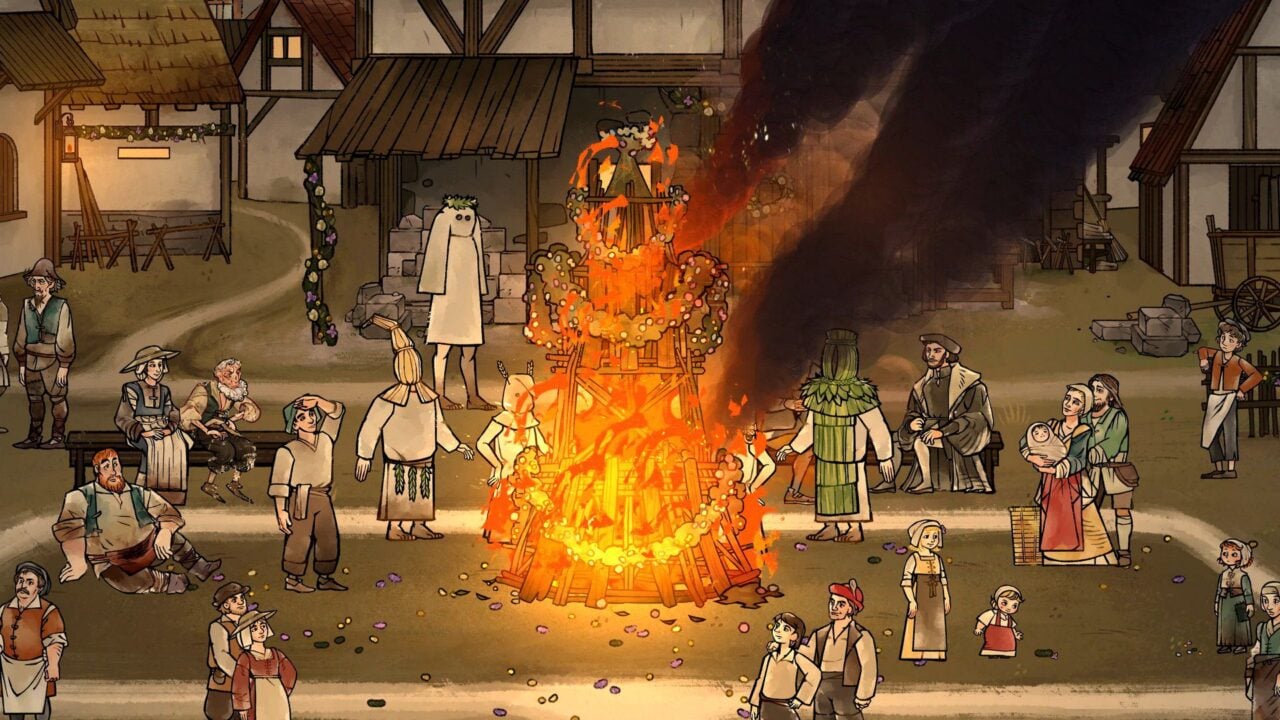 Explaining the Ending of Pentiment

Pentiment‘s ending plays on a twist that is almost unheard of in video games. Through the eyes of a traveling artist and a printer’s daughter, Pentiment shows how the first two decades of the 16th century changed the Bavarian town of Tassing. The latest and most peculiar in a long line of excellent Obsidian RPGs, Pentiment is a murder mystery that has no clear killers, only an unfortunate and unsuccessful mastermind.

Andreas’ investigation into the murders is a fool’s errand, that much is clear to anyone who finished the game. But is there really no clear culprit to Lorenz and Ottos’ murders? And is there a special reason behind the actions of the String-puller, the mastermind behind the purple letters?

Who Is the Killer In Pentiment?

The murders of baron Lorenz and Otto Zimmerman, taking place respectively in acts 1 and 2 of Pentiment, have no clearly identifiable perpetrator. This doesn’t mean that the person selected as the culprit is innocent, but rather that the player has no way of knowing. There is too little time to investigate and Andreas’ line of reasoning is more akin to that of a writer than of a detective. He, like the player, errs towards what is more interesting or more logical, not what is true.

Outside of video games, murder mysteries don’t always have one clear killer. As an example: Memories of Murder is a cult movie by Parasite director Bong Joon-ho where the identity of the killer is never revealed. The investigation, here, focuses on suspicious characters and clues pulled straight out of a mystery book, but those methods are inefficient in uncovering the mundane evil of real crime.

When it comes to video games, a medium where the story only progresses when an objective is completed, this twist is nearly unheard of. Still, this side of Pentiment doesn’t leave space for interpretation: whoever the player indicates as the culprit will die, and there is nothing in the investigation that reveals the real culprit. But even if players can’t find the hand behind the murders, they still get the chance to figure out who the mastermind is, the one who unearthed the past and stirred up the violence in the village.

The real mystery hides in the ending of Pentiment, and it isn’t about Tassings’ murders but about the red string that connects all of them. Throughout the game, before and during their investigation, players can find a few hints as to who is the so-called String-Puller and what their objective is. No hint will reveal the identity of the mastermind before the finale, but their motivation is a different story.

Players can find the following hints: cryptic notes in purple ink seem to be reminding villagers of their gripes with the victims; people have different ideas about the town’s history based on their pagan traditions, the roman ruins, and the abbey’s version of the story; the town people are divided into classes, with farmers at the bottom, the church at the top, and other citizens in the middle.

With those hints and a bit of creative thinking, players can figure out that the objective of the String-puller is to save the abbey and preserve the faith of the town. The identity of the mastermind remains instead a mystery until Pentiment‘s ending: it was Father Thomas who, by manipulating Sister Amalie through her visions, delivered the menacing letters in purple ink. He did accidentally kill Magdalene’s father and he poisoned the previous abbot, but he didn’t murder anyone else himself, leaving the dirty work to the townsfolk. He also didn’t anticipate that his actions would lead to the destruction of the church, as his true objective was to save it.

What Was the String-puller’s Objective?

Father Thomas’ objective in both murders was to stop the victims from revealing what they had learned of the origins of the town, which he believed would have meant the end of the church of Tassing. Baron Lorenz was killed because he owned a book about the history Tassing, in which the town saints and their miracles were revealed to be based on the roman gods Mars and Diana.

Otto had learned something just as dangerous but, unfortunately for him, immediately told Father Thomas. He was convinced that he found the head of Saint Mauritz, a piece to accompany the Hand of Mauritz, a relic of great religious importance. Otto believed this new relic to be a divine sign that his hatred of the current abbot was well placed, but what he had really found was the head of a statue of Mars, of which the Hand of Mauritz was also a part. Though he couldn’t understand its meaning, the god’s name was written on the statue’s helmet, and if found by others would have revealed the hand to have nothing to do with a Christian saint.

To conceal the roman origins of the town’s faith and rituals, Father Thomas killed many: Lorenz and Otto weren’t his direct victims, but the previous Abbot and Magdalene’s father both died by his hand. Many others died of hunger and cold, due to the stricter rules the church enacted after the baron’s death, while others were killed in the revolt that was caused by Otto’s murder. The church he tried to protect was lost to the flames, while the monks left the town to the rule of a nobleman.

In his last, desperate act, after Andreas and Magdalene found him in the roman ruins below the monastery, he hid the proof of the town’s history in the ground. Bringing down the only remaining pillar in the ancient house, he had the building bury him, along with the head of Mars and a mural representing the saints with their roman names.

The Real Choice of Pentiment‘s Ending

The last major decision the players will make in Pentiment is about whether to reveal to the town the origins of their myths. Whatever the players’ choice is, it will only affect how Magdalene paints her mural, while the town doesn’t seem to care much either way: the church didn’t need Father Thomas’ murders to be kept alive. Besides, the town always knew about the previous inhabitants of Tassing, and even understood their now Christian costumes to be as old as the roman ruins around them.