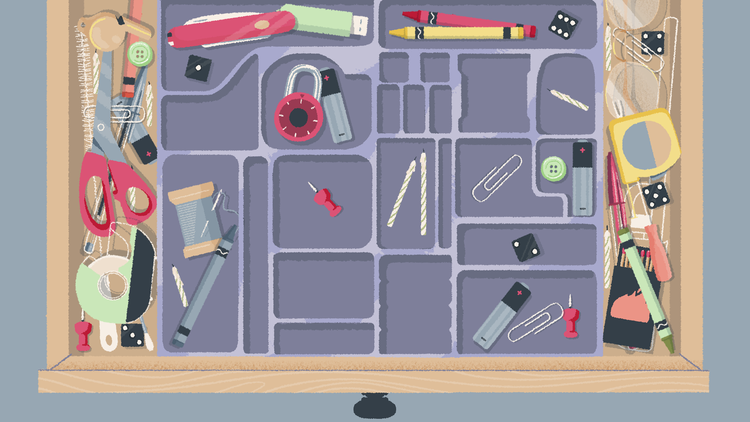 A Little to the Left — Indie Snippet

Every home, no matter how tidy, has that one drawer that ends up being a catch-all space for batteries, paper clips, pens, and the like. Garages always have a corner with a few half-empty paint cans, and kitchen cupboards inevitably have a stack of cracked bowls that should probably be thrown away. A Little to the Left is an indie puzzle game that celebrates little messes like these, and the tidying-up that (sometimes) accompanies them. While its puzzles can occasionally seem opaque, A Little to the Left‘s charming art style and multiple solution options help it to stand out.

A Little to the Left‘s approach is straightforward. The game is divided into five chapters, with several single-screen puzzles in each. Chapters are organized around specific themes, and each single-screen puzzle feels distinct. Importantly, each one almost serves as a litmus test, a window into the brain of the designers. Puzzles frequently have additional solutions than the obvious one, and discovering an alternate way to complete them is a huge part of the fun.

Players must figure out what the game is asking of them, which can be simultaneously gratifying and aggravating. The player may be presented with something as simple as a set of three cans of tomato sauce, a pile of rocks, or a disorganized row of game cartridges and are given no direction of what do next. By interacting with different objects and discovering the hidden pattern, players can solve the puzzle and move on to the next one. This is sometimes easier said than done, though no one puzzle will prove an obstacle for long.

Every puzzle in A Little to the Left can be solved quickly, though like a Magic Eye poster or a Rorschach test, solutions may not be immediately evident. Most objects on the screen can be interacted with in some way- solutions frequently involve turning an object a different direction, or sliding something over to a new location. They are logic puzzles where the player must intuit the logic being applied. This can feel enlightening: one particularly memorable solve involves organizing colored pencils by how sharp their tips are, then brushing away the pencil shavings.

For as fun and interesting as the puzzles are, players may encounter some hiccups. Solutions may seem completely inscrutable, even after interacting with everything onscreen. A Little to the Left extends two olive branches to help the stumped. There’s a hint system, which takes players to a sketchpad where a visual solution to a puzzle can be revealed with an eraser. Players can also let things lie, allowing them to skip a puzzle entirely with no consequences. At any point, players can return to a puzzle to seek additional solutions. The entire approach of A Little to the Left is extremely player-forward, which is a blessing compared to more linear puzzle games.

One of the best features of A Little to the Left is its daily challenges, called a Daily Tidy. These are extensions of the base game’s puzzles, giving the game additional longevity. There is something inherently satisfying about putting things in their proper place, but the real strength of A Little to the Left is how it allows players to approach puzzles at their own pace. Its aesthetics are genuinely soothing, and even the chaos element of a cat coming and messing things up occasionally comes across as charming rather than annoying. For a first project, Max Inferno has set the bar extremely high.

A Little to the Left is available on Switch and Steam.