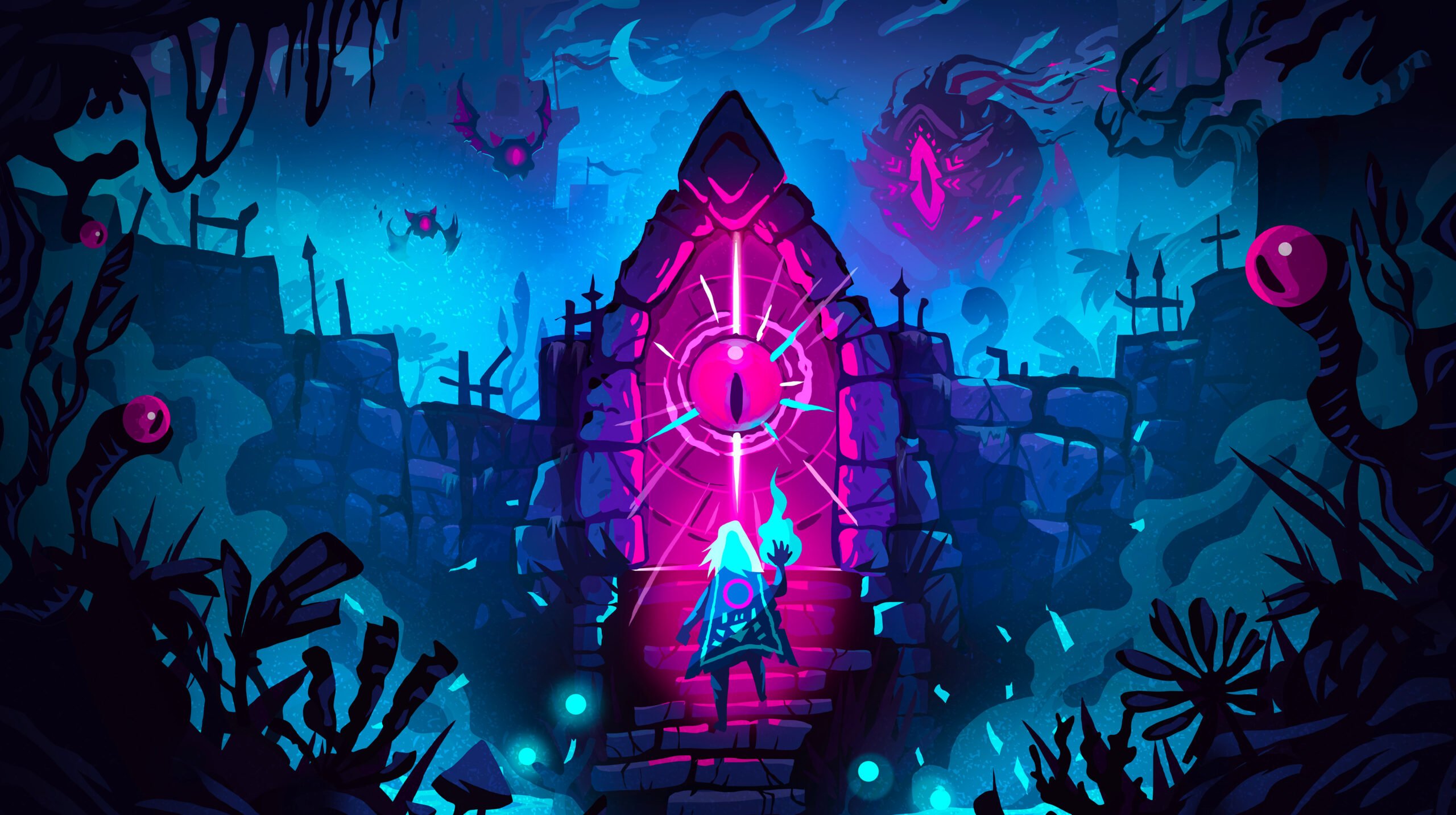 There is a delicate balance to strike in a roguelike game. The genre, featuring titles as diverse as the 2020 breakout hit Hades, the perfectly fine-tuned The Binding of Isaac, and lo-fi early access epic Caves of Qud, has plenty of appeal. Lone Ruin, from developer Cuddle Monster Games and Grapple Dog publisher Super Rare Originals, sets itself apart from its contemporaries with an inimitable sense of style. The neon-soaked environments and pulsing techno soundtrack are tremendous highlights of Lone Ruin, and even if the limited biomes and scant worldbuilding may ultimately leave players wanting more, the crunchy combat, included survival mode, and leaderboard score chasing are plenty satisfying.

Lone Ruin is laser-focused on doing a few things extremely well. The game thrusts players into the action immediately, with only a short, nonverbal animated intro to set the mood. Players control a blue-haired spellcaster who descends into a ruined city to solve the mystery of its decay. Doing so requires them to clear room after room of waves of enemies, dispatching them with found spells and upgrades that blast from the tips of the protagonist’s fingers. Rather than try and ascend to freedom, as in Hades, players are going down to see what there is to see.

However, story and narrative take a back seat almost immediately. Beyond the introductory cinematic and a single NPC who provides the player with their first spell before they make their pilgrimage, the world of Lone Ruin is surprisingly light on lore, at least in-game. There is no bestiary or spellbook full of descriptions. While not a dealbreaker, it seems a shame for a game this focused on style not to flesh out its world with a codex or even some boss dialogue.

That said, once players begin their descent, it’s a white-knuckle ride to the final level of the ruins. Even on the lowest difficulty setting (players can choose Easy, Medium, or Hard, with the primary difference being the number of hearts available at the start), every battle is tense and chaotic. Each run plays out differently, with players free to choose their starting spell (players also begin every run with a dash ability, though that can be swapped out or changed over the course of a run). Spells range from Chain Lightning, which jumps from one enemy to the next, to the short-range Scythe which has a powerful charge attack. Each spell is tied to a cooldown, and shortening the length of each cooldown by finding upgrades is key to success. Every spell feels varied, a credit to solo developer Hannes Rahm.

Mastering movement and memorizing attack patterns feels satisfying, but it’s a short-lived high. Lone Ruin, despite its multiple weapons and relics, lacks enough true variety to become a classic of the genre. There is only one biome, the titular Ruins themselves, and while individual rooms have different features like staircases to higher levels or bottomless pits to fall into, after a few playthroughs the lack of different locations feels noticeable. And while each of the three bosses (encountered after clearing a certain number of rooms) have memorable character designs and feel like harrowing bullet hells, the fact that there are only so many to overcome is a shortcoming.

Part of the fun of an action roguelike is creating a character build that feels broken, as if the player is getting away with something. Lone Ruin has a few weapon and relic combinations that are awe-inspiringly powerful, and scratch the itch of the power fantasy. Status effects like Burn or Chill combined with a relic-boosted Chain Lightning make enemies melt away, and finding a rare revival Ankh always feels like a blessing.

Players can also offload spells that aren’t working out for them at any time from the pause menu, meaning they have much more say in how a build is developing than might be expected from this type of game. Say an intrepid adventurer picked up the Barrier spell early on but have found themselves relying on dashing and dodging instead of hunkering behind an impenetrable block of ice; at the next shop (or anytime, really), they can simply pause, sell the spell for a tidy sum, and hope that the next spell they find is more useful.

The twin-stick controls of Lone Ruin discourage button-mashing, and force the player to master aiming. Finding the flow state of Lone Ruin is essential to racking up a high score in survival mode, and just might mean a better score on the leaderboards if the player decides to compare themselves to other players. This added outward-facing aspect of Lone Ruin is a nice nod to the communities that form around games like these, and encourage indie developers to stay involved with updates and outreach.

Even if the gameplay of Lone Ruin leaves something to be desired, there is no fault to be found with the art direction and music. Filter Hades through the chunky pixels of Hyper Light Drifter and add in a dose of Cyberpunk 2077‘s throbbing soundscape and bright neon, and you’ll approximate the look and feel of Lone Ruin.

While Lone Ruin may only have one flavor of environment to enjoy, it is rich in texture and feel. The crumbling pillars and massive coffins pose questions that are unfortunately never answered over the course of a run, but it can be fun to speculate. What are the Ruins, and why are they ruined to begin with? Who is the mysterious stranger who gifts the player their first spell? What truly lies in the depths of the Ruins, and where do the creatures that attack the player spawn from? Lone Ruin breezes past these questions, instead urging players to focus on survival at all costs.

Lone Ruin looks and sounds gorgeous, and plays great overall. It has some shortcomings, but for fans of the genre looking for something new to tide them over for the next big release, Lone Ruin is an incredible effort from a solo indie developer.