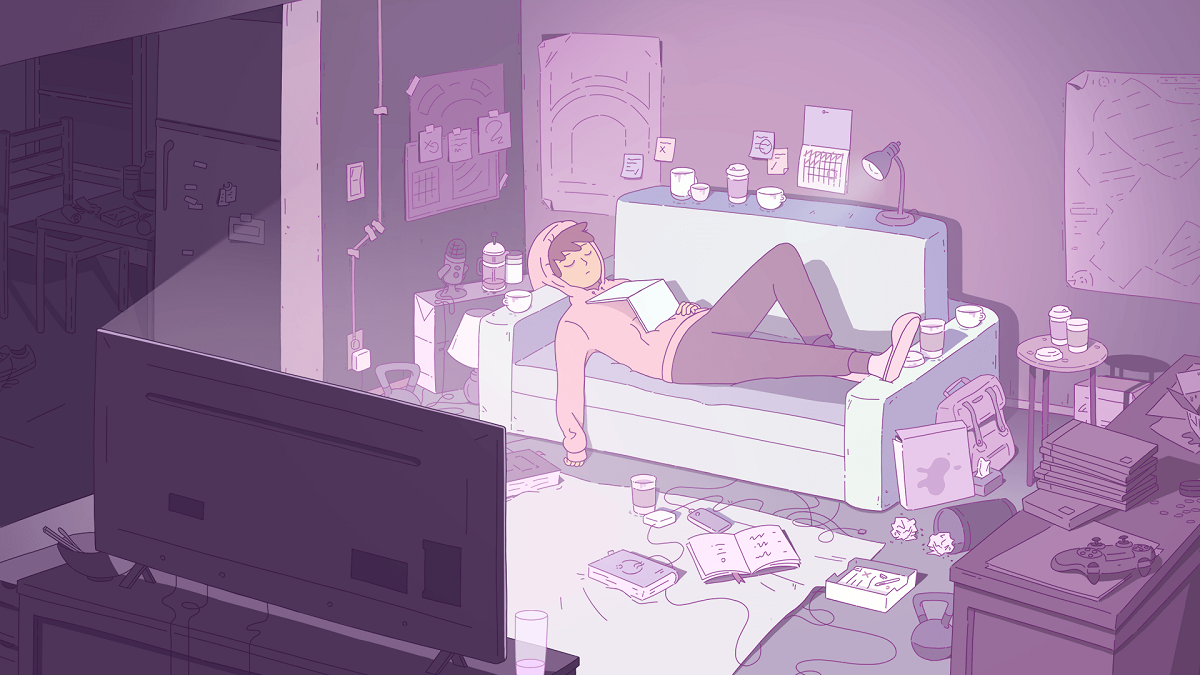 In an era of unwieldy UI and endless icons to manage, minimalist design sensibilities shine through in titles like Melatonin. Its dream-like aesthetic is pulled off perfectly from start to finish, and though the runtime is on the shorter side, the level of polish Half Asleep has managed to implement here is astounding.

The premise is simple: a young adult dozes off in his apartment and has dreams about various thoughts and pastimes, be it gaming, shopping, working out, and so on. Those dreams play out as rhythm game levels, each with unique rhythmic patterns to master and visual cues to learn. The variety is impressive; some levels are built around call and response, others operate on delay-based patterns, and a few of the more complex levels require trial and error to learn the ins and outs. The designs of the levels are also visually unique, with the dream premise allowing for imaginative takes on each theme.

Tutorials before each stage do an admirable job of explaining how that level’s patterns work, and players can practice endlessly before moving on to scored rounds. Get enough “Perfects” and a hard mode unlocks that ratchets up the tempo and introduces new patterns into the mix. There’s a genuine challenge here that truly tests the player’s knowledge of each tune.

The overall selection of music in Melatonin perfectly matches its aesthetic. Catchy songs are few and far between, but the mix of lo-fi and chill kawaii bass melds with the soft visuals to create a truly unique, subdued experience. That said, not all of Melatonin’s levels are created equal. While generally engaging, a couple of the levels can veer into monotony. The crane game level Desires suffers from this in particular thanks to long stretches of forced inaction, while the hypnosis level Mind nails its gameplay but lasts for too long.

Overall, Melatonin is a relatively slim package as far as content goes. Each dream sequence (or chapter, as they’re referred to in-game) contains four levels plus a remix level at the end. However, there aren’t any online leaderboards or even a numeric scoring system like in Muse Dash and Elite Beat Agents; performance is shown via a meter on the side of the screen and denoted by a simple star rating at the end (or planetary rings in the case of hard mode). That means after getting three stars in the 21 tracks (five of which are remixes), there’s not much in terms of replay value to keep players coming back.

Though the lack of social features like leaderboards may be a missed opportunity, it’s also what allows there to be an impressive suite of accessibility options. These are some of the best in the genre, letting players customize everything from allowing button prompts to remain on-screen beyond the tutorial round to a “Wiggle Room” option that increases the timeframe necessary to register a perfect hit. All of the options can be toggled on at any time (including mid-game) and there’s no negative to using them; no locked ending, no asterisk next to the score, nothing. So though the presence of these options is the antithesis of something like a leaderboard, the payoff is arguably worth it to make the game more enjoyable for all skill levels.

On a final note, Melatonin’s content offering could’ve been significantly bolstered by the included level editor, but it’s disappointingly barebones. There’re tools to add downbeats, offbeats, and tempo changes so players can make their own take on a given level. However, there’s no way to listen to the song and see how the beats line up in real-time, and no tutorial to explain how to best put a level together. Worst of all, there’s no way to upload levels or share them with friends. Heck, you can’t even save multiple edits of the same level for yourself; there’s just one custom slot available per song. As it stands, Melatonin’s level editor is more of a curiosity than something truly additive to the overall package.

Melatonin is a small slice of what Rhythm Heaven fans have waited years for. Developer Half Asleep nails a dream-like aesthetic through cloud-filled menu screens, soft pastel colors, and imaginative level designs. Though there are only around 15 stages to play through, the high presentation value and thorough suite of accessibility options more than justify the price of entry. Just know that you may wake up sooner than later.