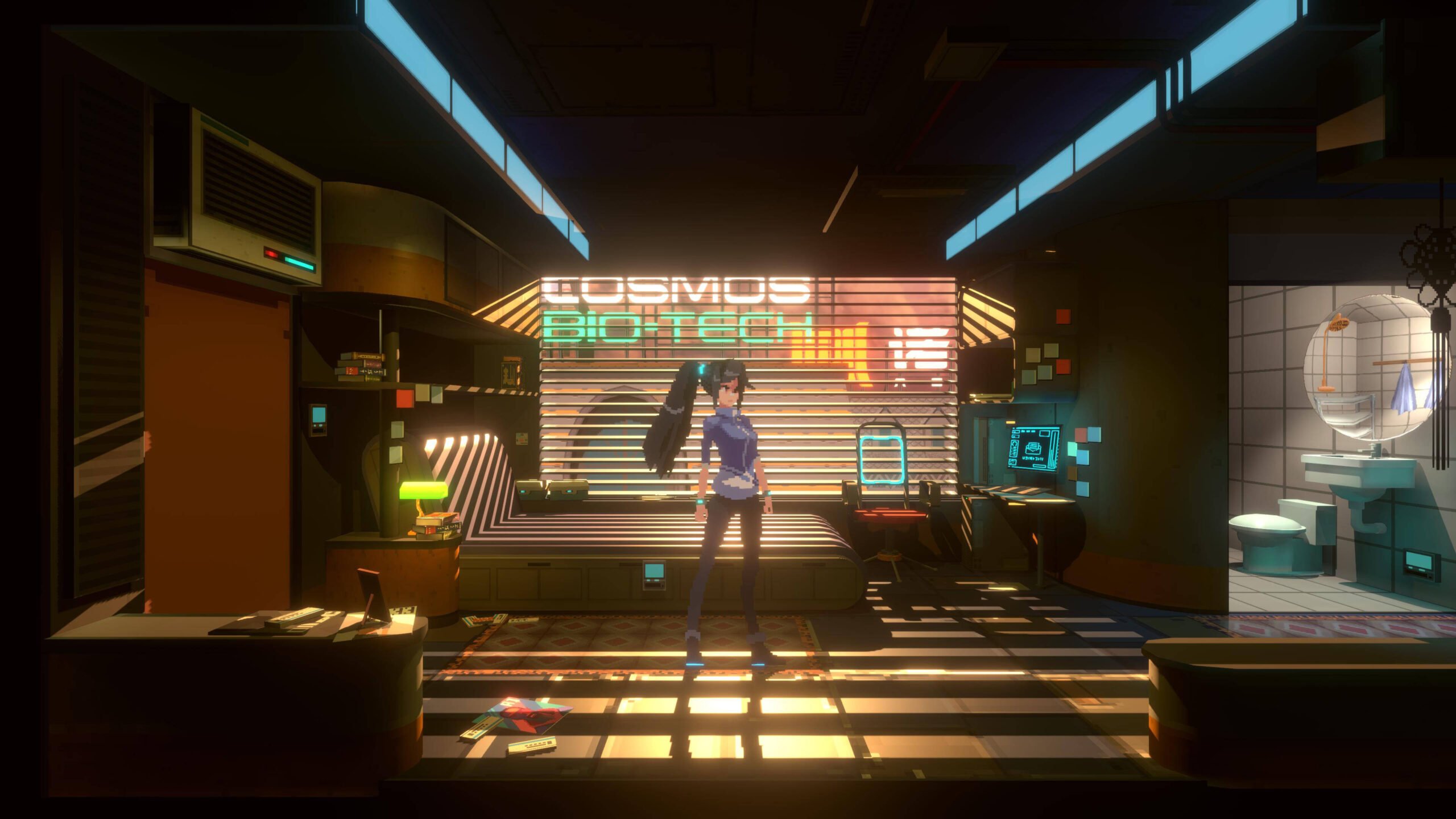 The refrain that any given indie game is “perfect for Switch” is as much of a cliché as it is true. There is always something magical about seeing the most action-packed portion of a game play out on a larger screen, then transitioning to handheld mode for more intimate moments. Fortunately, Anno: Mutationem offers plenty of both: high-energy, bombastic 2D segments contrast with more contemplative exploration sections to provide a futuristic adventure unlike any other. While the port doesn’t entirely escape the hardware pitfalls inherent to a Switch release, Anno: Mutationem delivers where it counts.

Originally released on the PlayStation 4 and 5 in March of this year, Anno: Mutationem bets big that its cyberpunk premise will not feel overdrawn. Players control Ann, a steely mercenary with a mysterious illness that causes her to lose control of her body. She wants to keep her friends and family safe, and so seeks experimental treatments in the hopes of curing the disease that is slowly killing her. Her doctor, one of the sketchiest men around, is confident that his skills combined with her natural affinity for a high-tech combat suit will allow her to find a cure by whatever means necessary. But it’s not all life-and-death drama; the bulk of Anno: Mutationem is concerned with Ann exploring her surroundings, getting a feel for her city, its inhabitants, and the surrounding areas.

As a recent addition to the ever-expanding catalogue of cyberpunk media, Anno: Mutationem may seem as though it treads familiar ground: holographic advertisements take up the sides of skyscrapers in a nod to Ridley Scott’s ever-prescient Blade Runner, and street thugs are obsessed with modifying their bodies via technology to cause greater harm. But there are enough sparks of originality sprinkled throughout the environs of Anno to make the world feel unique and special. The fact that Ann lives in what feels like a tenement house shows that not even futuristic mercenaries are free from the clutches of capitalism.

Ann may feel like a stoic stereotype, but she’s balanced out by the supporting cast and the carefully-crafted world. Her family plays a prominent role in the story, and it’s a delight to visit her sister who tends bar at the local watering hole (yes, even cyborgs, mutants, and androids need a stiff drink now and again). Players are well-advised to read every note, book, and e-reader left conspicuously lying about to gain a better sense of understanding of how this world came to be. The world oozes with detail: at Club Robot, androids grind onstage while shady characters make deals in the booths. Graffiti declares “Punk’s Not Dead!” as law enforcement blocks streets with holographic caution tape. Through it all, players come to understand a world that feels out-of-control, and is only becoming more so.

But as is often the case in the cyberpunk genre, subtlety only goes so far. Society is crumbling, literally, as evidenced by collapsing infrastructure and horrifying monsters running amok in the sewers. Mankind is learning to live with a new plague, a virus that slowly turns humans into a robotic shell of themselves. At every turn, it feels like things are falling apart- but in Anno: Mutationem‘s case, this is hardly a bad thing. Rendered in a gorgeous blend of 2D and 3D, Anno always looks incredible, and when a dystopia looks as appealing as this one does, finding more ways to spend time there is a pleasure.

The 2D spritework is mesmerizing, and even the most tertiary of side characters are bursting with visual personality. Though the animation is often rough, lending NPCs a certain puppetlike stiffness, the player character moves fluidly through the crowded backstreets and dimly-lit alleys in a delightfully appealing way. Ann can even change her clothes, and players who waited for the Switch version can enjoy the sight of her in a cute Joy-con-inspired outfit. Combat is similarly fluid, with Ann able to execute powerful combos to defeat her enemies. In certain extra-intense battles, there is some slowdown onscreen, but for the most part, the Switch handles the chaotic combat of Anno: Mutationem well enough.

Perhaps the only major weak point of Anno: Mutationem is its localization. Misspellings abound, and grammar errors crop up frequently. This is hardly a dealbreaker, but it does undercut the story Anno is trying to tell. The game walks a tonal tightrope as it swings between a dark sci-fi story with real stakes while still fitting in plenty of jokes and fun characterization, and it can be disappointing to be distracted by a misplaced apostrophe or incorrect verb tense.

If players can look past the text, there is plenty to fall in love with here. Anno: Mutationem only grows more intriguing the longer players spend in its world, and the presentation itself truly feels revolutionary. When players seamlessly transition from a 2D hack-and-slash to the more meditative adventure game, they might just realize that Anno: Mutationem is a cyberpunk story worth investing in.