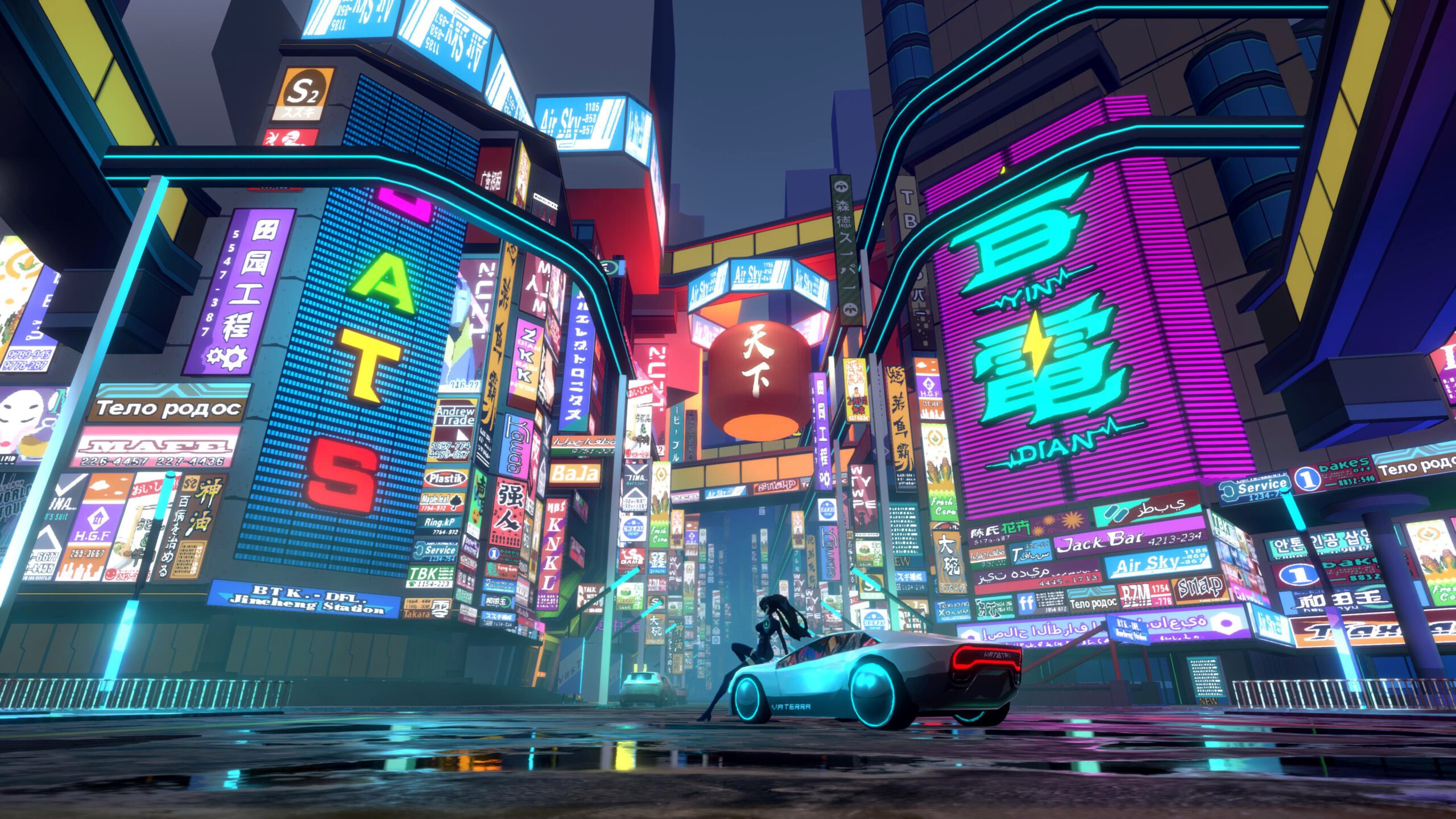 “It’s better to be cold,” reads an anonymous note found in an abandoned hallway about halfway through Anno: Mutationem. “At least that reminds me I’m still human. How should I define myself after evolving?”

The latest title to come from Sony’s China Hero Project initiative, Anno: Mutationem is a narrative-driven cyberpunk action-adventure game that never shies away from asking the biggest questions of its genre: what does it mean to be human? How many robotic body parts and mutated limbs can you take before you become something else entirely?

While countless other titles have pursued these same issues in today’s crowded cyberpunk market, Anno: Mutationem’s remarkably realized world and heart-pounding gameplay let it deliver something unique. Gorgeous to behold, exhilarating to play, and a pleasure to get lost in, this is an experience cyberpunk fans won’t want to miss.

A Rhapsody in Neon

Anno: Mutationem has no qualms immediately throwing the player headfirst into its world of cyborgs, mutants, and far-fetched technology. Players control Ann Flores, a freelancing mercenary who suffers from a mysterious condition causing her to periodically lose control of her body and attack those around her. Her family and friends do their best to hunt down the elusive cure for her disease, but all to no avail. When her brother vanishes while searching for Ann’s medication, she launches a rescue mission that quickly ropes her into a much larger conspiracy–one that involves the fate of the planet itself.

This plot packs as much excitement and intrigue as one would hope for from this kind of game, but there’s no denying the story can feel overwhelming at first: it throws out complicated terms and references to in-universe lore left and right, all with nary a word of explicit explanation. Yet before long, the game gradually immerses the player in its elaborate universe, as environmental clues, conversations, and plot beats naturally dole out vital information about the game’s world, resulting in a clear understanding of Ann’s world without relying on drab exposition dumps. This approach to worldbuilding makes each environment and character Ann encounters—every backstreet neon-drenched bar, abandoned lab, and bustling futuristic cityscape—spring to life with genuine depth.

The campaign withholds just enough information to maintain an air of mystery up until the very end, pushing the player forward to uncover the dark truth behind the disappearance of Ann’s brother. Some characters verge on the one-dimensional and a handful of plot beats—including one particularly bizarre incident involving Santa Claus—can outstay their welcome, but the overall plot keeps the tension high with a steady cadence of revelations and plot twists throughout the quest.

Anno: Mutationem thrives in immersion. With each street corner brimming with holographic popstars, advertisements for alien products, and shady characters from every corner of the galaxy, its fantastical universe feels truly lived in. It also delves into Ann’s own psyche and trauma, resulting in a story that manages to balance its fantastical setting with deeply personal plot beats that question what it even means to be alive. Its massive cast of characters and an ambitious plot filled with memorable set-pieces make the roughly ten-hour adventure memorable from start to finish.

The first hour of Anno: Mutationem feels like a devious bait-and-switch. As Ann wanders around her neighborhood, checks her email, and completes a few routine errands in full 3D, the game feels more like an exploratory slice-of-life experience. Yet the gloves come off as Ann encounters her first obstacles when searching for her brother. The game then shifts to a fast-paced 2D action platformer with an in-depth combat system reliant on powerful combos and split-second reflexes.

This combat system starts out simple enough, with the choice to alternate between light, heavy, and long-range attacks. An expansive skill tree soon introduces a plethora of combos and abilities to master, allowing your playstyle to rapidly expand and develop throughout the campaign. A versatile arsenal of customizable weapons lends yet another way for players to tweak the battle experience according to their own strategies. By the game’s final act, what began as a basic button-mashing combat system becomes a balletic display of lightning-fast action. It’s certainly a rewarding adventure that challenges each player’s skills without ever feeling unfair. The action sections strike a difficulty balance that feels just right, barring a handful of late-game bullet-sponging bosses.

Anno: Mutationem alternates between these 3D exploration segments and 2D action-platforming scenarios fairly consistently throughout the campaign, resulting in an immaculately balanced gameplay loop. No one style feels like it overstays its welcome: just when you feel you’ve delved into every corner of a new city, you’re drawn into a new dungeon stuffed with foes to face. Likewise, after an hour of smashing mutant or robotic faces in, it becomes a welcome reprieve to comb through a cityscape completing side objectives.

The gameplay loop is surprisingly robust, with an ample offering of side quests and minigames–including a bartending activity that has no right to be as good as it is–that break up the flow and ensure that no single part of the campaign ever wears thin. Most importantly, the pacing itself allows players to focus on the high-stakes action of the main campaign while allowing periodic breaks to explore, complete side quests around town, and mix a few drinks, giving you the freedom to do as you see fit without ever overburdening you with too many objectives at once.

A true audio-visual stunner, Anno: Mutationem wraps its excellent gameplay in an even more remarkable presentation. With a high-resolution pixelated art style reminiscent of HD-2D games like Octopath Traveler or Triangle Strategy, Anno: Mutationem overflows with color, personality, and style. While the fixed camera angle can sometimes make it difficult to see certain parts of the environment–for example, it can be difficult to see items and objects that are tucked away in the corner of a room, where they may be obscured by environmental elements in front of the camera–it also ensures that each scene has a cinematic flair, with the camera dynamically zooming in and out following Ann’s every move.

From an audio perspective, the game does suffer one bizarre issue in its English voice acting. While the localization is generally solid (barring a handful of minor typos), there is often a disconnect between what the text on the screen says and what the voice actors say. For example, a dialogue box may read, “I’m going to leave now,” while the voice actor may exclaim, “I’m getting the hell out of here!” These incongruencies are relatively minor (and there is a chance that they could be patched out in a post-release update) but can make certain scenes feel disorienting, where you hear one thing but read another on the subtitles.

Wildly ambitious in its gameplay and plot, Anno: Mutationem manages to make good on its aspirations with an engaging narrative, an immersive dystopian world, and an addictively balanced gameplay loop. It suffers only a handful of setbacks in its characters and presentation, with the overall experience staying consistently thrilling through its expansive campaign. No matter whether you install a cybernetic arm or mutate a new limb altogether, one thing remains true: Anno Mutationem stands as one of the best cyberpunk games in recent memory.