Best Wii U Games Part One

Though the Wii U never achieved the popularity Nintendo had hoped for in the successor to one of the best-selling consoles of all time, those few who gave this quirky console and its touchscreen gamepad controller a chance were rewarded with some of the best and most unique games of the generation. While quantity was always a problem, quality rarely was, from first-party offerings that often were the pinnacle of their respective franchises, to the incredible creativity displayed by indie developers in exploring new ways to play games.

History will likely look back fondly upon Nintendo’s charming but flawed experiment, as when it comes to actual gaming, the system was home to some truly fantastic experiences. To that end the staff here at Goomba Stomp has voted on and compiled a list of the 25 Best Wii U Games. Enjoy!

While most developers, including Nintendo itself, struggled to capitalize on the potential of the gamepad to create unique gaming experiences, a small company based in Denmark managed to make it look easy. Knapnok Games’ collaboration with Nicklas Nygren (better known as Nifflas) produced not only one of the Wii U’s best games in Affordable Space Adventures, but one that it’s hard to imagine would be as enjoyable played on anything else. Taking control of a recently wrecked spacecraft after an intergalactic tourism incident gone horribly wrong, players must navigate an alien world by solving physics-based puzzles, all while avoiding the dangerous denizens awakened by the intrusion. The trick to surviving is the proper management of the ship’s various systems, from the engines and anti-gravity to a small searchlight and scanner. These contraptions all emit different levels of noise, heat, and electricity, elements that alert the mechanized threats to the ship’s location, the result of which usually equals fiery destruction.

The gamepad becomes the onboard computer at the helm, slowly booting up new functions as they come online and controllable via the touchscreen. Juggling these systems to preserve functionality while decreasing the desired output enough to slip by sentries undetected is where the challenge comes in, as everything happens in real time, and adjustments must be made on the fly. It’s both intuitive and immersive, making players feel like they’ve actually got their hands on the vehicle’s interface, with little details, like a cracked screen occasionally glitching, sci-fi bleeps and bloops emanating from the gamepad speakers, and ever-changing meters only adding to the ambiance. This free-flowing scheme would be difficult to implement elsewhere without necessitating pauses, or inserting a UI that intrudes so heavily into the beautiful otherworldly imagery up on the TV screen that the illusion would be shattered, and Affordable Space Adventures casts an absorbing spell. The mystery behind both the planet and the shady, yet cheerfully optimistic, travel agency responsible for the game’s events is entertaining satire concisely told, culminating in one of the most inventive uses for the Miiverse yet. It’s a mesmerizing trip from start to finish, made possible by clever puzzles, an engrossing design, and unique controls only found on the Wii U. (Patrick Murphy) 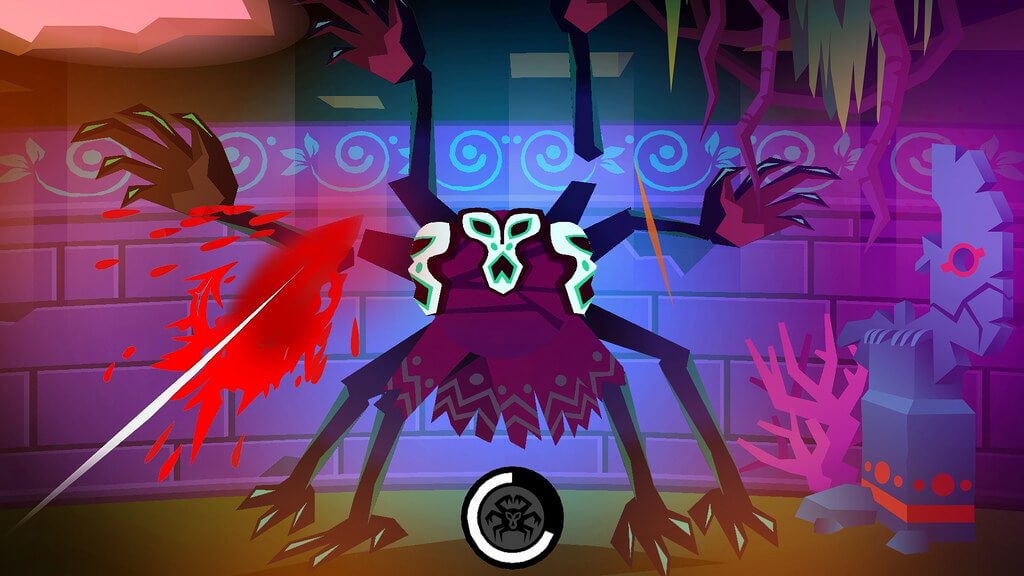 True to its name, numerous body parts will be separated and strewn across the stark, ancient netherworld of Drinkbox Studios’ Severed, but despite the vicious sword slashing at the heart of the gameplay, it’s the Zelda-like dungeons and haunting atmosphere that lingers long after playing. The Mexican/Central American-inspired visuals stand out stunningly, like a pastel pop-up storybook, and the somber tones of a young woman seeking both rescue and revenge offer a distinct vibe that is never less than absorbing. The story is told mostly through imagery instead of exposition, playing out more like a beautiful nightmare than a straight narrative, and this open-ended, mysterious method is quite effective. Exploring the sadly colorful world, full of dense woods and cavernous ruins, covered in symbols and grotesque monsters, the hero slowly learns her place in this tale, but interpreting for oneself the meaning of the events that unfold is what makes Severed‘s story truly engaging.

That and the limb-detaching hacking and slashing, of course. Swiping the stylus across the gamepad touchscreen simulates a sword swing, with both direction and length being significant factors. Short bursts can produce a series of small lacerations, while longer strokes create deep gashes that deliver more damage, and with many enemies quick to cover up, finding the right angle from which to attack is imperative for victory. As the game progresses, battles start to involve multiple enemies, many of which apply buffs to strengthen themselves, and encounters can often seem like juggling acts, pivoting from monster to monster, chipping away at their health while protecting your own. It’s a satisfying system and one that recalls certain strategic combat elements of Skyward Sword. The reward of precision cutting is an array of arms, legs, eyeballs, and other organs that can be used to forge upgrades, turning a former peasant into a badass warrior ready take on a world of death by causing some herself. Meticulous dungeon design and some nice secrets to uncover accompany the blood-soaked punctuation of conflict, ensuring that journey taken in Severed remains mesmerizing. (Patrick Murphy) 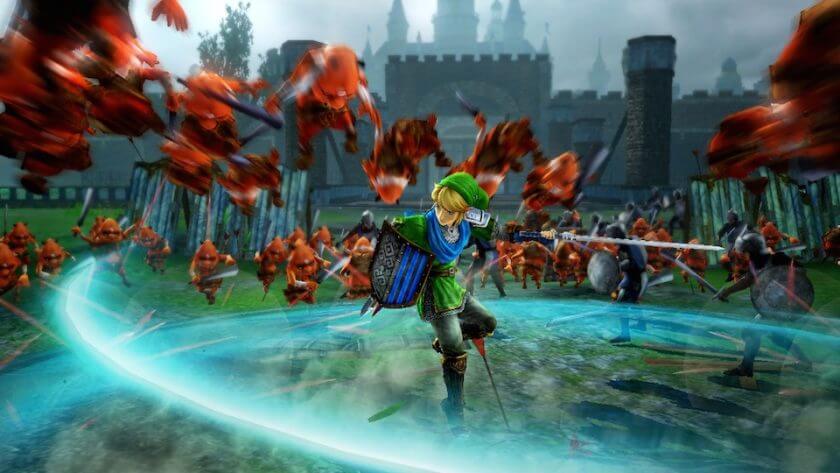 The fact that Hyrule Warriors is able to exist on its own represents one of the many great things about the Wii U. No other console gives players the chance to experience one of the greatest video game franchises of all time adapted into a Dynasty Warriors-style action game, and this is part of what makes Hyrule Warriors such an engaging and exciting experience.

While it does feel less polished than it should be, the game still packs the perfect amount of nostalgia, tight combat, and replayability. Players get the chance to battle hordes of enemies as some of the most memorable characters from the Legend of Zelda series, such as Link, Zelda, Sheik, and Midna. Each of these characters offers a different play style and signature moves. Battles are fought across iconic areas such as Hyrule Field, Death Mountain, and Skyloft. Along with the copious amounts of content stored in the main game, players can also play through Adventure mode. Modeling itself after the original Legend of Zelda overworld, players run through various areas and try to complete tasks or kill enemies. With victory comes new characters, items, and gear. While this mode is optional, it does make the base game much more exciting and fun. Amiibo support for Hyrule Warriors is also fairly strong, with game-centric figures offering stronger weapons and items, while amiibos from other games give the player some of the lower-tier weapons and items.

The only real weak point for Hyrule Warriors is its story. The entire endeavor feels a bit rushed and hollow, but given the style of the game, this makes sense. It’s always been a challenge to tell and engaging story in a Dynasty Warriors-style game, mainly due to the fact the majority of the gameplay revolves around constant combat.

The bottom line is that Hyrule Warriors was designed to appeal to fans of core Zelda series. While someone completely new to the series could still have fun with the game, a majority of the subtle references and nuances would be lost on them. This does not delude the fact that Hyrule Warriors represents one of the most enjoyable and exciting gaming experiences players can have on the Wii U, hands down. (Carston Carasella) 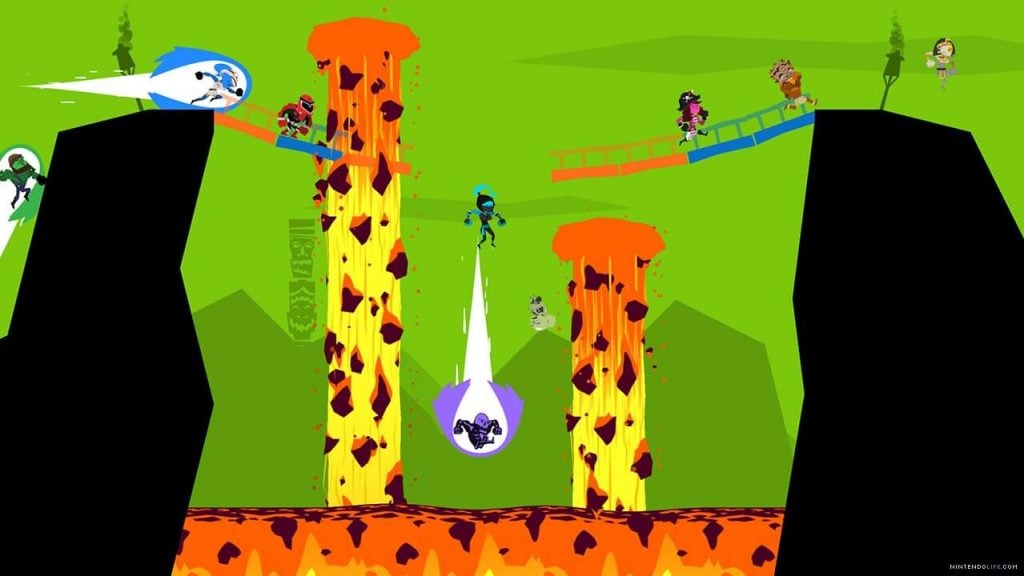 Enter Runbow, the debut title from Toronto-based developer 13AM Games. Runbow is a fast-paced action party game with a novel gameplay mechanic that can be enjoyed solo or with up-to nine friends who race against each other as platforms and obstacles appear and disappear when the background changes colors. For a small indie game, this platformer is jam-packed with content both competitive and cooperative — a fabulous soundtrack, striking visuals — and plenty of unlockable characters, which include the titular character from Shovel Knight, Rusty from SteamWorld Dig, and Max from Mutant Mudds. Runbow is, simply put, the best local multiplayer experience on Wii U this side of Smash Bros., but it’s also a difficult platformer that will keep you busy for hours on end. (Ricky D)

Lego games are primarily known for their family-friendly takes on popular licensed properties, coupled with simple but fun couch co-op, but the Wii U’s Lego City Undercover tosses both those crutches aside, deciding to stand on its own two blocky feet with an original story and single-player focus, in the process delivering possibly the most clever, well-rounded, and engaging entry in the brick-smashing series yet. The open-world adventure following a charming dope of a renegade cop in his pursuit of truth and justice (and the girlfriend that got away) takes place in the spectacularly-imagined Lego City, a bustling metropolis portrayed as an amalgamation of some of the most recognizable cities in America and elsewhere, with sections that draw from New York and Miami, San Francisco, and even Venice. This place feels just as magical as any Star Wars or Marvel setting, yet it’s completely new, a cornucopia of surprises both great and small. From off-roading in Blue Bell National Park to parkour-ing through the back alleys of the Chinatown-like Pagoda district, exploring nooks and crannies while smashing everything in sight in the search for both collectibles and Easter eggs is a joy. The city feels alive, with pedestrians leaping out of the way of recklessly speeding police chases, or simply musing about their lives while waiting for the airport bus. The writers show that they can handle comedy without always falling back on references, but movie buffs will, of course, spot a boatload of in-jokes, from characters inspired by Dirty Harry and The Shawshank Redemption to a construction foreman that speaks almost solely in Arnold Schwarzenegger puns.

The writing is often sharp and quite witty, peppering the player with so many jokes that those falling flat are quickly forgotten, and this approach is taken with the gameplay as well. Though many of the actions in Lego games get repetitive over time, Lego City Undercover mixes things up quite well, with a good-guy GTA-inspired overworld allowing for G-rated vehicle “commandeering,” gang arrests in sunny playground parks, and terrorizing the populace on pigback. The main story missions combine light puzzle solving with a combat system that resembles a watered-down version of counter-based moves of games like Arkham City (so more than just mindless button-pushing is required), and some acrobatic platforming is thrown in for good measure. Nothing ever gets complicated, but it’s never boring either, and the goofy objectives are often gleeful highlights of an superbly madcap world. Add in some great uses for the gamepad that seem more organic than most, and Lego City Undercover feels like it belongs on the Wii U, a uniquely entertaining game for a uniquely entertaining console. (Patrick Murphy)