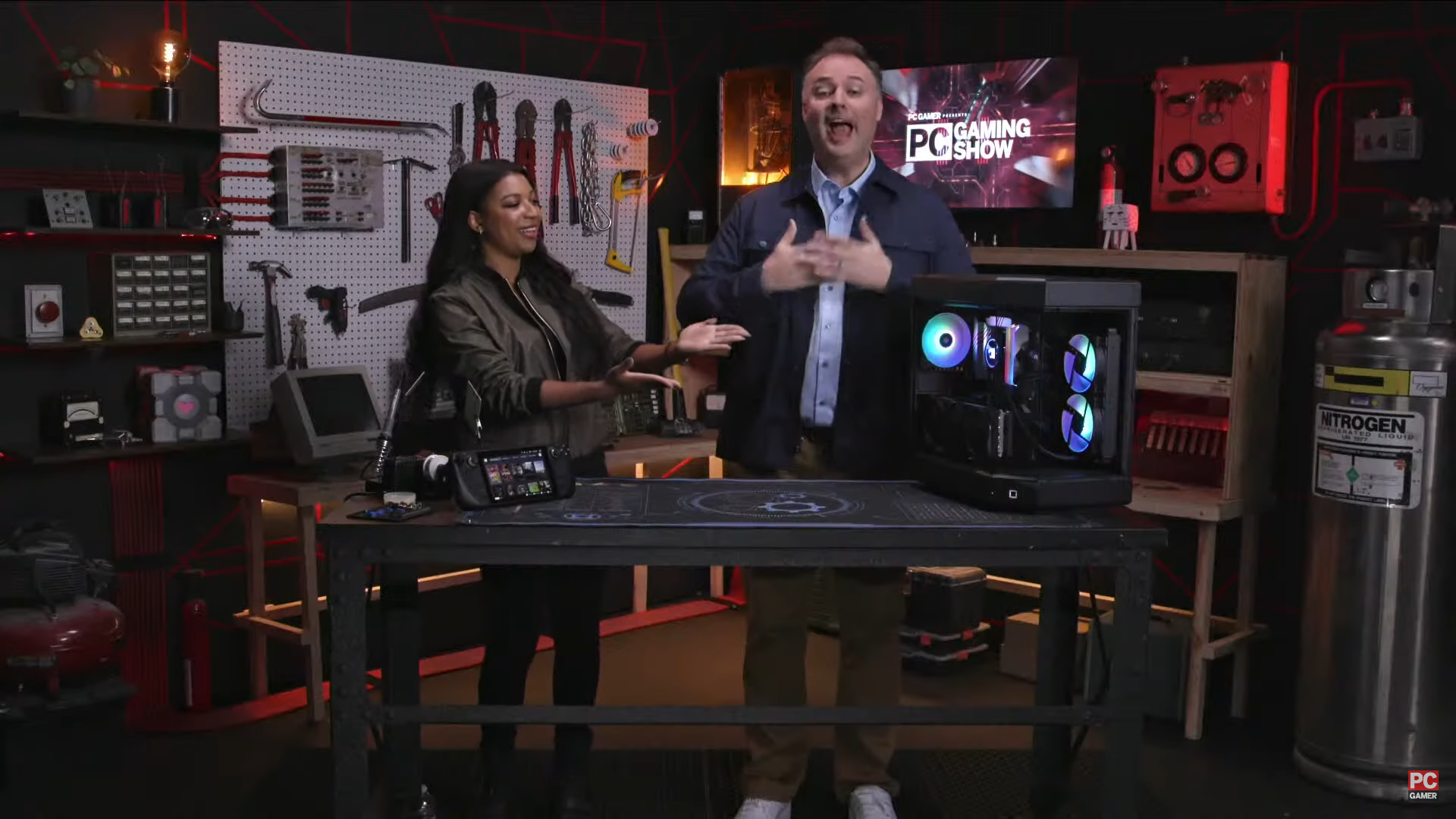 The PC Gaming Show 2022 certainly followed the traditions of its predecessors, delivering two hours’ worth of awkward cringe-worthy humour and more importantly plenty of interesting and exciting game reveals. Unlike the main Summer Game Fest event, there were a considerable variety of genres on display here, making for an overall more interesting showcase. Here are ten of the most exciting announcements at the PC Gaming Show 2022!

From the makers of Don’t Starve, Klei Entertainment’s Rotwood is a 1-4 player co-op hack-and-slash dungeon crawler which is reminiscent of games like Castle Crashers in all the right ways. The game’s Steam page invites players to “battle corrupted beasts, gather what remains, and forge a safe haven with your friends”, and promises a rogue-like structure. Rotwood will release in early access at an undisclosed date, so keep this one on your radar for the forseeable future!

This intense multiplayer spy game from Sweet Bandits Studios was certainly a highlight of the PC Gaming Show 2022, showcasing its fun colourful art style and in-depth stealth mechanics that allow players to deceive their friends in style! Disguise yourself or utilise a variety of high-tech gadgets and weapons to gain the advantage and extract with the objective. Deceive Inc. will arrive in early 2023 and can be wishlisted on Steam now!

The new game from the developers of fantastic indie hits This War of Mine and Frostpunk is titled The Alters, and we were treated to a beautiful trailer that, while not showing any gameplay, told us a lot about its world. The protagonist wakes up on a mysterious wheel transport and discovers numerous alternate versions of himself that represent the diffeent life paths he could have taken, in a game that promises to explore the “what ifs” of life. The Alters can be wishlisted on Steam right now, and currently has no release date.

Potion Craft: Alchemist Simulator is an early access alchemy game that you can buy on Steam right now, but a new trailer at the PC Gaming Show 2022 revealed that the game is leaving early access in September 2022! Featuring a beautiful medieval art style and fun engaging alchemical gameplay, Potion Craft currently has Very Positive reviews on Steam and promises new content when the game leaves early access, making this a must-have for fans of crafting systems and historical settings.

Described as a fully-fledged remake of the 1994 cult classic of the same name, System Shock finally gets more information and a new trailer showcasing its sci-fi world and methodical gameplay. According to the game’s Steam page, System Shock is built from the ground up with new sounds and music, but brings back the original voice actor for the game’s iconic villain SHODAN. For fans of this indsutry-defining video game, be sure to wishlist the System Shock remake on Steam to keep up with the game’s development.

By far the most disturbing game shown at the PC Gaming Show 2022, Scorn is a bio-horror survival game with a gruesome aesthetic that boasts having no dialogue, no pre-rendered cutscenes, and a heavy emphasis on environmental storytelling. Designed specifically to immerse the player in a gritty, dank industrial world fallen into ruin, Scorn promises to limit hand-holding and allow players to discover its secrets naturally through exploration. Releasing on October 21st 2022, Scorn is certainly a horror game worth keeping an eye on, and can be wishlisted on Steam right now!

Heavily inspired by 90’s shooters like the iconic GoldenEye 007, Agent 64: Spies Never Die is an upcoming retro FPS with a variety of story missions that let players accomplish objectives ranging from hacking to saving hostages and more. Its art style is lovingly crafted to mimic 90’s FPS games and is clearly a passion project that respects the games which have influenced its development. You can wishlist Agent 64: Spies Never Die on Steam now to be notified when a release date is announced!

Also shown off at the main Summer Game Fest event, Stormgate is the debut RTS game from developer Frost Giant Studios, a studio comprised of veteran strategy game developers. Set in a post-apocalyptic fantasy sci-fi world with mysterious demonic alien invaders, Stormgate will feature ongoing campaign missions, esports opportunities, and free-to-play mechanics that the developers have assured will not lead to pay-to-win scenarios. Also revealed at the PC Gaming Show 2022 was confirmation of a co-op campaign mode and high-skill 1v1 competitive modes alongside modding support. Stormgate will recieve a beta in 2023 and can be wishlisted on Steam.

Fans of city-builders with exciting twists will be pleased to see the reveal of Laysara: Summit Kingdom, a mountainous strategy game where players try to create and sustain a kingdom facing constant threats of avalanches and weather-based dangers. This is the debut game from developer Quite OK Games and looks very impressive with this in mind, and with a release date set for Q1 2023 it seems that players won’t have to wait too long to see more of the game. Laysara: Summit Kingdom can be wishlisted on Steam now!

Last but not least, we got an exciting trailer for a high-quality mod for VR hit Half-Life Alyx, titled Levitation. Set in an original world in the Half-Life universe, Levitation is a 4-5 hour campaign built by a talented team of modders, with footage from the trailer showing engaging action and stealth gameplay as the player hides from a dangerous enemy in a semi-open level. This impressive mod is set to launch on the Steam Workshop in Q3 2022, and the new gameplay trailer can be seen here on YouTube. Levitation will be free for owners of Half-Life Alyx, so make sure to download and play it later this year!

That’s all from the PC Gaming Show 2022! Check out the full event below to see all of these exciting reveals and more, hosted by Sean “Day9” Plott and Mica Burton and featuring multiple interesting interviews with developers to dive deeper into their games.