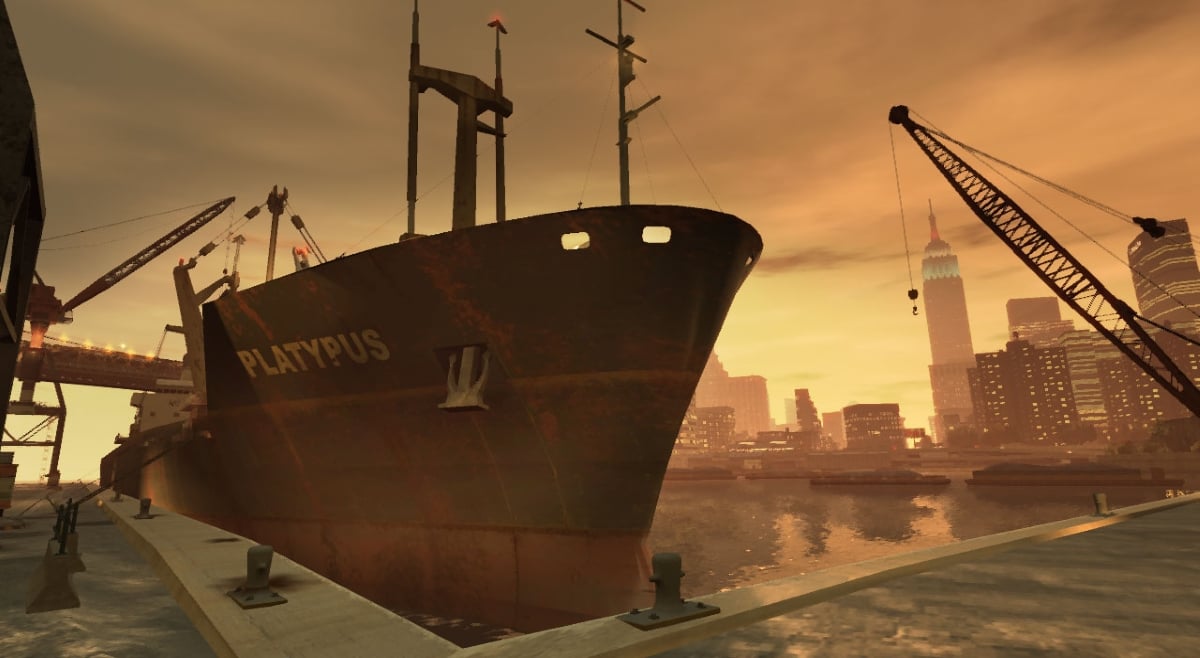 Great Moments in Gaming is a column wherein we look back at some of the great gaming moments that have made a significant impact on our view of this medium and how we have come to understand it. This time around we’re taking a look back at the eye-opening first mission of Grand Theft Auto IV.

Grand Theft Auto IV is all about new horizons. It’s a new world for Niko Bellic, and a new world for the player, too. A migration to a new land and, with it, a new era of console gaming. Grand Theft Auto IV released over one year into the Xbox 360 and PS3’s reign, but due to the mega-detailed environment and scope of the narrative, it has a fair claim to be one of the top titles on those platforms and of that generation. And that’s epitomized in the great gaming moment that is the first mission, ‘The Cousins Bellic’.

Following a cutscene with too many crude jokes and swear words, Niko is tasked with getting behind the wheel of a clunky, not-so-good Eastern European car and following a waypoint to Roman’s place. Unfortunately for Niko, Roman’s ‘mansion’ turns out to be a grotty little apartment with too much beer and too many posters of nearly-naked women, finding himself in a life situation that can’t be a big improvement on what he’d had back home (hello, American Dream …). Of course, any casual Grand Theft Auto player (pretty much everyone, then) only goes for the objective once they’re done messing around for a good half hour.

In this case, that amounts to taking in the nocturnal sights by idly driving the quiet, near-deserted streets in the dead of night. There, we get our first glimpse of a much larger world – a world that’s beckoning and ready to be explored. Passing the streetlamps and the lit-up neon signs of the various establishments, or perhaps a garbage truck busy doing its late night rounds, it’s impossible to shake off the feeling of stepping into a real metropolis that never sleeps. Of being a small drop in a large pond. Players will even earn an achievement (or trophy, if on the PS3) called ‘Off The Boat’ which, because it entails booting up the single-player, has to go down as one of the cheapest ones out there.

It’s even better that this great moment in gaming takes place at night when Liberty City is not yet fully awake, not yet revealed in its whole glory. The car’s headlights can only illuminate the outer layer of that city, leaving excitement at the prospect of what the daylight might bring. (Usually player-induced chaos and a lot of dead cops.) There’s even the chance of passing a parked or moving police car – the promise of havoc and mayhem to come. Yet players may still be reveling too much in the wow factor and lacking the confidence to initiate a chase at this early stage. It’s almost like Rockstar’s way of goading the player on, of gently easing them in to this great new world where the sky’s the limit. And the invisible walls at the map’s horizontal edges …

Of course, Niko goes on to become a much bigger fish in that same world, building an empire of sorts across the city. Yet, counter-intuitively, the power gained doesn’t quite compare to the prospect of gaining it, or to that initial feeling of wonder when the player first sets off on that long crime-ridden journey by getting off the boat in that rickety, banged-up old car of Roman’s. Again, as any casual Grand Theft Auto player will tell you, it’s sometimes more about the journey than the destination. More about going for a ride than actually completing the mission objective.

And as all this goes on, the radio will be sounding away in the background. Accompanied by Roman’s drunken chatter, of course. There’s a motley assortment of stations, most of them catering to a specific cultural community or ethnic group within Liberty City. There’s Radio Broker, Liberty Rock Radio or, even better, Vladivostok FM, the ‘home’ station of Niko and Roman. It all adds to the multi-faceted ‘melting pot’ feel of Liberty City.

And for gamers whose last experience of Grand Theft Auto up till this point was Grand Theft Auto: Vice City Stories or Grand Theft Auto: San Andreas (defectively brought back to life in the remastered trilogy) it’s all rather incredible. In one way, this first mission shows that it’s the exact same as those earlier titles; the same ‘reach a destination’ mission objectives and the same freedom to just go exploring. Except now in HD and stunning graphics.

Partly because the magic eventually fades, and partly because familiarity breeds contempt, nothing which comes after in Grand Theft Auto IV lives up to that great moment in gaming of first getting off the boat. Not even the random killing sprees or the insane five-star wanted level car chases. Nothing beats the feeling of stepping into a larger world, like with Columbus when he first landed in the vast Americas, or Hernan Cortes and his men when they got their first sight of the rich, jewel-filled Aztec Empire. Nothing beats the moment of first discovery.