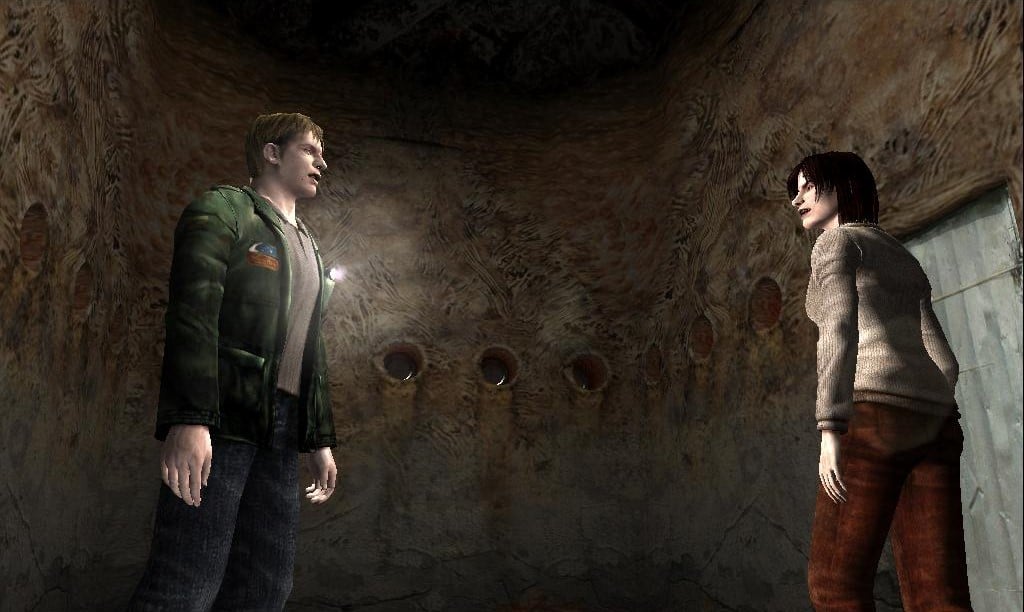 Looking Back at the Most Devastating Moment of Silent Hill 2

Great Moments in Gaming is a column wherein we look back at some of the great gaming moments that have made a significant impact on our view of this medium and how we have come to understand it. Today, we’re looking back at a tense, troubling stand-off between James and Angela in Silent Hill 2.

The Silent Hill series has long been known for its disturbing imagery and psychological knack for terrorizing us with our own worst imaginings. However, it is also known for the many tortured souls which are drawn to the titular town, and how it forces them to pay for their sins.

This is the impetus behind Silent Hill 2. James Sunderland murdered his sick wife. Angela Orosco murdered her abusive father. Both escaped justice, and it is for this reason that the town of Silent Hill calls to them. As James, you meet the troubled Angela several times over the course of your journey, and each time she seems to have descended further into her own personal abyss.

After James finds out the truth about the town, and why he was forced to return there, he meets the suicidal Angela one final time. Suddenly, apropos of nothing, James opens a door in the Lakeview Hotel and goes from a dusty, dilapidated haze to a sudden roar of flames and smoke. 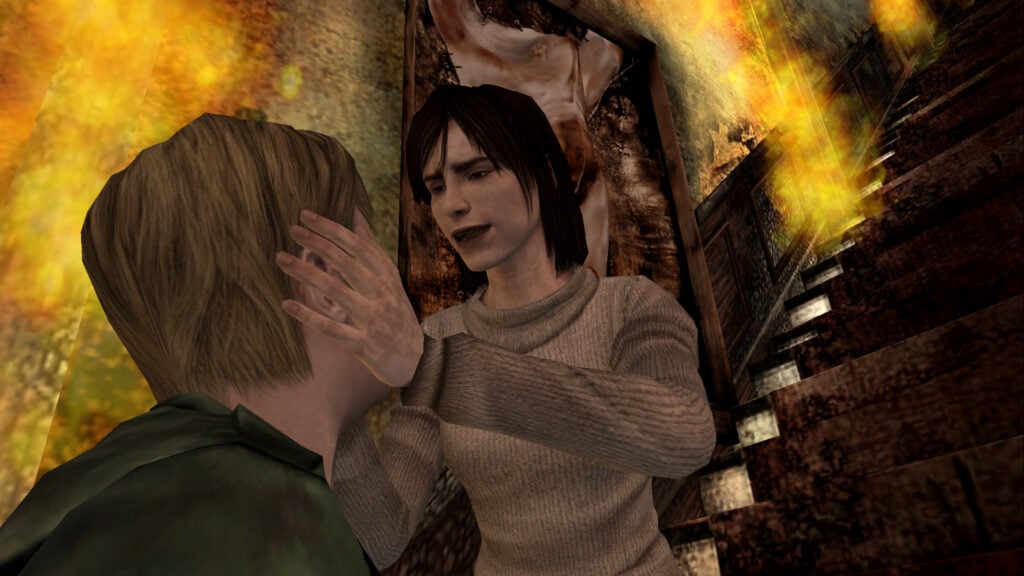 There he sees Angela again. She seems to have resigned herself at last to carry out her suicide, and while James tries to talk her out of it, he soon grows resigned to let her go as well. Broken and disillusioned by the revelations he has been forced to accept about himself, and his own selfish nature, he lacks the strength to talk her down this time.

“It’s hot as hell in here,” he says at last, having nothing left to offer. To this Angela drops the most troubling line in all of Silent Hill 2. “You see it too? For me, it’s always like this.” The revelation that this is how Silent Hill has looked to Angela all this time, as opposed to the empty, foggy town you’ve been seeing, is a jaw dropper in its own right, but the connotations beneath the line are what really dig their fingernails into your psyche.

As a survivor of years of sexual abuse from her father, Angela has suffered for so long that she’s barely able to hold on to her sanity. With the murder of her father still weighing on her, the blame of her mother still tormenting her and the town of Silent Hill forcing her to face her trauma and her sins head on, Angela’s version of hell is truly a horrific place. The above line refers to how she, as a survivor of sexual abuse and trauma, is forced to live in her devastating reality all the time. Even as those around her walk in and out of her private hell, she is unable to leave it.

This is the moment in Silent Hill 2 when she is finally giving up, giving in and letting go of this horrible life. As she walks off into the flames, James is forced to watch, knowing he lacks the courage and compassion to save her. James isn’t even sure he can save himself anymore. And so he watches, as Angela climbs the stairs to her demise, disappearing forever into the flames that have threatened to consume her for so long.

It’s a devastating scene, and maybe the most emotionally evocative moment of the whole franchise. Set to the heart-wrenching “Theme of Laura“, James and Angela’s final meeting is about giving in to our worst impulses, and the tragic inability to save someone from themselves. Silent Hill has always been about this sort of thing. Tormented fathers, grieving mothers, impetuous daughters, and sinful sons. However, no creature in the series storied past has been as damned or as tortured as Angela Orosco of Silent Hill 2, and as James watches her walk into those flames, we are left with a feeling so raw and empty that the smoke begins to fill our hearts as well.

All these years later, I can still see those flames and smell that smoke. I’ve never forgotten Silent Hill 2’s Angela, and like Aerith Gainsborough in Final Fantasy VII and Sarah Miller in The Last of Us, she lives on even in her death, filling players with horrible regret and transcendent sorrow for the girl we just couldn’t save, no matter how hard we tried.