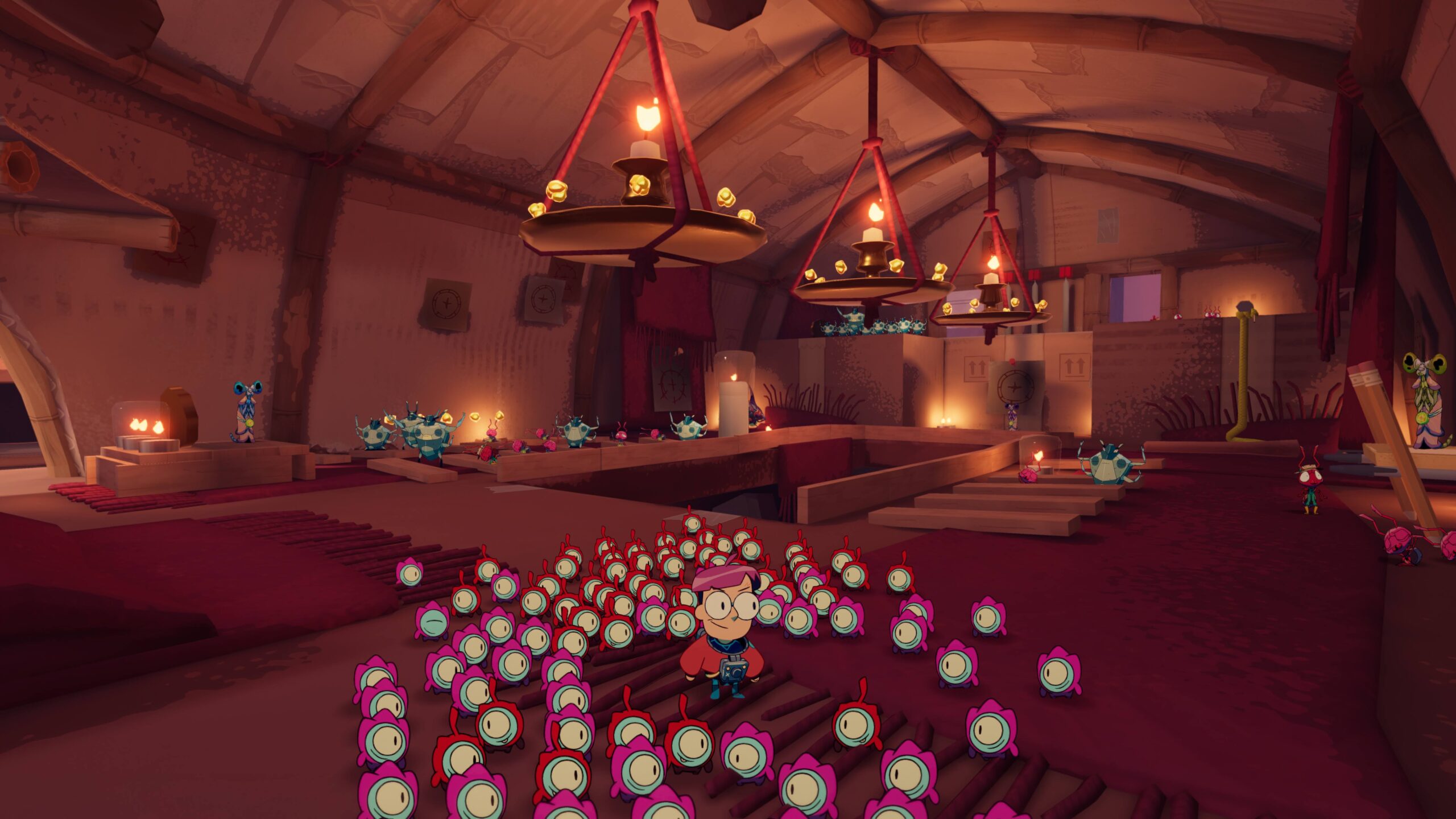 One of the most satisfying reveals during a recent Nintendo Direct was confirmation that Nintendo remembered one of their more innovative franchises, Pikmin, still exists. But as excited as Shigeru Miyamoto was to discuss the prospects of Pikmin Bloom, Pikmin 4 was certainly the more substantial announcement. However, with a vague 2023 release date, fans of the miniature multicolor plant people will have to find something else with which to occupy their time. Tinykin, the recent release from the ex-Ubisoft developers of Splashteam, shares some of Pikmin’s DNA while offering enough new and different mechanics to emerge as its own game. For players who love being a tiny little guy who bosses other, tinier little guys around, Tinykin will scratch a very specific itch.

An enduring trope in fiction is “person finds themselves in an unfamiliar world and must learn to navigate through it”. Most video games find themselves here, where the player uses gameplay mechanics to better understand their surroundings. Tinykin explores a subgenre of this trope: that of the shrunken-down explorer. Milo, an intrepid member of a spacefaring race, is convinced that his planet is not his true home. After an accident causes his vessel to crash, Milo awakens in a normal suburban house, with a catch: he’s only a few inches tall. With the help of local insects and mysterious creatures called Tinykin, Milo must solve the mystery of his surroundings and try to make it back home.

Comparisons to the Pikmin series are perhaps inevitable, but Tinykin is distinct. Tinykin is less of a real-time strategy game and more of a 3D platforming collect-a-thon. Every new area of the house, from the kitchen to the hallway to the bathroom, is packed with collectibles and secrets that makes exploring them a joy. Milo’s got moves, and with the addition of the Tinykin themselves, has no trouble climbing into every nook, cranny, and bookshelf he comes across.

The Tinykin themselves bring tons of charm to any interaction. In nearly every area, Milo encounters a new variety of Tinykin, introduced in an adorable animated cutscene. Each color-coded creature has a special ability: purple Tinykin are super strong and can carry items across a map, while red Tinykin are useful for exploding obstacles and breaking down barriers. There are superconductive blue Tinykin, great for daisy-chaining their way from a sparking wall outlet to an unpowered electrical device to get them working again. Green Tinykin stack on top of each other, allowing Milo to climb the world’s cutest ladder. Lastly, yellow Tinykin can form bridges if they’re tossed in just the right spot. These eyeball-shaped creatures are the heart of Tinykin.

Gathering Tinykin is simple. Players simply walk over colored eggs, which hatch new Tinykin who then will follow Milo unquestioningly. The mystery of why Tinykin are so devoted to Milo spools out satisfyingly over the course of Tinykin‘s six main levels. Each level, which takes place in a new part of the house, has a unique conflict that only Milo can resolve, usually by bringing a certain number of items to a specific NPC with the help of his small companions. But though objectives are not very mechanically complex, movement and exploration is always entertaining. Tinykin succeeds by blending charming art direction with fun, streamlined gameplay.

Art direction in Tinykin is wonderfully specific, especially if the player is a fan of Honey, I Shrunk the Kids or spot-the-object books like I Spy. The house itself is rendered in gorgeous, chunky 3D, and while the world is not as meticulously detailed as something like It Takes Two, it is still a thrill to see mundane, everyday locations through the eyes of someone very, very small. Milo and every NPC exist as 2D animated characters, like paper cutouts in the three-dimensional world. The effect works and makes Tinykin feel unique in terms of presentation. Every stage is home to dozens of insect NPCs, who have taken over the house in the wake of an owner’s absence.

The house seems to be stuck in the 90s, as stacks of VHS tapes and cassettes are carelessly piled up in the corners of rooms. But the insects of the residence have not been idle; instead, they’ve created an entire society that Milo must navigate. In one memorable sequence, Milo must make peace between the party-hardy silverfish and the neighboring dung beetles who just want a night’s rest. Another stage places Milo at the heart of a labor revolution, as working bugs revolt against a ruling class who hoard food for themselves. The vibe is generally upbeat, though the final area’s emotional gut punch may feel somewhat out of place.

There are dozens of pop culture references sprinkled throughout Tinykin. From the first NPC who rouses Milo with a “Hey, you! You’re finally awake!” to an ant named Spokk who encourages the player to “Live long and prosper”, there are jokes and sly nods to films, books, and video games all over the game. Mileage may vary, but there really is something to make anyone laugh if they take the time to seek out every side bug.

Puzzles themselves are rarely more complicated than “have enough Tinykin in tow to throw at a given problem”, but this is hardly a negative. Stages become playgrounds for Milo to zip around and find Tinykin needed to complete tasks. In every stage, there are optional objectives, like finding enough nectar for the ant brewer Sikaru, or helping museum curator Prattle fill up their gallery with hard-to-find artifacts. Tinykin feels enjoyable to simply explore, thanks to the developer’s keen understanding of pacing and movement speed. Milo has a soap board that lets him skim over surfaces quickly, especially if heading downhill, and there are plenty of ropes and spider-silk ziplines to traverse that make every level easily navigable.

Tinykin never overstays its welcome, and its focused approach to objectives mean that players always know what they’re working towards. Though short, Tinykin is fully satisfying.