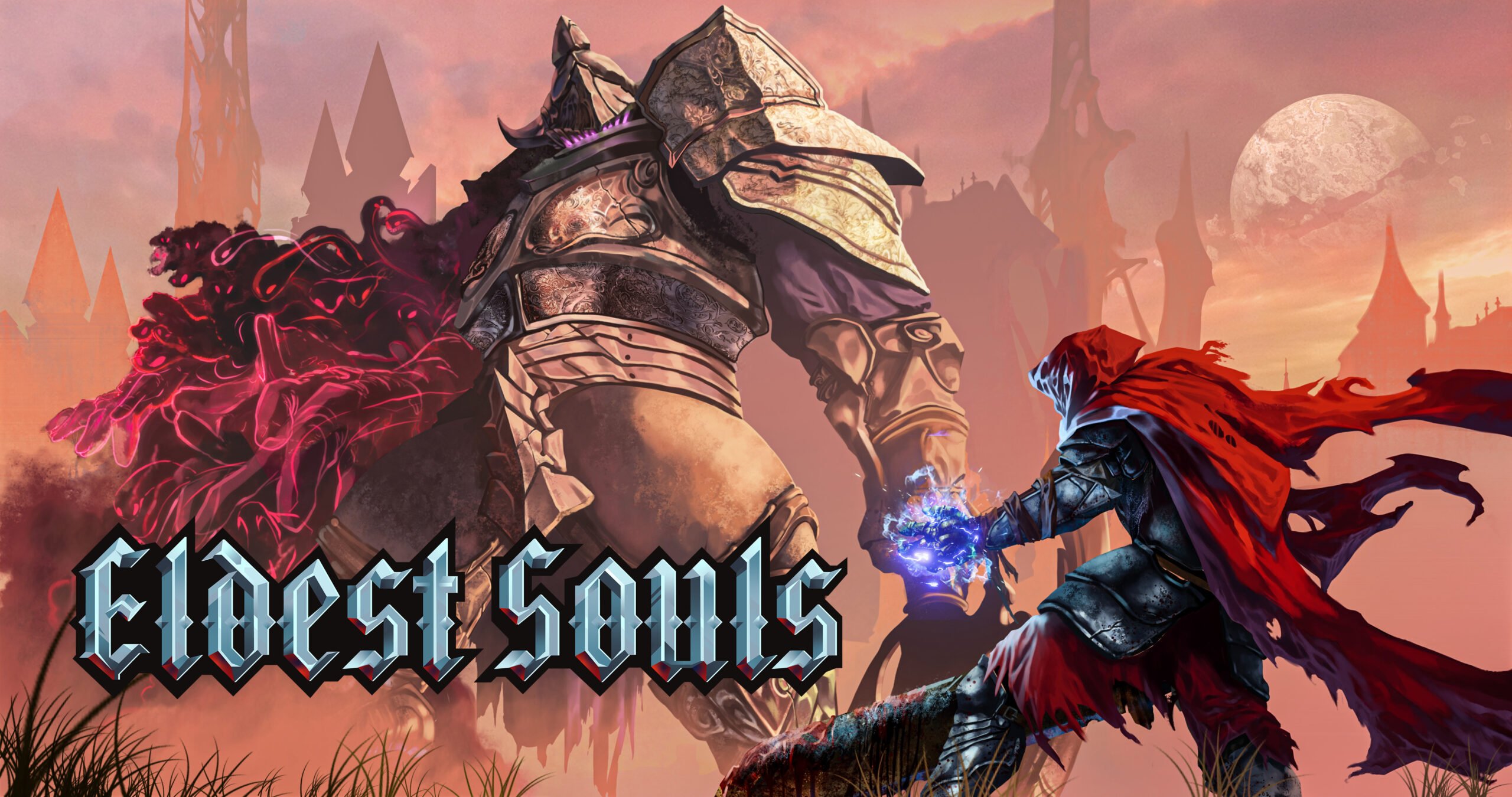 In video games, feelings of accomplishment are often fleeting. Many of the most popular games aim to provide a steady stream of dopamine, hit after hit, one tiny jolt at a time. Eldest Souls, the first game from the small independent studio Fallen Flag, aims to change this. A brutally difficult boss rush gauntlet, Eldest Souls might make even the most hardened player crack their controllers and grit their teeth. But with its varied combat and deep mechanics, the satisfaction of mastering Eldest Souls far outweighs the hurdles it takes to get there.

From its stirring opening cutscene (told in full in this story trailer), it is abundantly clear that Eldest Souls is a passion project. Masterfully scored by composer Sergio Ronchetti, this gorgeously animated and voiced slideshow paints a picture of a fallen fantasy world. A land on the brink of destruction is in the throes of final collapse. Old gods wage war on hapless humans, tearing the world asunder. A lone warrior, wielding a massive obsidian greatsword, is the last hope to slay the corrupted old gods. It may be too late for humanity, but whatever comes next might have a better shot.

Fallen Flag Studio is a small team of developers, but Eldest Souls is an incredibly impressive debut. The game feels laser-focused on delivering a specific experience: the full-body buzz that accompanies overcoming an exceptionally difficult challenge. Eldest Souls is a pixelated combat-focused title with animation-locked, dodge-heavy encounters in the vein of Dark Souls or Bloodborne. It is also a boss rush game with no smaller enemies to be found. Much like Furi, Titan Souls, or Shadow of the Colossus before it, Eldest Souls does not waste any time before throwing players into epic battles of titanic proportions. But the game also puts its own spin on the formula with deep skill trees that reward player flexibility.

There is really only one directive in Eldest Souls: battle to the bitter end. While this mandate might seem limiting, the game is deeply interested in ensuring that every encounter is more pulse-pounding than the last.

When focusing on a limited set of mechanics, a game must be confident that those mechanics are good. Fortunately, what Fallen Flag has created is a robust combat system centered around a handful of genuinely brilliant design decisions. The way Eldest Souls manages to feel fresh over the course of back-to-back boss fights is impressive. There are minor nitpicks to be had but on the whole, Eldest Souls nails what it sets out to do.

At the very start of the game, players are pitched against two bosses that are basically meant to train them. The first, The Watchdog, is big and intimidating but ultimately a piece of cake. This fight is meant to teach Eldest Souls‘ most useful gimmick: the Bloodthirst mechanic. After holding down a button to charge their attack, players can lunge forward with a swipe of their sword. If the attack connects, the Bloodthirst buff is activated for a brief period of time. As long as this buff is active, the player character has increased movement speed and attack power. But more crucially, every attack during Bloodthirst heals the player character. Players can also tap another button during Bloodthirst to trigger Bloodburst, a powerful strike with varying effects. Bloodthirst is massively powerful, but when faced with the scale and ferocity of Eldest Souls’ boss fights, players need every advantage they can get.

Aside from Bloodthirst, Eldest Souls also has a dash/dodge mechanic tied to a stamina meter. The stamina meter refills if players refrain from dodging for a brief period of time. Dashing makes the player invincible for a split second and covers a fair amount of distance. But the dodge in Eldest Souls is unique in that if the player dodges into an attack, the meter refills substantially faster than it would normally. Players are encouraged to dodge towards danger rather than away from it, and once this clicks, the combat in Eldest Souls becomes much more engaging. The dash might feel slightly sluggish for those who play a lot of isometric action games, but nailing down the timing feels incredibly satisfying.

The fight immediately following The Watchdog is where the game really kicks off. The Guardian is a black-clad hulk of armor and swirling energy, and acts as a real test of skill. While during The Watchdog fight tutorial messages flash on the screen, The Guardian battle affords no such luxuries. Learning when to charge and unleash a Bloodthirst strike is key to success, as is internalizing The Guardian’s attack patterns. Defeating The Guardian awards players their first Shard, which grants a powerful ability that can be tied to the dash, fired off on its own, activated with Bloodburst, or even bound to other unlockable skills.

After the first few fights, players have the chance to start experimenting with the skill tree, another high point of Eldest Souls. Players can respec their skills for no cost at any time, which feels unusual for a game with “souls” in its title. Don’t like how the damage-focused Berserker skills constantly have the player taking damage over time? Why not try the Windblade abilities, which focus on increasing movement speed and building up the powerful Windslide dash? There are three fighting styles, and each style has two branches of skills to flesh out. Within those branches are other options to experiment with, meaning that players can tinker to their heart’s delight until they find a build that works for them.

Of course, skills aren’t free, and skill points are only earned from defeating additional bosses. As a result, the first three or so boss fights have a steep learning curve as the player won’t have unlocked any helpful combat skills at that point. After having some tools at their disposal, players can appreciate the overall structure of Eldest Souls. With a few shards and skill points to play around with, character builds in Eldest Souls start to feel personal and powerful.

Outside of battles, there is the Citadel to explore. The surprisingly varied environments hide secrets in plain sight, and eagle-eyed players will be able to find plenty of items and scraps of lore strewn about. Some items are key to completing side quests and are found by talking to the few surviving NPC characters. Only the most curious will be able to satisfy quest conditions, but the rewards are often worth it. Most quests are no more complicated than returning a special item to a specific location, but finding those items and locations requires players to go out of their way. Rewards come in the form of permanent inventory items that provide substantial stat bonuses, so it’s always worth it to nose around the world for unexplored areas.

Though it is simple to jump from one battle to the next, exploring the world offers a kind of respite. Bosses are merciless and often require dozens of attempts just to grasp a few of their attacks. In classic souls fashion, there is often a change of state about halfway through a boss’s health bar where the boss may become enraged or start using different strategies than they had previously. For the average player, it is nigh-impossible to one-shot any given boss, which might prove frustrating. Having the chance to explore and soak in a little atmosphere is the perfect way to cool down before gearing up for another attempt to take down an Old God.

Eldest Souls is never easy. Bosses often feel unfair at first, and players can die seconds after entering an arena if they aren’t prepared. But rather than feel frustrating, Eldest Souls feels empowering. The game has that intangible feeling of making players want to try again, and again, and again, until they’ve achieved mastery. It’s standoffish at first blush, but as players come to terms with the mechanics, Eldest Souls reveals itself to be far less prickly than it appears.

Part of this is due to being able to instantly retry a boss fight rather than have to travel to them every time. Much of the perceived difficulty of something like Demon’s Souls or Bloodborne lies in how far boss fights are from bonfires or lanterns. Players can get discouraged by the time it takes to reattempt a tough battle, but in Eldest Souls it is significantly easier for momentum to stay high as players can dive right back into a fight instantly. Reading boss’s fight patterns is essential to victory and the way Eldest Souls encourages players to try, try again without punishment feels great.

Of course, there is much more to the game than the ten main boss fights. After a victorious first playthrough, a much more challenging new game plus is unlocked where bosses gain new attack patterns and player skills cost more skill points to purchase. Eldest Souls is definitely aimed at a certain type of gamer, one who can withstand a great deal of punishment and enjoy the pain. But there is plenty to appreciate beyond the difficulty. The art direction and music are fantastic, and the heartbreaking lore sprinkled throughout the blasted Citadel is very evocative.

Eldest Souls might not be for everyone. but for those who love a challenge and aren’t scared off by the adage “practice makes perfect,” it’s a worthy endeavor.