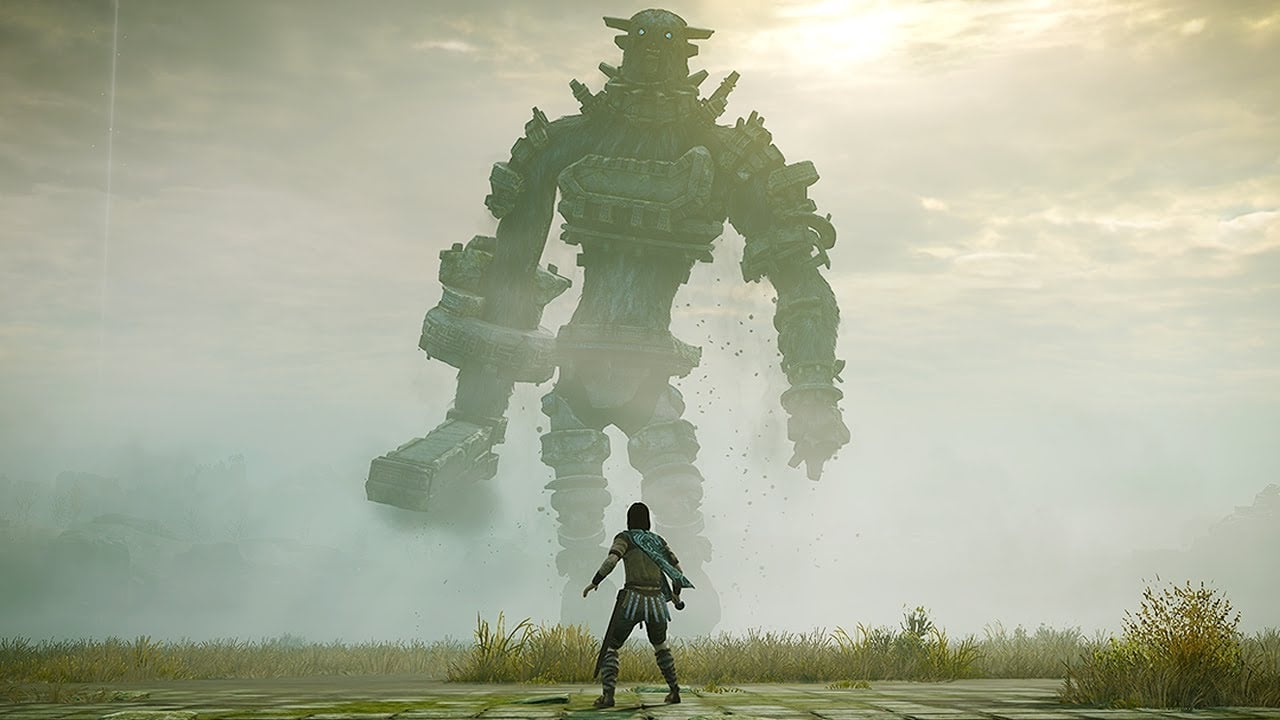 Shadow of the Colossus Review

Released for the PlayStation 2 in October 2005, the original Shadow of the Colossus was a medium-defining experience that capped off its console generation with emotive nuance and potency that fed into the zeitgeist question “Are video games art?”

By now the question seems trite and the answer obvious, but a decade ago, few games were raised in response to it: Okami, Ico, The Wind Waker, Beyond Good and Evil, and, perhaps foremost, Shadow of the Colossus. By quickly elevating Shadow of the Colossus to the top of a tall pedestal, it became arguably among first games to not only be widely interpreted as artful, but as beyond traditional design critique, for better or for worse.

The new Shadow of the Colossus on PlayStation 4 is a sensorily stunning remake of the 2005 original, but it slightly muddies the game’s philosophical waters and mutes parts of the experience.

Stepping Back Into the Shadow

The premise is simple: Armed with sword, bow, and loyal steed, the hero must slay sixteen colossi scattered across a vast and varied landscape to revive the corpse of a lost loved one. These sixteen colossi structure the game, with nearly all gameplay built around two objectives that provide a spiritual ebb and flow: find the next colossus and kill it. Finding a colossus requires using the sword as a dowsing instrument that points the player in the direction of the next colossus.

Slaying the colossus is a more varied experience, but typically involves engaging in puzzle-combat to unearth and locate a colossus’ weak point(s) and relentlessly stabbing them. Though Shadow of the Colossus is a truly distinct experience, it bears a similarity to Punch-Out!! in its melding of puzzle-solving and combat that requires as much brain as brawn.

At the time, Shadow of the Colossus was a revolutionary achievement, casting aside genre strappings in favor of breaking new ground through purity and poeticism. It was a breath of fresh air in 2005 and it remains one in 2018, when nearly all AAA games operate within the confines of long-calcified genres. Those elements of Shadow still profoundly resonate, from its vacant world, to its minimalist symbolism, to its unsettling tone, to its moral ambiguity, to its vicious violence, to its ruinous awe. They speak to a clarity of vision rare in any medium, let alone one dominated by a cash-hungry industry in love with design-by-committee sequelism. Shadow is and always was art, but it is not and may never be a game without significant and fascinating blemishes.

These flaws are well-documented — a backwards control scheme, unwieldy horseback riding, imprecise platforming, etc. Because of them, Shadow of the Colossus felt like it played originally but not optimally. But criticizing Shadow always felt like sticking your neck out because many fans argued the more questionable aspects of its design were intentional, and therefore justifiable. The controls were intentionally abstruse. The character animation intentionally laggy. Agro was intentionally difficult to control. But even if the game, as art, was exactly what Ueda and Team Ico wanted them to be, can that blanket defense of artistic intentionality be used to defend every aspect of Shadow of the Colossus?

Regardless of your stance on that particular debate, Bluepoint Games’ remake shakes up some of Shadow’s most controversial features in what feels like an attempt to modernize Shadow for a new audience. On one hand, the remake sharpens the gameplay. The default control scheme is much more intuitive this go-around, swimming is slightly quicker, wall jumping off ledges is more precise, mounting Agro is a piece of cake, bow and sword aiming is more responsive, and the camera is more malleable (though it still gets stuck in certain situations).

Foregrounding the baseline gameplay experience, these changes all feel like improvements to the original, but they also chip away at the lumbering game feel of the original that many believed central to the experience. Personally, I find the remake a smoother and more enjoyable experience, although it does feel somewhat stripped of the original’s sense of disempowerment.

Even moreso, I wonder if the authorial intent of the original is lost on the remake’s aesthetic front. There are instances of the game’s new, more naturalistic, lighting system diminishing the impact of confronting some colossi and the otherworldly feel of the original’s landscape. And when wildlife swarms a once-vacant region, it feels the remake seems to eschew the original’s spiritual isolation in favor of a lusher environment.

When it sprinkles that landscape with collectible coins (of all things, why something so uncharacteristically on-the-nose?) it feels like a lazy gesture at contemporary open-world design tenets. Although these changes could be interpreted as attempts to modernize the original game, they grate against the original’s ethos.

Furthermore, some of the most aggravating moments of the more glaring colossi-specific issues in the original seem to be untouched. For example, one battle about halfway through the game depends upon the player intuiting that they can pick up items (something the game never teaches and never requires outside of this moment) while being pummeled by a colossus who can collide with the player numerous times in a row, giving them minimal time to interact with the item they probably aren’t even aware they can interact with. It’s an incredibly unintuitive and sadistic moment that represents a rare low point, and it could have easily been sharpened in this remake.

On a similar note, Agro can still be incredibly cumbersome, especially in specific passageways plagued with invisible walls and unintuitive camera movement. Regarding Agro specifically, it’s interesting to note that even though controlling him is considerably simpler, several other horseback riding issues were never fully solved, possibly undermining the original authorial intent while still remaining flawed.

These changes ultimately amount to a game that feels like an immensely talented cover band — it recreates the original to a sometimes masterful degree, but it also sometimes lacks an inimitable core. Although I adored revisiting this world, and was pleasantly surprised at how thoroughly it has been rebuilt and modernized, I wonder about Bluepoint Games’ M.O. and whether or not Ueda feels like this remake is everything he wants it to be.