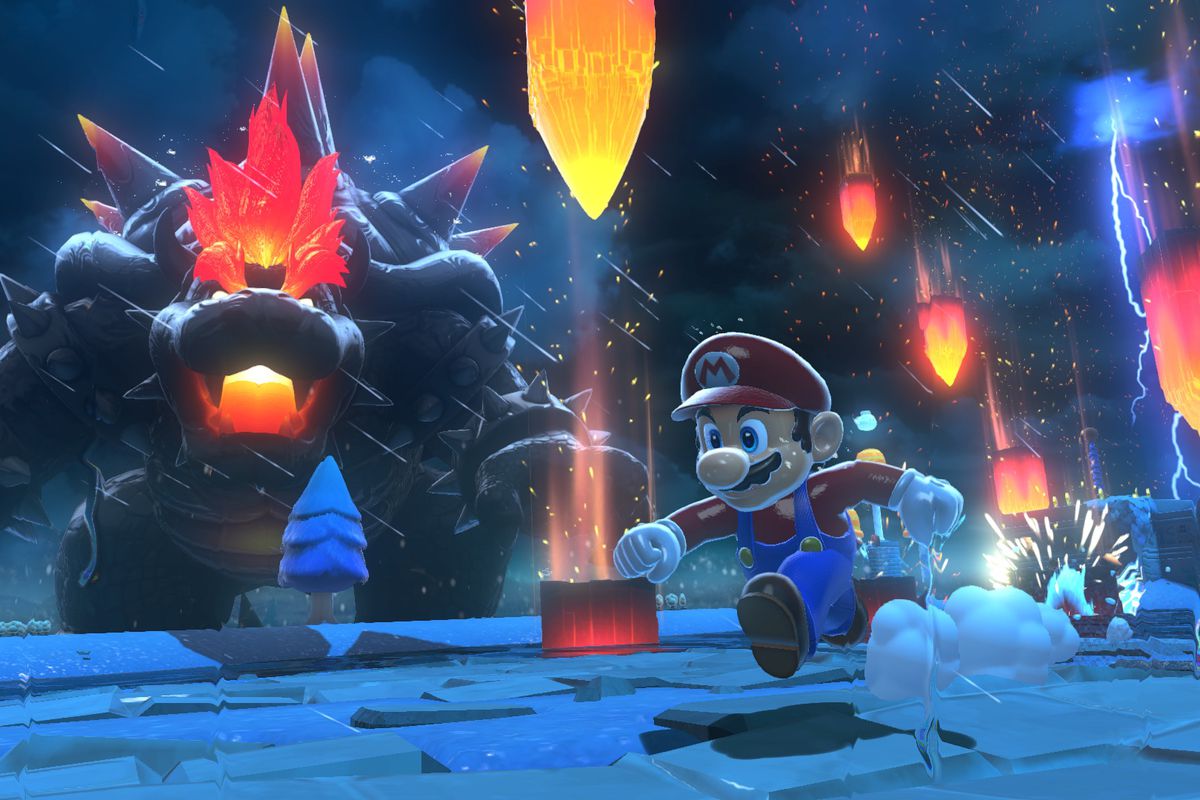 One aspect of the newly-released Bowser’s Fury that has disappointed some players is its brevity. Advertised as a standalone adventure packaged with the Super Mario 3D World Switch port, Bowser’s Fury can be completed in around three hours, and it only takes a few more hours to collect all of its Cat Shine collectibles. This runtime starkly contrasts with other 3D Mario outings, which typically take over 10 hours to complete for the average player. But with the right mindset, what some may see as Bowser’s Fury’s biggest shortcoming can become its biggest strength. The open world in which the game takes place is incredibly condensed and packed with challenges, and various smart design decisions allow the player to significantly reduce downtime. The game can be incredibly fast-paced if the player wants it to be, and this combined with the short length makes it vastly enjoyable to replay and complete at nearly any time.

Escaping the Confines of AAA Expectations

Bowser’s Fury’s limited amount of content eliminates a frequently recurring problem within the 3D Mario lineup. AAA games as a whole have long been trending towards longer experiences to justify their $60 price tags, and although the typical Mario game boasts a fairly modest length for those who just want to reach the end credits, the series is nonetheless beholden to this pressure. As a result, some of the 3D installments pad themselves with an unnecessary amount of collectibles so that the 100%-completion playtime is more comparable to those of other major titles. For instance, Super Mario Odyssey features at least 880 collectible Power Moons in total, and given the astronomical size of that number, many of the challenges associated with these Moons feel insubstantial and don’t add much to the experience. Kicking rocks around and ground-pounding random glowing spots just aren’t much fun by themselves, and this padded-out content makes what is otherwise an incredibly enjoyable romp into an exceptionally exhausting experience when trying to find all of the collectibles.

Since Bowser’s Fury is technically bonus content for the Super Mario 3D World Switch port, it is much less beholden to the expectations many have about game length. As such, it can afford to feature as much content as it needs to without bloating the experience. The open-world, for instance, is just vast enough to convey a sense of scale while being compact enough to facilitate meaningful gameplay scenarios and ease of travel. Plessie returns from Super Mario 3D World as a mode of transport around the world, and thanks to her speed, her newly-added dive jump ability, and the various gold rings and powerups strewn about, backtracking to previous areas rarely ever feels like a chore. In total, the game only features around 100 collectible Cat Shines for those who want to get 100% completion, which ensures that a large percent of the game’s challenges feel substantial and fun to conquer. The game does repeat many of its objectives to reach that total, but there is still enough variation in each one to make them feel justified, which contrasts against some of the borderline copy-and-pasted content found in Super Mario Odyssey — or even Super Mario 3D World itself.

The meat of Bowser’s Fury lies in its 11 major platforming areas, which each contain five Cat Shines to collect. Taken at face value, these numbers don’t seem that much smaller compared to some of the previous games — Super Mario 64, for instance, features 15 major levels with seven Power Stars to find in each. But since Bowser’s Fury’s areas are relatively compact and the objectives associated with each Cat Shine are fairly short, players generally won’t stay in one area for very long. This gives the adventure a very brisk pace, as players will be constantly moving from one area to the next to complete the handful of challenges they present. Another factor contributing to this pacing is how the objectives are doled out — each area only has around three Cat Shines the player can obtain on the first visit, as the other objectives will only appear once the player leaves and returns to the area later.

This seems like an irritating way to pad out the game, but it ends up not hurting the game much at all, as it encourages players to constantly jump between areas to complete their challenges bit-by-bit, which further contributes to the game’s sense of manic variety. In addition, players don’t need to move very far from the area in order for the next objective to trigger, and there are a number of distractions in the world for players to partake in, such as extra challenges with Plessie and optional islands for extra coins and powerups. These distractions, combined with the aforementioned ease of travel, mean that the amount of downtime caused by these gradually-spawning objectives is exceptionally low, and they further trim the game of excessive fat.

Making the Most of an Ever-Present Threat

All of these elements make Bowser’s Fury the ultimate “short-but-sweet” experience, but none of this addresses the elephant in the room: Fury Bowser. After every six minutes or so, Fury Bowser will come crashing onto the scene and harass the player with raining fireballs and concentrated blasts of flame. IGN’s review of Bowser’s Fury describes these moments as “interruptions,” but Fury Bowser’s assaults don’t actually interrupt much of anything. It is more than possible to platform through even the most precarious sequences with Bowser on the loose, and some of the giant stakes that spawn when he is active actually make certain sections easier, encouraging savvy players to take advantage of his appearances to coast through the environment. It adds a fun layer of unpredictability and dynamism to the experience, and it works even better because of the game’s short length. If the game were about as long as the average 3D Mario title, then the Fury Bowser mechanic would likely become stale and tiring. The brevity of any given playthrough means that Fury Bowser leaves a major impact on the experience without overstaying his welcome.

There is one significant mechanic that runs the risk of tanking the game’s brisk pacing, however, and that is the fury block feature. Each of the main areas contains at least one Cat Shine hiding behind a stack of fury blocks, which can only be destroyed by luring Fury Bowser’s fire blasts toward it. Normally, collecting a Cat Shine will force Bowser back into hiding and start the six-minute cycle over again, which means that players usually cannot multitask and collect multiple fury block Shines per Bowser appearance. Making the player wait through over 11 separate six-minute cycles would severely harm the game’s pacing and speedrunning potential, but the developers included a clever workaround for the player to exploit. Before the final battle in the main story, Fury Bowser will remain permanently active until the player collects the Giga Bell, and Cat Shines will no longer interrupt his rampaging.

This moment is obviously meant to raise the story’s stakes, but it also liberates the player by allowing them to collect the aforementioned fury block Shines without resetting the six-minute cycle. This effectively encourages the player to make one final lap around the world to pick up any fury block Shines they may have missed uninterrupted. This single design decision brings the game’s frenetic pacing back into full swing, and it rewards the player’s knowledge of the game by removing any potential for downtime, keeping the game short and fun to replay several times over. The only time where the game genuinely betrays its approach to pacing is with the lucky island Cat Shines, which can only be collected once per six-minute cycle. And since these five Shines are locked behind the postgame, it’s currently impossible to do a full100% speedrun without going through some downtime waiting for Bowser to appear or using the Bowser amiibo. That being said, players going through the game more casually can still plan their routing in such a way that a 100% playthrough still manages to be a continuous, flowing experience for the most part.

In the end, Bowser’s Fury is a tightly-designed package that more than justifies its short length. The player has something to do and consider during every second of gameplay, and most potential moments of tedium can be circumvented through efficient planning. In a series prone to padding out its runtimes with excessive fluff, it’s refreshing to see a standalone Mario experience that is confident enough to present all of its ideas and end exactly when it needs to. It’s an exceptionally fun game to quickly pick up and play all the way through during a slow afternoon or after a long workday, and the gaming landscape deserves to have more titles like it.