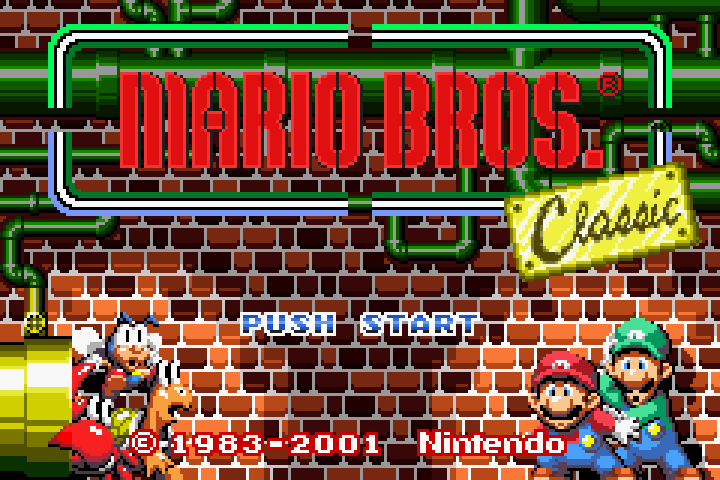 Choose a game. The reason you purchased that handheld version of your favorite classic Mario title or the multiplayer pack-in whose core-focused lied on being just that? As the Game Boy Advance turns 20 on March 21st along with the first entry in the Super Mario Advance series there is seemingly one key handheld title from the plumber’s endless franchise that was never been able to quite resonate with its lineup of heavy hitters up until its system’s discontinuation. It may never have been just what you needed, but making a grand total of five appearances on its home unit, Mario Bros. Classic was a remake of 1983’s Mario Bros. that was included with all four of the Super Mario Advance remakes along with Alpha Dream’s first critical role-playing knockout Mario & Luigi: Superstar Saga. Two decades after its release, Mario Bros. Classic still has never achieved what it set out to achieve long ago, yet the glorious spin on its acclaimed arcade father will always receive the recognition it never claimed from its biggest fans.

Designed to showcase the multiplayer processing power of what Nintendo claimed was the “equivalent to a handheld Super Nintendo”, Mario Bros. Classic was originally intended to be an entirely separate project from the first Super Mario Advance game. With the same developers working on both titles, Satoru Iwata, Toshiaki Suzuki, and the rest of the team wanted to use the upcoming Super Mario Bros. 2 remake as a way to introduce new Game Boy Advance owners to the latest graphical spectacle the system could present. Meanwhile, Mario Bros. Classic was going to flaunt the true power of the system with its four-player capabilities. In a complete last-minute hunch, the team decided to include the second in-development remake as an added bonus for adopters of the launch game as Nintendo was seeking a way to sneak in some multiplayer content into the first line of its Game Boy Advance hits; little did they know that very same game would end up being repackaged five times over the lifespan of the handheld brick’s successor.

Mario Bros. Classic was the same arcade game, but only at face value. The upgraded version made two critical changes to its well-known arcade formula: when it came to movement, the remake adjusted both how the titular brothers moved throughout the tight four corner warp pipe zone. Due to the reduced pixel count and screen size of the Game Boy Advance, Nintendo was forced to accommodate for the game’s lack of ability to showcase all of its surroundings in a singular frame- ironic considering the additional opening introduction of Super Mario Advance was supposed to show how the new handheld was a massive leap from its predecessor in both tech and size. Players now had to utilize the shoulder buttons to scroll the screen if they wanted to see what was going on within their out of view floor. However, to balance out this factor the second implemented change of no longer having Mario and Luigi move in arc directional jumps would not only help players conquer its diminished aspect, but excel upon its original foundation.

The alteration in how Mario and Luigi would jump made Mario Bros. Classic its own entity worth playing from the original as the game inherited the buttery smooth physics of Super Mario World combined with the well-regarded and quick-witted thinking of the arcade game. A new challenge was born. Mario Bros. Classic upholds its simplicity, yet it still manages to present more variety than any other interpretation of the game. As players continue to knock out each incoming phase the scenery and enemy variety will constantly get mixed up for something more refreshing. From the cold sewer to a warm cabin and flying fireballs to permanently frozen platforms, the game is constantly out to keep players on their toes as their surroundings are constantly mixed and matched together to create something slightly less repetitive than before. While the game lost a little of its sense of careful movement from straight jumps, handicapping the player through the means of other limitations only strengthened the genius challenge Mario Bros. always fought for in its cabinet days.

Outside of technical changes with graphics, sound, and movement, Mario Bros. Classic further upped the ante of its chaos by being the first two-dimensional title in the entire franchise to contain the previously emphasized four-player multiplayer mode. Like most other future four-player Game Boy Advance titles that presented physical blocks to accessing its entertaining local mayhem, those who were able to gather three friends with their own links cables and systems were treated to the game’s battle feature that provided extra content to smash incoming allies and enemies with. Spawning the haywire atmosphere of four-play Mario adventures, Mario Bros. Classic forged lovable insanity in its compact environment. The four-player battle mode further individualized the title from its predecessor as the multiplayer content introduced far more new mechanics than in the base game. Even Bowser makes a cameo as the Koopa King finally gets to stand in one of Mario’s first appearances as a massive obstacle to intervene with the competition.

While on the subject of the four-player mode, despite its lack of multiplayer inclusion, the Wii U ports of the Super Mario Advance series oddly includes a palette swap for the third and fourth characters within its coding. Sticking to its purple and yellow color schemes, each palette has received adjusted overall colors to closer resemble both Wario and Waluigi. This may poke towards the fact that perhaps Nintendo intended to update the multiplayer functionality for its Virtual Console rerelease, however, in the end, the adjustments are never utilized as there is no way to access the four-player mode of the game. Even after years of going unnoticed by the public, Nintendo may have thought about seizing the opportunity to revive the underappreciated game mode while the chance was open. Alas, the extra work never came to fruition as the palettes will forever remain as unused content.

Which is ultimately surprising to say the least- both in regards to the history of the multiplayer and Nintendo’s careful treatment of it. The public perception of Mario Bros. Classic is baffling in hindsight. Not only was the game included with five different Mario titles, but every copy of the game was linkable no matter if you were playing Super Mario Bros. 2, Superstar Saga, or Yoshi’s Island. With how many copies were purchased between the five titles standard and later discounted “Player’s Choice” editions after hitting sales milestones, you would have thought Mario Bros. Classic would have been a sure-fire success. Instead, the remaster ended up being nothing more than a tacted on bonus to the public as it was tucked away in every two-dimensional mainline Mario cartridge that made its way to store shelves during the GameCube era.

Finishing off with those aforementioned Wii U Virtual Console ports, when the Super Mario Advance series hit the digital front for the first time since their initial release, Nintendo skipped out on advertising the fact that all the games still included its Mario Bros. remake counterpart- and the same once again happened when Superstar Saga was added to the Virtual Console lineup. As the e-reader levels received the spotlight with the final Wii U port in the series of Super Mario Advance: Super Mario Bros 3., Mario Bros. continued to evade the public eye despite its five-time reemergence over the course of the failed Wii’s follow-up life. Perhaps it is just bound to be seen as a mere extra game to pass the time or maybe no one actually cares for its existence, but there is no denying the beautiful simplicity that the arcade remake provided. Mario Bros. Classic will forever remain a true gem of the Game Boy Advance. Not even its high availability and rereleases could save it from becoming an obscure part of its original counterpart’s legendary legacy, but the true underground plumbers of the Mushroom Kingdom will keep the high-score crusher close to their heart.