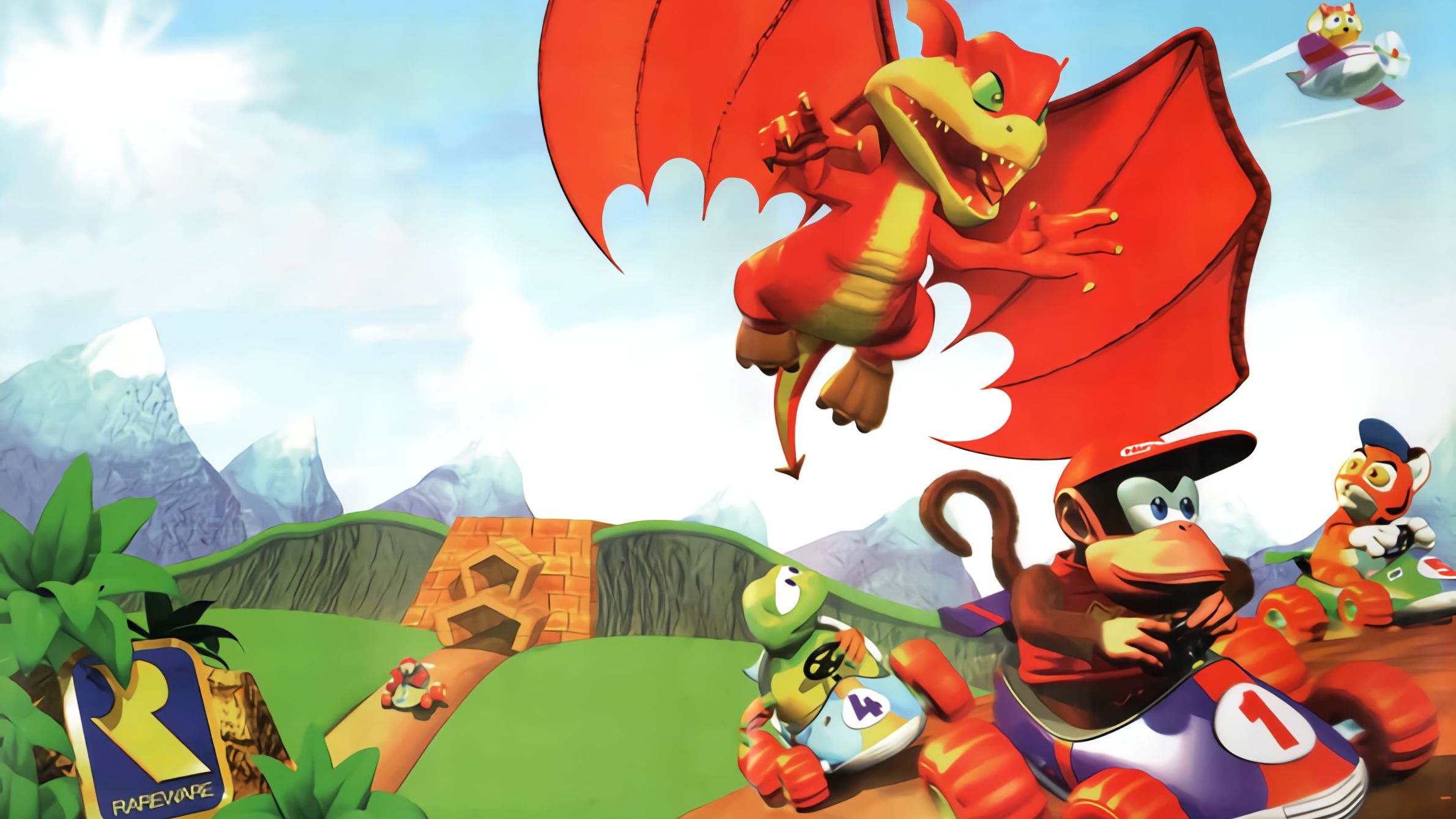 Kart racers are inherently designed to be played with friends. Traditionally featuring on-screen mayhem punctuated with bright colors and charming sprites, the genre is not for serious gearheads or fans of simulation. Typically, you sit on the sofa with a bunch of mates and let the chaos commence. That’s a typical scenario, but Diddy Kong Racing isn’t a typical kart racer. In fact, if you want to truly enjoy DKR you might as well kick your mates out – you’ve got a giant pig wizard to take down.

Considering Diddy Kong Racing was effectively a one-and-done franchise (save for a remaster on DS that isn’t worth mentioning again), it’s absolutely astounding that no other kart racer since – I’m looking at you, Mario – has taken any of the single player elements of Rare’s title and repurposed them in a different universe. Mario Kart may be the king of Nintendo’s multiplayer offerings, but playing alone through the obligatory Grand Prix is a pretty stagnant experience at this point.

Adventure Mode sees you picking your chosen critter – including the debut of Banjo and an insufferably sober Conker – and taking on the mantle of restoring peace to Timber’s Island by banishing the evil Wizpig. Luckily, the pride he has staked in his racing ability means that he’ll recall his gunships and stop trying to stomp small animals to death if you can drive faster than him – handy, that.

Your adventure sees you driving, flying and… hovercrafting(?) around the island’s various themed areas to take part in a variety of game modes and earn balloons from a blue elephant genie on a magic carpet. Of course, there are your standard races and plenty of them, but you’ll also be taking on bosses, slugging it out in battle modes, finding hidden collectibles, and taking part in silver coin challenges. The latter of these game modes is arguably Adventure Mode’s strongest point – even if your character is the only racer who actually has to collect the coins. Scandalous.

The silver coin challenges add a whole new level of tactics and strategy to a race, as typically you won’t be able to grab all the coins on the first lap. The necessity of also winning the race means you’ll need to be keeping mental notes of where they all are in order to plan when it’s safe to deviate from your usual race line to pick one up without sacrificing race position. Some of the coins are really fiendishly placed, so even finding them on the track is a challenge in and of itself, let alone getting over to the coin without ballsing up your chance of winning – and balls it up you will, thanks to the game’s total lack of rubber banding.

Rubber banding is the reason everyone can play and enjoy Mario Kart. Find yourself at the back of the pack and your next item will probably be some kind of god-tier leveler that will ensure you either get yourself right back in the mix or ruin the chances of the player in first winning. It’s a system that is both inclusive and frustrating; newcomers can have fun and cause mayhem, but skilled players will often bemoan cheating AI or plain bad luck. Diddy Kong Racing doesn’t care about any of that – for this game, skill is law.

Instead of semi-random items coming from mystery boxes, DKR has colored balloons that signify exactly what power you’re going to get. As time goes on and skill levels increase, the only item you’ll ever want is the blue speed boost balloons. They always seem to be placed perfectly for when you’re just about to need them in order to maintain an insane lap time, and this opens up the potential for crazy skill-based speedrunning without the need to worry about blue shells or lightning bolts. The only obstacle separating you from mastery of the game is your own level of ability – something Mario Kart really hasn’t been able to claim since the SNES days.

As previously indicated, the emphasis on track knowledge and skill means that DKR really doesn’t work in multiplayer unless both players are of a similar skill level. If you’re a newcomer sitting down with a veteran of the game, they will lap you. Twice, probably. This also means that learning and mastering the games feels all the more rewarding. Even now, the game is tight and responsive – more so in karts than the fun-yet-fiddly planes and hovercraft – and the smaller track lengths mean that you can eventually be blasting through entire races in under a minute.

It’s admittedly understandable that Nintendo hasn’t adopted the pure skill-based approach that DKR has – it probably wouldn’t sell as many copies as it does if it were so unforgiving – but what’s baffling is why Mario Kart has never had it’s single-player spruced up with a similar adventure mode. Imagine having a whole Mushroom Kingdom filled with secrets and mini-games to explore. Hell, DKR clearly took the idea of entering races from a hub world right out of Super Mario 64’s castle, and for Nintendo not to steal that idea back again for Mario Kart is a real missed opportunity.

Perhaps the reason we haven’t seen a Mario Kart game take the boss race idea is that all of Mario’s nemeses are racing right alongside him, or maybe because the bosses in Diddy Kong Racing are absolute shits. I am being totally serious when I tell you that it legitimately took me NINE years to finally beat the second Wizpig race in Diddy Kong Racing. Granted, it wasn’t a solid nine years of playing, but still. Each boss in the game has two variants, and the second of them (after the silver coin challenges have been beaten) is usually rock-hard. They will come back at you with more obstacles, increased speed, and better powerups, meaning you’ll have to be almost faultless to succeed.

There have been a few failed attempts to revive the series over the years. Donkey Kong Racing, a GameCube title, was revealed via a pre-rendered trailer at E3 2001 but was eventually canceled after Microsoft bought Rare in 2002. Licensing issues arising from that sale also caused Game Boy Advance sequel Diddy Kong Pilot to have its name changed to Banjo-Pilot after Nintendo refused to publish a game they viewed as ‘substandard’. Rare had to drop the DK franchise from the game and released Banjo-Pilot under publisher THQ in 2005.

Even in the last few years, talk of extending Diddy Kong Racing’s legacy refuses to die. We’ve seen footage of Diddy Kong Racing Adventure – a 2004 GameCube sequel pitched to Nintendo from Climax Studios – emerge online, and both the Wii and Wii U had strong rumors of a DKR 2, being developed by Monster Games and Retro Studios, that never came to pass.

It seems like we may never get a true sequel to Diddy Kong Racing, but of course, that just means the original is this unique entity. A game that legally cannot ever be reproduced for, or even ported to, modern consoles that stands head and shoulders above its competition for the (not real) prize of ‘The Pro’s Kart Racer’. It still has a vibrant speedrunning community – the world record for 100% was broken just 22 days ago – and remains charming, playable and challenging 25 years after release.

If you do nothing else, just boot up the game, enter the cheat code of JUKEBOX and listen to the incredibly vibrant soundtrack. If you’re anything like me, though, I bet once you’ve got the game running you’ll remember you’ve got a decades-old score to settle with a certain giant pig or an anthropomorphic clock’s time trials to beat. If nothing else, I finally managed to unlock TT while preparing to write this article, so I’m a very happy man. Now if only I actually knew how to use him…