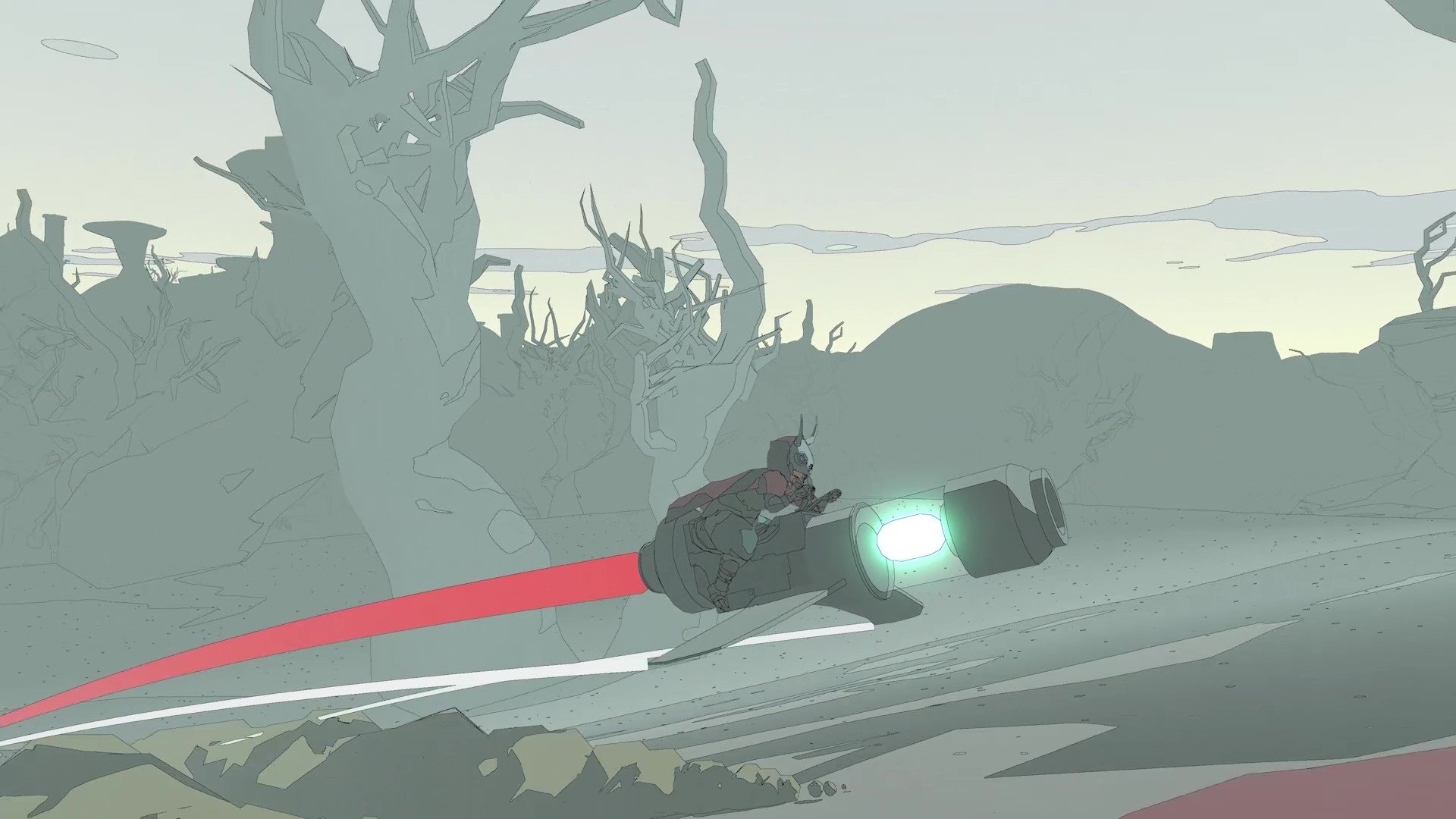 Some of the most memorable gaming experiences are had when a studio narrowly focuses on one central design philosophy. The Legend of Zelda: Breath of the Wild is heralded as one of the greatest games of all time not because it had the most cutting edge visuals, tactile combat mechanics, or gripping narrative, but because it perfectly executed its design philosophy of exploration-driven adventure. It’s in this same way that Sable finds its success despite some jarring technical hiccups. Rough edges aside, it expertly succeeds in filling players with a sense of pure, unbridled adventure.

Sable starts with a simple premise. The titular character has just turned of age, and she’s ready to embark on a rite of passage called “Gliding” which involves leaving her clan and going off to find her true calling (something akin to taking a gap year before university). After saying her goodbyes, building her hoverbike, and completing a rite of passage, she’s let loose on an expansive open world with little direction outside of a single tip from the clan leader. From there, it’s entirely up to you to decide where you want to go and how you want to spend your time.

The overarching goals of Sable’s Gliding are to gain worldly experience, learn more about yourself, and settle on a career path. There’s a wide variety of ways to go about doing this, and none of them limit the other. Sable will come across settlements and rest stops where other nomads and tribes reside, and there she can take on quests to earn badges towards a particular career or simply to help someone in need of assistance. As she completes these tasks Sable assesses whether or not she can see herself living the lifestyle of a guard, cartographer, trader, and so on; it’s a nice reminder that there’s always a purpose behind her exploits.

Apart from quests (“main quests” and “side quests” aren’t distinguished), there are several other ways to spend time in Sable’s world. Trials are scattered about that test players’ ingenuity and platforming skills and, if bested, yield meaningful rewards like valuables or new masks to adorn Sable with. Every natural surface in the game is climbable, and there are often rewards for going out of one’s way to do scale tall structures like new clothes, scrapped metal, and more. On a related note, there are a ton of chum eggs scattered across the map to find that, similarly to Korok Seeds in Breath of the Wild, let players upgrade their stamina when a certain threshold is reached, further enabling players to climb ridiculously tall mountains and cliffs.

A constant companion throughout all of this is Simoon, the aforementioned semi-sentient hoverbike that takes Sable across vast expanses of desert and empty wastelands. Just as owning a car is a must for anyone living in a rural area, Simoon is inherently necessary for exploring the surprisingly massive world Sable has to offer. That combined with having to go through the effort of manually gathering the bike’s components and assembling it instills a sort of care for Simoon that’s quite rare with most other vehicles in video games. I found myself subconsciously caring about parking it properly whenever I arrived at another settlement, and took great pride in customizing it to look just right whenever I found one of the many color kits scattered across the land.

Of course, it’s impossible to discuss Sable without mentioning its striking Moebius-inspired aesthetic. Landscapes are awash in multi-colored hues and abstract structures loom in the distance before coming into focus as sketches with roughly drawn lines. There’s nothing quite like it, and though the simplicity of the style may be a turn-off to those used to crisper visuals, it nonetheless adds a weightiness to the world of Sable that meshes perfectly with the more grounded, traditional culture of its people. The art direction, perceptive writing, and deeply atmospheric soundtrack by the musical geniuses at Japanese Breakfast come together to achieve an organic presentation that’s tough to pull off at the AAA level, much less for a small indie studio.

Unfortunately, this beautiful art is somewhat marred by persistent frame stuttering, slowdown, and pop-in. One bug was even attached to earning a career badge, requiring me to restart the game before I was allowed to progress (thankfully Sable has a Pokémon-like save system that lets players save and load from anywhere on the map). Shedworks has acknowledged the myriad of performance issues but there have been no fixes at the time of writing.

Though my escapades in Sable are far from over, it’s tough to overstate how impressive of an experience it’s been to just explore the world. The level of care that’s gone into building out every bit of culture and mystery in Sable is astounding, especially since it’s a much more visceral experience than something exponentially more text-heavy like Mass Effect. There are still traditional game design elements involved–checking nooks and crannies and venturing into suspicious structures is nearly always rewarded–but the pull to explore for exploration’s sake and the drive to take my destiny into my own hands by helping out whatever strangers I came across have only been done as well in Breath of the Wild and The Outer Worlds, respectively. Just wait a bit until patches come in for the optimal experience.