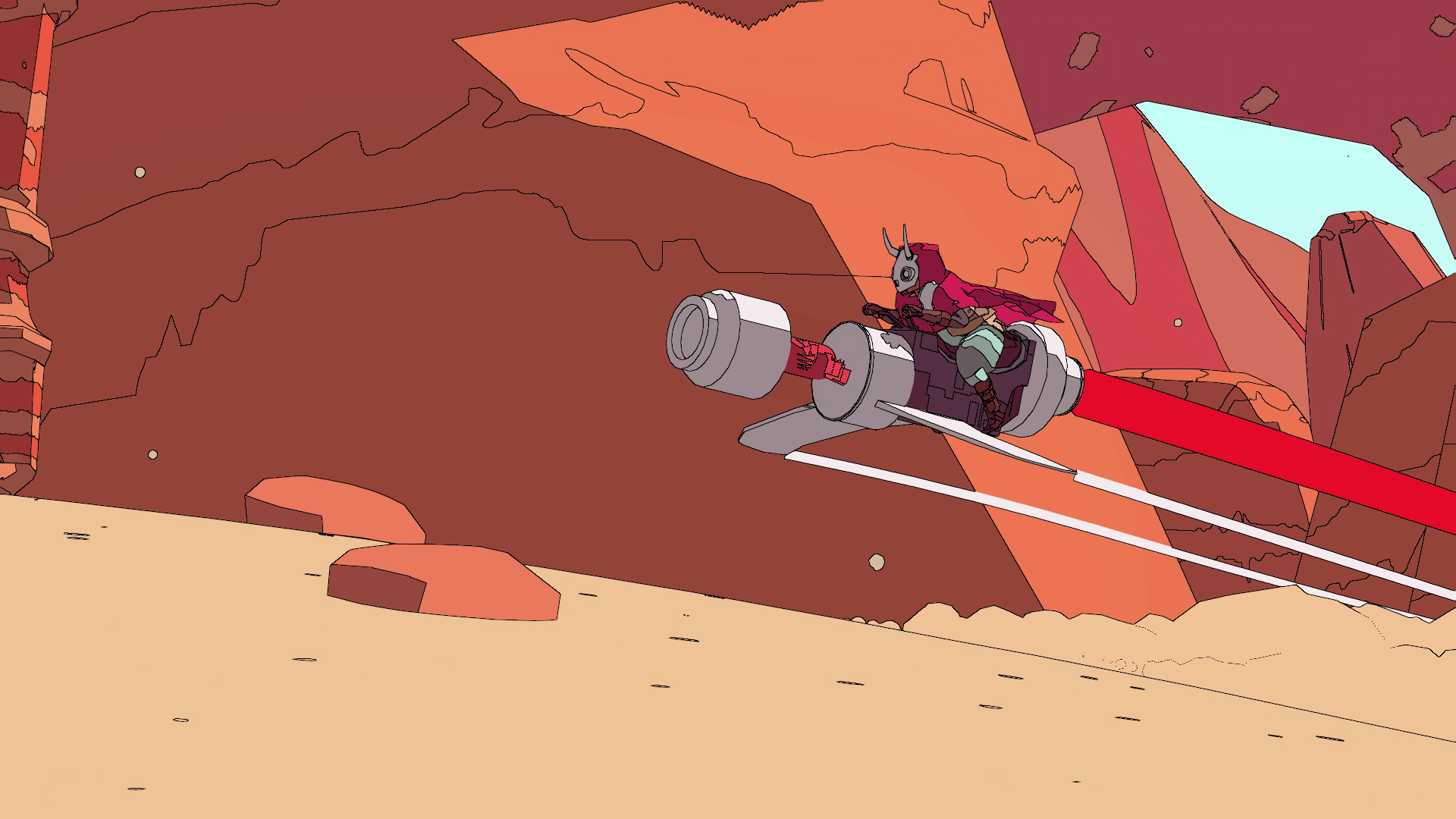 Sable, a stunningly beautiful exploration game from 2021, is all about the titular character finding her place in the world. When her people come of age, they participate in the Gliding, where they are given a blessing and freedom to explore the land and figure out where their passions lie. A poignant game with a striking art style inspired by fantasy artist Jean “Moebius” Giraud, Sable allows players to set their own goals and meet them more or less how they please. Now, with the game’s release on the PlayStation 5, an entirely new subset of players can experience this masterpiece for themselves. When DualSense integration is factored in, Sable on the PlayStation 5 becomes a revelatory experience.

Call of the Wild

There is much to love about Sable. The blasted landscape is frequently gorgeous, with different color palettes shifting from one hue to another as the player transitions to different parts of the map. Players can climb damn near anything in the environment, as long as they have the stamina to do so; increasing Sable’s strength by finding Chum Eggs in out-of-the-way places and delivering them to a specific location is always a joy. Finding other collectibles, from hoverbike parts to costume pieces, is always satisfying. Sable is the rare open-world game that eschews combat, focusing instead on exploration and creating internal stories. But there is still friction in Sable, to be found in looking at a distant landmark and thinking, “How the hell do I get up there?”.

At the outset of Sable, players are tasked with finding a mask during their Gliding. Masks are created by the Mask Caster, who will cast a mask only after the player finds or earns three badges associated with that mask. Love climbing impossibly high rock formations? Maybe the Climber’s Mask is the one to pick. Enjoy scouring crashed spaceships for pieces of junk? The life of a Scrapper calls. Earning badges and choosing a mask is the main objective, but players can make their own goals, or simply appreciate the scenery.

Picking a direction, hopping onto a hoverbike, and heading there is more or less the main thrust of Sable‘s gameplay. But there is tremendous joy to be found in being distracted. The player may be racing towards a mountain range, only to notice a mysterious ring jutting out of the sand just slightly out of their way, and make a detour to investigate. An NPC may task the player with heading to a cave to gather some rare glowworms, and on their journey there they find themselves compelled to climb a crystal-covered plateau.

Sable is more than just its open-ended gameplay loop. The aesthetic of Sable is instantly iconic, with every frame looking like a pen-and-ink drawing. Players can even choose the thickness of lines used, and how bright they want the colors to appear. It would be too easy to say that the game looks like a graphic novel come to life or an animated comic strip; it is simply Sable.

To coincide with the rerelease of Sable on a new platform, developer Shedworks has included additional content (not PlayStation 5 exclusive). Players can satisfy their desire for more collectibles with the integration of a fishing minigame. All they have to do is find a trawler in the wasteland, where a lone sailor will provide Sable with a fishing rod and very brief instructions for how to catch fish. Hook enough of them, and Sable can earn the Angler’s Mask. With the fishing sidequest comes the arrival of an in-game Vivarium, a kind of museum or sanctuary that players can fill with caught fish and captured butterflies. The Vivarium plays to Sable‘s greatest strength: that players feel compelled to go out and explore the world, seeking out secrets (or critters, in this case) in every corner of the map.

The fishing plays about as well as any other fishing minigame (that is: on par with Stardew Valley but significantly more fun than the one featured in Harvestella). Players can fish anywhere–they don’t have to seek out a body of water or go to a special zone. The entire sandy expanse has fishin’ hole potential. Certain fish are limited to specific areas, but purchasing clues from the Vivarium operator as to their whereabouts ensures that players can probably find the fish they want to find.

But the real draw to the PlayStation 5 version of Sable is its DualSense controller integration. It may seem like a small feature, but the DualSense makes Sable feel more immersive than ever before. Early on, the player meets Sizo, a machinist who helps them construct their hoverbike. Once the bike has been built and named, the player feels a connection with the newly-christened Simoon. Riding Simoon through the trackless sand dunes is one of the best-feeling uses of Sony’s gamepad. The controller rumbles when hurtling through salt flats or up steps, but because of Sable‘s lore about hoverbikes having personalities and even sentience, the DualSense quickly becomes a stand-in for Simoon itself. Trigger resistance activates upon acceleration, and as the player customizes their bike and upgrades its stats, they’ll feel the difference immediately once they go for another ride.

The haptics also trigger when Sable glides, feeling like a heartbeat in the hands of the player. DualSense integration is often hit or miss, but here, it makes for a more meaningful experience than those who may have only played a few hours on a different console. The DualSense makes Sable feel more immersive and intuitive than ever before. It is a shame that the framerate is still a disaster, even with the vaunted computing power of the PlayStation 5. While the game looks absolutely stunning at any given moment, it often chugs and stutters in motion. Some players may not be bothered by a dropped frame or a hitched screen now and again, but it is noticeable to the point of distraction on the PlayStation 5. Mileage may vary on how this impacts the overall experience but it is an undeniable black mark for an otherwise peerless port.

Sable is contemplative, heartfelt, and filled with the boundless enthusiasm of its protagonist. The map may not be as sprawling as Horizon Forbidden West or as dense with secrets as Elden Ring, and objectives may seem comparatively limited to other games of its type. But Sable‘s greatest triumph lies in sparking the player’s imagination. Sable constantly generates a sense of wonder, as players scale the spines of desiccated dragon skeletons to reach a cartographer’s balloon or solve a mysterious puzzle involving a gigantic three-dimensional astrolabe. Through it all, the DualSense rumbles and chirps, helping the player feel like a Machinist as they learn what different types of feedback indicate. Sable is free of both bombast and pretention, and gives players a chance to look inside themselves to decide who they want to be.

Sable is available on the PlayStation 5, the Xbox series of consoles, and Windows.