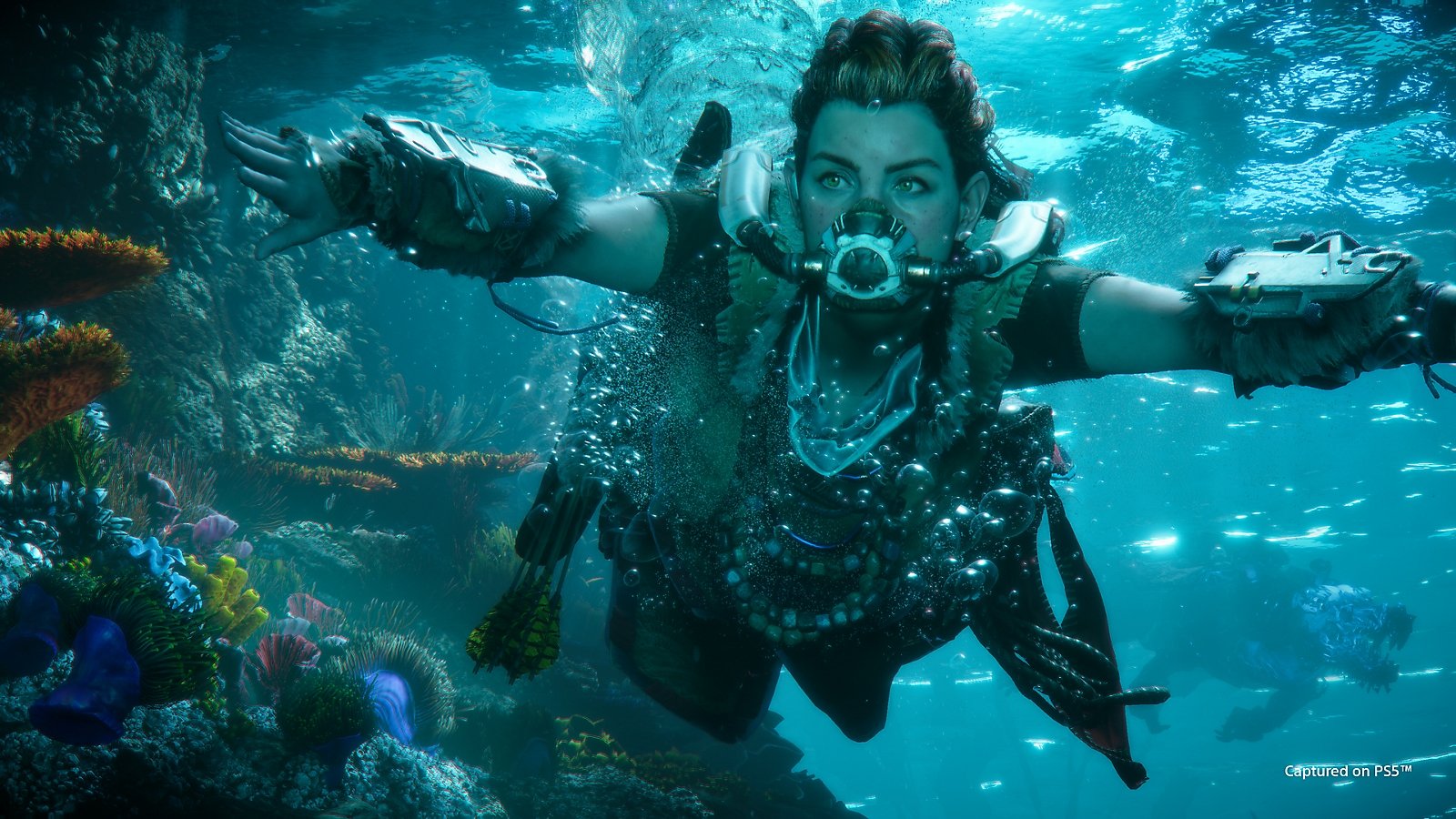 What defines a modern open world game? The generalities are clear: a large map, peppered with sidequests, NPCs, and scattered collectibles. Often, there are tall points of focus that, if scaled, provide the player with valuable information. The journey is just as important as the destination, as a map can be beautifully rendered but a slog to traverse. Open worlds have been evolving since the inception of video games, but Horizon Forbidden West, the latest entry in the Horizon series from Dutch studio Guerilla Games, stunningly refines contemporary open world models into something addictively fun.

Horizon Zero Dawn had the misfortune of releasing nearly alongside one of the greatest games of its generation (and possibly of all time) but still managed to carve out an identity for itself among its open world peers with its excellent combat mechanics and surprisingly in-depth and heartfelt story. But Zero Dawn‘s open world left much to be desired in many respects. Despite great art direction and atmosphere, Guerilla Games stuck to the already-tired-in-2017 Ubisoft model of open world design. The map was rife with question marks, but the answers were often not worth the effort of a player’s investigation. In the five years since Zero Dawn, Guerilla Games has made an effort to make the open world in Horizon Forbidden West not only more fulfilling to explore but more engaging to traverse.

In Zero Dawn, the Colorado and Utah-inspired landscape had countless mountains to climb. However, Aloy could only ascend specific, highlighted areas, or else risk sliding down rocky terrain. Forbidden West does its best to correct this, giving players far more freedom to climb than in the first game. Through a simple tap of her Focus, Aloy can pulse-scan the surrounding area and instantly determine what surfaces around her are climbable. There are still clashing yellow outlines to indicate what can be grabbed, and a big, red “X” on everything that cannot, but being able to quickly locate a path to clamber up is invaluable. Players even have options in their settings how obvious they want these indicators to be, a level of freedom that will hopefully be further smoothed out in the inevitable sequel.

This system is still a far cry from the unparalleled freedom of The Legend of Zelda: Breath of the Wild where players could climb literally anything (provided they had the stamina and weren’t being rained on), but it is absolutely a step in the right direction. Aloy’s climbing animations are subtly one of the most impressive parts of an unbelievably impressive game. She even puts Nathan Drake to shame. But Forbidden West acknowledges that watching an avatar slowly climb around the outside of a setpiece landmark isn’t always the most fun thing to actually play, and so within the first few minutes of playing, gifts players another traversal tool: the Pullcaster.

Aloy’s Pullcaster feels like a natural extension of her toolset. It operates in two capacities: it allows her to rip open closed vents, and to zip up to otherwise out-of-reach handholds. Once players adapt to its somewhat clunky control scheme, it starts to feel revelatory. The Pullcaster is more than just an exploration tool, as players can whip it out during combat to escape from a dicey situation or give themselves the high ground. Dropping a smoke bomb and grappling to a nearby ridge and pulling off a headshot on a befuddled human enemy is one of 2022’s great joys. Aloy may not be Batman, but she’s getting close. A grappling hook is almost always an excellent addition to a game.

But the Pullcaster is nothing compared to one of Forbidden West‘s most anticipated features: a glider. It may feel derivative aesthetically of Link’s tool in Breath of the Wild, but the implementation of the Shieldwing Glider into Aloy’s world is spot-on. Overriding a Tallneck and then leaping off its head to glide down to the next valley of mechanical monsters never stops feeling special. Players won’t use the glider to solve the same types of puzzles that they were in Zelda, but they also won’t be stressed about running out of stamina as they drift down a mountainside.

In Zero Dawn, Aloy moved from point to point on foot, or on the back of a robot quadruped. Forbidden West brings those features back, and does players one better: there is a flying mount the Sunwing, that appears late-game that completely changes how players approach the world. Freedom to fly over such jaw-dropping landscapes brings a jolt of freshness to the proceedings. The Sunwing doesn’t appear for some time but feels like a worthy reward for players who have spent dozens of hours crossing back and forth across the map.

Forbidden West doesn’t give out all its best toys at once, instead carefully doling them out to the player one at a time. It’s entirely possible to not even see the glider for the first several hours of playtime, as it is tied to Aloy finally moving past the large opening area. But the new movement options make exploration much more engaging than in Zero Dawn and signal a developer willing to experiment.

Of course, even if moving through an open world feels great, there must be something to move towards. Horizon Zero Dawn‘s side quests and errands were frequently uneven. While Forbidden West still suffers from this to an extent, the general quality of activities is much improved.

Collectibles in Zero Dawn were not always fulfilling to find, as they were simply marked on map after purchasing their location from a trader. Forbidden West‘s collectibles feel more directed. Finding a drone in the wild feels exciting, and figuring out the best way to bring it down to earth and extract its data is rewarding. The metal flowers and Banuk figures in Zero Dawn simply felt like collectibles for the sake of collectibles.

Forbidden West still has errands that don’t feel particularly urgent, but they at least impact other mechanics. Gathering ingredients for an in-game recipe will never be as exciting as battling and defeating a Slitherfang, but the breaks from combat establish a comfortable rhythm. It’s the same with Salvage Contracts, a new subset of side quests where Aloy engages with opportunistic scrap metal traders to create better equipment for herself. Errands like these have obvious benefits to the player by providing useful rewards, instead of just a loot box of easily-found collectibles.

Forbidden West is at its best when its excellent new movements options brush up against its optional content. This game’s environmental puzzles are much stronger than that of its predecessor, and players who take the time to scan environments, grapple up to hard-to-reach areas, and glide to distant platforms will be rewarded with excellent, meaningful lore and breathtaking vistas.

What does the future of open world games look like? There are limitless possibilities. Elden Ring will undoubtedly have its own influential take, and Sony continues to experiment with the concept with big-budget titles like The Last of Us Part II. It feels like Horizon Forbidden West has optimized what this kind of open world can be. The map is still large and awe-inspiring, but manageable to travel across. There are still a gob-smacking amount of side quests, but they mostly feel rewarding to complete. Balance has been struck between providing players direct paths to the next goal while still enticing them off to the side for enjoyable distractions.

Players who are a fan of this style of game will be enthralled with Horizon Forbidden West. It is perhaps the best example of how to create an open world map that feels simultaneously expansive and lean. By giving players tools to explore efficiently, they always feel like they are progressing. It is little wonder Horizon Forbidden West is receiving its share of praise.