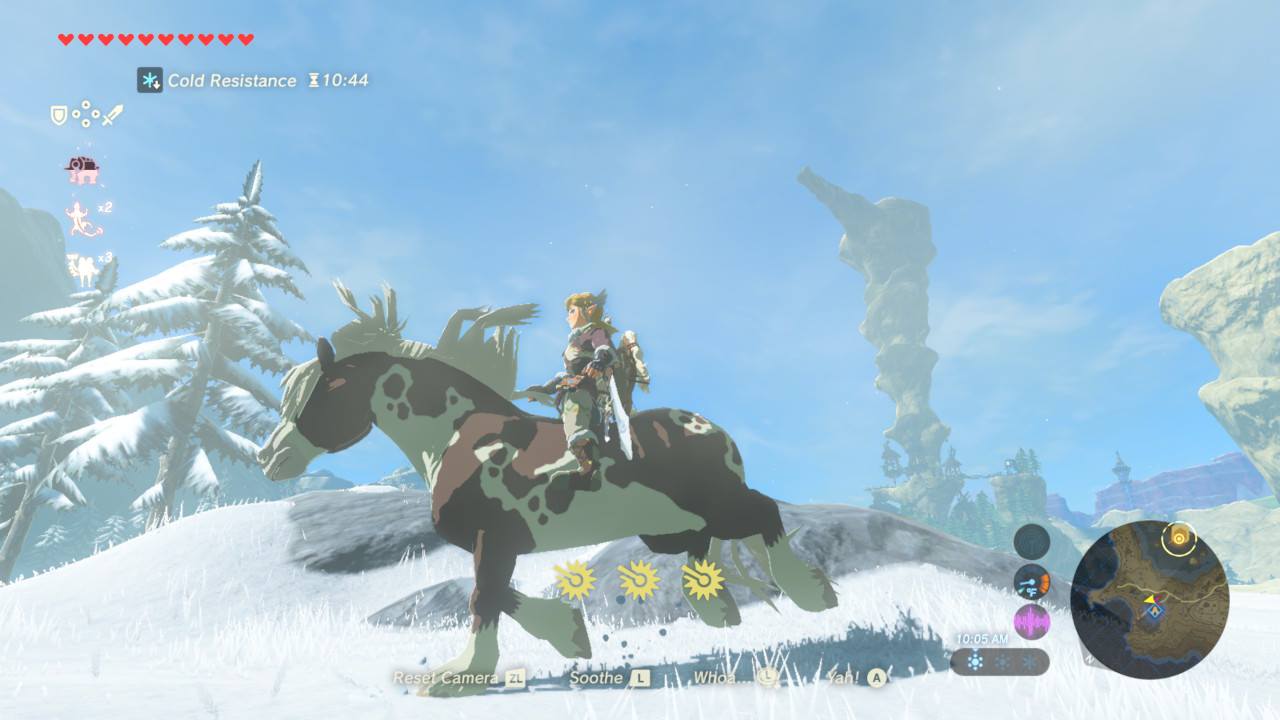 The Legend of Zelda: Breath of the Wild Review

The Legend of Zelda: Breath of the Wild is a masterclass in open-world design. With its release comes a true watershed moment in gaming history. The result is nothing less than magical. It artfully blends the best bits of the franchise’s thirty-plus-year history and produces a sandbox so full of mystery and so full of adventure, it took me well over 250 hours to uncover most of its secrets.

What we have here is the most ambitious title in the history of the franchise; an epic journey that quivers with anticipation, wonder, surprise and excitement. It never gets old. It never gets tiring. There’s not a minute that goes by in which you’ll want to put down the controller because Breath of the Wild keeps players constantly curious and fascinated by the world around them. There’s truly something unusually haunting, and engrossing about the game and whatever your opinion on the Nintendo Switch, Breath of the Wild is arguably one of the greatest games ever made.

What’s perhaps most remarkable about The Legend of Zelda: Breath of the Wild is just how familiar yet simultaneously refreshing it feels. Breath of the Wild may be the biggest Zelda game to date, but it still feels like a Zelda adventure — in spirit, story, tone and in gameplay. You play as the young courageous Link, the hero of Hyrule, awaken from a cryogenic sleep chamber inside of a small cave who teams up with the eponymous princess (so to speak) and sets out on an adventure to destroy the horrible fanged, boar-faced Calamity Ganon, a megalomaniac holding Princess Zelda hostage and bent on destroying Hyrule. The narrative setup is more or less standard for a Zelda game, but Breath of the Wild has something that was missing from the series for far too long — perhaps since the original title was released back in 1986…

Perhaps the greatest calling for the original NES title lies in how the game unfolds. It’s clear from the moment it starts that the game won’t be holding your hand. That is to say, the game provides no direction, and players can choose to explore Hyrule in whatever way they want. The Legend of Zelda introduced an open world adventure to gamers across the globe before that term had any meaning and that open world feeling is really what made the original Zelda stand out. It conjured the illusion that you could explore a boundless world and let your imagination do most of the work and those that enjoyed exploration in its purest form couldn’t find a better experience on the Nintendo Entertainment System.

Much like that original, The Legend of Zelda: Breath of the Wild is a game that begs you to keep exploring and it does this right from the start, immediately instilling a real sense of mystery, no matter how familiar you are with the series. This time around, Nintendo wisely skips over the prolonged prologue that usually includes tiresome tutorials and laying out the plot we all know so well. As soon as you emerge from that opening cave, you’ll find yourself on a vista, looking out at the beautiful mountains and ruins of a post-apocalyptic, techno-plagued world. And from that moment on, the world is your oyster. What elevates Breath of Wild above any other game in the series is its sheer freedom, both in its non-linear structure and in your ability to reach almost any surface. Breath of the Wild isn’t interested in telling you where to go. In fact, it rarely gives you explicit directions as to what to do. Instead, much like the original Zelda, it dares you to probe and gives players the ability to decide in what order they complete each mission. Where most recent Zelda games have become bogged down with needless hand-holding, Breath of the Wild lets players do what they want, how they want, when they want. There are numerous ways to defeat certain enemies, various ways to solve the hundreds of puzzles you come across, and countless combinations when forging weapons or cooking food. If you’re one to criticize past Zelda adventures for being too formulaic, you’re in for a surprise because Breath of the Wild doesn’t abide by a rigid structure. It is far more open and natural than its predecessors, letting you discover everything on your own. I wouldn’t say it changes the Zelda formula in dramatic ways since this isn’t the first time Zelda has tried to go non-linear, but Breath of the Wild brings with it a massive change in design philosophy and expands on virtually everything we’ve come to expect in a Zelda game.

Of course, having a massive open world wouldn’t have such an impact if there isn’t much to do in it, but the possibilities in Breath of the Wild seem endless. Breath of the Wild is a haunting, beautiful game and one that holds your attention throughout, despite its length and its cookie-cutter plot. Not only has Nintendo boldly and faithfully brought Hyrule to life in innovative new ways, but they’ve also created the most epic and sweeping fantasy adventure in the history of the company. It isn’t a secret that Breath of the Wild features the biggest Hyrule Nintendo has ever created, in both breadth and depth but it’s also the most varied. Hyrule here, is vast, beautiful, and filled with a diverse set of locations (from long stretches of Hyrule fields to alpine mountains to active volcanoes and desert lands), and it constantly finds ways to pique your curiosity with mysterious landmarks, small villages and enemy camps seen in the distance. It’s safe to say, with Breath of the Wild, Nintendo has created the most thrilling installment in the beloved franchise yet.

Breath of the Wild’s world is bursting at the seams and exploration is the heart of what makes this action-adventure game truly special. Scene after scene, Breath of the Wild unleashes so much wonder and visual imagination that you end up watching the game unfold in a state of rapturous, awestruck bliss. Like many open-world games it delivers on the promise that if you can see something out in the distance, you should eventually be able to reach it. In addition to traveling by foot, horseback, and fast travel, Link can also ride any animal given they are tamed and with the DLC, Link was even given a motorcycle to ride. But the biggest game-changing feature is allowing Link the ability to climb nearly every surface you come across provided it isn’t raining. In any other Zelda game, those mountains and ruins would simply be part of the scenery but as you explore Breath of the Wild’s massive version of Hyrule, you’ll never reach a cul-de-sac because there’s always a way around it. Instead of a roadblock, walls, buildings, and mountains provide another potential path to wherever it is you want to go. It’s a fundamental shift for the series and why Nintendo purposely tasks you with finding and climbing various towers spread out across each region, and in the process revealing to players, a portion of the map. The sheer scale of the world not only means you can discover interesting side-quests and lore in the most unexpected of places but gazing over Hyrule from way up-high, allows you to spot beaten paths, roads, structures, and villages that you may not have otherwise seen.

It helps that the landscape is absolutely beautiful. Anyone who relishes seeing the reach and scope of the series redefined will adore this marvelously accomplished game. Through Studio Ghibli-like animation, Breath of the Wild’s anime-inspired art style is full of bewitching images and brimming with painstaking attention to detail. And don’t let anyone tell you otherwise. There is no denying the game’s visual imagination, from the awe-inspiring creature creations to the stunning forest landscapes to the sensitive human-like characterizations. Breath of the Wild is dazzling and simply gorgeous to say the least. It also happens to feature some of the best music the series has ever had, and, for the first time in a Zelda game, voice acting is included as well. The sound mixing and sound design is a real high-point in this title. Just the opening voiceover alone can send chills down your spine, and composer Manaka Kataoka’s restrained, often poignant musical compositions are a tour de force of complementary minimalism.

Since its arrival in 1986, the Zelda series has always pushed the technical boundaries of whatever console it has graced and Breath of the Wild continues this tradition (times two). Epic, mythic, simply terrific, Breath of the Wild brought a new kind of experience to fans across the globe. In return, it demands your attention. It’s a landmark in video games that labeling it a masterpiece almost seems inevitable. Though in the end, most of what makes Breath of the Wild so beloved is Nintendo’s determination to constantly challenge themselves while crafting an unforgettable experience that also doubles as a commentary on the freedom of playing on the Switch. That a game of this magnitude can be playable anywhere you go, is a remarkable feat.

To say The Legend of Zelda: Breath of the Wild is a game for our time, perhaps for all time, mostly a good time and definitely a long time – is not speaking hyperbolically. It is that good. If there’s a better game out there released on a Nintendo system, I haven’t yet played it.