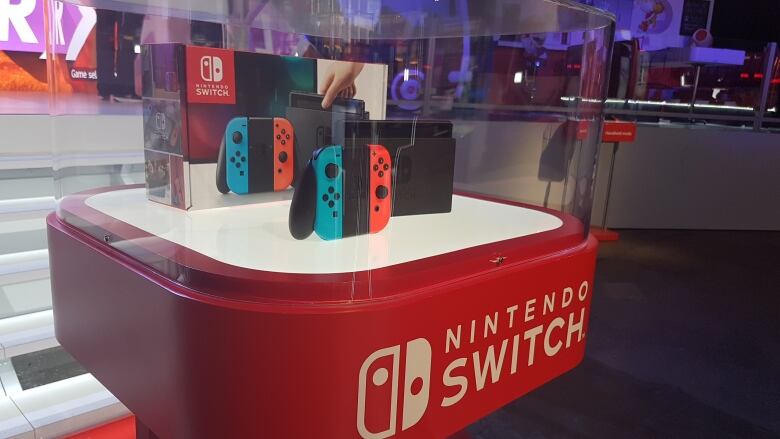 Nintendo is promoting the Switch, its next gaming console, across North America this month, and one of those events was held at the Metro Toronto Convention Centre in Toronto this past weekend where I got a chance to get a hands-on preview of the device.

Unveiled in October, the Nintendo Switch hits stores on March 3 and will replace the underperforming Wii U, which sold roughly 14 million units and failed to attract many third-party developers. While Sony, Microsoft, and other competitors seem intent on focusing on 4K resolution, virtual reality, and the “future” of video games, the iconic gaming company has something else in store for fans. The Switch, you see, fulfills a longtime childhood dream for many fans of the Big N who’ve always wanted a chance to play Nintendo’s biggest titles on the go. Nintendo’s newest video game console is a hybrid of its traditional home and handheld markets, and has inherited DNA from each of the hardware systems Nintendo has released in the past, incorporating the X, Y, L, and R buttons from the Super NES, the analog stick and the rumbling controller via the N64,  the maneuverability of the Gamecube, the touchscreen ala the Nintendo DS, motion controls similar to the Wii, and of course, the idea of taking your games on the go, much like the Gameboy. Nintendo’s Switch is a compelling proposition for sure, but a lot is riding on the device. While still enjoying relative success in the handheld market, the veteran game company is really hoping the Switch can find similar success to the Wii, which sold well over 100 million units in its lifetime. I walked into the event ready to be disappointed, and to my surprise, I was pleasantly satisfied with the overall experience.

The Nintendo Switch is an impressive piece of hardware and a leap over the aging 3DS and DS lines. At the core of the Switch is a sexy tablet with a 6.2-inch LCD screen running at 720p resolution  (1080p on your television set when docked) with 5.1 audio output offered. Under the hood, you’ll find a custom Nvidia Tegra processor, reminiscent of the Tegra X1 found in an Nvidia Shield TV. The screen itself is substantially brighter and more vibrant than its predecessor, the Wii U’s stout GamePad, and while some smartphones pack more pixels, none can match the sheer screen real estate of the Switch. It’s sharp, vibrant, comfortable, and seems able to keep up with the breakneck pace of every game I tried. There was no way to get a feel of just how heavy it is, as every unit was locked down, but sources tell me it weighs approximately 297g (398g with Joy-Con controllers attached). To put that in perspective, it weighs a bit more than the Wii U Gamepad and the 3DS combined. The joysticks and shoulder buttons on the Joy-Con do make it a little thicker than your average tablet. It certainly isn’t going to fit in anybody’s pocket, and I can’t imagine a child being able to hold it for very long without getting tired, much less to navigate his or her small fingers across the many buttons laid out. Thankfully, Nintendo has created a system that can be played in three different ways, including a tabletop Mode via its built-in kickstand.

The Switch is an undeniably a well-designed, flexible piece of hardware, and after years spent carrying Nintendo portables that look like a poor man’s laptop, the Switch is a breath of fresh air. Nintendo has a reputation for building hardware that rarely breaks down on consumers, and the Switch seems no different. Simply put, the Switch feels sturdy. I was tempted to drop the device just to see if it would keep working (that said, I would highly recommend getting some sort of a screen protector). Switching between the TV and the portable is as seamless as can be; when you pull the Switch out of its dock, your game will appear on the portable instantly. As for handheld to TV mode, it took about two to three seconds for the video to appear, most likely due to the TV’s ability to register the incoming signal rather than the Switch itself. Given the system’s hybrid nature, battery life for on-the-go play is, of course, a concern. According to Nintendo, the Switch’s portable battery life will range from two-and-a-half hours up to six hours depending on the graphics requirements of the game being played. The console at least charges via USB-C, as opposed to the proprietary charging methods of Nintendo’s past. Meanwhile, up to eight Nintendo Switch consoles can link up for local multiplayer play, and when I used it to play both Splatoon and Mario Kart Deluxe there wasn’t any evidence of graphical latency or low rendering speeds.

Is the Switch Worth Buying?

Putting aside the controllers and the software, which I will be writing about next, the question I keep getting asked is if the system is worth buying. If you are a fan of first-party Nintendo games and/or, you’re looking for a portable system, and/or you want a console that supports the best multiplayer and couch co-op games, the Nintendo Switch is definitely worth investing in. As things stand, Nintendo has created an inventive console that focuses on showcasing the company’s ingenuity and technical prowess over and above matching the graphical horsepower of its competition. At a time when Microsoft and Sony are racing each other to provide as much graphical power possible through the PS4 Pro and Scorpio, Nintendo understands they are already too far behind in the race to catch up, so they’ve instead focused on what they do best: making games fun to play with your friends and family. I know Nintendo is selling this first and foremost as a home console, but I think that is actually a mistake. The selling point, aside from the library of first-party games, will be the portability of the Switch. The line-up of software is slim at the moment, but the games will come, and from what little I’ve played so far, I can tell you that games such as Snipperclips, Splatoon 2, Has Been Heroes, Arms and Super BomberMan R will provide you hours upon hours of entertainment while you wait around for more games to be released. Simply put, the Nintendo Switch is the greatest portable video game system made so far, but it does have one thing going against it and that is the cost.

Nintendo can always count on a good ten million fans to hand over their hard-earned money for whatever new piece of hardware they release, but getting beyond that number is something they desperately need. The Wii was a massive success for many reasons, one of those being the price tag. The Wii retailed in North and South America for $249.99 and came packaged with one Wii remote, one nunchuck attachment, an AC adapter, an audio/video cable, a sensor bar, sensor bar stand, a Wii console stand, and two batteries. The package also came bundled with a copy of Wii Sports. The Switch, on the other hand, is launching for $299.99. It comes with a pair of Joy-Con controllers and a docking station, but there’s no game bundled with it. The Switch also only comes with just 32 GB of built-in storage, and the console reserves an unknown portion of that flash memory for system use. If you want to buy a digital copy of The Legend of Zelda: Breath of the Wild, you’ll use up 41.9 percent of the total storage, and while the Switch will accept SD cards up to 2 TB in size, 200 GB cards will cost you an additional $70. While each Joy-Con functions as its own controller, the majority of the Switch games so far focus on even larger multiplayer fun (up to eight players), and a second set of controllers – which I believe is a must – will cost you $79.99 at launch (a Joy-Con can also be purchased separately, for $49.99 each).

Another problem is that while the Joy-Con does feel comfortable to hold, it pales in comparison to the Switch Pro Controller, which I assume most gamers will want to buy. At $69.99, it’s the most expensive traditional controller available for any console on the market today. But perhaps the most frustrating decision on the part of Nintendo, however, is to not include a Joy-Con Charging Grip with the bundle. When it comes to the Grip, Nintendo is selling it separately for $29.99. Keep in mind that these are all American prices. Here in Canada, the system itself costs $466 tax-in, again, not including a packaged game. And if that isn’t bad enough, the craziest decision Nintendo has announced was the price tag of an additional dock. It would make sense that given the portability of the Switch, consumers may want to invest in multiple docks in order to make it as simple as possible to move the console from one room of their home to another. The only problem is that the docks cost $90 each, and its only main function is to provide an output to the TV, as well as charging and providing power to the system. In other words, you can spend $90 for an additional dock, $70 for an SD card and $79 for an extra pair of Joy-Con controllers, a total of $160, or you can spend an extra $61 and buy a second Switch instead.

The Nintendo Switch is not a poor man’s console, but console gaming has never come cheap. I remember buying N64 games for $120 back in the day, which, accounting for inflation, is almost $150 today. The difference I must reiterate once again is that Nintendo is giving us something we can take anywhere as well as a console that encourages multiplayer fun. What at first seemed like a strained miscalculation turns out to be one of the most brilliant marketing ploys ever pulled by a multibillion-dollar entertainment conglomerate, selling consumers an underpowered, half-packaged console that was presumably rushed out to the market – and relying on convenience and nostalgia to win over the wallets of gamers worldwide. The Switch is a giddy blast of fresh air, an exercise in unfettered glee that leaves behind all the angst and self-seriousness of too many modern games to revel in just how freakin’ fun Nintendo can be. Yes, it is bloody expensive, but maybe this time around it’s worth every penny. Only time will tell.