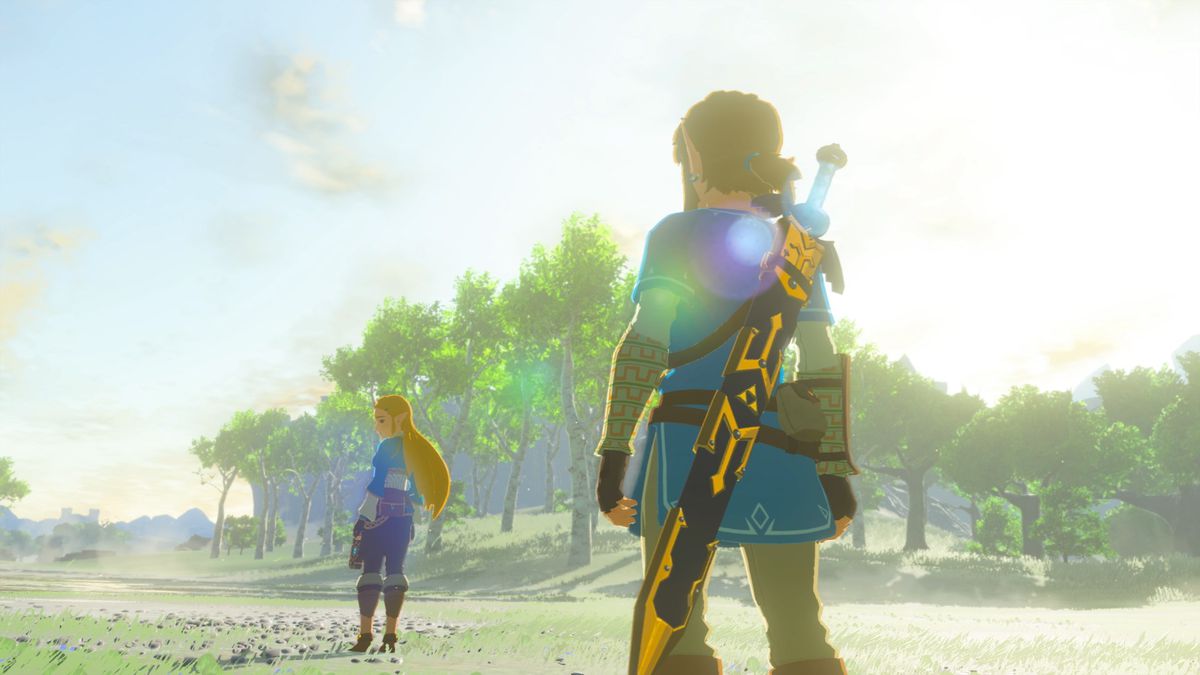 Is Breath of the Wild the Best Nintendo Game Ever?

To awaken in the apocalyptic world of what was once Hyrule is a surreal moment that was once unimaginable. Ganon was supposedly defeated, sealed away to never rise again. But the cunning always finds a way, and as such, The Legend of Zelda: Breath of the Wild begins with Link finding his feet again in the same, but a remarkably different world. That first step into the ‘wild’ of Hyrule, is the greatest leap Nintendo has ever made.

A surface of pure beauty hides the undertone of a powerless world, unable to cope with the darkness that beleaguers them. A charm that befits the elegance of a world reclaimed by nature, grudgingly bestows an adventure never witnessed before. The gorgeous regions are awash with life, carefully painted with not a blade of grass out of place. As the wind carries you from mountain to mountain, to the canyons and rivers, to the grasslands ridden by Epona before, there’s a realization that this journey is for you to decide.

The ability to interact with the world like no other Zelda game before is its greatest achievement. Breath of the Wild is nothing short of a survival game, using the resources at hand to fight a way through to every corner of the map. An evolution of sorts; as you grow, you change, but as you change, the game does too. That first stone you throw at a moblin may soon become a powerful bow that rains havoc from a distance, that stick you first pick up may soon become the legendary Master Sword herself. The rules are your own, and the heart of the game lies within the player.

The environment relinquishes your power to ease through without adversity. This is the toughest Zelda game so far, with new ways to win and lose all within the same battle. The rain will hinder your ability to climb the summits, the darkness will arise new friends and foes alike, the lightning will leave your iron sword your most fatal companion. How you traverse the world is one of the most critical aspects of the game, adapting cautiously but assertively at the same time.

A creative mind can utilize the world in ways never seen before in Zelda. Manipulate the world to work in a way that suits you. Throw a metal box into a camp of moblins during the height of a thunderstorm, and see how lightning can strike twice. Ride on the back of a stag and chase the rogue riders into submission. Craft your own weapons and cook your own potions to help you reach the ends of the world. There is no correct way to play, and the storyline itself can be tackled in your own unique way.

Shrines are a new addition to the Zelda series, best described as mini-challenges rather than dungeons. A series of challenges with the end reward of an orb, which can then be used to gain more heart containers or stamina. Such is the unique design of Breath of the Wild, the easiest shrines are by no means at the beginning, nor are the hardest shrines at the end. The easiest paths are those you can’t see, and going wildly off course is sometimes the most hopeful of adventures. Uncovering shrines can be a puzzle in itself, inspiring more diverse ways to conquer the world.

Without spoilers, the storyline itself can be an emotional whirlwind. A Link that can’t remember the people he once loved, must overcome his frailties and regain the strength he once had to defeat Ganon once and for all. The main dungeons themselves aren’t the most memorable Zelda dungeons, and they certainly aren’t the most challenging. The final bosses may provide a great challenge, but getting to them is merely puzzle-solving rather than defeating challenging foes. That said, the greatest dungeon will always be the open world, and that’s clearly the biggest focus in Breath of the Wild.

Whichever way you take your journey, Breath of the Wild is a masterpiece. Strikingly beautiful, elegantly bewitching, and cunningly dangerous. The world has a personality of its own, and your foes even seem to have the ability to plan ahead of you. Engage head on at your own peril, Breath of the Wild requires a lot more brain before brawl and a devious mind aids you well.

The motion controls can become a little tricky, and certainly take some getting used to. They’re required in many of the shrine puzzles, and your ability on the bow will be defined by your ability to adapt to the motion control. Honestly, it can be frustrating to use, but at the same time, it’s been used brilliantly to give another piece of gameplay rarely seen anywhere else. Once you’re comfortable, picking out moblins with the bow can be a quick, conscious task; Nintendo would do well to utilize the motion controls in similar ways in their future games.

There is occasional framerate lag, notably when the Nintendo Switch is in TV mode. The handheld mode works comfortably, and lag is merely an occasional blip to an otherwise perfect game. It doesn’t affect the enjoyment value, any lag lasting a second or so before rendering back to a normal state. Such things aren’t uncommon anymore, therefore, it’s nothing to be too troubled by. Overall, the performance is of a good quality. Playing in handheld mode would solve most of the issues if there are any that hinder the performance too greatly to become unusable.

This has been Nintendo’s most ambitious project and small blips can be expected. This is certainly the most beautiful game Nintendo has ever made, and quite frankly, this is the best game Nintendo has ever made. It’s utterly stunning, it’s intriguingly mystifying, and at times, ferociously intense. If you had reserved buying the Nintendo Switch, this is the greatest reason to invest in a console that has been positively surprising. To not play The Legend of Zelda: Breath of the Wild is to not play one of the best games of all time.