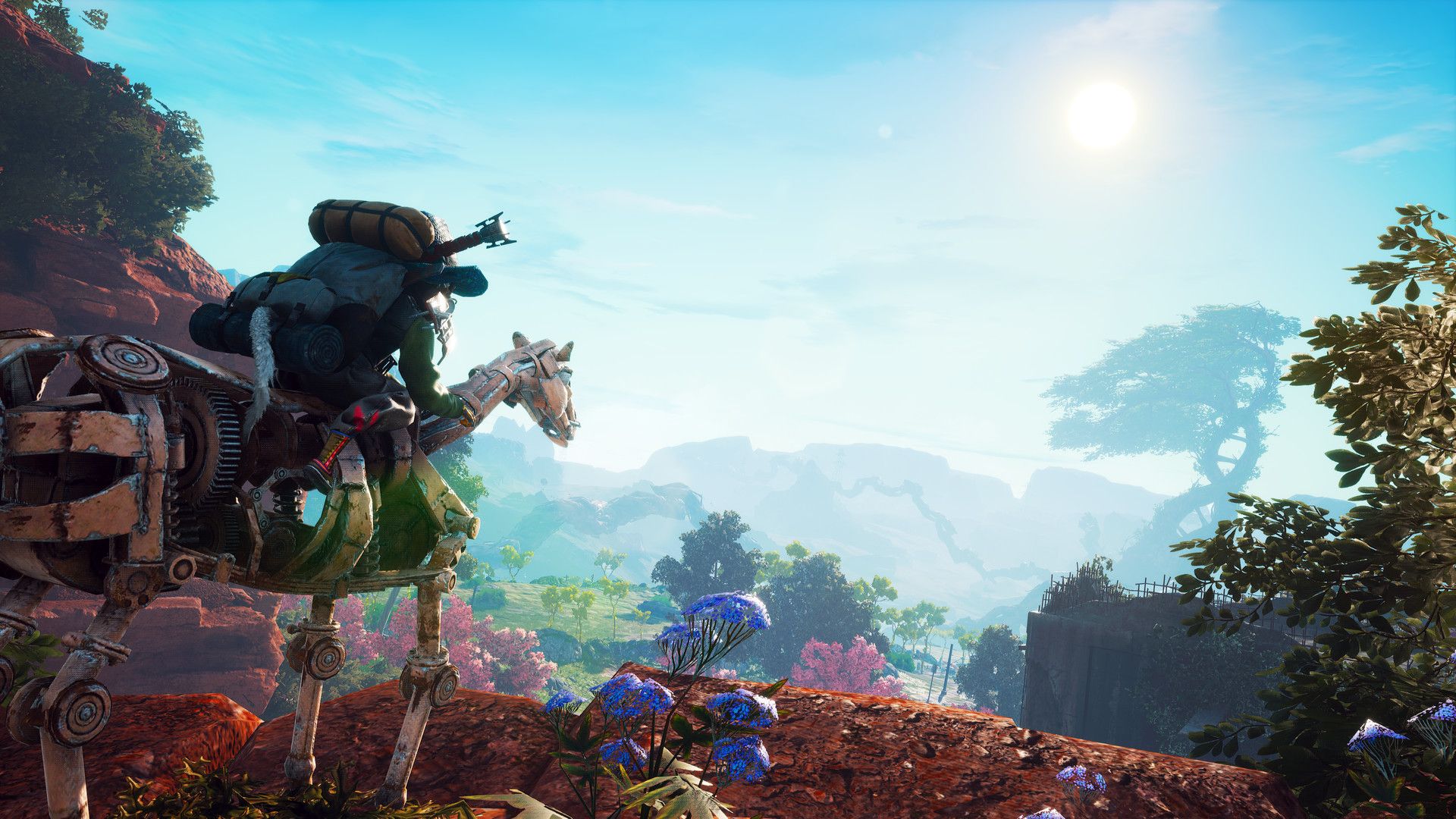 “Biomutant is an open-world post-apocalyptic kung-fu fable. Basically, in terms of structure, it’s like The Legend of Zelda: Breath of the Wild I guess, but the feedback that we have been getting over the years is that it’s a strange weird good mix between Ratchet & Clank, Devil May Cry, Batman Arkham, yeah and a couple of other influences. So its truly an open world game, 8 by 8 kilometers filled with a lot of weird events and fun things to find.”

Prior to Biomutant’s launch, Art and Creative Director Stefan Ljungqvist made some peculiar comments concerning what exactly Experiment 101’s first upcoming title was all about. The ex-Just Cause developers have been working hard since 2015 to bring a brand new open world action role-playing game to the spotlight that would take the team and adopters of the project “back to their gaming roots” — or so they claimed. However, watching Ljungqvist explain what his latest project was at its core before launch should have been an indicator of concern for Biomutant’s detrimental structure above its foundation. His words were a red flag, a calm before a mixed storm that would brew upon the horizon.

The quote in question, coming from a video published by THQ Nordic called the “Explanation Trailer,” was a simple enough teaser intended to showcase the beautiful open world Biomutant has to offer. What Ljungqvist does, however, is flaunt a message in the opening of his overview that sounds likable but is as messy as the genetic structure of his leading mutated cast of characters. Biomutant was a clear hodgepodge of inspirations with no actual goal as it began to tackle creating its own open world game that was incomparable to those demanding predecessors. As the game sits on extremely mixed review scores on Metacritic, it is not surprising to say that creating a vast open world with too many inspirations in mind is what ultimately led to Biomutant’s inevitable downfall. Biomutant is trying to do far too much but executes very little.

Biomutant is not a horrible broken mess, but behind its solid frame rate, fluid controls, and beautiful landscape is a world with an eye-candy look but no real substance. The game’s environment is an open world for the sake of being one. Experiment 101’s title certainly takes plenty of notes from Middle-earth: Shadows of Mordor, The Legend of Zelda: Breath of the Wild, the Batman Arkham games, and everything its developers claimed inspired it up until its release. However, where Biomutant fails most is in creating a landscape that is actually engaging in terms of interactivity that those huge aforementioned titles had in their settings. Biomutant fails to create a world as embracive as its inspirations. Its incomplete and barren wasteland is ironically the source of many of its key problems, whether you are looking at the story’s overall pacing due to objective placement, lack of satisfying incentives for completing tasks, or even keeping the player’s interest in check.

Biomutant’s world has an activity problem at its core that does not reflect the number of legitimately satisfying objectives to complete as in, say, Breath of the Wild or Shadows of Mordor — just to name two examples — but worst of all, its landscape is unnecessarily large. While Ljungqvist may compare the game to Breath of the Wild for its structure and “sense of freedom”, Biomutant plays more closely to something akin to the first Assassins Creed trilogy or the Far Cry series. Any open world game developed by Ubisoft fits the bill as a perfect comparison. These are open world games that play out with a sense of limitation to them. Ubisoft’s titles live by a linear point A to B structure of design where players are expected to complete a specific story quest to move on to the next — and Biomutant does the same.

Despite this restriction, Ubisoft manages to still offer players plenty of freedom in their titles. There are always several minor objectives to seek out aside from their core narrative, but they are never typically tasks that are far apart from one another or do not share an impact on the player’s progression. While there are inherent flaws to Ubisoft’s approach to open world game design, such as the fact that there are several copy-and-pasted missions or the fact that rewards can get far too similar, whether you are playing The Divison 2 or Far Cry Primal, there are undoubtedly a variety of things to do in-between missions that are close in proximity — in turn, this makes the world feel smaller and that is precisely what Biomutant‘s world lacks.

Looking at The Division 2, for example, the game’s main location of Washington D.C. is a massive area packed with more than one empty road, but at the very least there are always collectibles or enemies to fight at every other block. The Division 2 does certainly have a chunk of wasted space, but not enough to be able to run across the map without accidentally stepping into danger or an interesting location worth perusing. Getting from one area to another in that specific title is not as simple as holding the analog stick forward as players will constantly be required to sneak around enemies or engage in heavy firefights on a well-paced basis.

Compared to any of Ubisoft’s open world titles, there is a complete lack of incentive or thrill to exploring every location surrounding the Tree of Life in Biomutant. That is not just because there is a lack of things to interact with or rewards to gain, though. The amount of time it takes to get from one place to another is far too high. Half the time exploring Biomutant’s world players will have no sense of actual progression as they travel from point A to B over and over again for the sake of wasting time. It is not like Breath of the Wild where you will discover Korok seeds, climb towers, find new items, scan animals for your index, and explore places of interest on different paths.

There are precious few enemies or meaningful locations with actual objectives to find and conquer like what you have in The Division 2 or Shadows of Mordor — or once again, even Breath of the Wild, which would urge the player to explore areas more thoroughly. Biomutant provides players with no reasons to go off their course and make their own escapades because the map is empty the vast majority of the time. There is nothing to do in Biomutant’s world besides hit item boxes filled with craftables that can be found anywhere. There is no weight to this incentive as you are always gaining materials, unlocking abilities, and leveling up while on the main quest.

Even when there is an incentive for exploration in Biomutant, the results are inadequate. Biomutant relies on the same formula for discovering its map, being that there is a slew of forts to conquer in each region outside of its distant placements of collectibles in the open world. As you explore each region to find outposts and overthrow tribal leaders, you are given the same exact list of tasks to complete. You go to a fort, break down the door, fight some enemies, and claim your conquest as complete. Afterward, when the enemies are cleared out, you can talk to citizens who all have literally the same dialogue, trade items that can be found at almost any other outposts, and gain a little bit of material used to make some character ability upgrades — all meandering tasks done in the wilds, but now in one compact area. Some forts have a few different enemies here and there, but all of them are nearly identical in format and even visual structure — the lootable item placements for the majority of its inner locations are almost one-to-one copy replicas of each other.

Conquering territory is not at all similar to games like Shadows of Mordor (as the developers have used as a comparison), which featured a nemesis system and constant barrage of enemies to utilize. There is no secret conquest or constant threat of danger presented by Biomutant’s locations. If anything, they inevitably give the player less to do. By conquering enough forts, you are eventually given an option from a tribal leader to accept a surrender — not that you are surrendering, they are. If you accept their surrender, the entire quest to conquer the game’s open world is automatically completed on the spot and never acknowledged again. It’s almost as if the developers knew how tedious one of their main gameplay selling features was and decided to give players a way around it. Conquering forts leaves a barren world all the more empty as it subsequently deletes enemy threats. The player’s only incentive for finding the forts they did not conquer ends up being the will to do the same meandering tasks they normally would after taking down the boss – go around and gather more collectibles for upgrades.

All of these decisions result in the same key problem: Biomutant continues to offer less of a reason to explore a world that is growingly overwhelming. Not having or being able to find enemies to fight artificially increases the amount of time it will take to unlock your abilities earned through experience points and task completion. The amount of land to cross to get to each objective is too long and provides nothing noteworthy to venture off and see on the way there. Aside from taking in the view, there is no reason to adventure across a massive world other than the pure reason to get from one story objective to the next. Biomutant is so focused on attempting so many different ideas that its inspirations accomplished, yet it should have stayed keen on vitalizing at least one or two of its sources’ core mechanics that impact how the player or world naturally reacts to each other.

There are a system of camps to capture like in the Middle-earth and Batman Arkham titles, a series of different weapons to buy and build like in Ratchet & Clank, combat unlockables looking to live up to Devil May Cry, and an open world to explore with “unlimited” freedom like in Breath of the Wild. Inevitably, all of these games that have not much to do with one another outside of having large worlds to explore hold no way of fitting together. For such a lush and vibrant world with unique characters, Biomutant’s land has all the beauty yet no substance for any of its ideas to work with. It is locked in a dreadful cycle of the same tasks. Experiment 101 clearly dumped their budget into creating a world with some awe-inspiring set pieces, but with their foundation came no purpose. Biomutant’s world is ultimately something too big to traverse with no real reason to discover.