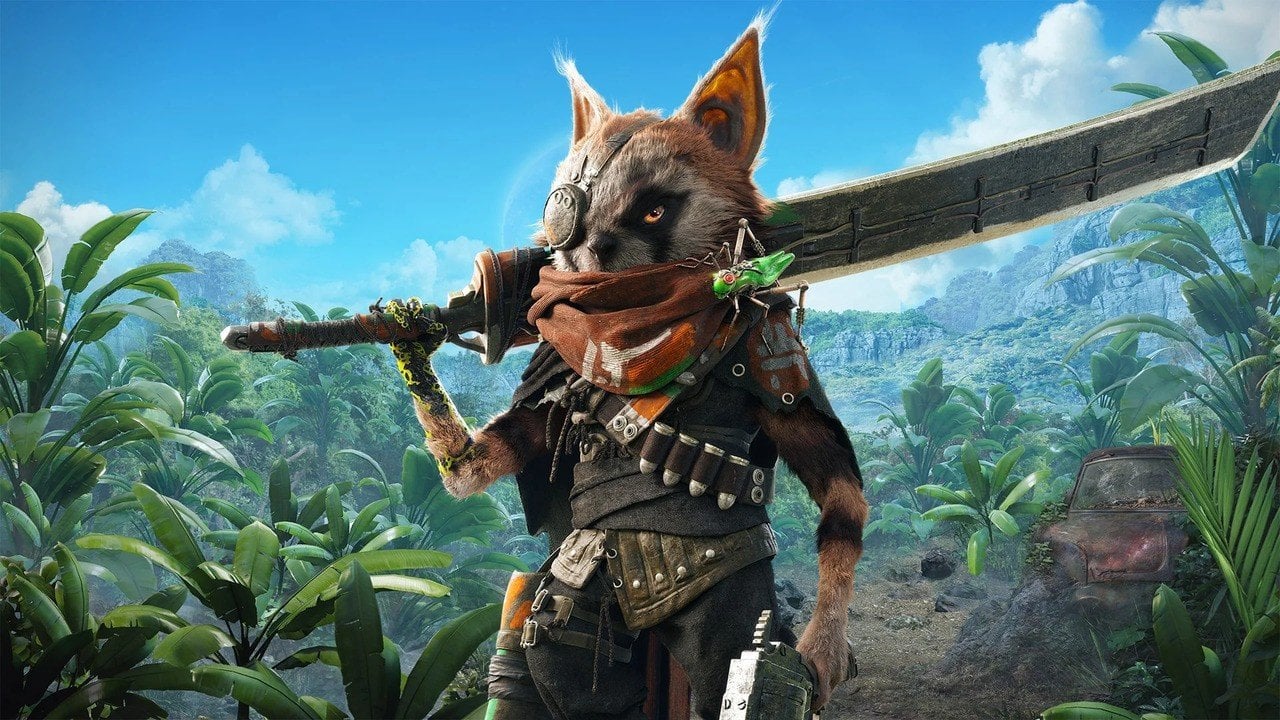 Since the summer of 2015, Experiment 101 gathered a group of Avalanch Studios employees to set out and create their next big knockout after working for years on the explosive Just Cause series. Seeking to embrace the roots of their game design philosophies and forge a brand new title for all audiences, Biomutant is an infected petri dish from an experiment that has not panned out the way it was originally intended. As it shows a lack of focus but high aspirations, the action role-playing title quickly dissolves into a tedium of tasks with heavily unbalanced gameplay. Biomutant needs a tighter grip on not only deciding what it wants to be, but it also could use a muzzle for its amount of talk and a skinner for its sheer size. It is by all means not awful, but Biomutant’s pleasures fall far short of the grand picture it attempts to capture. Like the creatures of its world, Biomutant is a hodgepodge of a mess.

Taking place in a post-post-apocalypse when humans self-selected themselves for extinction by a greed-driven agenda, Biomutant occurs in a world where animals have risen up to an anthropomorphic status as they attempt to gather weapons and structures left by the wanderers of the past. Foxes, rodents, and the like have all begun picking up guns, rockets, and swords as they wage war on one another for the single purpose of conquest. With another apocalypse brewing in the background of a poisoned earth, it is up to the player to decide how their destiny will arrive as they attempt to retain peace or join in on the action before the Tree of Life can die out and creation will once again fall into chaos. The main goal of Biomutant is to pick a path in life and defeat the World Eaters before life on earth can once again come crashing down.

After an animated opening movie and a delightful character creation screen that has your protagonist mutating based on chosen stats, Biomutant starts off with an effective first impression. Its action-packed opening monster fight followed by a short escape into a dark building comes with some minor flaws while getting its point across. It oddly is a playable version of that same opening movie players witnessed before the character creation screen came up, yet the beginning establishes almost all the basics players need to know about the game. Combat between close and ranged weapons, collecting items, puzzle-solving, and even light exploration are all introduced within the first half-hour. However, that positive first landing ever so slowly becomes a limp to the finish line as those who make it past the first mission and listen to some lore will discover that everything Biomutant practically has to offer was just shown.

Biomutant is definitely story-driven, but its narrative is nothing to write home about. It exemplifies the need to protect our planet and think resourcefully, but it does not contain any real characterization or story arcs outside of the protagonist’s yearning to defeat his mother and father’s killer. The ally and enemy character design is always nothing short of great, yet outside of looks they don’t have much to show — but perhaps that is also a recurring theme with the game. According to the developers, gameplay, and exploration have always been at the forefront of Biomutant‘s creation, yet even ignoring its story the title struggles across the board with everything it attempts to accomplish. From the gameplay to the presentation, Biomutant shows its footing but never runs forward in a specific direction; it has too many goals in mind.

Starting with the combat, Biomutant never plays dreadfully, but it does hiccup quite often. From weapons that feel no different from one another to powers that are unnecessary due to balancing issues with the first set of weapons you are given access to, the game always struggles to present a reason why you should switch up your playstyles or item choices. The hit detection and collision can be off with some creatures, yet the mechanics generally work fine and the player’s overall movement is actually quite fluid. The game clearly wants you to kill and collect everything you see, which is rather ironic considering it also bothers to introduce a system of morality that will eventually lead players to two different endings based on their deeds. You would think players would have the option to murder enemies in cold blood or spare them, yet Biomutant only gives you these options with key characters and occasionally collectible animals.

If there is one thing Biomutant gets right in terms of gameplay, it’s variety — at least for combat, that is, as the majority of it is simple “go from point A to B” linear missions and fetch quests. Outside of the puzzles that are quite literally the same color-coding enigmas printed over twenty times, between your physical and psychokinetic weapons, there’s a ton to upgrade in Biomutant. With level-up points and a select few collectibles that can be found in sludge-filled tankers and locations to pray at, there are a few unique categories the player character can maximize. The overabundance of upgrades is absolutely unnecessary but does give die-hard players an incentive for their work. Reaching every goal casually is a pipe dream only users who thoroughly explore the world will accomplish, though, as the land presents constant problems with collecting experience points.

In the same vein as Biomutant’s gameplay, the open-world both struggle and thrives the most as it showcases something beautiful and well-crafted yet barren and boring. Between the weak sound effects that make sword swings and fist strikes feel like punching pillows, the overabundance of annoying dialogue, and an empty world to waste time traversing, Biomutant constantly feels out of touch with its theme of the endurance it takes to yield a fruitful survival. Surviving in this world is too easy as there are rarely any obstacles to encounter along your journey.

On top of a world that always feels tamed, swinging weapons and defeating enemies never sounds audibly satisfying or weighty. Biomutant’s sound design is absolutely all over the place as its calm world is either silent or reusing the same few tunes to fill its dozen-hour campaign. Every sound effect regarding the actions you take simply comes off as too soft for the game’s tone as monster hunting and fighting visually plays out viciously but audibly sounds frail — and that includes even the narrator who is supposed to add drama to the story. David Shaw Parker does the best job he can at being the game’s storyteller, but the man is simply given too many lines. Even though he is the only speaker in a game packed with anthropomorphic animals, his constant usage of the same voice tone makes Biomutant seem like a documentary rather than an adventure.

Additionally, not only are you stuck listening to the same voice actor for every character that appears throughout the title, but it sounds as if he is never going to stop talking. The dialogue of Biomutant sways between being either painfully simplistic or too wordy for its own good. When it’s explaining basic themes of life it never feels impactful, an offense that’s even worse when the script is explaining itself as if it were complex. Biomutant does hold plenty of thought-provoking quotes, but nothing lands deep in the player’s mind because its most complicated ideas are being instantly explained after being spoken. The dialogue can often sound like the game’s writer is sitting next to you on your couch discussing everything going on.

Where Biomutant’s budget clearly went was its presentation; it takes place in a vibrant world that is downright beautiful. Like many other open-world games, there are times where you may just want to reach the peak of a mountain in Biomutant just to stare out at the distant horizon. It is clearly a world crammed with detail, but that same beautiful landscape upsettingly lacks any real tangibility and interactivity. Biomutant’s world is completely barren — worst than a Fallout wasteland. For a game about the post-apocalypse, you would think that there would be enemies to fight or NPCs to interact with here and there but there simply aren’t. This huge world has literally nothing to do in it outside of collecting items that have no weight and discovering new locations. The developers could have easily trimmed down the size of this world with how much space goes unused — and that’s not an understatement as the majority of the time you have to run from objective to objective with no interference outside of making a turn to get over a large wall.

Biomutant is attempting to do too much, but can not tackle enough. When it wants to build a beautiful world it is doing so. When it’s telling its story it is deep in the moment. When it’s getting crazy with its combat the gameplay becomes more thrilling. Biomutant has a solid foundation with barely any bugs considering its size, but it never makes a solid case for why players would want to explore its world, be invested in its characters, or continue fighting for the future.

From its reveal to its launch, Biomutant has always come off as a fascinating title with a lot of promise in terms of exploration and combat. However, the concerns surrounding the game’s launch continue to remain in the final build. Had the title aimed to be a smaller-scale story-driven action-packed adventure, it likely could have succeeded. A lush world and quirky character designs are nowhere near enough to save this experiment from hitting the recycle bin as it slowly becomes a tediously paced mess of the same actions being rinsed and repeated. Its bugless nature and solid framerate are commendable considering its sheer size, yet many of its perks make it feel all the more as if it were not a finished product. Perhaps several updates can fix its key problems of emptiness and lack of audible satisfaction, but as it stands Biomutant is stuck in a limbo of being a promising post-apocalyptic adventure that can never deliver. It may contain a notable foundation, but it is horrendously executed and a massive disappointment for fans who have been waiting for years.