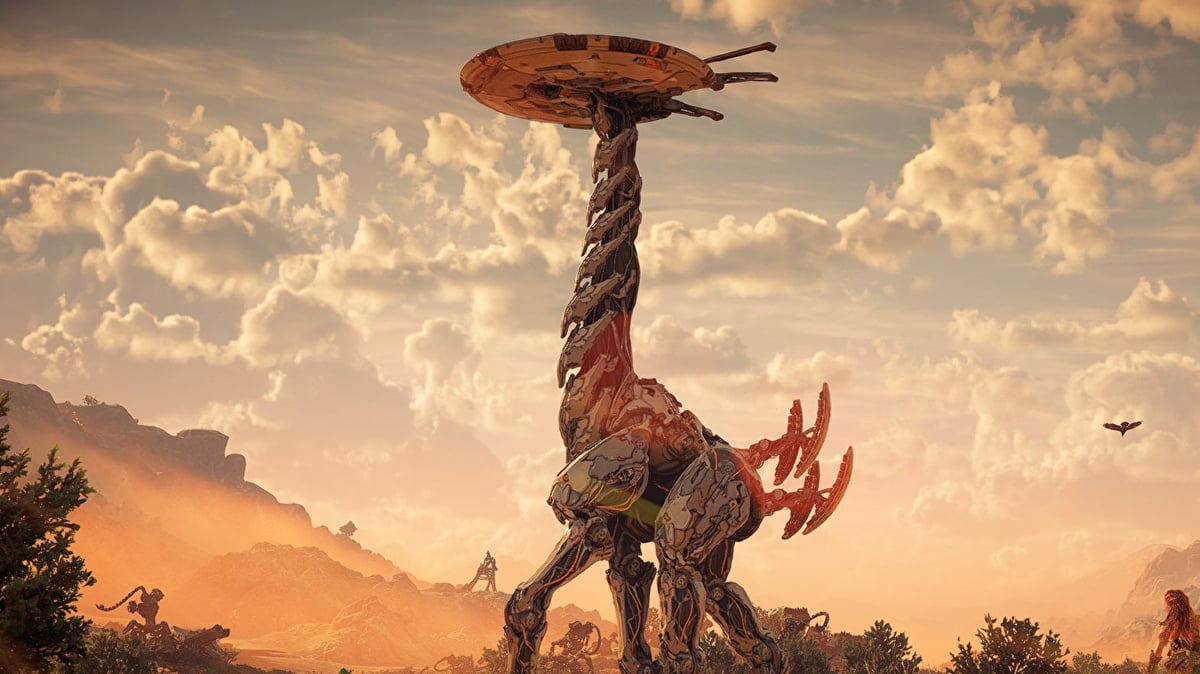 The iconic giraffe-like Communications Class machine is back in action and needs more overriding! With the release of Horizon Forbidden West on PlayStation 4, PlayStation 5, and Microsoft Windows, players will once again take Aloy to greater heights as they aim to conquer six Tallneck machines located throughout the west side of a post-apocalytpic America. While there may be only one more of the machine type to override in the new game, each Tallneck presents a far more difficult challenge than what Zero Dawn ever had to offer. From the Cinnabar Sands to The Shining Wastelands, this is every Tallneck and how to override them in Horizon Forbidden West.

During the opening hours of Horizon Forbidden West, players will be able to encounter their first Tallneck at the map’s eastern Cinnabar Sands location–the game alludes to the player multiple times that they should visit the area as Aloy asks various allies and locals about the machine’s whereabouts as she needs to override it. To reach the Tallneck located in the Cinnabar Sands, the player must repower the satellite dish that the machine is programmed to walk past every minute. Completing the short puzzle revolving around the satellite is the only way to reach a high enough jumping point to land on the Tallneck’s flattop disc head.

Upon reaching the Cinnabar Sands satellite, players will want to first climb the latter and retrieve the energy cell located on the second level’s underside. Upon traversing back down, players can now power on the ancient device by inserting the energy cell into the lone generator. Unluckily for Aloy though, giving the device new life and messing with the control panel is too little of an effort for a reward. The satellite’s dish will face the wrong direction of the Tallneck and becomes stuck once the player achieves these steps.

After climbing back up the top of the rotated satellite, players can use their bow to take out two distinct gray wires that will allow the device to lock into its standard upwards position. With another latter attached to the main tower now available to the player’s convenience, Aloy can climb to the top of the horizontal satellite dish and jump off the remains to reach the Tallneck’s data access point.

Just outside of the sand-drowned Las Vegas and the POSIDEON sub-function’s location, The Stillsands Tallneck was previously damaged by a passerby Oseram Camp whose efforts to topple the machine proved to be unsuccessful. After examining the area’s destruction and the Tallneck’s need for repairs, Aloy will recognize that she must fix the machine by first bringing it down. The Stillsands Tallneck is the only type of Horizon Forbidden West’s machine that the player will actually have to make an offensive approach against.

Using what’s left of the Oseram Camp’s gear, the player needs to make a stand against an oncoming wave of protective machines as the slain travelers once did. Surrounding the Tallneck are four untouched ballistas connected to massive iron anchors. The objective to defeat the Tallneck and its protecting forces has no time constraints, and the anchors will remain locked to the Tallneck once they are connected. It is important for players to take their time and eradicate nearby enemies so they can get in a clean shot on the Tallneck. After the machine is brought down, the player can override its data point and initiate its revitalization.

The Stand of The Sentinels

Located in an abandoned forest settlement around the northern region of the map, The Stand of the Sentinels Tallneck is arguably the easiest of its machine type to override in Horizon Forbidden West–it is surprisingly one of, if not, the only Tallnecks reminiscent of how players would typically approach the machines in Horizon Zero Dawn. All the player has to do to reach the Tallneck is climb the treetop structure and jump off.

Alternatively, for players who jump off the nearby mountainsides and immediately use their glider for a safe descent, Aloy can gently float directly onto the Tallneck’s head without having to do any extra climbing. After overriding the machine, do not forget to explore the in and outs of The Stand of The Sentinels’ abandoned settlement as there are quite a few ancient chests full of loot to pry open!

After using the boat and reaching Landfall, an injured Tallneck can be found stuck beneath the water and in dire need of a mechanic–luckily venturing into Las Vegas and gathering the sub-function POSIDEON has allowed Aloy to become a scuba diving mechanic! To begin the quest to reboot the Landfall Tallneck, the player must first dive underwater to observe the damage the water currents have done to the machine. With two sockets clearly missing their parts, the player can now follow the quest marker to an area by the shore containing multiple Glinthawk nests.

After retrieving the two missing Tallneck parts that were carried off by the water current, the player can return to the machine to activate a cutscene. As the Tallneck gloriously rises from the ocean floor and begins to traverse its territory once again, the player can now climb up the building closest to the machine’s track pattern and hop on to override it.

Deep within the mountains of Salt Bite is the IOTA Cauldron that players have the option to venture into. Technically, the player can unlock this Tallneck at any point after learning what cauldrons are during the main campaign of Horizon Forbidden West. Shockingly enough, the Tallneck located in Salt Bite is located underground. The machine was nearly complete years ago, however, its final production stage is being stalled by a technical hiccup. Once the player makes it to the end of the cauldron and overrides the machine after saving the head from a production lineup error, an elevator lift will bring the Tallneck and Aloy to the surface of the forbidden west.

Every player pushing through Horizon Forbidden West is bound to come across one central location that will confuse them. In the middle of the game’s map lies The Shining Wastelands, a flat plan containing hoards of deadly machines and one Tallneck traveling its standard oval path. Unlike Horizon Zero Dawn and its sequel’s other Tallnecks the player must override, the one located in The Shining Wastelands is not surrounded by any climbable structures or equipment that can pull it down.

Conquering The Shining Wastelands’ machine is actually one of the easiest Tallneck objectives Horizon Forbidden West has to offer–the greatest challenge it proposes is not having the urge to figure out how to climb the machine after first seeing it. Players cannot reach any of the Tallneck’s climbable parts until later into the game due to needing a specific override upgrade–for this reason, it is likely the final (or second to last) Tallneck that players will override.