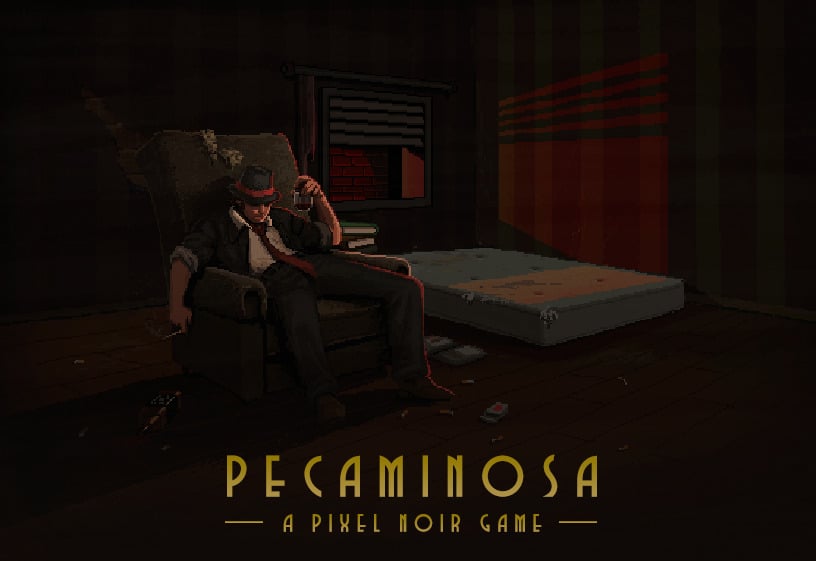 With a cigarette dangling from his lips and a half-full bottle of Mack Janiels whiskey at his side, Detective John Souza is the embodiment of the “troubled ex-cop”. In the noir world of Pecaminosa, a lush, pixel-art adventure game with RPG and combat elements, everyone and everything is a little bit of a stereotype. But this smorgasbord of tough guys, mooks, dames, and wisecracking anti-heroes is also full of crackling dialogue and beautiful pixel art. While the combat is often frustrating and exploration occasionally feels limited, there is a lot to love in Cereal Games‘ Pecaminosa.

Brusque when he needs to be and charming where it counts, the main character of Pecaminosa is a collection of tropes. In fact, the entire city, from the high-rise apartment buildings to the lowliest cab driver, feels familiar. But within that familiarity are some genuinely great concepts and satire. Pecaminosa feels like a mashup of many works of detective fiction, and it also brings its own ideas to the table.

Everyone has seen a down-on-his-luck detective drowning himself in booze and bad decisions. John Souza, the player character, is no different. He’s not the first man to turn to the bottle to battle his inner demons. But when Charlie “Two Angels”, a mob boss from Souza’s past who is dapper, deceitful, and dead, pays Souza a visit in the middle of the night, it is not the result of a drunken stupor. Instead, the ghost of Charlie offers Souza a deal: if Souza can “take care” of some of Charlie’s former allies, maybe Charlie can get Souza on the fast track to Heaven. This supernatural visitation gets Souza off his ass and back on his feet, ready to put his detective skills to work to find and eliminate these criminals.

The kickoff is exciting, but the actual adventure has a few quirks that might dampen noir fans’ enthusiasm. Genre aficionados will be excited to prowl the dim and dirty streets of the grimy districts of Pecaminosa, a city that feels like the worst parts of New York, New Jersey, and Chicago whisked together to form a cocktail of depravity. There’s a casino where the house always wins, a liquor store where the owner knows Souza just a little too well, and a brothel where players have to gather intel without arousing the suspicions of the resident madam. The streets and buildings are packed full of small details that bring life to the world. Homeless drunks sleep on tattered newspapers and shoo players away, and there are separate districts that are more immigrant-friendly than others. If Pecaminosa fully committed to letting players explore the city at their leisure or built more intriguing conversation options into the game, it would make an intriguing companion to the densely packed likes of Disco Elysium or L.A. Noire.

As it stands, it feels like Pecaminosa is spread a little thin. Since the game is presented in a top-down style and Souza can collect different guns, there are certain Hotline Miami-sized expectations that can be inferred. Rather than feeling quick and brutal, combat is unfortunately a little clunky. Most encounters can be solved by simply backing up and continuing to shoot, or by running away from them entirely. There is little nuance or self-expression to be had, though the game makes an effort to let players make their Souza unique with skill points (earned by raising levels through gaining experience points in combat) that can be poured into different traits.

It might seem interesting to increase Souza’s intelligence, unlocking different dialogue options, or his luck, with gives him a greater chance to dodge enemy fire. But players will most likely want to dump a bunch of skill points into endurance, which lets him move faster, because base movement speed is abysmally slow. Souza moseys along like he didn’t just get visited by a murdered mob boss from hell. Even the stamina-consuming dash which lets Souza traverse the streets marginally faster is slow to recharge, meaning that walking anywhere feels like a chore.

The world itself is gorgeous and there are a handful of interestingly designed boss fights that make up for the more tedious basic encounters. Pecaminosa‘s adventure game elements feel must more finely-tuned, leading to some conversations that have the crackle and spark of great crime fiction. Even though much of the actual plot beats are basic fetch quests, there is a layer of noir-ness that makes the game enjoyable. The greatest strength of Pecaminosa is how hard it leans into tropes and genre conventions. There are sly nods to Dirty Harry, Taxi Driver, and even Brooklyn-99, and while some players might roll their eyes at these references, they add to the flair and flavor of the proceedings at hand.

Strangely, the hard-boiled nature dissolves the further the player goes. A visit to a mysterious mansion in the second chapter is preceded by a trek through a zombie-infested desert, complete with giant poisonous insects that emerge from the sand. Since the combat feels clunky at best, this area can be a slog. More damningly, it doesn’t feel particularly well-explained, or even in line with anything else up until that point.

If players can put up with the plodding movement speed and a few odd stylistic choices, there is much to love about Pecaminosa. The characters are mostly well-written and beautifully animated, and the city itself is a pixel-art triumph. Combat may not be as snappy and intuitive as one would hope, but the twisty, turny, booze-soaked adventure at the heart of Pecaminosa will be a treat for fans of cop thrillers.