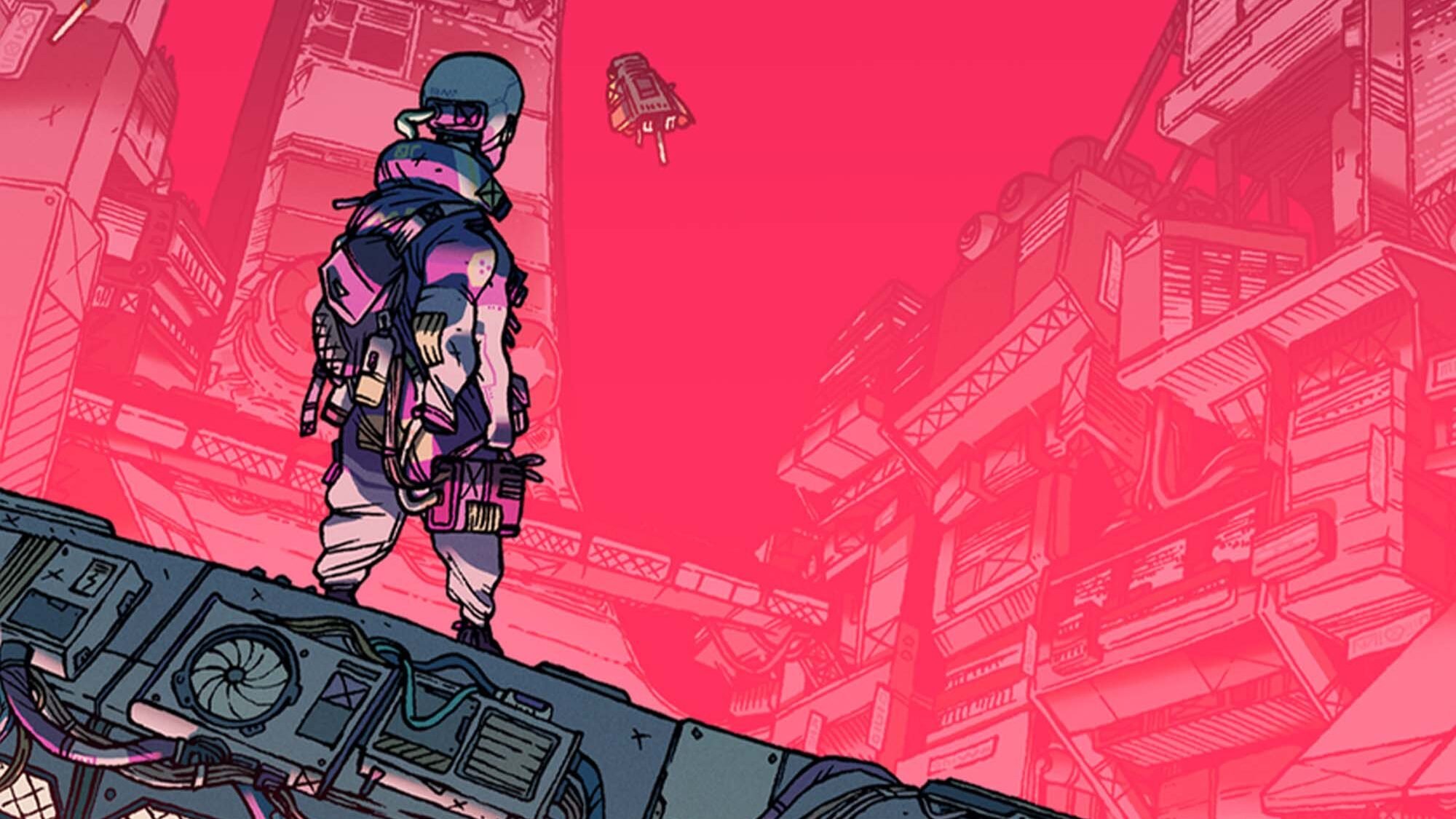 The best science fiction stories use technology or futurism to frame fundamental truths about humanity in a unique light. This is often easier said than done; when executed poorly, sci-fi dialogue can be didactic and overwrought, or the setting might be incredibly interesting but have little or nothing to say. And then there are games like Citizen Sleeper. A rich narrative adventure with light role-playing elements, Citizen Sleeper has some of the most evocative, well-written dialogue of any sci-fi setting in recent memory. Its world feels tangible, full of ideas and concepts that are easy to grasp but have deep and complicated implications. It is a game that is unafraid to pose questions that do not have easy answers. As prescient as Asimov and as achingly human as Vonnegut, Citizen Sleeper is a reminder that the best cyberpunk stories are also the most intimate.

“Can you confirm your legal right to sentience?”

Citizen Sleeper begins when the unnamed player character awakens alone in a cold shipping container. They’ve arrived on Erlin’s Eye, a space station that has seen better days. The player controls a Sleeper, a robot containing the emulated consciousness of a person who rented out their physical body to the shady-sounding Essen-Arp corporation. Sleepers have a stigma attached to them, and this Sleeper in particular, by flying solo, raises questions everywhere they go. It is up to the player to choose how the Sleeper spends their time on the Eye. Will they try and slip into obscurity, creating a quiet life for themselves away from the corporation they’re beholden to? Or will they actively try and escape the Eye, hitching on a ride on a spacefaring colonization ship that’s leaving soon? Players are free to make their own choices but there is one thing to keep in mind: the Sleeper is dying. Every road eventually leads to the same outcome.

Every Sleeper who escapes their confinement is built to decay. Without the support of Essen-Arp, their robot shell rapidly breaks down. But hope is not lost. Erlin’s Eye is home to some of the galaxy’s most stalwart individuals, hardy folk who have learned to survive in the bleak harshness of space. The Sleeper can find the supplements they need to keep their body running if they know where to look and keep the clock ticking for another cycle.

With this worldbuilding in mind, mechanics come into play. The player can only make a handful of meaningful choices per cycle, and those choices are determined by a set of dice rolls. At the start of each cycle, the player receives a handful of dice (think portent rolls from Dungeons & Dragons fifth edition) which can then be used to determine the outcomes of choices they make during that particular cycle. They might start the day with a six, two fours, a two, and a one; what they do with those numbers will heavily impact their momentum and progression. Generally, the higher the number, the more positive the outcome. Say the player wants to spend the cycle breaking down scrap for valuable cryo, the currency that makes Erlin’s Eye go ’round. Spending a “six” will net them an instantly favorable outcome, and maybe a little more money for their efforts; a “two” means there’s a chance their effort will fail, and they earn less money or even damage themselves in some way.

This doesn’t mean that low numbers are useless, however. Starting a cycle with a handful of low numbers might seem like a death sentence, but there are options for every roll. Players can hack the network of Erlin’s Eye to glean information about rival gangs and corporations, and through exploring cyberspace will find plenty of places to spend their low rolls. The dice are this game’s main form of currency, used to perform nearly every action. Thorough players will make an effort to find somewhere to spend any dice, no matter the roll, meaning a cycle is hardly ever a wash, despite the random number factor.

At every turn, the player must manage the Sleeper’s condition and energy. These two meters are constantly depleting, through negative outcomes on dice rolls or the simple passage of time. Though the Sleeper is arguably inorganic, Essen-Arp made them reliant on physical sustenance to keep their energy topped up, and nothing on Erlin’s Eye comes freely. Energy depletes rapidly, two clicks per cycle regardless of what activities the Sleeper engages in. Condition drops more slowly, but it is easily the most important stat. This determines how many dice the player can use in a given day. Fewer dice means fewer actions taken, which means less progression made. An easy comparison is the confidant system in a Persona game; it is easy for the player to lock themselves out of progression when they do not use their time wisely.

The player must juggle energy and condition to fulfill drives, the objectives of Citizen Sleeper. Drives come in all shapes and sizes; the first in the game is simply “Survive”. But after the player becomes more familiar with their surroundings and is able to move about Erlin’s Eye more freely, they’ll encounter more characters and with them, more drives to complete. Drives are the key to Citizen Sleeper, pushing the player to investigate every lead and come to know every side character they meet. They’ll be glad they did.

Depending on how you define the term, Citizen Sleeper can almost be classified as a survival horror game. Every choice the player makes, at least in the early game, is to prolong survival. But staying healthy is a churn, and the only way to truly progress is to spend time taking in the strange environment. Becoming familiar with the Eye takes time and risks, but the rewards are well worth it. Chasing drives will push players into experiencing new narratives, and the writing of Citizen Sleeper is incredible on almost every level.

Every character the Sleeper talks to has a reaction to their body. The very first character the player meets, a hardscrabble salvager, refers to you as “just… software. A rogue emulation illegally possessing corporate property.” And yet, they don’t turn the Sleeper in to Essen-Arp. Other NPCs range from being sympathetic to the Sleeper’s plight to acting downright hostile at their very existence. The Sleeper themselves essentially spends the game grappling with an existential crisis; after all, if they’re just an emulation of a memory in a robot suit, what is the state of their organic body? What is Essen-Arp doing with the original memories, if anything? Not all of these questions have neat and tidy solutions, but following these threads leads to some wonderfully written passages about the state of life, and what it means to soldier on in the face of impending doom.

This entire operation may sound dreary or even depressing. But every little interaction, from purchasing a meal from the talented fungus chef Emphis to working a bar shift at the Overlook to finding passage to the far side of the space station is deftly written and incredibly engaging. The Sleeper, through the actions of the player, is doing their best to survive in the face of unending hostility. There is warmth to be found: the reassuring hug of a child born on a space station who doesn’t view the Sleeper as anything other than a friend; the aspirations of a bartender who dreams of carving out a living like her family never could; a commune, where a collective has made a sustainable home for themselves based on mutual trust and a willingness to provide for everyone who works there. Stories range from short interactions to cycles-long arcs with multiple intersecting parts, where the player can miss out on conclusions if they don’t keep up with particular characters or complete certain tasks within a time frame.

While the narrative is the core of Citizen Sleeper, it is wrapped in a beautiful package. The art direction is gorgeous, and every character portrait (illustrated by French artist Guillaume Singelin) drips with personality despite a lack of animation or voice acting. Erlin’s Eye is essentially a static space that the player scrolls around, but it is brought to life by Amos Roddy‘s subtle sound design and perfect mood-setting music. Every part of Citizen Sleeper, from art direction to story, feels informed by the rest of the piece.

Completing drives is the heart of the game, and benefits the player mechanically as well as narratively. Each completed drive earns the player an upgrade point, which can be used to unlock helpful skills (rerolling dice one per cycle, or the ability to improve condition with found pieces of scrap) or even add a “+1” modifier to a dice roll. The more skills and upgrades are unlocked, the more likely it is that the Sleeper can fulfill their drives, and the richer the narrative experience of the player. Citizen Sleeper becomes a beautiful clockwork mechanism after a few cycles of struggle.

Narrative adventure games are undoubtedly having a moment, and Citizen Sleeper hits just right. It handles its existentially terrifying premise deftly and builds its intricate world through carefully considered dialogue. Though players will likely spend less than a dozen hours on Erlin’s Eye by the end of Citizen Sleeper, they will know it as well as any video game hub world.

But a world is only as interesting as its inhabitants. Early on, the Sleeper encounters a sarcastic vending machine, Neovend 33, a device with the ability to 3D-print various machine parts and tools that scrappers and engineers might need during a layover at Erlin’s Eye. The vending machine recognizes that it and the Sleeper have something in common: they are sentient beings but are considered “other” by everyone else on the space station. With some coaxing, and a little bit of hacking of the Eye’s network, the player and the vending machine can build a relationship. They are alive, beautifully so, with all the fears and hopes that entails. Citizen Sleeper asks the player to consider humanity in a new light, and does so through the lens of an excellently crafted cyberpunk-future world that feels close enough to be genuinely discomfiting.

What does self-awareness ultimately mean? Citizen Sleeper might not have a catch-all answer, but by asking the question, this game makes a case for itself as an undeniably memorable role-playing adventure.