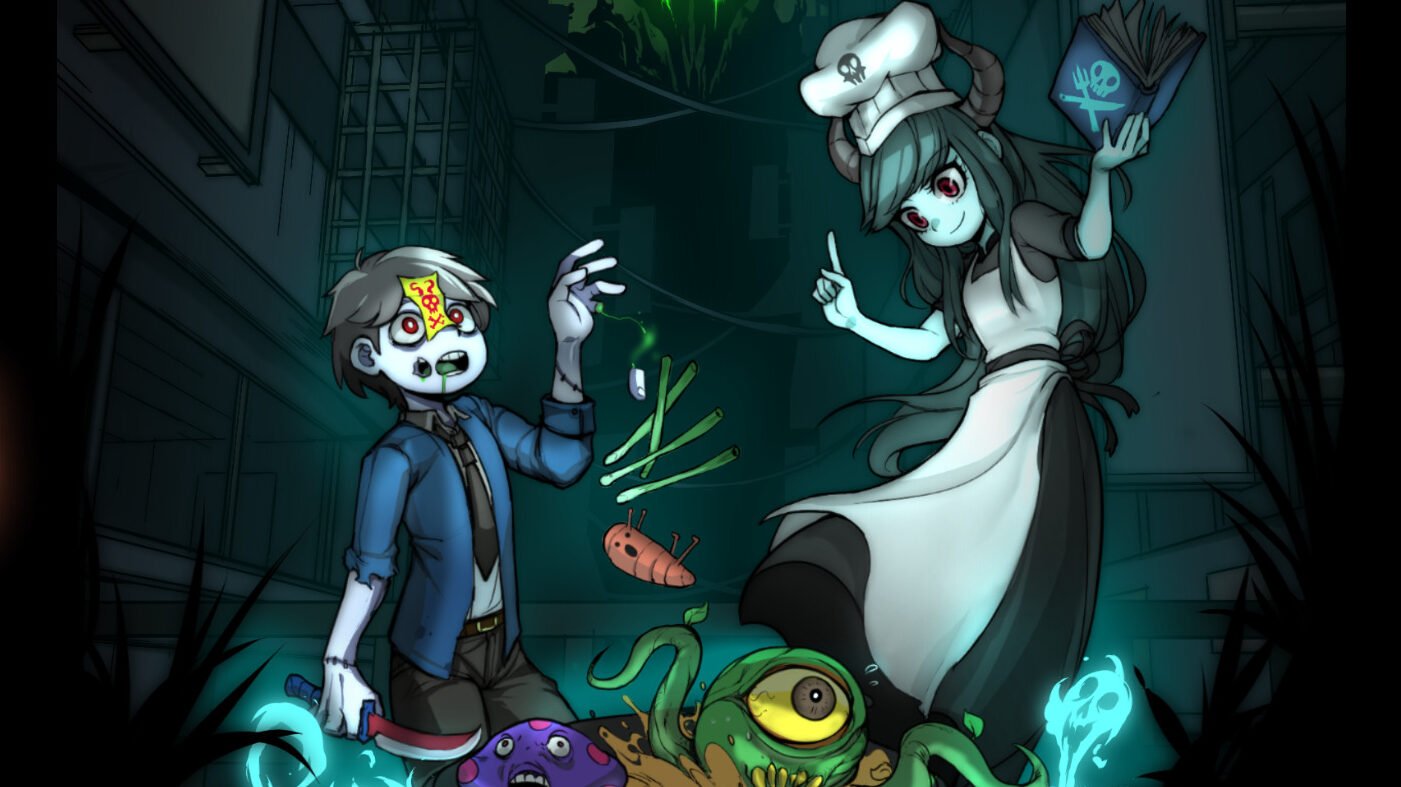 Most restaurant menus list the ingredients of a given dish so the diner has an idea of what to expect when their dinner is brought out. A great chef will use those ingredients in novel ways, surprising and delighting the guest with a fresh take on commonly-used components. Other times, the chef plays it safe, dishing out something tasty but ultimately familiar and a little bland. Dungeon-crawling extravaganza Dungeon Munchies, developed by Chorus Worldwide Games and released digitally after the recent Nintendo Indie World showcase, has some great ideas simmering, but ultimately doesn’t provide much for gamers to chew on.

Dungeon Munchies starts out promisingly enough: a resurrected zombie wakes up in a dangerous dungeon, and with the help of the cute ghost necromancer Simmer, wreaks havoc on all manner of creatures and sentient plant life. Soon enough, the player is scouring every corner of each mazelike level to collect cooking ingredients and other loot to cook and craft their way to a more powerful character build to survive the horrors within. A tongue-in-cheek mystery soon unfolds, as players learn the truth about the existence of magic, forbidden cooking, and a man-made apocalypse that is as hilarious as it is eerily prescient. Buoyed by great character portraits and solid music, Dungeon Munchies seems like the perfect dessert course to close out a very disjointed year of new releases.

The goal of Dungeon Munchies is simple: make it from one side of a level to the exit at the other end. This is a 2D side-scroller, packed with aggressive enemies. But combat in Dungeon Munchies errs on the side of being a little too easy. Players have two ways of customizing their character. They can equip their zombie with craft-able weapons, and fill their stomach with up to seven unique dishes. Dishes bestow wildly different skills, boons, and buffs to the player character, and weapons (a primary and a secondary) dictate damage and general playstyle. Will this surprisingly agile zombie wield a sword made of sharp grass and hide behind a shield of shellfish? Or will they utilize a mystical scythe that generates ghostly minions from the souls of defeated enemies? As the game progresses, the player will also absorb skills that permanently change movement options, like the ubiquitous double jump or a quick dash maneuver.

Experimenting with weapons is satisfying, as everything from magic wands and shotguns to shields and daggers feels distinct. But it’s the dishes that are the main draw and that make Dungeon Munchies feel memorable. Simmer the necromancer longs to pass her cooking gifts on to a new generation and finding pages for long-lost recipes like Tentacle Stir-Fry or Blood Lotus Tea in obscure locations is always a treat. Mixing things up is key, and discovering how dishes interact and overlap to provide the zombie with greater movement speed or increased damage is the most fun aspect of Dungeon Munchies.

Unfortunately, there are some pacing issues that detract from the main course. A surprisingly lengthy experience, this title goes from being a satisfying snack to a full-fledged meal, but not in a particularly justified way. The actual dungeon-crawling is not complicated, nor are combat encounters particularly enjoyable. Lacking is the satisfying, brutal give-and-take of something like Blasphemous, Salt and Sanctuary, or Dead Cells. Instead, players can blast through enemies without having to think too hard about what situation they might be facing. Managing an HP bar or a stamina meter only comes into play when certain weapons are equipped, and while it can be fun to mess around with shooting fireballs or drawing a bowstring back, the finesse required to utilize those weapons effectively doesn’t feel like it has much payoff.

There are no consequences when the player character is defeated. Every slain enemy drops currency, loot, or ingredients, but all of it is banked at the moment of collection. To some, this is a mercy; not everyone wants to battle a ghostly version of themselves to gain back their lost resources, a la Hollow Knight. But it does diminish the tension of going into a new area. Combined with thoroughly unsatisfying platforming and one particularly momentum-destroying boss fight in a later area and Dungeon Munchies starts to feel like its best ideas were during the amuse-bouche.

Dungeon Munchies does several things very well. The writing of Simmer and her minions is sharp and funny, though the 90s-reference-heavy humor may be grating to some (an “All your base” joke is almost certain to fly over the heads of most of this game’s audience). There is some interesting lore at hand for those who choose to talk to every NPC and interact with every terminal and journal.

But on the whole, the way the game is composed keeps it from being truly compelling. Finding and utilizing new recipes is fun, but levels aren’t especially fun to return to, even with expanded movement abilities. The plot and the relationships between Simmer and friends are intriguing, but the player character has little to no impact on anything happening onscreen. After a few levels, enemy variants start to feel frustrating to battle rather than exciting to face.

Dungeon Munchies is available now on the Nintendo Switch, PlayStation 4, and Xbox family of systems.