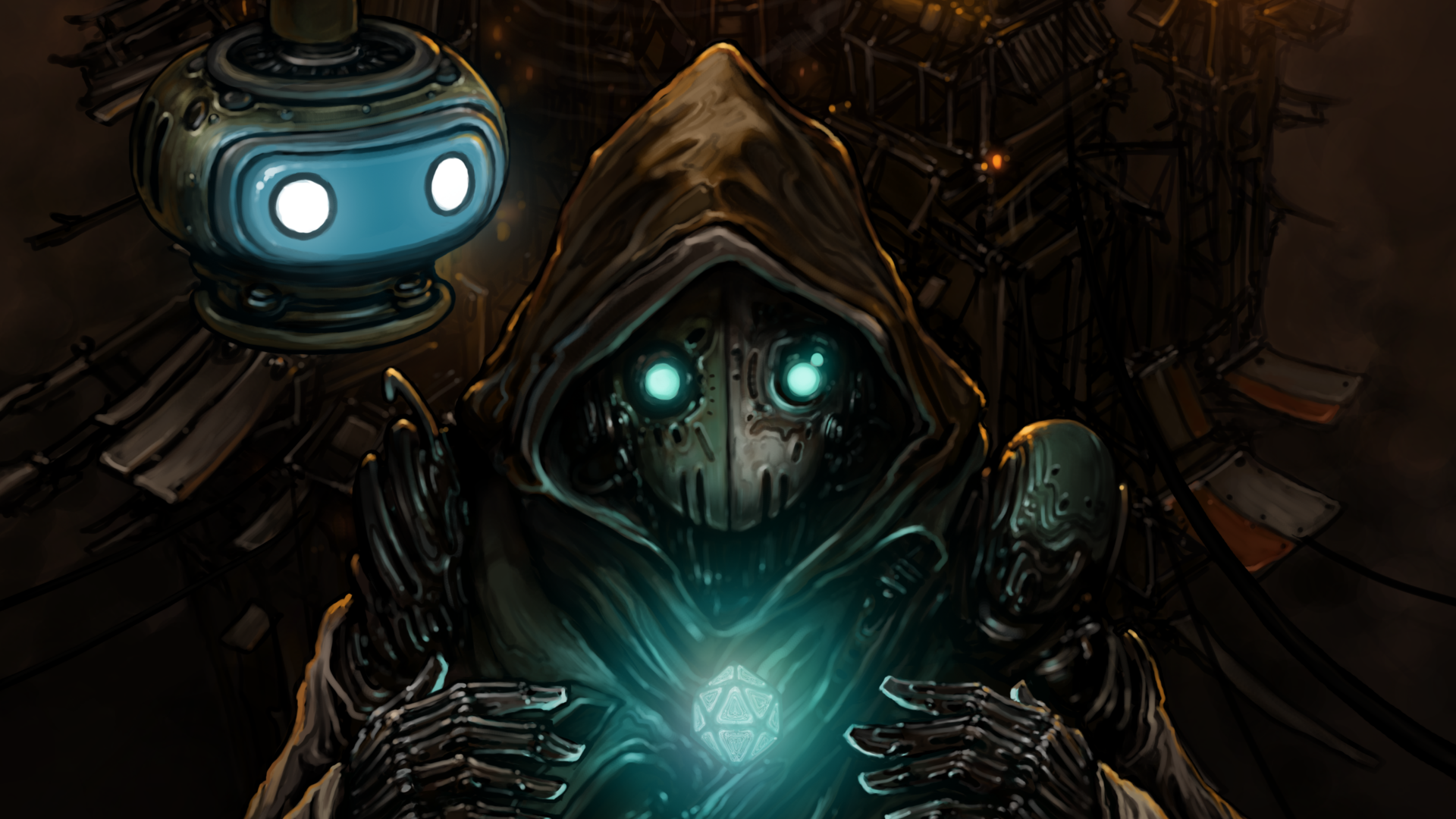 “In the beginning, all was still and silent. Then, Man the All-Builder spoke the Word, and the Word begat the Code, and so the world began to spin. Thus dawned the Primordium, the first age, the age of building.” For many robots in the world of Primordia, this Gospel is their coda, their driving force, the thing that inspires them and gives them hope in a divine plan. But player character Horatio, a human-sized robot living on the outskirts of robot society, wants to know more. Moody and introspective, Promordia is another perfect addition to the Nintendo Switch’s ever-expanding library of point-and-click adventure games. While it falls prey to many of the traps of its genre, those who persevere will find gorgeous art, great writing and voice acting, and a surprisingly deep story.

The world of Primordia is fascinating. In the future, humans are a distant memory, and the world is populated by several different varieties of robots. They have built their own society, with rules and culture. But Horatio, the avatar the player controls, does things a little differently. He lives out in the desert aboard a crashed spaceship with a floating robot companion, a gigantic telescope, and a dwindling power supply. When the ship’s power core is forcefully taken by another robot, Horatio and the ever-sarcastic Crispin must track down the thief, or risk powering down for good.

Adventure games must ride a fine line. Players must want to spend time in the world, to be drawn in by the aesthetic even as they encounter difficult puzzles with increasingly brow-furrowing solutions. Primordia‘s lush art direction is a definite point in its favor. Every background looks gorgeously hand-painted, and the pixel art is frequently astounding. Seeing the glowing city of Metropol up close or entering the mouth of a stories-tall goliath, there is always something incredible to discover. The world is packed full of details, from the sparking wires of Horatio’s ship the U.N.N.I.I.C. to argumentative robots standing in line outside of a courthouse. One minor complaint is Primordia’s pallet in certain sections- the browns of the Underworks can feel very drab, especially when trying to walk from one side of the screen to the other.

Though this is the game’s debut on the Nintendo Switch, it has existed on other platforms. The Switch version of Primordia is essentially an optimized mobile port, but that’s hardly a knock against it. Being able to use the touch screen is a blessing for this kind of game. Primordia also looks amazing on a large screen, and being able to take in the expansive landscapes feels beneficial to the mechanics.

A point-and-click adventure ultimately lives or dies by two factors: aesthetics, and puzzles. Primordia, for better and worse, is very much in the mold of its adventure game predecessors. For fans of the genre, they’ll find a number of complicated yet satisfying inventory-based puzzles and exceedingly clever writing. But for the uninitiated, some solutions may be mind-numbingly difficult.

Primordia draws from its inspirations even as it seeks to modernize its tropes. This is, at its core, the very essence of a point-and-click game. Players are given a map to explore, with several different screens full of points of interaction. The player has an inventory, where they’ll place items of significance that they find. Some items can be combined, broken down, and used in multiple situations; others have only one, specific use before they disappear, never to be thought about again. There are several different NPCs that can be mined for information, and if the player is careful in how they answer, they may be able to glean additional facts about the world or clues on how to solve specific puzzles. But in true adventure game fashion, solutions are rarely obvious, and hints are few and far between.

To Primordia’s credit, it is impossible to become soft-locked. The solutions to any given puzzle are always nearby, even if the player has to make some logistical leaps to arrive there. While esoteric solutions to seemingly simple puzzles are hardly news for anyone who has played one of these before, it can be frustrating to feel the momentum of the story slow to a crawl as players force themselves to “use” every item in their inventory on a given NPC in the hopes of some kind of reaction. It is easy to lose plot threads when minutes at a time can be spent trying to finagle the exact right order to combine items and use them on objects to move a plot beat forward.

That said, the writing in Primordia is uniformly good. Horatio (voiced by the always-brilliant Logan Cunningham) is a compelling character, and the sardonic Crispin makes for a worthy sidekick. Every robot has a distinct personality that reflects their worldview. The world feels alive, despite there not being a single human organism on the planet. Even the windswept desert that Horatio calls his home teems with possibility. The world feels lonely and mysterious, but never desolate, and unraveling the mysteries at the core of Primordia is a pleasure, so long as the player doesn’t mind occasionally feeling very, very stupid. Eventually, even the toughest puzzles can be solved with enough trial and error, and Primordia also features multiple endings for those who want to experiment.

These types of games are not for everyone. Primordia tells a haunting, intriguing, post-apocalyptic story with characters that brim with humanity even if they are made of metal. But this is not a straight visual novel, and those who are easily frustrated by obtuse solutions may want to look elsewhere for their sci-fi fix. Primordia succeeds at its goal: it is an exemplary point-and-click quest that just may create new fans of its rarely-modernized genre.