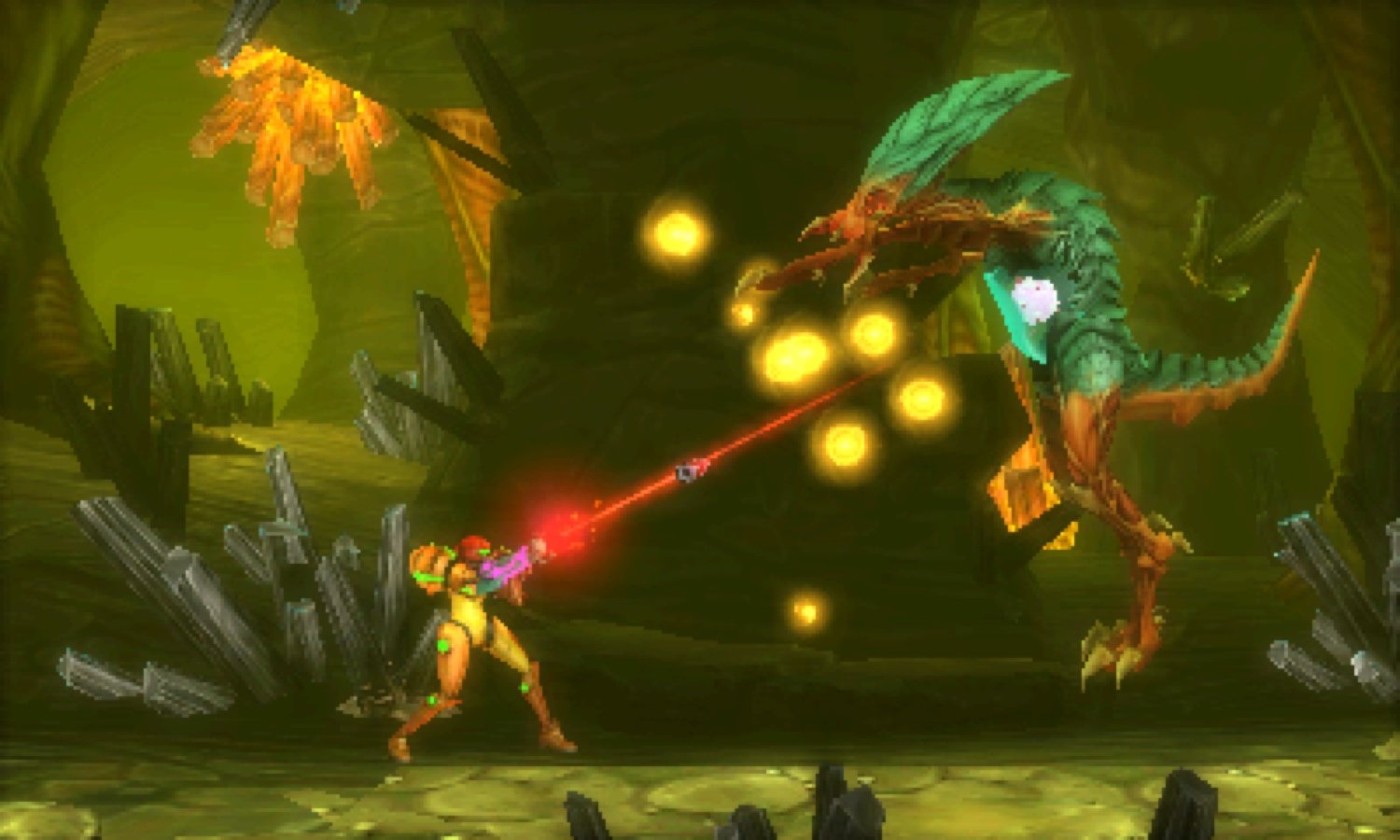 The only reason to show up at the 2017 Nintendo World Championship qualifiers wasn’t just to show off your superior karting skills (especially if you’re me). In addition to the competition taking place, Nintendo also wisely brought games, and while I had already played the demo for Super Mario Odyssey at E3, the allure of gamedom’s most famous galactic bounty hunter made the event even more of a destination point. After spending multiple sessions exploring its labyrinthine caverns and blasting enemies into bits of life-replenishing energy, I walked away from Metroid: Samus Returns more excited (and wary) than ever to take on the nefarious Space Pirates and their freakish creations yet again.

Right off the bat Samus Returns put my mind at ease with its tight controls. Feel is the single most important part of gaming for me, and having manipulated Samus for 30 years now, I have a fairly strong impression of how things should work. You never know how time and a new developer could possibly change things, but I’m happy to say that running, jumping, and blasting feels mostly the same, if not (I dare say) a little quicker and better. Samus stops on a dime, and the weight of her jumps feels just right to tackle moving platforms or wall maneuvers. She can aim in all directions by pressing the left shoulder button and launch missiles by holding the right shoulder and hitting the fire button. It’s a little weird at first but takes almost no time to get used to, and the extra flexibility is most welcome, as one of the biggest changes seems to be in the strength of the many denizens of SR388.

Usually, the creatures that hop, crawl, and swarm about Metroid games are essentially arm cannon fodder, but things are a little different in Samus Returns. The demo took place in the game’s opening moments, but that didn’t mean players were spared any real danger. Aliens were aggressive and could take plenty of hits, so charging right in and blasting away wasn’t a tactic for success. This created a couple of different strategies, where I sometimes found myself putting some distance between me and whatever was looking for a nice human meal, allowing me to kill from relative safety. The other way to tackle baddies is to carefully move in closer and wait for the perfect time to strike with a melee attack. This move is new to Samus Returns and involves timely execution. When an enemy glows it means they are about to charge and strike; a push the X button will cause Samus to smack them upside their alien heads and — at least for those initial foes — cause a momentary stun effect, leaving them easy pickings.

The melee move isn’t part of my instinctual Metroid repertoire, and as such, I was usually a half-second behind in remembering to use it, but when that arm swoop connects, let me tell you, it’s damn satisfying. I don’t think it will take long for this additional attack option to become a natural part of Samus’ moveset, and I loved the way it made combat feel vicious and fluid. Samus has always been a badass, but even more so now — and it looks like she’ll need to keep it that way. Maybe it was a little because I was halfways chatting with the friendly Nintendo reps (at least I like to think this was the reason), but I died several times during my play time. In the first area! Was not expecting that level of challenge at the get-go, but it forced me to stay engaged and start mastering the new abilities.

Speaking of which, in my session, I was able to find classic powerups like the Morph Ball, but also happened upon one of the new ones, a device that allows Samus to scan the surrounding area for breakable walls or hidden spots. Purists may scoff at the idea of not searching high and low unaided, but those who prefer to do things the old-fashioned way are free to never use it (they’re also free to make maps with a pencil and some graph paper, but somehow I’m guessing few will). The planet is loaded with twists and turns right off the bat, multiple ways to go and plenty of secrets to discover, and though I may not employ the scanner all that much, I’m happy to know it’s there.

Still, exploration is what makes the series so enthralling, and Samus Returns looks like it will not only satisfy, but sate. The group I was with ended up in all different spots by the time we were done, our short journeys diverging almost immediately. I found hidden missile tanks and energy refilling stations, while the kid next to me tracked down and murdered a Metroid (there’s a bounty out on 40 of them). The world is beautiful in its 2D polygon makeup, and packed with ambiance details like the occasional creepy corpse of what I assume was once a colleague. SR388 feels alive with movement and sound, and just like the best Metroid games, feels like its own character.

Though I could have happily spent all day wandering over the small turf the demo allowed, eventually I tore myself away, relieved that one of my favorites franchises in gaming was back, and so far seeming just as good as ever. There’s no question that come September 15th, I’ll be running, jumping, and killing every alien in sight, basking in the return of Samus.