After witnessing the bonkers end to Nintendo’s Spotlight presentation with the trailer for Super Mario Odyssey, and the reveal that the googly-eyed cap perched atop the mustachioed plumber’s head had the ability to demonically possess both friend and foe as if they were puppets with no free will of their own, one couldn’t be blamed for thinking that someone on the development team had either over-medicated themselves or lost their mind. Nintendo has never shied away from weird, but Odyssey (named after the hat-shaped ship that carries our little hero from one insane dreamscape to the next) is taking the Mario franchise to bizarre places it has never been, and the time I’ve spent on the E3 show floor with it has been some of the most eyebrow-raising fun I’ve had in years.

Only two scenarios were available (none of which involved T-Rexes), but they offered a mix of both the open-ended nature of certain worlds and the more objective-based structure of others. New Donk City is simultaneously creepy and cheery, a playground of high-rises to scale and street signs from which to swing, all while a mannequin-like populace (looking like robotic agents of J. Edgar Hoover) stroll about town offering hints, random musings, or partaking in mini-game activities so wholesome that they must be the cover for something far more insidious. I skipped rope with two expressionless ladies in the park who at first were twirling for no one, then inhabited the body of another gentleman as he attempted to drive an RC car through a makeshift course. Why? I have yet to get to the bottom of it, but it should be noted that all attempts to elicit the true ambiguously shifty nature of Super Mario Odyssey‘s setting from the supposedly uninformed Nintendo Reps was met with feigning innocence. 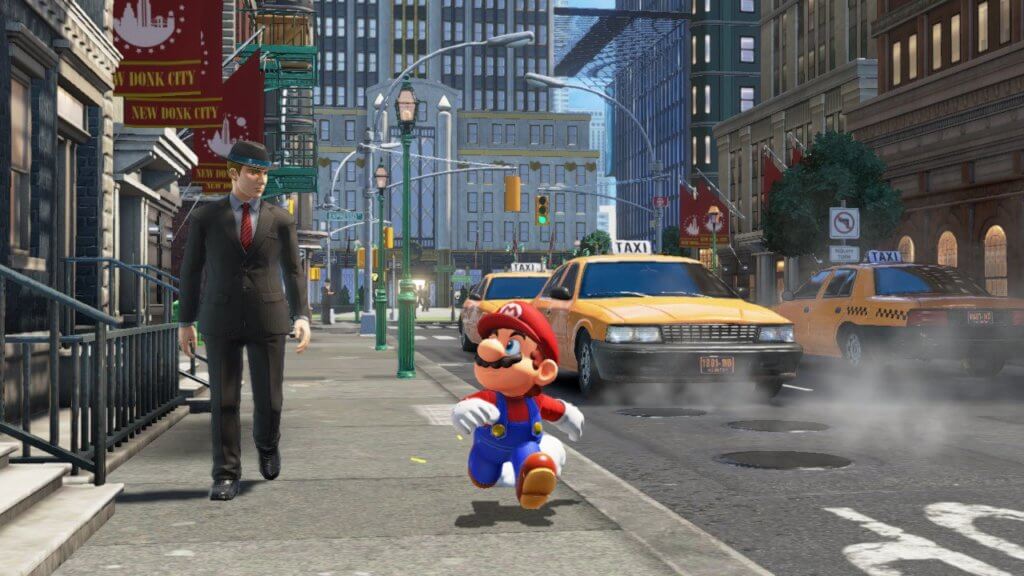 Secrets abound in these worlds, and it will be up to players to ferret everything out. Stomp every dumpster, run down every back alley, scale every tower, and talk to every local citizen. Mario controls just as tight as you would expect from a main franchise entry, with his usual assortment of butt-stomping, triple-jumping moves executed with ease, but it’s the throwable cap that gets much of the new attention. It can be used to attack enemies, smash boxes, serve as a jumping platform, and of course, take over certain beings. The Switch’s Joy-Cons factored heavily into how each move is done, as though a simple button push tosses the hat straight out, spinning the controller will result in the spinning of the hat or shaking both sends it hurling out like a vertical buzz saw. The Nintendo Rep was unsure how these moves would be accomplished with a pro controller (though they likely will be), but the motions felt fine, and in no way seemed overly gimmicky.

During my time I searched for jazz musicians to aid Pauline (the city’s mayor), shot up the side of a skyscraper by becoming like a bolt of electricity (reminiscent of a similar move in Splatoon‘s single player), bounced off the hoods of taxi cabs, drove a moped, visited a night club, killed mosquito monsters, and action-hero jumped off the top of one building into a roof side pool on the adjacent one, a la True Lies. It was awesome, even if none of it really felt like stuff I would normally be doing in a Mario game. New Donk City is teeming with places to explore, and collecting a moon (Odysseys‘ objective) doesn’t kick you out of the world, leaving the whole thing feeling very free, non-linear. It’s not a stretch to say that this portion reminded me a little of Breath of the Wild‘s level of freedom, with the sense that reward was lurking around every corner.

The other playable section took place in the desert setting showcased in the trailers, with a Day of the Dead-themed village, complete with a haberdashery and clothing shop. Ever wanted to dress Mario up in a 1930s gangster suit? Well, now you can! Loads of options for ditching those overalls are available, giving players unprecedented ability of expression with the Italian plumber, just another thing that felt very strange, if completely welcome. Setting out into the vast sea of deadly dunes is slightly more familiar, the more guided path and traditional obstacles grounding the insanity a bit, even if plenty of divergences still pop up along the way. That’s not to say that there weren’t surprises, however. Entering a blocky warp pipe sends Mario back to the 8-bit era, as he runs and jumps again in 2-D along the face of a cliff or the rounded wall of a tower. These clever sections were as playful and satisfying as the mural moments from A Link Between Worlds, and served as yet another reminder to expect the unexpected.

It was hard to get a firm foothold in Super Mario Odyssey, as it kept throwing in new gameplay ideas without pausing to catch its breath. Though the rock-solid platforming is as dependable as ever, the ways in which it’s presented are constantly surprising, supremely strange. The whole thing feels off in the best way possible, and though my time with it was short, I haven’t been so caught off guard by a Mario game since Galaxy. Will the rest hold up? We’ll soon see, as Super Mario Odyssey releases October 27th this year.