For the Metroid fan, it’s either feast or famine. Up until last June, series devotees were in a record-long drought, having waited seven years for word of a…soccer-less Metroid game. But then E3 2017 landed the one-two knockout of Metroid: Samus Returns and Metroid Prime 4. It was as if history had nearly repeated itself, as fifteen years earlier the simultaneous release of Metroid Fusion and Metroid Prime ended another near-decade-long dry spell. And while Metroid Fusion remains a fondly remembered game, Metroid Prime stole the show, bringing the franchise into 3D while collecting countless accolades. But how does the Gamecube’s killer app hold up a decade and a half later? In celebration of Metroid Prime’s return, I will be systematically analyzing the design of each of the original’s main areas. Tally-ho, Tallon IV — it’s time to scan you region-by-region. In this entry, I will look at the game’s third area: the Chozo Ruins. 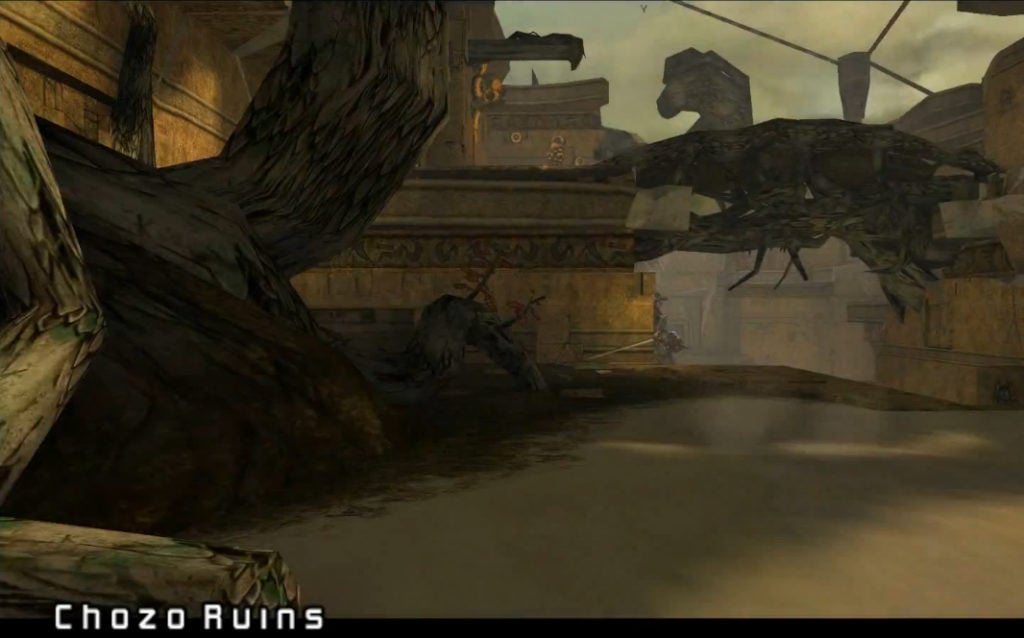 The Chozo Ruins are the first region Samus more or less stumbles upon. In a game so focused on exploration and environmental ambience, this haphazard method of discovery perfectly suits the game’s overarching design values. Moreover, it perfectly suits this particular region’s lore, which fatalistically tells the tale of a technologically advanced species who successfully ditched tech to rekindle their spirituality and connection to the natural world. But after a Phazon-spreading meteor pummeled Tallon IV, they put their faith in a chosen one who would one day rid the planet they loved of its various afflictions. Of course, that chosen one turns out to be Samus Aran, and the inscriptions and upgrades scattered around the Chozo Ruins were intended specifically for her. This is all to say that the player’s action on Tallon IV were predestined and the playing of the game itself an actional unfolding of history in the making.

This approach lends Samus a further sense of purpose and underscores the sense that whatever progress the player makes is the right kind of progress, foretold by ancients of unparalleled wisdom eons ago. The scannable lore therefore makes storytelling not only more diegetically consistent and player-dependent, but also more flexible than conventional storytelling methods like cutscenes, which would make the narrative more linear and less purposeful, thereby in stark contrast to Metroid’s core game design. It’s a remarkably mature interactive narrative way ahead of its time, and it works better in the Chozo Ruins than anywhere else in the game. That isn’t to say it doesn’t work elsewhere, but the story of the technologically-dependant Chozo who searched for naturalistic refuge and built a back-to-basics city of stone is rooted in values and beliefs that pervade our own culture, when our increasingly tech-critical culture is finally realizing the negative impacts of some of our technologies on our ways of life and our environment. The lore in this region doubles as cautionary words of wisdom as well as a compelling depiction of a fascinating culture, propelling it a cut above the writing of other regions and in most contemporary games, often steeped in hackneyed banter and derivative lore devoid of anything meaningful, let alone wise prophecy. 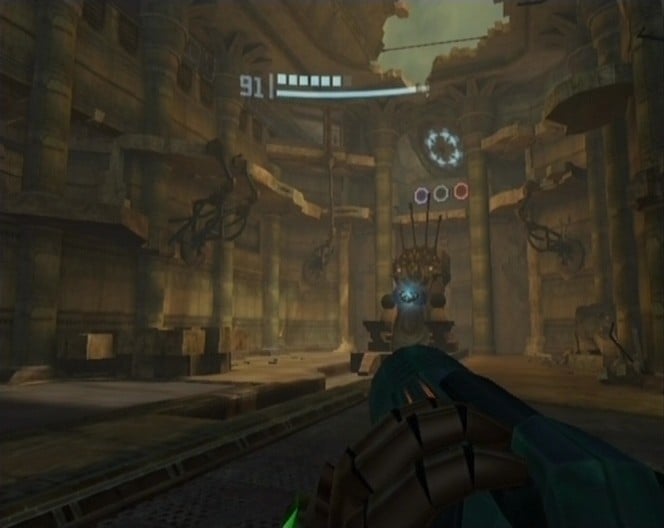 Indeed, the Chozo Ruins are a mix of ruins and desert, a harsh wasteland where the only prevalent signs of life are carapaced insects, presumably because the conditions are too extreme for megafauna. In a world where the newspaper reports on the projected dates humanity will become extinct from climate change, the Chozo Ruins feel not only ruinous but post-apocalyptic. They convey the story of a species who tried to change their fate but ran out of time — a story we’re possibly living through right now. A story where reading tips on composting or ballot initiatives on public transit are our own real-time scannable lore, efforts of a species on the brink of extinction trying their hardest to save the planet they love.

The tight passageways and tiny rooms of the region further contrast with the vast dystopian techno-palaces we saw in the Frigate Orpheon, which reflect an entirely different set of cultural values betrayed by not only lore, but architecture and layout. The piecemeal design of the Chozo Ruins makes navigation simpler than in later regions, with most rooms surprisingly distinct from each other despite their heavy use of tans and topes. And each of these rooms contains a specific challenge and conveys specific information, evidencing that these are the ruins of a place designed with intent, where every space served a purpose as part of a greater civic whole. It’s all on display in the windy, overgrown hallways: Retro wasn’t afraid to buck first-person design trends to build a world around what it means to be a first-person Metroid game, what it means to play that game on the single-analog stick Gamecube controller, and what it means to build a world rather than a disconnected string of places. 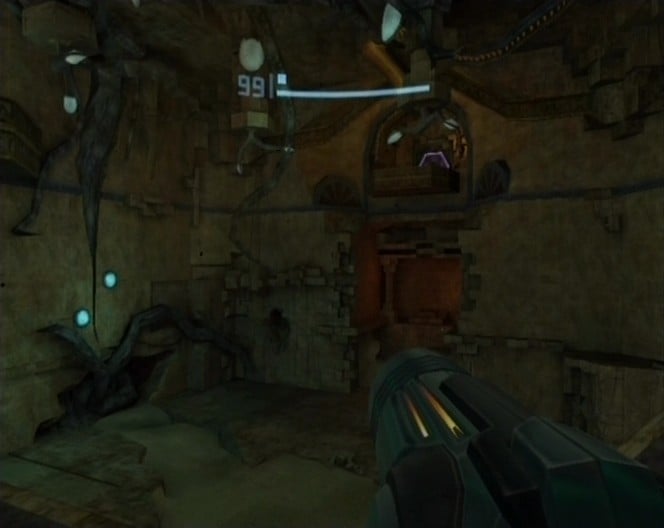 This compact, deliberate design plays perfectly into the Chozo Ruins’ modus operandi: small-scale gameplay diversity. Metroid Prime as a whole invests wholeheartedly in the diversity of its locales, flora, fauna, and so forth. That diversity is a key part of what makes the game so memorable and Tallon IV so irrevocably special. But the Chozo Ruins are home to an especially broad and deliberate array of gameplay diversity. Indeed, almost every room in Chozo Ruins is entirely specialized, built around a single vector of thought that asks and answers what a given ability or item can be used for. Because of this, the Chozo Ruins is packed to the brim with minor puzzles, from scanning hidden icons, to timed jaunts through tiny mazes, to morph ball gauntlets. Its placement early in the game means that it relies on Samus’ core abilities rather than entirely new items as gimmicks, but it keeps the experience fresh by challenging the player to utilize those basic abilities in ways most of the game’s regions don’t. For example, where else is the Morph Ball used so effectively as a tool for combat, a way to access shortcuts, and a solution to a wide array of puzzles? The Chozo Ruins also feature a wide array of enemy designs, that when combined with the puzzles, make for a surprising variety of experiences in its series of cozy rooms. And since this is all featured at the start of the game, and is mostly built around a certain amount of energy tanks and missiles, the ruins also boast the most fine-tuned difficulty of any region on Tallon IV.

Featuring four Energy Tanks, nineteen Missile Expansions, one Power Bomb Expansion, three Artifacts, the Morph Ball, the Bomb, the Charge Beam, the Missile Launcher, the Ice Beam, the Wave Buster, and the Varia Suit, the Chozo Ruins are packed with more power-ups than any other region. Once again, the densely-constructed rooms prove a big boon, since uncovering power-ups revolves less around sporadic visor-switching than methodically analyzing your surroundings and determining an appropriate course of action. This often requires use of at least one visor or the morph ball, and is often linked to a puzzle or minor battle, rewarding the player for their accomplishments in a piecemeal but consistent fashion. With such a plethora of items, there is not sufficient time to delve into each one, but suffice it to say that the majority of the items are quintessential Metroid, and each one is used effectively, if not brilliantly. There is no “X-Ray Visor-tier” pick-up in the bunch — these are all solid upgrades, perhaps nothing blazingly innovative but all well-realized. That said, I wish several beam types were put to a wider variety of uses in both combat and puzzle-solving, because those instances in which they act significantly different from each other add a potent later of strategy and meaningful choice. Also, the huge swathe of pick-ups makes backtracking through the Chozo Ruins less tedious than in most areas because there is almost always some previously inaccessible item the player can now access with equipment they gained since their last trek through. 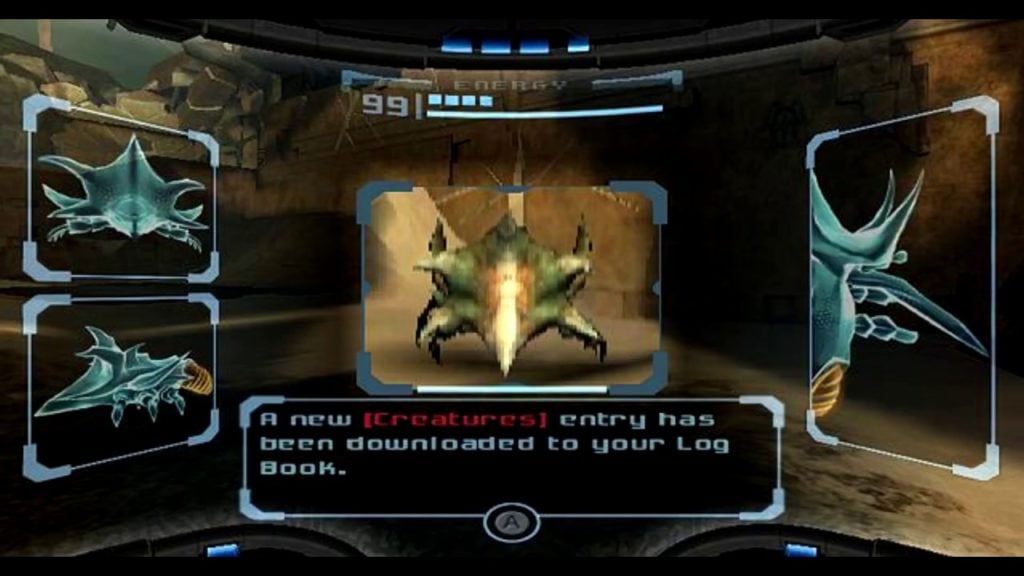 The Chozo Ruins feature over twenty-five different lifeforms, many of which the player cannot interact with in any meaningful way. There is an especially heavy emphasis on insects, many of which travel in swarms and/or fly. These bountiful beetles feel unique to the Chozo Ruins and in first-person games generally, but the region could have benefited from a wider variety of enemies and enemy behaviors. Indeed, many of these enemies require the same button-mashing strategy, rendering the differences between them minor in practice even if they are markedly different in appearance. On the other hand, these enemies suit the cramped rooms and hallways of the Chozo Ruins very well, and they allow for combat in interstitial areas that most games would write off entirely. Furthermore, starting off with mere bugs and Metroid staples triggers a stronger sense of progression later in the game when the player encounters larger and more behaviorally complex enemies. 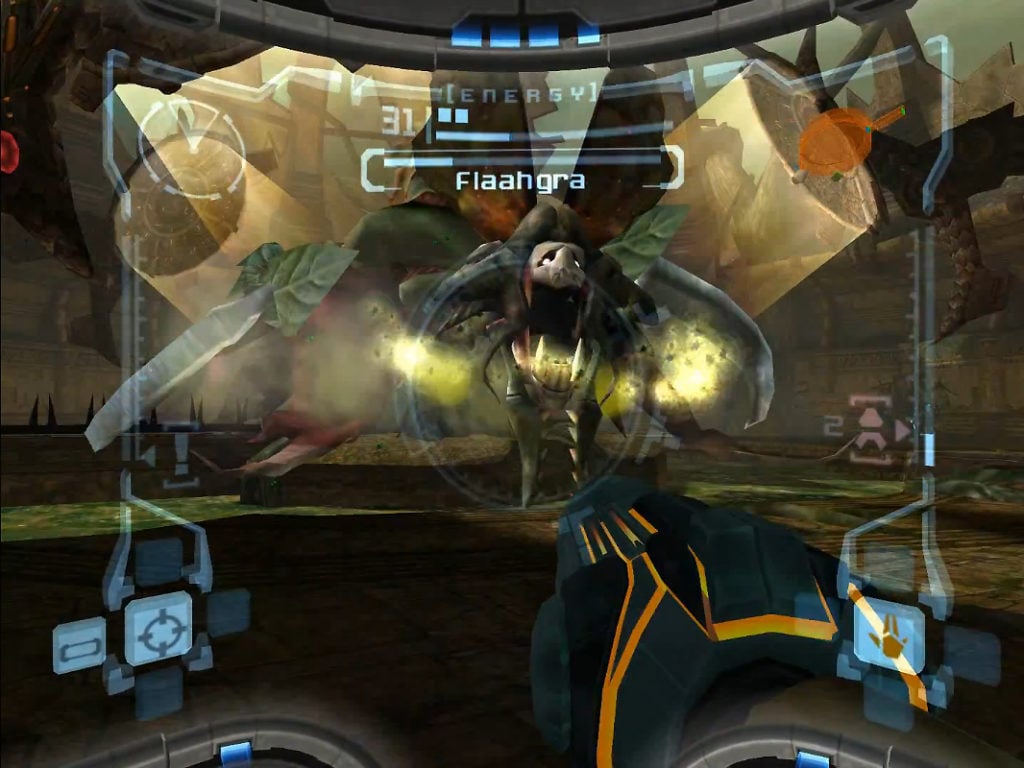 In addition to these creepy crawlies, the Chozo Ruins houses three boss fights. The Hive Mecha and Incinerator Drone both mix-and-match swarms of insects with a central mechanical antagonist, neither of which feels as much like a boss character as a characterless obstacle. They also introduce an unfortunate Metroid Prime bosses motif — waiting. Oftentimes, Metroid Prime’s boss fights alternate between times when the boss is vulnerable and times when Samus is vulnerable. These games of slo-mo tit-for-tat are one of the few areas in which Metroid Prime does not borrow from Super Metroid, and it’s typically worse off for it. Of course, part of the reason for this is that it shoehorns the battle into lengthy sequences of repetitious pattern recognition while disempowering the player. But just as agitating is how the prolonged times on defense are mostly spent inactively waiting rather than actively defending. In doing so, these boss battles unfortunately flip the openness and flexibility of Metroid Prime’s design on its head. However, the third and central boss fight, Flaaghra, ditches this trend while also better embodying the Chozo Ruins’ bug theme and tying the region’s noxious atmosphere to the player’s actions. This is by far the Chozo Ruins’ most thoughtful and deliberate boss battle in every regard, from its blend of action and puzzle, to its integration of the morph ball, to its impacts on the overworld.

The Chozo Ruins may not be Metroid Prime’s most awe-inspiring region, but they are its most densely realized and carefully constructed. Its consistent mix of diverse gameplay with groundbreaking storytelling succeeds as much on an inch-by-inch scale as it does conceptually, exuding a depth of thought and attention to detail lacking in larger-scale regions. While elements of its art might be drab or repetitious, no other region so seamlessly blends the scanning, explorable environments, light puzzles, and strategic combat that make Metroid Prime’s gameplay so utterly unlike anything else that people still debate its genre over fifteen years later. In terms of sheer design, the Chozo Ruins represent Metroid Prime at its finest, striking a delicate balance between openness and linearity, story and lore, puzzles and combat, and old and new.