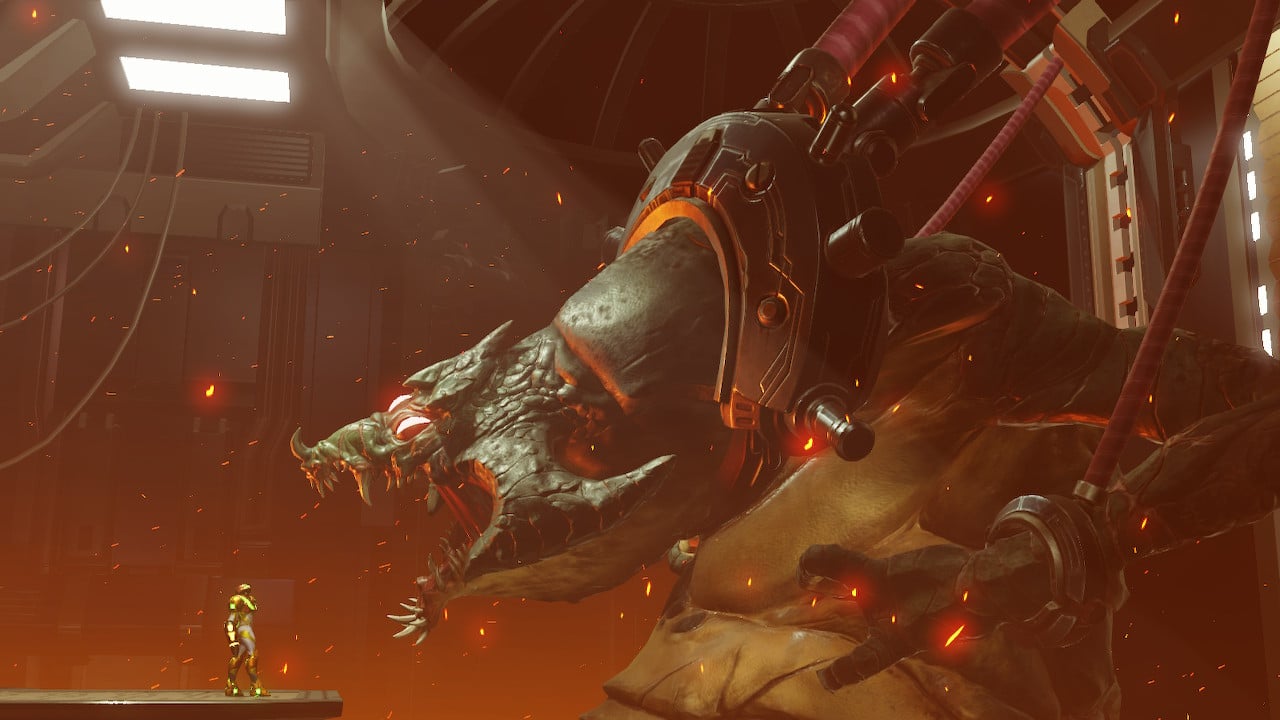 As the first totally new 2D Metroid game in nearly two decades, Metroid Dread has some pretty big shoes to fill. Developed by MercurySteam and Nintendo (who helmed Metroid: Samus Returns for the 3DS), the latest Metroid game doesn’t just live up to these lofty expectations; it downright surpasses them.

The canonical 5th game in the mainline Metroid saga, Metroid Dread, is set after the events of Metroid Fusion and sees bounty hunter Samus Aran dispatched to a Chozo planet called ZDR. A short video of an active X parasite sighting there sees Samus as the natural choice for the federation, being that she’s the only one immune to the X.

However, upon arrival, Samus is attacked by a Chozo warrior. Now stripped of her powers (surprise, surprise) and separated from her ship, she must battle her way through the mysterious and dangerous ZDR landscapes in order to reach her ship and escape to safety.

Though longtime fans will be more or less familiar with this setup, where Metroid Dread changes things up immediately is in separating you from even your most basic abilities for the first few hours, including the iconic Morph Ball. This forces player to unscrew their heads a bit and adapt to playing the spacefaring series while ignoring some of their natural combat and exploratory impulses along the way.

This isn’t the only challenge that Dread throws your way, however. The latest Metroid title is by far the most challenging game that this franchise has ever seen for a few reasons. First off, it can be tough to navigate. With nine areas to explore and lots of backtracking, players will occasionally find themselves very lost. Further, forward progress sometimes comes down to blasting aimlessly around the room in hopes of finding a secret path, something casual series fans may find a bit tedious.

The other central challenge posed by Metroid Dread is its hardcore enemy and boss design. Even regular enemies are genuinely dangerous here and when the boss and mini-boss encounters come around, look out, folks! These bosses can wipe you out in three or four hits if you’re not careful. They require intense focus, mastery of the mechanics, and some quick reflexes to best.

That’s without even getting into the EMMI encounters. The most touted aspect of Dread‘s marketing campaign by a long shot, the EMMI are incredibly mobile, near-indestructible killing machines that will ruin you in a single hit if they get their hands on you. Requiring way more stealth time than any Metroid game yet, the EMMIs can be very challenging foes as each one has different abilities and will require a new strategy for Samus to take them out.

With all of this in mind, Metroid Dread demands more from you than any game in the series ever has. Like with Breath of the Wild, you will be seeing the GAME OVER screen in this Metroid game way, way more than you’re likely used to. This might scare off some new fans, but for longtime devotees and fans of souls-likes or tough-as-nails platformers, this level of challenge will make Dread all the more rewarding.

Massive difficulty spikes aside, there is a lot to love here. First of all, this game is enormous. Players will find themselves gob-smacked when they return to the load screen after 5 hours, only to find they’ve only completed 10-20% of Dread in its entirety. No, really, Metroid Dread is genuinely massive, and it takes a ton of dedication even to beat, let alone to find all of its many secrets along the way.

This will be music to the ears of the classic Metroid fans and, while Metroid Dread was lovingly designed with these players in mind, it also offers plenty of new ideas to evolve the franchise. We’re all familiar with the notion of 2.5D gameplay by now but how Dread changes our conception of it for the EMMI showdowns is a real game-changer. Ostensibly shifting the camera into the 3D space while offering a tense, nail-biting, precision blast-off, these short, brutal fights are a real marvel to behold.

All of this is without even getting into the copious amount of new lore that is unfurled here. The Metroid series has always been light on overt stories and more about implied storytelling and visual references. You’ll be happy to know that Dread maintains this tradition, but it’s still staggering just how many cut scenes there actually are here. Many boss fights have both an introductory cut scene and a closing cut scene, usually seeing Samus dispatch the big bad in an incredibly badass fashion to boot.

Even more so, there are the many implications of Dread to the Metroid universe to consider here. The idea of the Chozo, metroids, the X parasite, and even Samus’ origins as a human child raised by an advanced avian civilization are explored heavily in Metroid Dread. The franchise moves forward to a pretty significant degree due to this focus.

Perhaps this is only natural when you consider Nintendo calling this the end of this particular saga in the Metroid universe. All the same, to see a series that has been stuck in prequels in remakes for almost 20 years suddenly take this daring leap forward is particularly impressive, if only in the level of boldness alone.

Finally, Metroid Dread looks phenomenal. Rest assured, there has never, ever been a Metroid game that looks this good. The game’s polish is also staggering, with active elements occurring in the background of many stages like galloping alien stags or swirling hordes of insects. The weather effects, the stage design, and the way the world unfurls will all leave you breathless as you struggle desperately to survive the next considerable challenge Dread throws your way.

Rest assured, though, that the struggle is absolutely worth your while. The ultimate culmination of classic Metroid tropes and modern design philosophy, Metroid Dread is a treat for fans of the hallowed Nintendo series and anyone who loves a challenging, old-school throwback. If you commit to this game, it will reward you in ways you could hardly even imagine when you first began, and, for that alone, it ought to be commended.