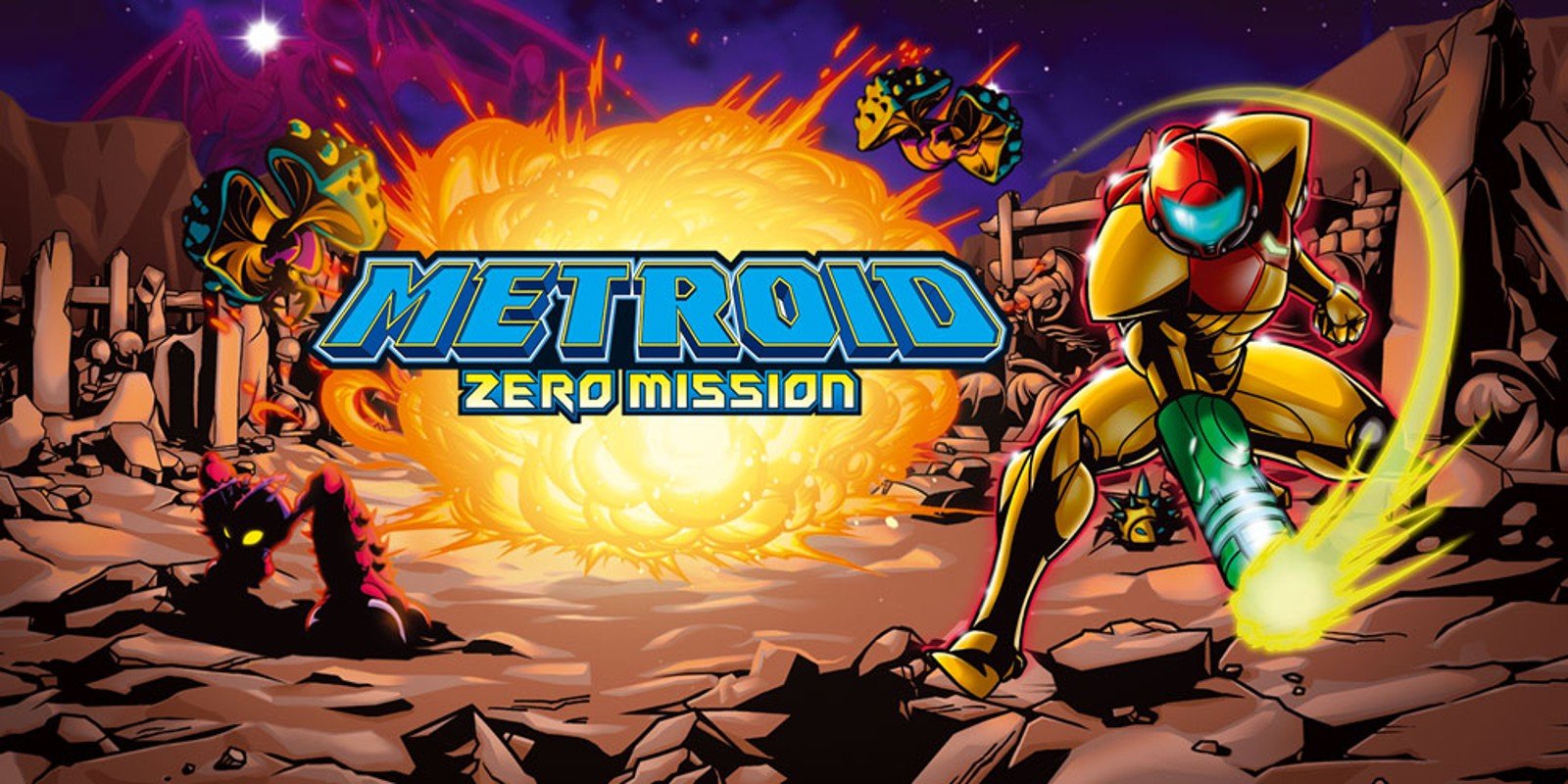 Metroid: Zero Mission is much more than a simple remake; in the past few years, the market has become inundated with a number of remastered versions of classic games, from Devil May Cry to Ico to every 3D Zelda game including Skyward Sword. Even within the Metroid series, we got the Metroid Prime Trilogy on the Wii, which included the first two games in widescreen with added motion controls. Those are all fine and dandy for those who have yet to experience older titles, but Metroid: Zero Mission does so much more. It offers something not only to the newcomer but to the veteran as well: a completely unique way to experience Samus’ first mission in what is easily one of the best Metroid games available.

In the context of the Metroid series as a whole, Zero Mission shares a story with the NES’ Metroid, but the bare-bones narrative is where the similarities start and end. Samus has to infiltrate Zebes in order to stop the Space Pirates’ experimentation on Metroids and, in doing so, defeat their generals: Kraid, Ridley, and Mother Brain. Past this, Zero Mission is a wholly different experience.

Not only are the visuals vastly improved (and some of the best on the GameBoy Advance), but the game world, controls, items, bosses, ad infinitum are brought into the post-Super Metroid world. The controls were influenced by even further games in the series, taking most of their cues from Metroid Fusion. The jumps are tight, in sharp contrast to the certain degree of floatiness inherent in Super Metroid’s Samus. While in her SNES and GameCube outings Samus felt like a tank, her incarnation in the two GBA titles is far more agile. It only takes a few minutes in the game before players can nimbly zip around the environments, plumbing Zebes’ briny depths with ease. The main contributor to this change is an added piece of gear, the power grip. This allows Samus to grab onto ledges with her left arm while still being able to fire her arm cannon.  In addition, she can jump from ledge to ledge. This feels like an easier version of a well-executed wall-jump in Super Metroid, and the fluidity of movement this allows players is incredible. It’s also implemented into combat, as the Bug Larvae fight gives Samus opportunities to climb onto the sides of the arena and load the boss up with missiles.

In addition to making the act of playing feel great, these power-ups affect the way the game world was structured; with the exceptions of the basic world map and some fun throwbacks to the original game, everything was overhauled to make use of Samus’ new abilities. To use the power grip as an example again, there’s a vertical corridor in Kraid’s area that requires players to jump from wall to wall in order to get a missile upgrade. This serves to highlight Samus’ new abilities in a fun way; this sort of repeated jump was impossible in the title Zero Mission acts as a remake of.

The main improvement to the world, however, comes from the visuals. Whereas in the original Metroid, the 8-bit graphics meant that remembering which areas were which was nigh-impossible, leading a number of players to construct their own pen-and-paper map, the artistic diversity present in Zero Mission allows for far greater ease of navigation. As an added bonus, the game looks legitimately great, and not just by GameBoy Advance standards. The fog effects in Tourian and the lava in Norfair look particularly impressive.

An interesting addition to Zero Mission’s gameplay is the Chozo Statues littered throughout subterranean Zebes, or more specifically, their added features. By rolling up into a ball in the avian sculptures’ talons, Samus’ map data is updated, with a glowing circle highlighting the location of her next target. While the location is pointed out, the methods (generally plural) of getting there are left up to the player, providing a nice compromise between the completely hands-off nature of instruction present in the early Metroid games with the relative linearity of Metroid Fusion. As someone who definitely prefers my Metroid games on the confusing end of the spectrum, this in no way alienated me from the game, and I was enjoying myself even with the added guidance.

After Mother Brain’s lair goes up in flames, with players being treated to one of Metroid‘s hallmark escape sequences, Samus flies off in her gunship, Tourian exploding in her wake. Roll credits, item collection percentage, and game time, right? Not exactly. All of the changes that I’ve mentioned up to this point have been in the main game: Samus’ trek through old ruins on her way to defeat Mother Brain. This in and of itself feels like an entirely new experience when compared with the NES classic, but the development team felt compelled to go even further, adding a little bit of cheese to their meat and potatoes. Right when it would appear that her job is finished, Samus’ ship is shot down, forcing a crash landing near the Space Pirate’s mothership. Left with only her blue Zero Suit and an emergency stun pistol, Samus has to infiltrate the base and find a method of escape in a sequence that would make Solid Snake proud.

For a 2D game, the stealth is incredibly fun. Having all of the armor, super-missiles, and bombs stripped away does a great job at making the player feel just as vulnerable as Samus, turning what would be another routine home invasion into an enthralling experience, not unlike the sections in Metroid Fusion in which Samus was forced to contend with her X-Parasite impostor. After navigating the lower level of the Space Pirate’s base, Samus finds herself in some old, dilapidated remainders of the Chozo civilization that raised her. Players get to see flashbacks to Samus’ childhood in the loving care of the Chozo, fleshing out a section of the bounty hunter’s past only hinted at before. So, not only does Zero Mission create compelling gameplay reasons to revisit the original Metroid‘s spot in the timeline, it adds to the story of the series as a whole.

After a neat Chozo Guardian Boss fight, the huntress regains her armor, with the added power of a plasma beam. This moment is a perfect microcosm of the spirit of Metroid: going from weak to strong. That idea is taken to its logical extreme here as, within the span of fifteen minutes, players go from hiding from their foes, outright combat equating instant death, to being an overpowered killing machine. A quick, murderous spell in the space pirate’s ship leads to Mecha-Ridley, the game’s true final boss and a fun visual throwback to the GameCube’s Metroid Prime. The fight was, in my experience at least, quite the challenge, but certainly satisfying to complete. Once Mecha-Ridley has been reduced to scrap-metal, we get a second escape scene and a surprisingly brutal ending, as Samus mows down some Space Pirates in the hangar using one of their own spacecraft. I probably should not have laughed as hard as I did when I was treated to that sight.

In summation, Metroid Zero Mission went above and beyond the call of a remake and delivered a game that, though short, is perhaps the most condensed dose of Metroid goodness available. Even though Super Metroid will forever remain my favorite game in the series, Zero Mission is the one that I believe represents all of the highlights of the franchise the best.

Agree? Disagree? Feel ambivalent? Whatever your thoughts, feel free to leave them in the comments.

Editor’s Note: This article was originally published on August 12, 2016.

I'm a musician, writer, gamer, and builder of things who enjoys fusing those passions together whenever possible. I hold a particular fondness for Metroid, Metal Gear, and JRPGs, but I'll play anything that's fun.