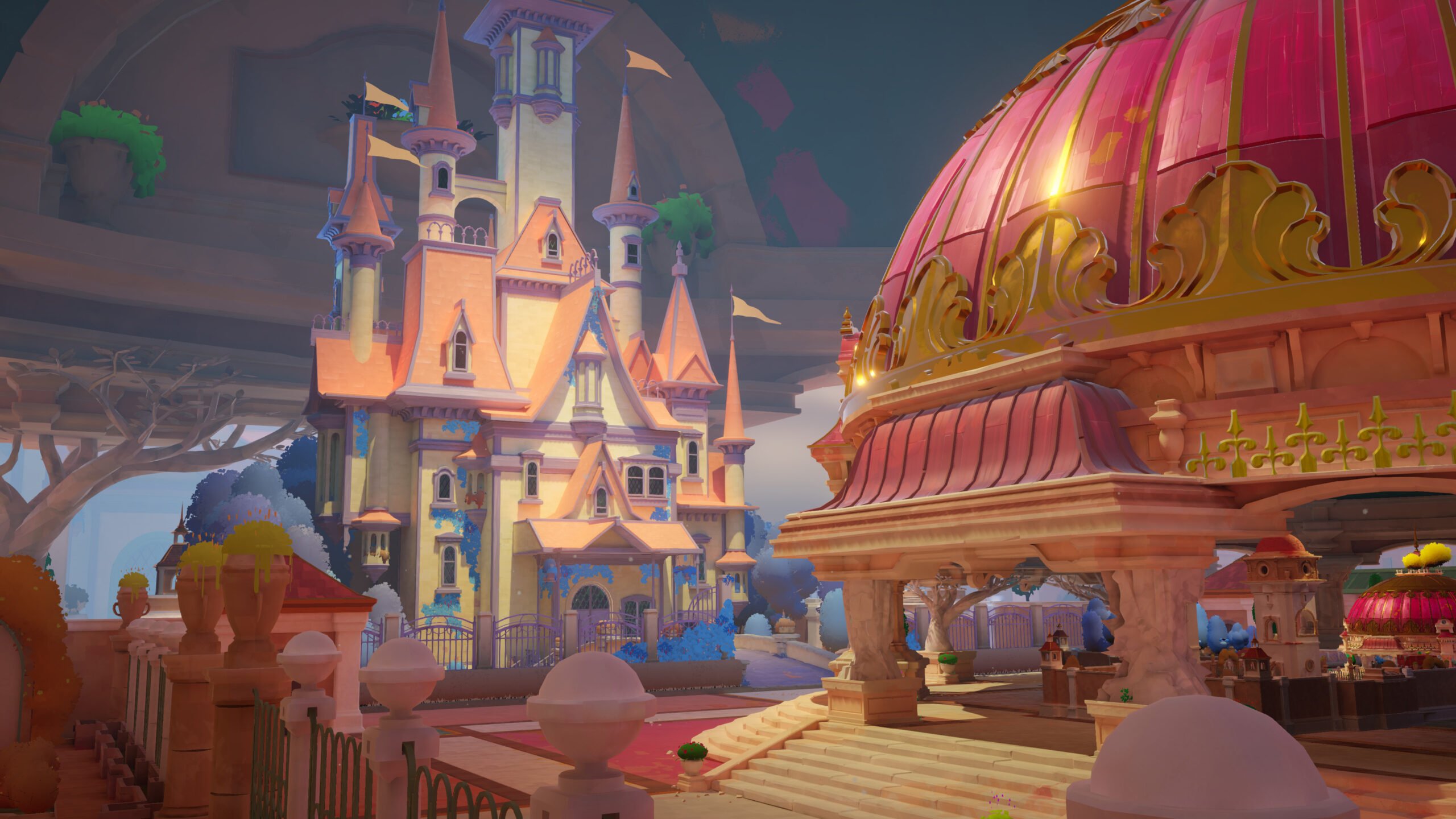 Maquette, a new puzzle game developed by Graceful Decay, shares much in common with other classics published by Annapurna Interactive like Outer Wilds and What Remains of Edith Finch. The game is a first-person puzzler with a heavy emphasis on narrative. And while Maquette may not quite reach the refined greatness of its forebears, it’s a profound work of art that will enthrall any gamer looking for a mature, meditative experience.

Maquette tells a simple love story, recounting the ups and downs of a relationship between two ordinary people, Kenzie and Michael. The game begins with one of them (or perhaps both – it is never explained) finding ephemera from their time together. From there, the game is a journey through memories. Players engage with mundane objects that hold significance to the couple as story beats play out in two fashions: voiceless musings projected onto the environment and cutscenes that depict key moments in the couple’s relationship.

The story is sparse by itself, but it feels true to the context. As they are memories brought about through recollection, this isn’t a linear narrative. As such, we never get to see the intricacies of Kenzie or Michael. We only know them through their most treasured interactions, meaning we never become invested with them as individuals. However, their journey still feels real with bonding occurring over trivial interests and fights breaking out over petty disagreements. The acting is also effective, with each line delivered with sincerity by the Hollywood cast. Bryce Dallas Howard voices Kenzie and Seth Gabel plays Michael.

While the narrative alone may not compel, it combines wonderfully with the gameplay. In Maquette, players exist in what the developers call a “recursive world.” There is a miniature model, a maquette, of the player’s environment. The model is an exact replica and any changes to it are reflected on a larger scale in the player’s world. The game does make use of this devilish concept with some truly gratifying puzzles, but, unfortunately, it still feels underutilized. In the end, Maquette contains only a few puzzles over the course of its brief 3-4 hour run time.

The true brilliance of Maquette’s mechanics is found not in immediate gratification but in how well they mesh with the narrative’s conceit. Players are living out an abstraction of someone reminiscing about a past love. The act of manipulating mundane objects mirrors the emotional significance put onto them as tiny things become grand in their implications. Furthermore, the entire setup plays on player perception. Everything in the game hinges on the way we see things – which is an apt metaphor for relationships themselves as no matter how close we become, we are always trapped in our own universe of sense experience. Maquette reinforces this isolating truth by portraying an infinite number of maquettes. The area players reside in is itself a miniature of a larger world and some of the best puzzles involve entering that giant environment. When doing so, it’s possible to see that beyond the looming walls exists even larger renditions of your maquette – no matter how far you go, you always return to yourself.

Impressively, the puzzles evolve over the course of the Maquette, coming to be about more than manipulating a model. For instance, one puzzle later in the game involves tinkering with a series of keys as the voiceless protagonist(s) ponders if they are actually are a “good fir” for one another. The player must alter the keys’ size to make one that perfectly fits the lock hindering progress. It would be on the nose, except that the solution is not the obvious one, instead reinforcing the game’s astute observations of perception and reality.

Maquette’s harmony between design and theme carries over into the presentation as the game sports striking graphics that feel hand-crafted in their simplicity. Everything appears as though it came out of a model set – even leaves look like construction paper. The most striking parts of the visual presentation are the cut-scenes which play out as illustrations from the couple’s shared sketchbook. Often beginning with a black screen, each dialogue sequence unfolds as an artistic rendition of it is drawn. For example, one of the couple’s most treasured memories is of them painting in the park. So, the sketch depicts a canvas bursting with life as vines and flowers grow out of it. Beautiful and inherently touching, they effectively imply the depth of the connection we only get glimpses of.

Special mention must given to Maquette’s soundtrack, which is, undoubtedly, one of the best ever made (yeah, I said it). Made up of nine songs composed by independent folk and rock artists, each song hits at exactly the right time with moving emotional significance. The track “Tidal Waves,” by Meredith Edgar, is particularly brilliant, simultaneously capturing the excitement of a new relationship and the lingering hurt that could be left in its wake. Equal parts haunting and cheery, the soundtrack effortlessly evokes the complex emotions found in human relationships and does so with groovy beats that would be at home on any classic rock vinyl.

While Maquette succeeds artistically, it does falter at times due to clunky design. The game’s physics are rigid and get in the way of some solutions. There were times where solving a puzzle depended on two items interacting in a manner the game had implied was impossible, making finding the answer needlessly taxing. Also, Maquette isn’t clear on how its core mechanics work. This can be satisfying, as your understanding evolves the more you experiment, but it also impedes progression, depending on you stumbling across the right discoveries.

Despite being a bit rough around the edges, Maquette is profoundly worthwhile and a true gestalt experience. The gameplay is generally simple and the sparse story alone is not compelling, but, together, they harmonize and transcend their individual parts. Maquette reminds us that great art flows fluidly as a singular experience, channeling truth about our existence. Life is fleeting and full of transient wonders that remind us how special we are, each of us in our own miniature universe. Maquette is such a wonder.